Julian Assange has been charged in the US with 17 violations of the Espionage Act for conspiring with Chelsea Manning.

A federal grand jury returned the indictment against him in Virginia on Thursday afternoon. Now, the 47-year-old WikiLeaks founder faces 170 years behind bars.

Seventeen of the 18 charges are violations of the Espionage Act.

The 18th charge is conspiracy to commit computer intrusion which he was hit with in April.

It’s the first time in history that anyone operating in a journalistic capacity has been charged under the Espionage Act and raises concerns about First Amendment limits and protections for publishing classified information.

WikiLeaks on Twitter called Assange’s prosecution ‘the end of national security journalism and the First Amendment’. 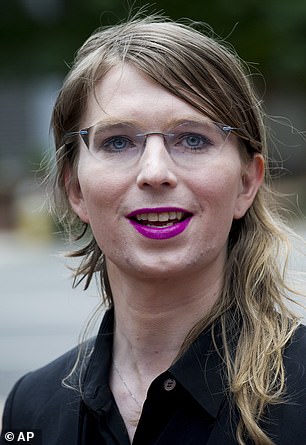 Wikileaks co-founder Julian Assange, in a prison van, as he leaves Southwark Crown Court in London on May 1. He is now facing charges in the US

Congress shall make no law respecting an establishment of religion, or prohibiting the free exercise thereof; or abridging the freedom of speech, or of the press; or the right of the people peaceably to assemble, and to petition the Government for a redress of grievances.

WikiLeaks editor-in-chief Kristinn Hrafnsson said in a tweet: ‘I find no satisfaction in saying “I told you so” to those who for 9 years have scorned us for warning this moment would come.

‘I care for journalism. If you share my feeling you take a stand NOW. Either you are a worthless coward or you defend Assange, WikiLeaks and Journalism.’

The US has until June 11 to submit its case to the UK for it to extradite Assange.

Then, the process could take months or even years. Sweden is also appealing for him to return there to face sexual assault allegations.

After announcing the charges on Thursday, John Demers, the head of the Justice Department’s National Security Division, told reporters: ‘Assange is no journalist’.

Assange is in London, fighting extradition to the US, after being expelled from the Ecuadorian embassy.

He is completing a 50 week jail sentence in the UK for violating bail conditions for his Swedish sexual assault arrest.

Assange fled to London, taking asylum in the Ecuadorian embassy, in 2012.

Together, US prosecutors say he revealed the names of intelligence sources in Afghanistan, China, Iran, Iraq and Syria among other breaches by uploading a haul of information to WikiLeaks that Manning had access to.

In its announcement on Thursday, the US Attorney’s Office for the Eastern District of Virginia said: ‘In late 2009, Assange and WikiLeaks actively solicited United States classified information, including by publishing a list of “Most Wanted Leaks” that sought, among other things, classified documents.

Last month, Manning was put behind bars for contempt of court for not agreeing to testify against Assange before a grand jury.

She refused, saying she did not believe in the secrecy of the process.

She was released but was sent back again after saying she would rather ‘starve’ than testify against him.

In April, Assange was dramatically dragged from the Ecuadorian embassy in Knightsbridge, central London, some seven years after he sought political asylum after the documents were published.

He is currently fighting against extradition to the US.

US authorities allege the whistleblower conspired with Manning, 31, ‘with reason to believe that the information was to be used to the injury of the United States or the advantage of a foreign nation’.

Assange published the documents on WikiLeaks with unredacted names of sources who gave information to US forces in Iraq and Afghanistan.

‘According to the superseding indictment, Assange’s actions risked serious harm to United States national security to the benefit of our adversaries and put the unredacted named human sources at a grave and imminent risk of serious physical harm and/or arbitrary detention.’

It added: ‘Many of these documents were classified at the Secret level, meaning that their unauthorised disclosure could cause serious damage to United States national security.’

Classified rules of engagement files for the Iraq war were also handed over by Manning, US officials said, and Assange is said to have agreed to hack into secure government networks.

‘Assange is also charged with conspiracy to commit computer intrusion for agreeing to crack that password hash.’

He faces a maximum of 10 years in prison for each count except conspiracy to commit computer intrusion, which is punishable by five years.

The new charges further complicate the extradition tug of war between the US and Sweden, both of which want Assange back to prosecute but neither of which has filed a formal request for it.

In Sweden, there is a sexual assault case statute of limitations which means the case must be prosecuted by 2020 if he is to face trial.

It remains unclear whether the UK will chose to send him there or to the US.

Julian Assange’s fight for freedom: A timeline of the WikiLeaks founder’s decade in the limelight

Assange creates Wikileaks with a group of like-minded activists and IT experts to provide a secure way for whistleblowers to leak information. He quickly becomes its figurehead and a lightning rod for criticism.

July: Wikileaks starts releasing tens of thousands of top secrets documents, including a video of U.S. helicopter pilots gunning down 12 civilians in Baghdad in 2007.  What followed was the release of more than 90,000 classified US military files from the Afghan war and 400,000 from Iraq that included the names of informants.

August: Two Swedish women claim that they each had consensual sex with Assange in separate instances when he was on a 10-day trip to Stockholm. They allege the sex became non-consensual when Assange refused to wear a condom.

First woman claims Assange was staying at her apartment in Stockholm when he ripped off her clothes. She told police that when she realized Assange was trying to have unprotected sex with her, she demanded he use a condom. She claims he ripped the condom before having sex.

Second Swedish woman claims she had sex with Assange at her apartment in Stockholm and she made him wear a condom. She alleges that she later woke up to find Assange having unprotected sex with her.

He was questioned by police in Stockholm and denied the allegations. Assange was granted permission by Swedish authorities to fly back to the U.K.

November: A Swedish court ruled that the investigation should be reopened and Assange should be detained for questioning on suspicion of rape, sexual molestation and unlawful coercion. An international arrest warrant is issued by Swedish police through Interpol.

Wikileaks releases its cache of more than 250,000 U.S. diplomatic cables.

December: Assange presents himself to London police and appears at an extradition hearing where he is remanded in custody. Assange is granted conditional bail at the High Court in London after his supporters pay £240,000 in cash and sureties.

February: A British judge rules Assange should be extradited to Sweden but Wikileaks found vows to fight the decision.

April:  A cache of classified U.S. military documents is released by Wikileaks, including intelligence assessments on nearly all of the 779 people who are detained at the Guantanamo Bay prison in Cuba.

November: Assange loses High Court appeal against the decision to extradite him.

June: Assange tells a group of journalists he will not leave the embassy even if sex charges against him are dropped out of fear he will be extradited to the U.S.

November: Assange is questioned over the sex allegation at the Ecuadorian Embassy in the presence of Sweden’s assistant prosecutor Ingrid Isgren and police inspector Cecilia Redell. The interview spans two days.

April: Lenin Moreno becomes the new president of Ecuador who was known to want to improve diplomatic relations between his country and the U.S.

May: An investigation into a sex allegation against Assange is suddenly dropped by Swedish prosecutors.

January: Ecuador confirms it has granted citizenship to Assange following his request.

March: The Ecuadorian Embassy suspends Assange’s internet access because he wasn’t complying with a promise he made the previous year to ‘not send messages which entailed interference in relation to other states’.

August: U.S. Senate committee asks to interview Assange as part of their investigation into alleged Russian interference in the 2016 election.

September: Assange steps down as editor of WikiLeaks.

October: Assange reveals he will launch legal action against the government of Ecuador, accusing it of violating his ‘fundamental rights and freedoms’.

November: U.S. Justice Department inadvertently names Assange in a court document that says he has been charged in secret.

April 6: WikiLeaks tweets that a high level Ecuadorian source has told them Assange will be expelled from the embassy within ‘hours or days’. But a senior Ecuadorian official says no decision has been made to remove him from the London building.

April 11: Assange has his diplomatic asylum revoked by Ecuador.

May 23: Assange is hit with 18 counts by a federal grand jury in Virginia