Julian Assange WINS right to seek an appeal over US extradition at Supreme Court: High Court judge rules WikiLeaks founder can fight decision to send him to America where he faces 175-year jail term if found guilty of hacking charges

Julian Assange today won the right to seek to appeal his extradition to the US in the Supreme Court – meaning he can continue to fight the decision to send him to America where he could be sentenced to 175 years in prison.

Assange, 50, is wanted in America for allegedly conspiring to hack a secret Pentagon computer network to obtain hundreds of thousands of files relating to the Afghanistan and Iraq wars.

In December last year, the US won a High Court challenge to overturn a ruling that Assange should not be extradited due to a real and ‘oppressive’ risk of suicide, after officials vowed he would not be kept in ‘restrictive’ conditions.

But in an attempt to scupper his extradition, Assange’s lawyers argued the case raised a point in law of ‘general public importance’ so should be considered by the UK’s most senior judges.

Today, Lord Chief Justice Lord Burnett and Lord Justice Holroyde accepted there could be a point in law that needs looking at, but it would be up to the Supreme Court justices themselves to decide whether they wanted to take the case.

Assange, 50, is wanted in America over an alleged conspiracy following WikiLeaks’ publication of hundreds of thousands of leaked documents

Assange’s fiancee, Stella Moris, and his lawyers, Birnberg Peirce Solicitors, said the High Court’s earlier decision was overly reliant on assurances given by the US about the prison conditions he would face if extradited.

Assange has been held at the high-security Belmarsh Prison in London since 2019, when he was arrested for skipping bail during a separate legal battle.

Before that, he spent seven years holed up inside Ecuador’s Embassy in London, after seeking diplomatic protection in 2012 to avoid extradition to Sweden to face allegations of rape and sexual assault.

Sweden dropped the sex crimes investigations in November 2019 because so much time had elapsed. 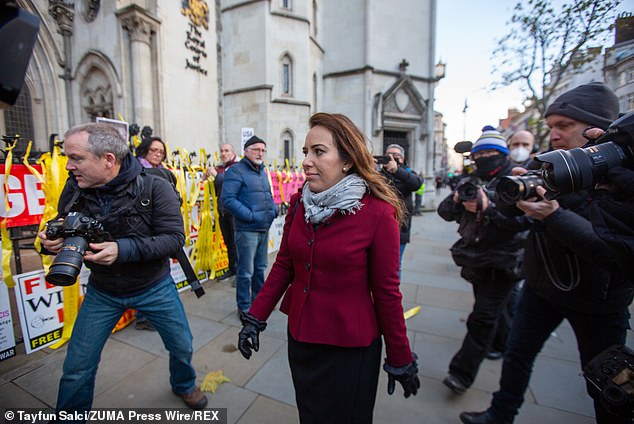 Assange’s fiancee, Stella Moris, argues the WikiLeaks founder will be a suicide risk if he is extradited to the US

Lawyers for Assange argue that their client shouldn’t have been charged because he was acting as a journalist and is protected by the First Amendment of the US Constitution that guarantees freedom of the press.

They say the documents he published exposed US military wrongdoing in Iraq and Afghanistan.