‘It is Leipzig against Tottenham, not Mourinho v Baby Mourinho’: Julian Nagelsmann insists Champions League clash is about the action on the pitch and not the men on the touchline

RB Leipzig head coach Julian Nagelsmann insists his side’s Champions League clash with Jose Mourinho’s Tottenham is not the master versus the apprentice.

Nagelsmann, 32, was dubbed ‘Baby Mourinho’ after making early waves as a coach, having to give up playing while still a teenager due to injury.

He became the Bundesliga’s youngest ever manager aged 28 when he took over at Hoffenheim in 2016 and is widely regarded as one of European football’s up-and-coming coaches.

Wednesday’s last-16 first leg at the Tottenham Hotspur Stadium will be his – and Leipzig’s first taste of a knockout game in the Champions League, something that Mourinho is an old hat at.

The Portuguese has won the competition twice, which means Nagelsmann is full of respect for him, but says the tie is not about them.

‘It is only a game between Leipzig and Tottenham. Eight years ago Tim Weise called me Baby Mourinho, but that was only for two weeks. After that he called me Julian again.

‘Tomorrow it is Leipzig against Tottenham, not Mourinho v Baby Mourinho.

‘I have great respect for Mourinho. He has won lots of titles with big clubs, the Champions League twice.

‘He has made his mark on European football at some big European clubs. I think it his 59th knockout game in the Champions League and it is my first so there is obviously respect there.’ 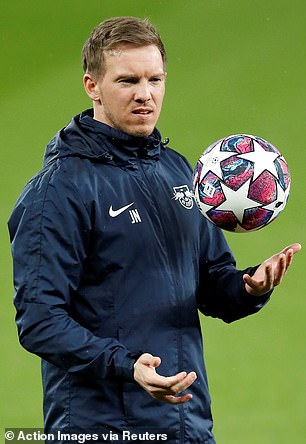 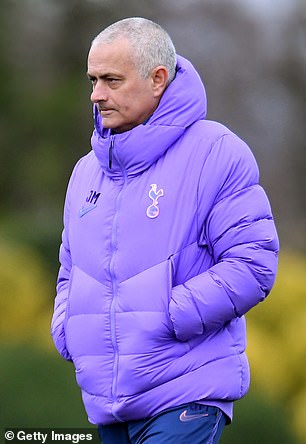 Nagelsmann, 32, was dubbed ‘Baby Mourinho’ in the early stages of his coaching career

If speculation were to be believed, Nagelsmann might have been in the Spurs dugout for the game as he was linked to the club in the final stages of Mauricio Pochettino’s reign.

He did not say much on the matter, only to deny it.

Asked whether he came close to joining Spurs last November, he said: ‘Me? No.’

Nagelsmann insists his side will not change their plans following Tuesday’s news that Son Heung-min will be missing for Spurs.

The South Korean might not play again this season as he requires surgery on a broken arm, but that will not affect Leipzig’s plans.

‘I am not changing anything, we are not going to change a plan because of one player,’ the head coach said. ‘I hope his operation is good and he is back soon. 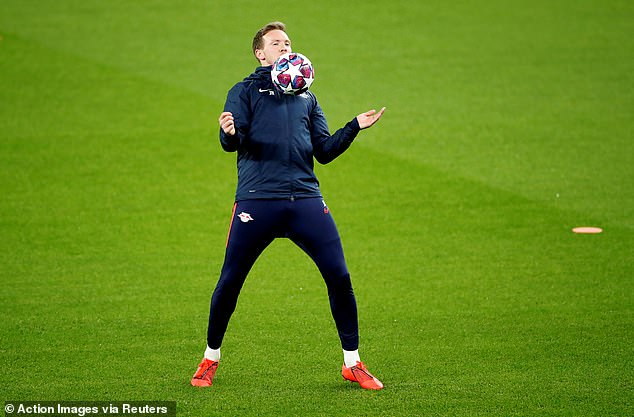 ‘But it is a shame when a top player is missing from a game like this. It means there is one less great player. Tottenham have a number of players out but we do as well.

‘These things happen, we have a couple of injuries we have to deal with. We need to be solid against Tottenham and match them. He has played an important role in recent games.

‘We prepared for Tottenham in detail, it doesn’t matter if (Harry) Kane or Son don’t play.

‘For Tottenham it would be better if they play but it is better for us if they don’t play.

‘We have prepared and told the team the plan this morning so we will not change the plan.’

Leipzig have injury concerns of their own as Ibrahima Konate, Willi Orban, Kevin Kampl and Tyler Adams are all injury while Dayot Upamecano is suspended.