Sold under The Jills and Zeder Group, the waterfront property spans 1.8 acres on the small private island of Indian Creek in Miami’s Biscayne Bay.

The island, found off the coast of Miami, got the nickname ‘Billionaire Bunker’ because of the high-profile residents that have settled onto the island, including model Adriana Lima and billionaire businessman Carl Icahn of New York City. Former Miami Dolphins coach Don Shula, who died earlier this month, also had property there.

Singer Julio Iglesias, 76, is selling an empty, 1.8-acre plot of land located on Miami’s exclusive Indian Creek island (pictured) for nearly $32million, according to The Jills and Zeder Group 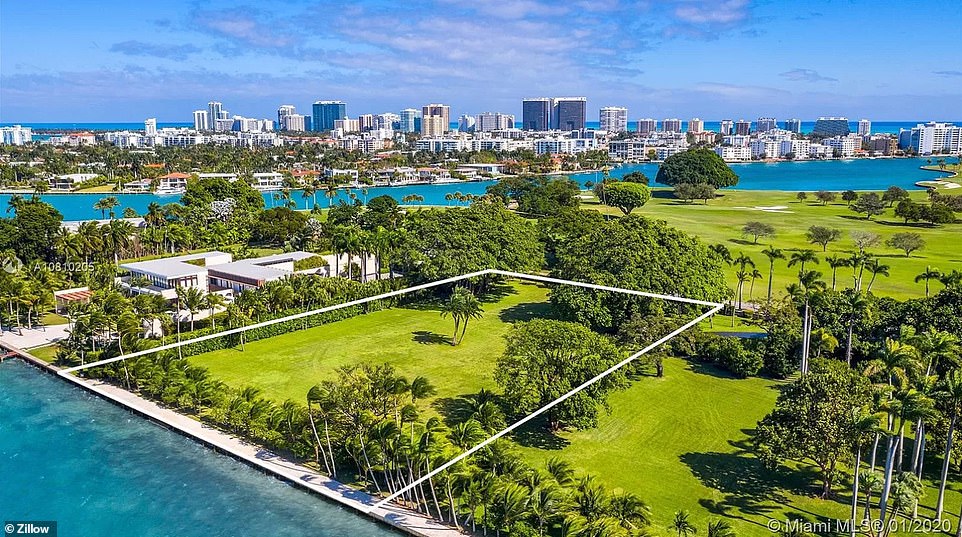 Indian Creek, located off the coast from Miami, Florida, received the nickname ‘Billionaire Bunker’ because of the many high profile residents who live there, including model Adriana Lima 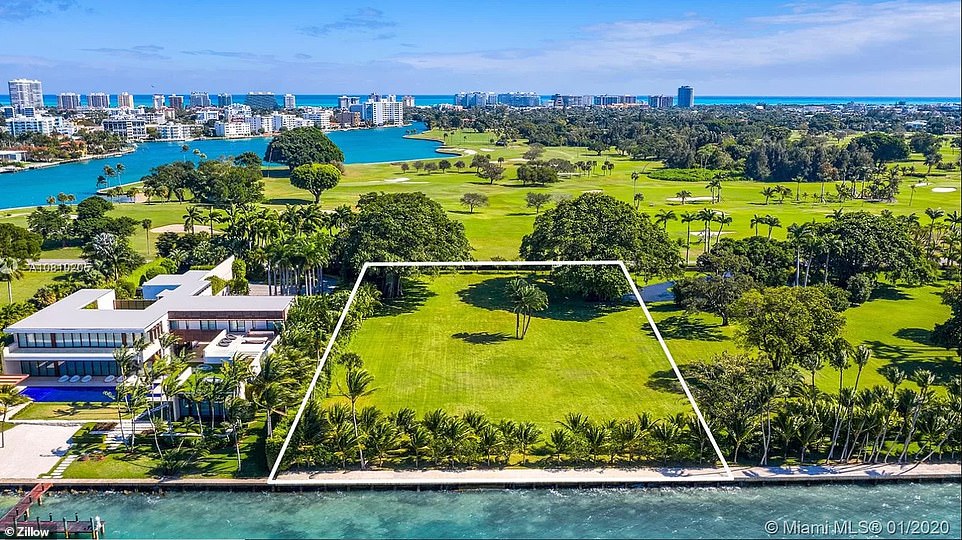 Iglesias’ property spans 80,000 square feet and has 200 feet of waterfront property, which is consistent throughout the island as homes are built on the perimeter to ensure each resident has a view of the ocean 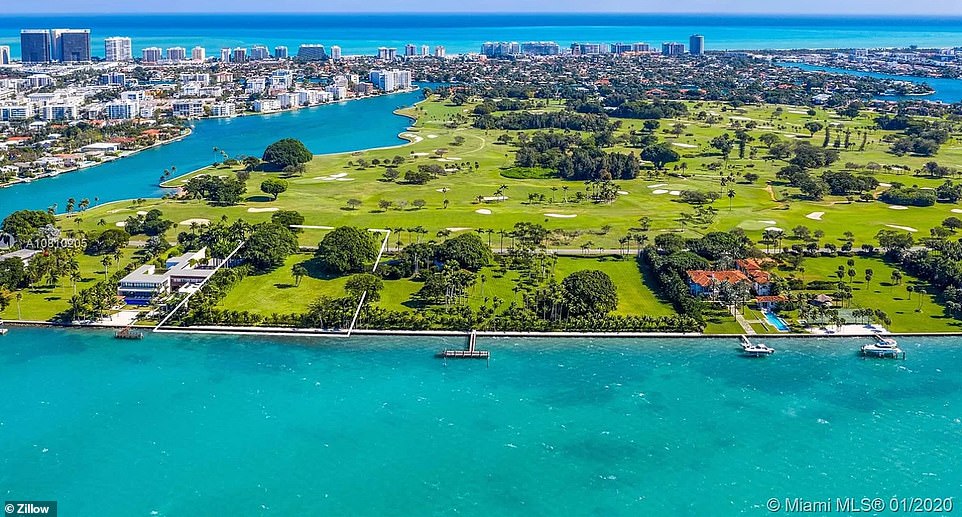 Iglesias first bought two properties on Billionaire Bunker in 1978, before buying three neighboring lots over the years and, eventually, attempting to sell a group of empty lots for $150million

Iglesias, 76, initially bought two plots of land on Indian Creek in 1978 and then secured three other nearby lots over the years, according to Forbes and Business Insider.

He tried to sell that four empty lots that cover eight acres of land as a group for $150million A fifth plot has a home where Iglesias lives a few months out of the year.

‘I invest a lot of time, a lot of my salary in real estate all over the world. I didn’t make any mistakes, fortunately,’ said Iglesias, whose 1983 album ‘Julio’ was the first foreign language album to sell more than two million copies in the United States. 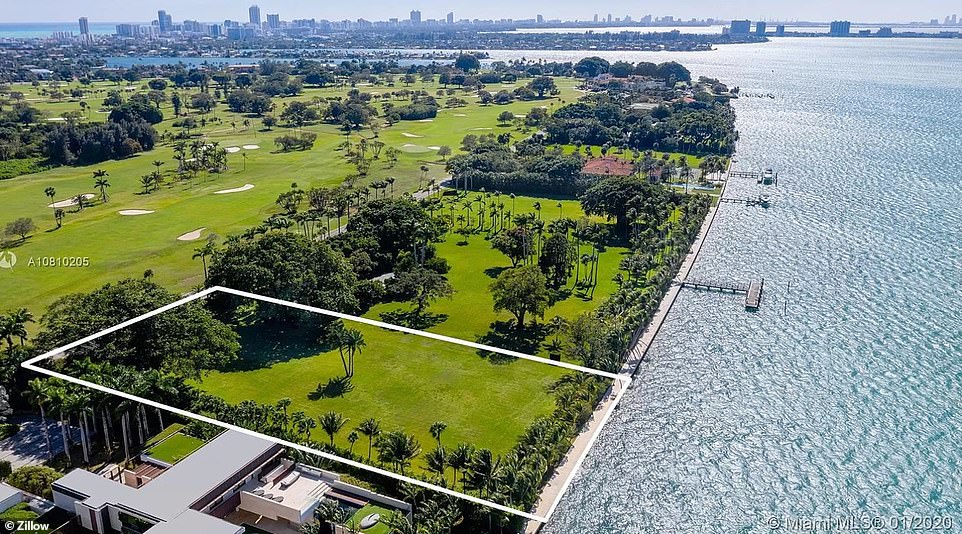 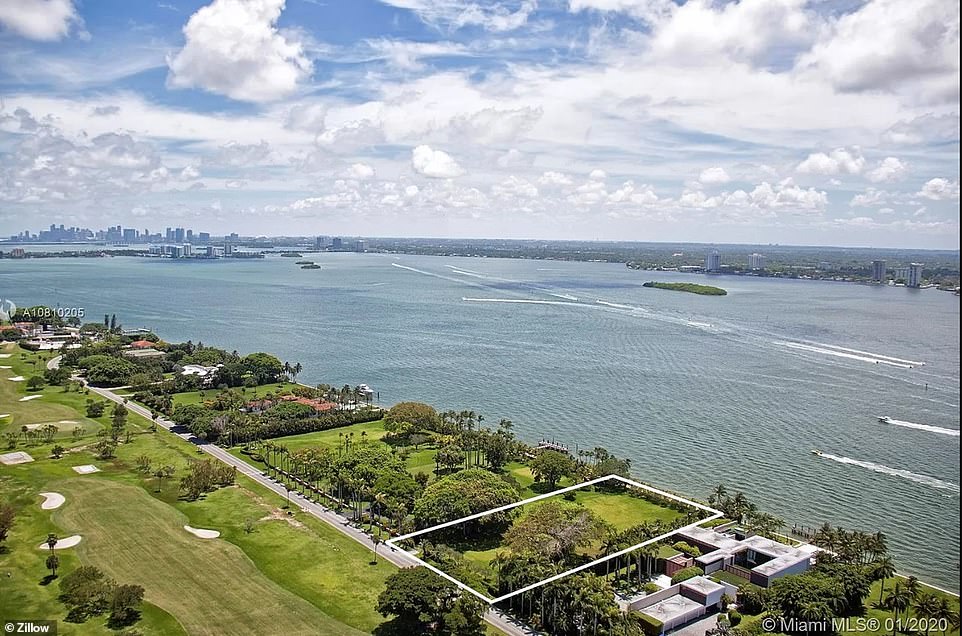 Jill Eber: ‘Mr. Iglesias listed lots four, five, six and seven in 2017. The reality is that there are very few buyers for a sale that large. ‘The properties came off the market in 2018 and at this time Mr. Iglesias only wants to list for sale 4 Indian Creek Island Road’ 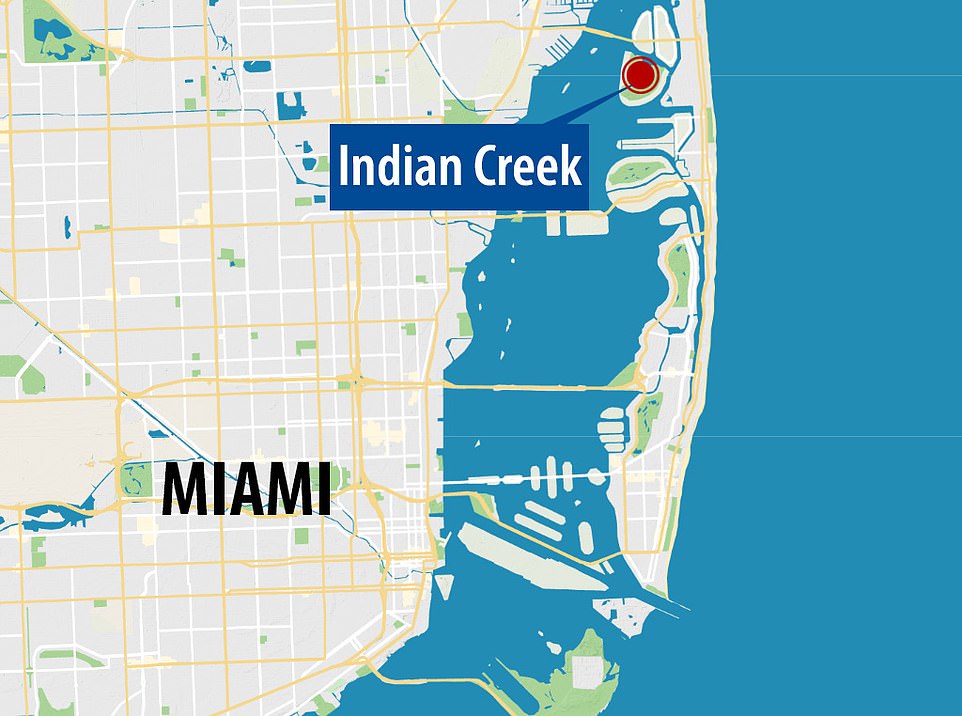 Pictured: Indian Creek, also known as ‘Billionaire Bunker’, is found about 30 minutes off the coast of Miami, Florida

Listing agent Jill Eber told the Miami Herald:  ‘Mr. Iglesias listed lots four, five, six and seven in 2017. The reality is that there are very few buyers for a sale that large.

‘The properties came off the market in 2018 and at this time Mr. Iglesias only wants to list for sale 4 Indian Creek Island Road.’

Iglesias’ property spans an impressive 80,000 square feet and has 200 feet of private waterfront.

Indian Creek Village holds the reputation as ‘the world’s most exclusive municipality.’ The island has only 34 homes, around 42 residents and its own private 13-person police force.

The local authorities run patrols around the island on land and an around-the-clock armed marine patrol supervises the waters surrounding the island.

Each home on Indian Creek is built around the perimeter of the island to ensure that all residents have a waterfront view, while the middle is occupied with the luxurious Indian Creek Country Club and a 18-hole golf course.

The island’s promise of security and privacy are what help attract such wealthy homeowners.

Indian Creek is only accessible by a single bridge that is guarded by a gatehouse and for every three residents there is one police officer. 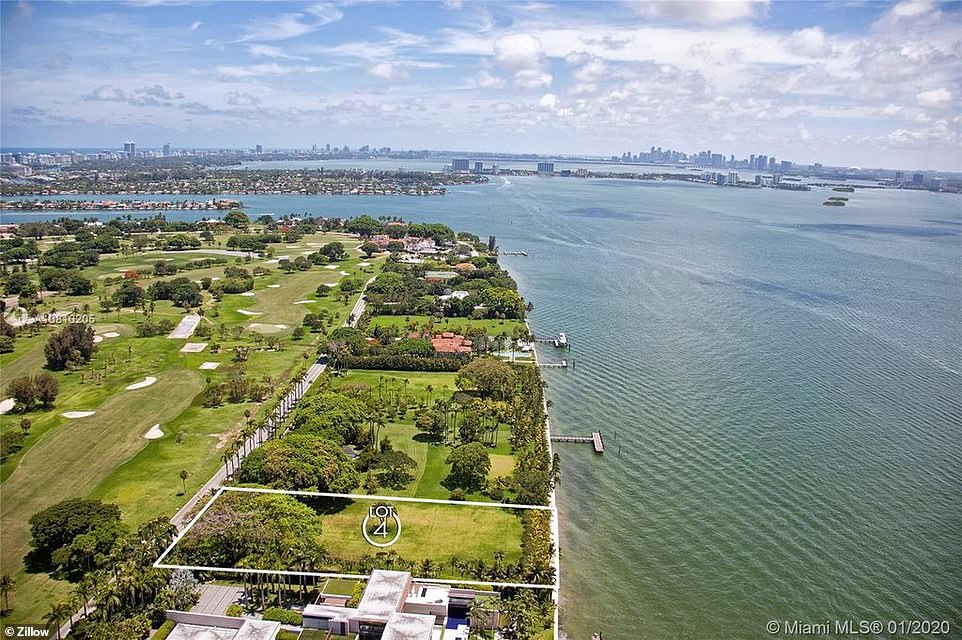 Indian Creek can only be reached by a single roadway and is protected by a 13-person police force that patrols the island by land and sea. There is one police officer for every three residents 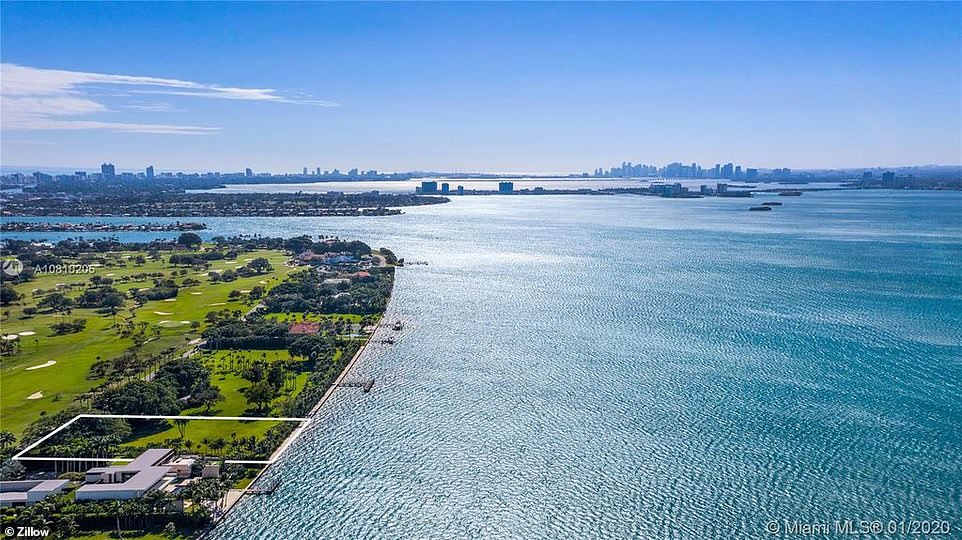 Indian Creek Village holds the reputation as ‘the world’s most exclusive municipality,’ with the island only containing 34 homes and around 42 residents who escape to the area for privacy 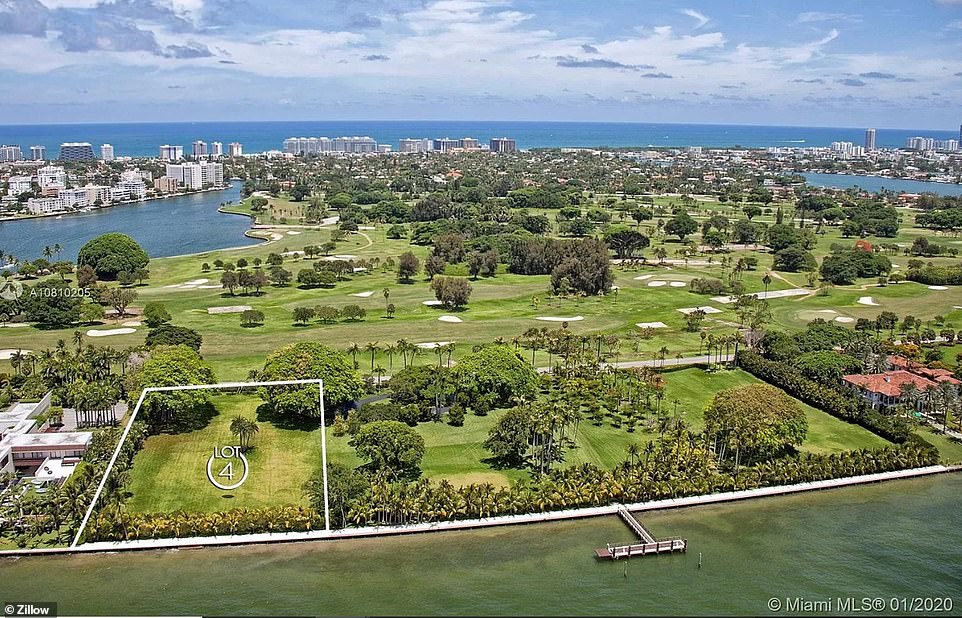 Home sales on Indian Creek are rare and, at the moment, only Iglesias’ property is on the market after basketball coach Rick Pitino sold his eight-bedroom, Mediterranean mansion for $17million in April

The majority of homes are nestled behind gates and foliage, and Indian Creek only has one roadway throughout the island.

Home sales on the island are rare – with Iglesias’ property the only item for sale right now – but the price tags are sure to be extraordinary.

An Indian Creek property not officially on the market sold for $50million in 2019, breaking the record for the most expensive single-family home sold in the Miami area, according to Business Insider.

It was the second time the home broke the record after selling for $47million in 2012.

In 2018, an empty lot of land similar to Iglesias’ property sold for a remarkable $27.5million.