Junior doctor Phil Sesemann finishes SEVENTH in the London Marathon, with the unsponsored British athlete the leading finisher from outside of Ethiopia and Kenya

After months spent following the paw prints of two famous names, a junior doctor from Leeds burst from obscurity to finish seventh in the London Marathon on Sunday.

In a quite stunning performance, Phil Sesemann, who by his own description is an ‘unsponsored, occasional distance athlete’, was the leading finisher from outside of Ethiopia and Kenya.

Contesting his very first marathon, and on his 29th birthday, he clocked 2:12.58, nine minutes behind the winner, Sisay Lemma of Ethiopia.

While Lemma’s victory carried a surreal edge, owing to fears he had been a contact of a Covid-positive athlete, which in turn meant he was not allowed on the podium, it was Sesemann’s tale that drew much of the interest.

That derives from his status as a part-time runner, and one who was previously best known in athletics for having competed for Britain earlier this year at the European Indoor championships, where he failed to get out of the 3,000m heats.

The bulk of his time has been spent working in the accident and emergency department at St James’s Hospital in Leeds, with his training predominantly spent alongside his dogs, Kipchoge and Haile, named after the distance greats Eliud Kipchoge and Haile Gebrselassie. 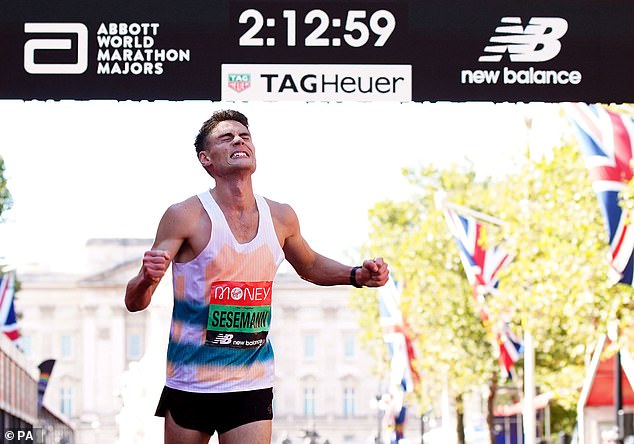 Sesemann, from Leeds, describes himself as an ‘unsponsored, occasional distance athlete’

‘It’s not a bad way to spend my birthday,’ he said. ‘About time I’ve done a marathon and given it a good go.

‘It’s been difficult combining medicine and training but I’ve worked part-time and my colleagues have been very supportive.

‘I’ve done my foundation years (in medicine), so at some point I’ll go into a training programme and decide what to specialise in. If there’s a marathon career for a few years then maybe I’ll give that a crack.’

His time qualified him for a spot at next year’s Commonwealth Games and European Championships.

Explaining the training group that has assisted his rise to those possibilities, Sesemann said: ‘Kipchoge is a spaniel cross. She is on Strava and she’s on 80-plus miles a week – she usually lags behind but is a stalwart on the Leeds training scene. Haile is a German Shorthaired Pointer. Haile came along for a little warm-up the other day and Kipchoge wasn’t too pleased.’

While Sesemann’s time was impressive, his high placing was assisted by a field that was rich in top-level elite runners but was thin beyond the six leaders. Indeed, the spots between Sesemann and 18th were all Brits.

The quality was deeper in the women’s race, where Charlotte Purdue crossed in 10th, clocking the third quickest time in history by a Brit. 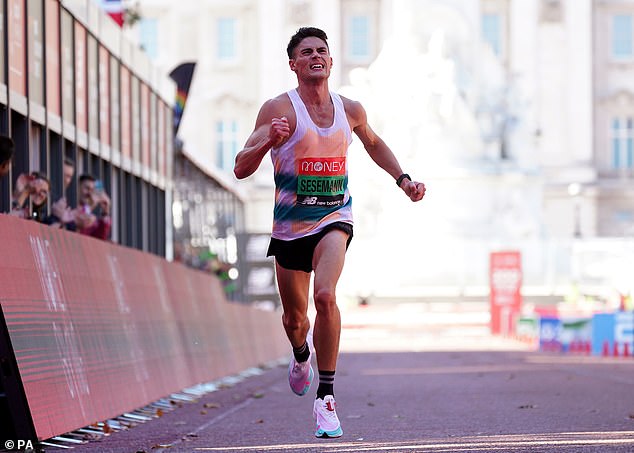 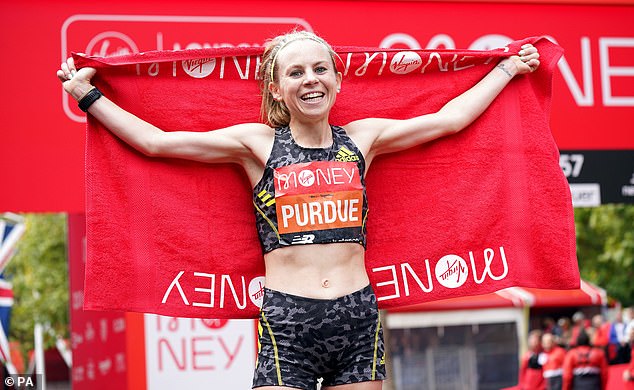 It was vindication for her claim that she should have been picked for Team GB at the Tokyo Olympics and she celebrated with a raised index finger as she crossed in 2:23.12sec. Perhaps she could have been forgiven for flashing a different digit at UK Athletics.

She said: ‘I did feel I deserved to be in Tokyo. Obviously I wasn’t selected but I put all my emphasis on this race as soon as I wasn’t. This was my Olympics.

‘The London marathon is such a special event. It is not like a B race. It is special for me to run like this in London.’

Purdue’s time qualified her for a place at next summer’s World Championships in Oregon, but she indicated she could skip it, saying: ‘Having that is good, but I don’t know if I will go to Oregon. There are the worlds, Europeans and Commonwealths. If I could maybe get a medal at the Europeans would that be better than top 10 in the worlds? I don’t know.’

The women’s race was won by Kenya’s Joyciline Jepkosgei in 2:17.43. Britain’s David Weir was third in the men’s wheelchair event.