The study findings have been dubbed ‘the Homer Simpson effect’

Fatty and sugary food such as donuts are twice as distracting as healthy snacks, even when you are not hungry, according to scientists.

Tests on volunteers found the sudden thought of food was twice as likely to conjure up a calorie-laden treat than a healthy alternative.

Some may say the findings are from the university of the extremely obvious. But interestingly, they emerged through a subliminal experiment.

Volunteers were asked to look at a screen and complete a task while pictures of healthy and unhealthy foods were flashed up so briefly that they would not consciously register them.

When they were shown fatty and sugary treats, they slowed down on the task twice as much as when they saw healthy snacks.

This has been dubbed ‘the Homer Simpson effect’ after the greedy TV cartoon character in The Simpsons, who is regularly prompted by innocuous sights or sounds to start drooling over the thought of a beer, doughnut or sandwich. 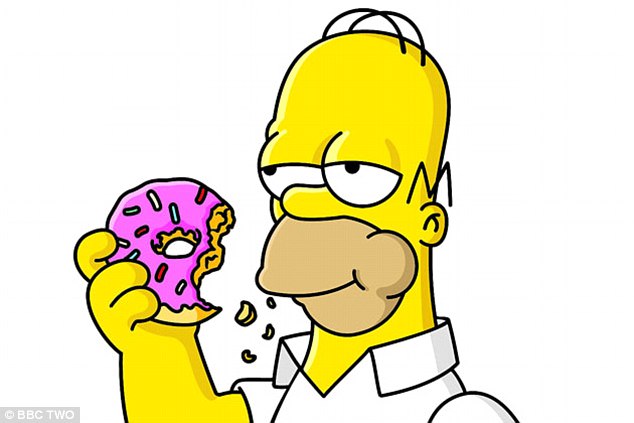 The greedy Simpsons character regularly drools over the thought of a beer, donuts or sandwich on the show

If you struggle to stop yourself reaching for bread, pasta and potatoes your taste buds could be to blame, according to research published this week.

It has long been thought we have five ‘official’ tastes: salty, sweet, sour, bitter and umami. Now food scientists have found evidence of a sixth: for carbohydrates.

People who were most sensitive to the taste of starch ate more of these foods and had a larger waist, which may explain why some people are more likely to be obese.

Experts have presumed the craving for carbohydrates is driven by the sugar fix they provide.

But researchers from Deakin University in Australia believe some people can directly detect the taste of starch.

‘We specifically looked at waist measurements, as they are a good measure of the risk of dietary related diseases,’ said researcher Julia Low.

‘Those who were most sensitive to the carbohydrate taste ate more of these foods and had a larger waist.’

In an experiment for the specialist journal Psychonomic Bulletin and Review, psychologists from Johns Hopkins University in Baltimore looked at the reactions of 18 volunteers to images on a screen.

They weer showed a series of images of either numbers or letters which they were asked to put in order as the process developed.

During each presentation, a random photo would flash up on the edge of the screen but too quickly for the volunteers to completely register what it was.

These images included sweet toothed delights such as cake and chocolate or a hot dog or crisps, healthier snacks such as carrots, apples and salad or non-food objects such as a bike or lava lamp.

By monitoring the responses and reactions of those taking part they found that every time an image flashed, the volunteers slowed down.

But they slowed down twice as much when the unhealthy food flashed before them than when either the healthy treats or the non-food related objects were shown.

Researcher Corbin Cunningham said: ‘We wanted to see if pictures of food, particularly high-fat, high-calorie food, would be a distraction for people engaged in a complicated task.

‘But when we showed them chocolate cake and hot dogs, these things slowed them down about twice as much.’

Follow up experiments showed that volunteers were more distracted by the fatty snacks if they were hungry and notably less distracted if they had eaten a chocolate bar beforehand.