It has been a tough 18 months for investors in stock market-listed fund Jupiter Emerging & Frontier Income. The trust’s share price fell sharply as the pandemic struck, from a high of £1.12 in January 2020 to below 70p in late March. To compound the shareholder misery, the quarterly dividend was cut from 1.2p a share to 1p.

Yet there are now signs that the worst is over for shareholders. The trust’s share price is back above its £1 launch price in May 2017 while fund manager Ross Teverson is confident that at some stage in the near future, the dividend can be tickled up again.

‘The revenue picture for the trust has improved as the impact of Covid on companies and markets has waned,’ he says. ‘I anticipate growth in dividend payments.’

As its name implies, the £65million trust invests in companies listed on some of the world’s emerging stock markets such as China, India and South Korea. Yet it also seeks out opportunities in some of the globe’s developing countries that, in stock market and economic terms, are considered too embryonic to be described as ’emerging’ – hence the ‘frontier’ label.

Currently, some 15 per cent of the trust’s assets are classed as frontier and Teverson believes such companies provide the opportunity for investors to make good long-term profits – especially given many of the businesses are poorly researched by analysts. This sometimes leads to good companies being undervalued.

‘Kenya is a classic frontier market,’ says Teverson. ‘It has a young population and there is a low penetration of financial products and consumer goods. But the economy has the potential to deliver strong long-term growth.’

The trust has a holding in KCB Bank that offers customers a full range of financial products including savings accounts, insurance and credit cards.

Another frontier holding is Romanian wine producer Purcari that has vineyards in both Romania and Moldova. ‘It’s a producer of good quality wine,’ says Teverson. ‘It’s benefiting from growing consumption in its home markets, and also from healthy exports to China.’

Although the pandemic has made it impossible for Teverson and the rest of Jupiter’s emerging markets team to visit the companies they hold, he says the management of businesses such as KCB Bank and Purcari have been keen to inform them on a regular basis how they are faring. 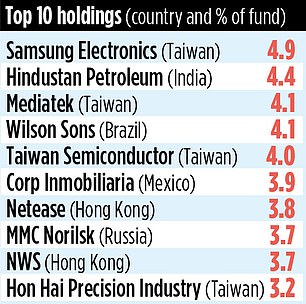 More difficult has been identifying new investment opportunities, especially in nascent industries, where the ability to do due diligence on the ground is key.

Indeed, Taiwanese-listed ‘tech enabling’ firms represent the most dominant theme in the trust. A fifth of the fund’s assets are invested in Taiwanese companies and the likes of Samsung Electronics, Mediatek, Hon Hai Precision and Taiwan Semiconductor are among the top ten holdings.

Despite the enforced dividend cuts, the trust is still offering an attractive income equivalent to more than 3.5 per cent a year. And if Teverson’s prognosis on the future for dividends is correct, payments could be on the rise sooner rather than later. The trust is invested in 45 companies across 22 stock markets.

The fund’s stock market identification code is BDR0575 and its ticker is JEFI. The annual charges total 1.35 per cent which are on the high side, but these should fall if the trust’s assets grow.