Jurgen Klopp beware, Roma have their own Egyptian king in Stephan El Shaarawy

There was no Mo-shaped threat to devastate Roma when Liverpool’s midweek opponents faced Chievo on Saturday, yet nothing should obscure an inconvenient truth.

The Italian side looked dynamic and dangerous as their very own Egyptian king underlined that he will need to be watched.

Stephan El Shaarawy is a native Italian but they call him Il Faraone (The Pharoah) in the Italian capital, because his father was born in the North African country.

Liverpool beware, Roma have their own Egyptian king in the form of Stephan El Shaarawy

The 25-year-old showed pace and vision as lowly Chievo were put to the sword in a 4-1 win which means Roma are on course for Champions League qualification again next season, even if they don’t win it this time.

El Shaarawy, an Italy international signed from Milan two years ago, has confidence to go with technique. An audacious back-heeled volley from Aleksandar Kolarov’s cross was ruled offside after a VAR referral. A beautiful right-footed effort was arced against the far upright.

And then came the sublime, stand-out moment — a run, beginning in his own half, which propelled him to Chievo’s area, saw him nutmeg substitute centre half Alessandro Gamberini and tuck home, right-footed, to make it 3-0. 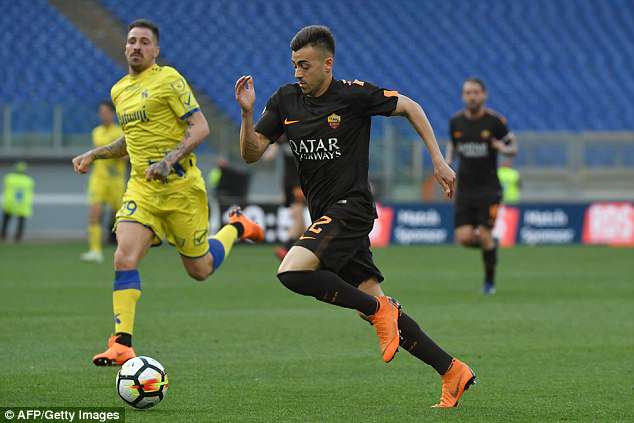 If there is one criticism of El Shaarawy it is that he is slightly one-footed. He did not use his weaker left to cross for Edin Dzeko on 36 minutes and the ball eluded the forward.

But he was a deadly adjunct to Dzeko, who left the field to an ovation after scoring twice. Roma manager Eusebio Di Francesco offered no clues about whether El Shaarawy will start on Wednesday but Kevin Strootman and Diego Perotti are both doubts.

‘We will have to make a perfect match without making mistakes,’ El Shaarawy said of the second leg. ‘A goal can cost us the final.’