Jurors at the murder trial of a former Arizona police officer were shown on Thursday body camera footage of the cop killing an unarmed man who sobbed and begged not to be shot.

It marked the first time since the January 2016 shooting of 26-year-old Daniel Shaver in Mesa that the full, unedited video has been shown in court.

The 18-minute recording aired in the murder case against Philip Brailsford shows Shaver, a married father-of-two from Granbury, Texas, laying face-down in a hallway outside his La Quinta hotel room as police responded to a call that someone was pointing a gun out of a window.

A police supervisor can be heard shouting commands at Shaver, who disobeys some of the orders but doesn’t voice any threats toward officers.

Former Mesa cop Philip Brailsford, left, and his attorney, Mike Piccarreta, stand for the jury Wednesday, at the start of Brailsford’s murder trial in the fatal shooting of Daniel Shaver 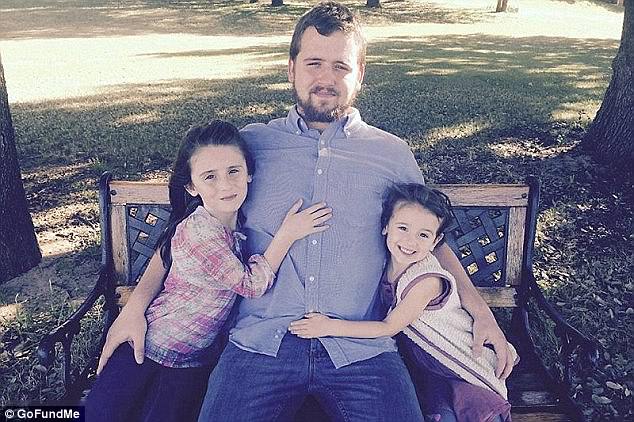 Brailsford fatally shot Daniel Shaver, a 26-year-old father-of-two (pictured with his girls), during a standoff at a Mesa, Arizona, hotel in January 2016 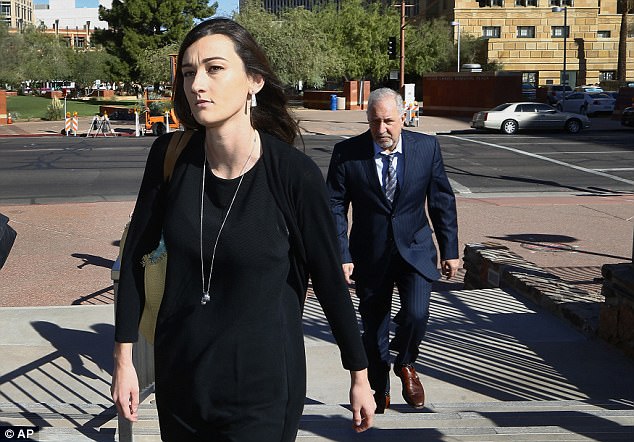 ‘Please do not shoot me,’ Shaver said.

Brailsford opened fire when Shaver, who had been ordered to crawl toward officers, reached toward the waistband of his shorts. The officer believed Shaver was reaching for a gun.

Authorities have said it looked as though Shaver was pulling up his loose-fitting basketball shorts that had fallen down as he crawled.

‘Daniel Shaver drew his last breath on his hands and knees,’ prosecutor Susie Charbel told jurors, pointing out that none of the other officers in the hallway fired a shot.

Brailsford, 26, is one of the few police officers in the US to be charged with second-degree murder after an on-duty shooting.

Brailsford attorney Michael Piccarreta told jurors his client had to make a difficult, split-second decision about protecting himself and others. 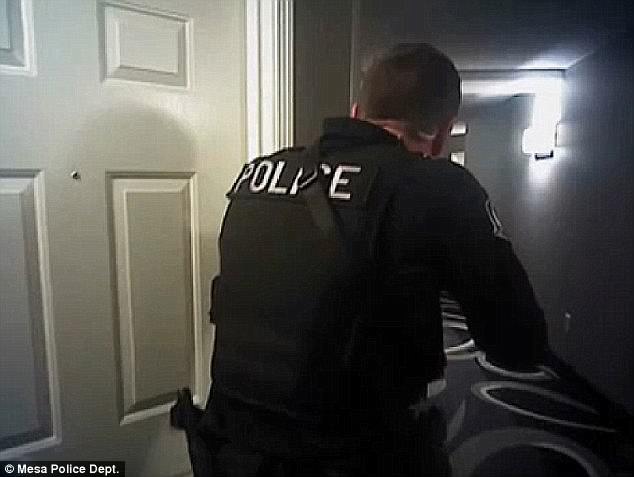 Mesa PD previously released a portion of a bodycamera video from the night of Shaver’s killing, which did not include the moment of the shooting (screengrab from the video) 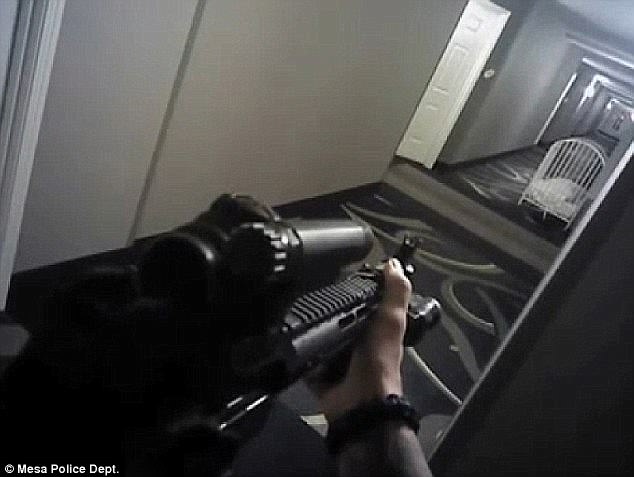 First person: This edited version of Brailsford’s video ends when someone walks out of the room

‘Mr. Shaver wasn’t going to get shot until he moves his hand behind his back,’ Piccarreta said. ‘This man was no killer, he was a first responder.’

Piccarreta also noted the dangers of the call to which officers were responding – someone pointing a rifle out of a fifth story of a hotel.

‘They have no idea who the person is, their intentions,’ Piccarreta told jurors.

Shaver’s widow, Laney Sweet, cried as the video was shown, and his parents left the courtroom shortly after it started playing. They later returned to their seats.

A previously released portion of the video showed officers taking cover in doorways and crouching down on their knees as they waited for Shaver to exit his room. But that edited version ended when someone walks out of the hotel room and didn’t show the moment of the shooting. 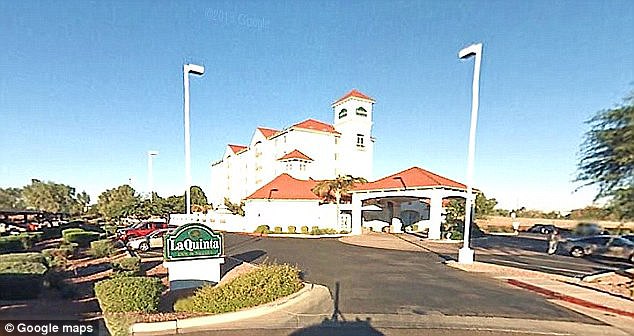 Shaver, who worked for a pest-control business, was staying at this La Quinta hotel in Mesa in January 2016 when he was killed by officers responding to a report of a person with a gun 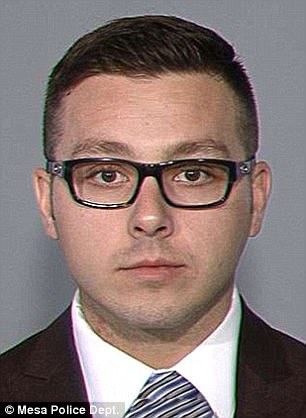 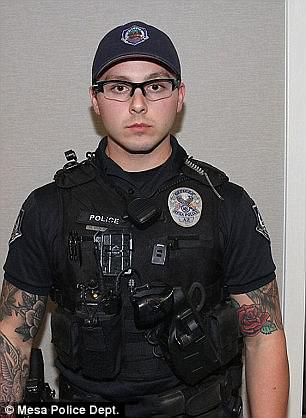 Ousted: Brailsford (left and right) served as a Mesa officer for about two years. He was fired after the shooting for unsatisfactory performance

The portion played for jurors shows Shaver being shot.

Judge George Foster barred news organizations from broadcasting the full shooting video, agreeing with Brailsford’s argument that it could hurt his fair-trial rights.

The Associated Press and other news organizations objected to the request, arguing the public has a First Amendment right to see the video.

No weapons were found on Shaver’s body, but two pellet rifles related to his pest-control job were later found in the room.

The prosecutor said a pellet rifle was pointed out the window for 30 to 45 seconds because Shaver wanted to show another man in his hotel room how far the rifle’s scope allowed him to see.

‘No shots had been fired. No one had been threatened,’ Charbel said.

According to Shaver’s family, the businessman from Granbury had traveled to Mesa for business and was staying at La Quinta on January 18 when six officers arrived at the scene around 9.20pm.

Police said Shaver was found in his room with a woman, whom he had met earlier that evening along with a man and invited both to come up for a drink.

The woman complied with police and got onto her hands and knees and crawled out the room, however officials said Shaver, who was also on his knees in the hallway, was difficult. 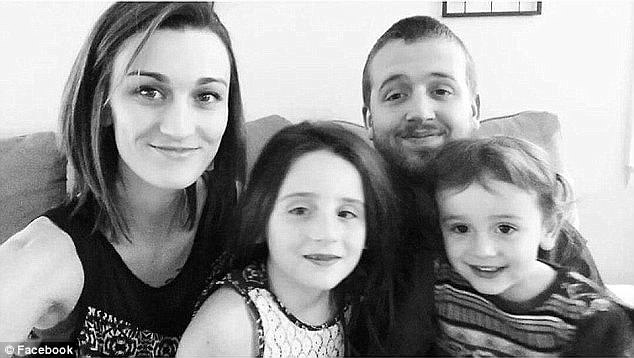 Shaver, pictured with wife Laney Sweet and their daughters, was unarmed at the time of his death

At one point, Shaver raised his hands in the air, but lowered them back down when an officer told him to crawl toward them, the video shows. When he made a rapid motion with his right hand, Brailsford opened fire, reported AZCentral.com

Brailsford served as a Mesa officer for about two years before he was fired for violations of departmental policy, including unsatisfactory performance.

If convicted of second-degree murder, Brailsford could face 10 to 25 years in prison. The trial will resume on Monday.