Jussie Smollett raised a fist in solidarity with the Black Lives Matter movement at a protest outside of the Trump Tower in New York.

The 38-year-old actor, who was accused of staging a fake attack on himself and claimed his assailants called him racial and homophobic slurs in Chicago in January 2019, participated in a large protest in Manhattan on Saturday.

Wearing a baseball cap and an orange face mask, the star who appeared in the series Empire gathered with other demonstrators outside Trump Tower to fight against systemic racism and police brutality.

The tower has been an epicenter for protests in the city where Mayor Bill de Blasio helped paint a Black Lives Matter mural on Fifth Avenue facing Trump’s building.

Jussie Smollett, 38, raised a fist in solidarity with the Black Lives Matter movement at a protest outside of the Trump Tower in New York City on Saturday 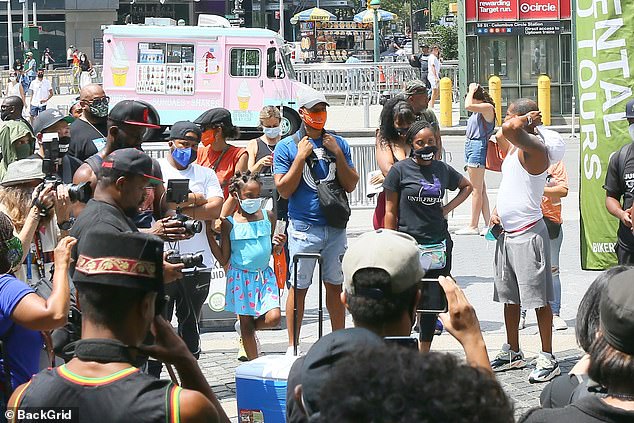 He wore a blue T-shirt, jean shorts, a baseball cap and an orange face mask during the protest 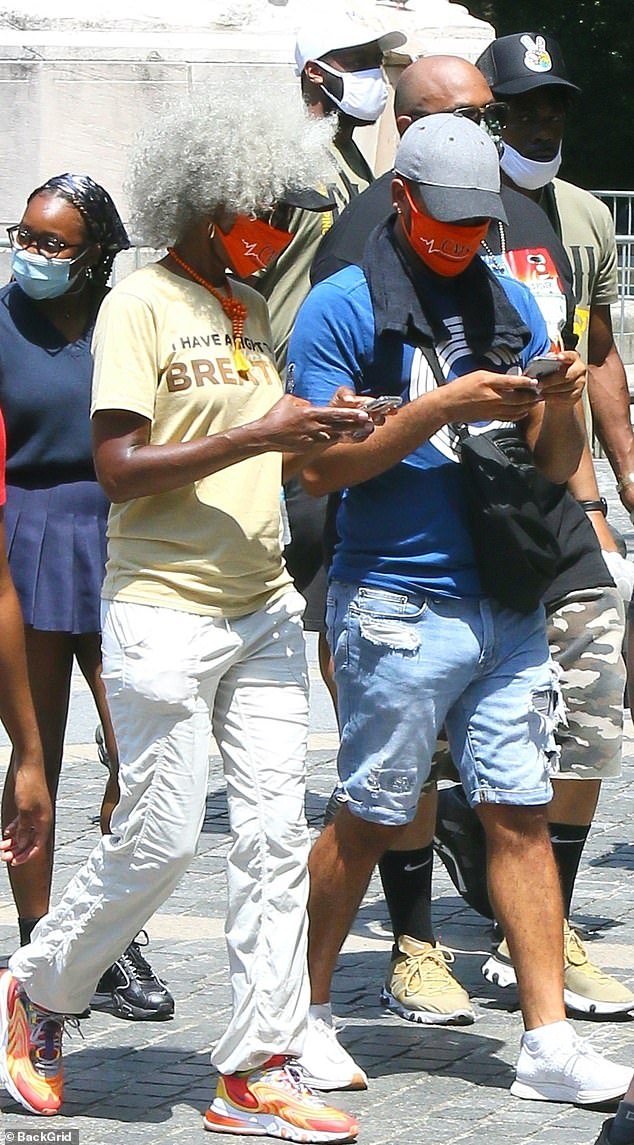 He was pictured walking closely with a friend during the protest. It’s not clear what organization planned the demonstration 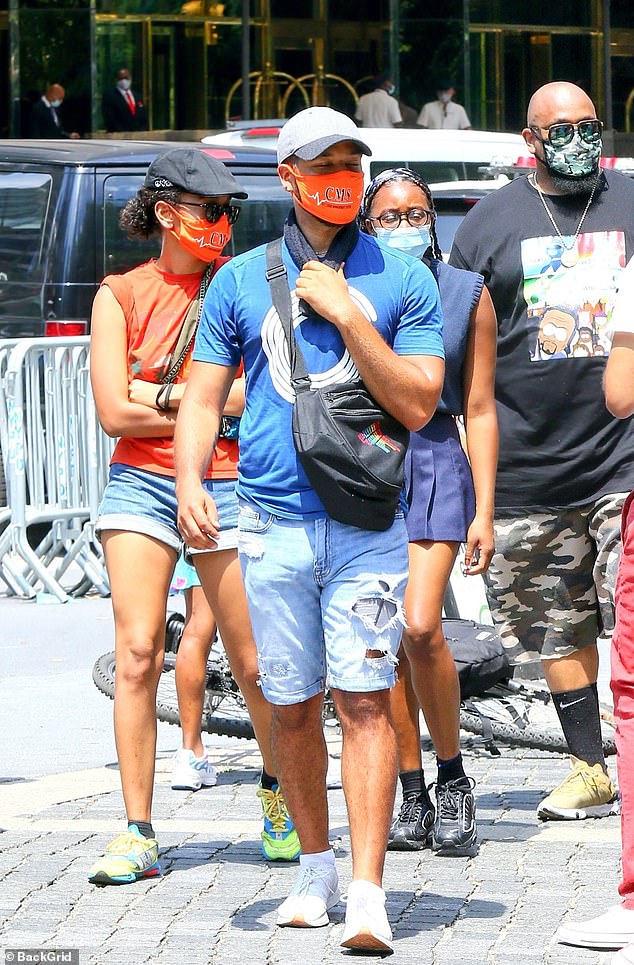 Smollett is fighting a $130,000 lawsuit with the city of Chicago after he was accused of staging a fake attack on himself in January 2019. He previously invoked Black Lives Matter protests and demonstrations in the name of George Floyd in demanding Chicago officials release information on former Police Chief Eddie Johnson

Smollett wore a blue T-shirt and jean shorts for the protest and was recognized by his distinctive equal sign tattoo on his right arm. It’s not clear what group he was protesting with.

On Saturday from day to night protests unfolded outside Trump Tower demanding Donald Trump be removed from office.

By nightfall a large group held a banner outside the Fifth Avenue tower saying ‘Trump/Pence #OutNow’, demanding that they resign, while a flag was raised that stated ‘Revolution Now!’

The president has come under heat for his handling of the coronavirus crisis and the Black Lives Matter movement.

Smollett invoked national protests for Black Lives Matter and demonstrations denouncing George Floyd’s death at the hands of Minneapolis police officers in his ongoing legal battle with the city of Chicago. 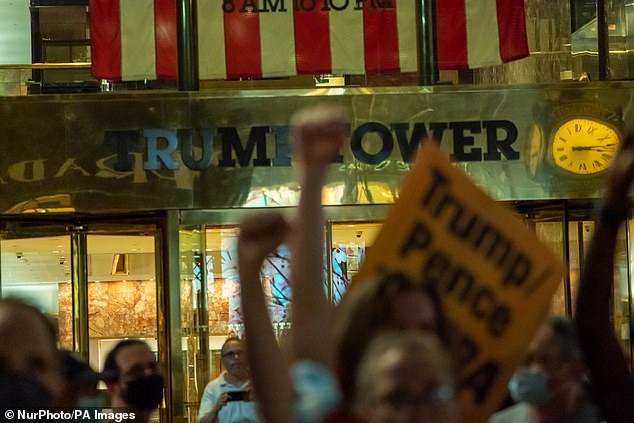 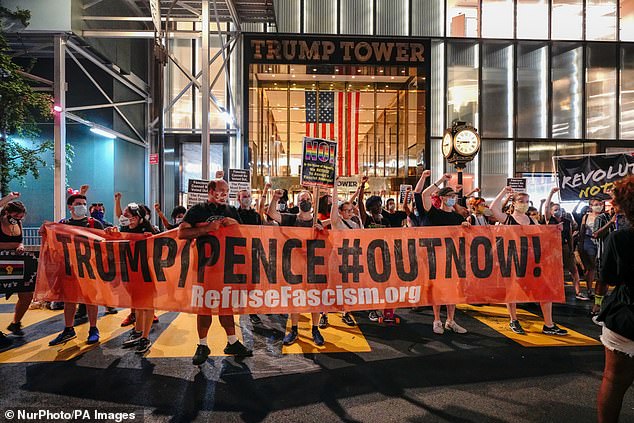 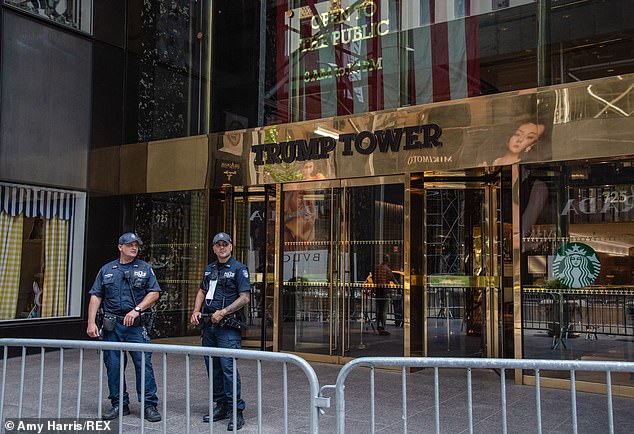 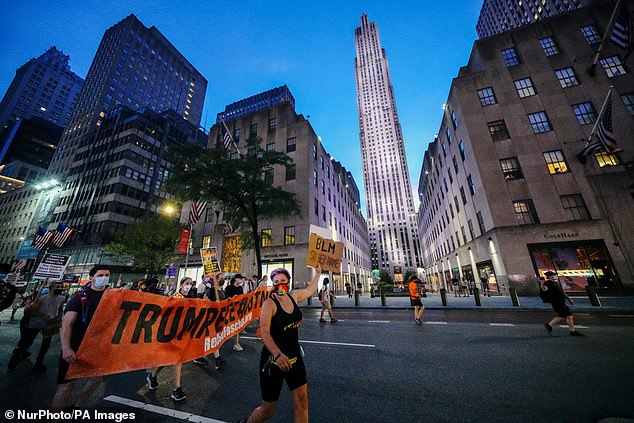 The actor’s fighting a $130,000 lawsuit from the city, where authorities accuse of him of lying and setting up the hoax attack.

The city of Chicago is trying to recoup the cost of the investigation into the Smollett ‘hoax’ totaling $130,105.15, and he’s fighting back demanding to see files related to the firing of former Police Chief Eddie Johnson.

Johnson was fired after he was caught drinking and kissing his female security guard during a night out in December 2019. 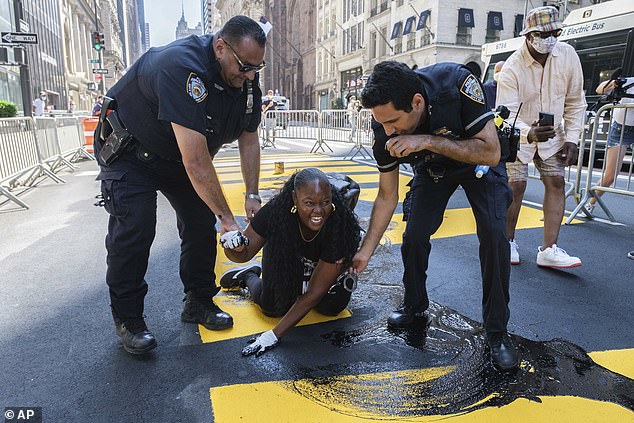 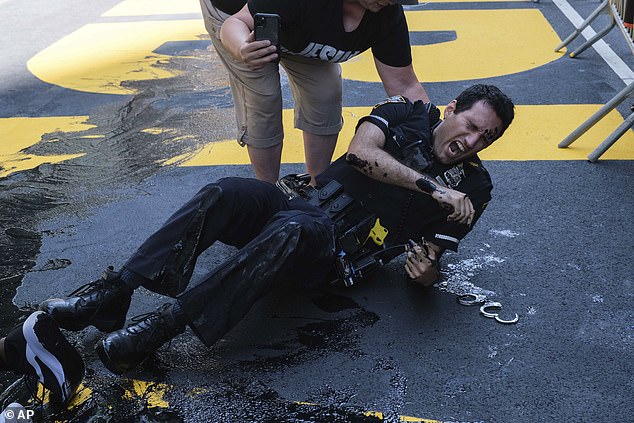 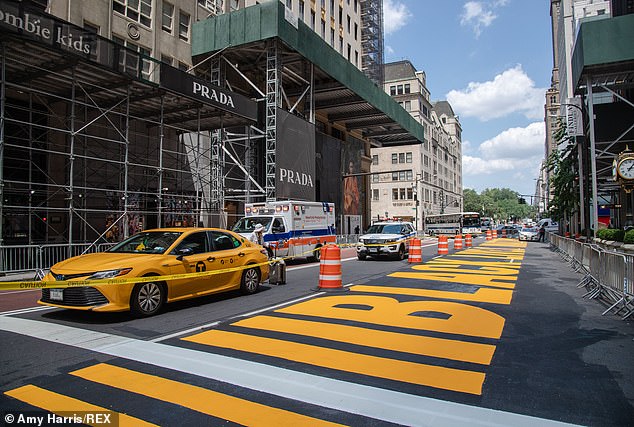 ‘As we see millions across the country rise up to protest and expose police misconduct, the City, by its refusal to produce the requested documents, is choosing to actively resist a citizen’s lawful efforts to reveal dishonesty, directly relating to the charges against him, throughout the department, including the police superintendent who oversaw and publicly commented on the investigation of Mr. Smollett’s report of a vicious hate crime and assault,’ Smollett’s attorneys wrote in a filing on June 6th. 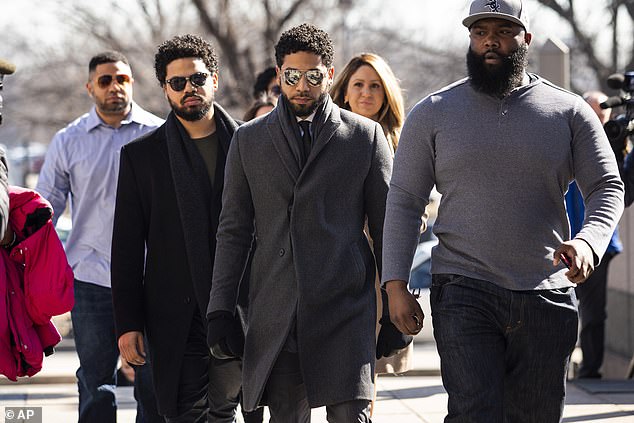 The 38-year-old actor, who is black and gay, was accused of staging a fake attack on himself and claimed his assailants called him racial and homophobic slurs in Chicago in January 2019. Smollett pictured arriving to court in March 2019 in Chicago 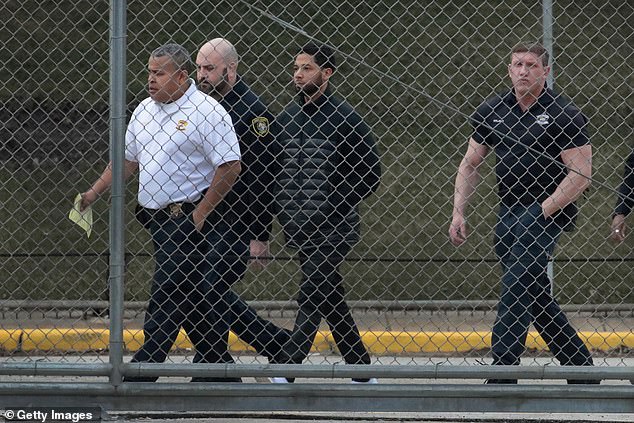 Guards pictured walking with Smollett before he was released on bond from Cook County jail on February 21, 2019

Earlier this month a federal magistrate judge said he would not order the city to share records related to Johnson’s firing with Smollett’s lawyers.

‘This case is only about whether Smollett faked a hate crime against himself and wrongly induced the CPD to expend time, money and resources to investigate that allegedly false claim,’ Harjani wrote.

Jussie Smollett returned to Los Angeles in April, after his lawsuit against the City of Chicago was tossed by a judge.

Since his return to L.A., Smollett has been seen catching up with his Empire co-star Taraji P. Henson and attending a Black Lives Matter protest.

His show Empire wrapped up its six-season run in April, though he was not a part of the final season, after being removed from the show due to the controversy surrounding his purported attack in Chicago.

He was last publicly seen in Los Angeles with his family in early July.