Jussie Smollett could have gotten the idea to stage his alleged hate-crime attack after Empire creator Lee Daniels revealed his cousin had been assaulted because he is gay.

Daniels posted a video on Instagram on January 10 condemning homophobia after his cousin was targeted and beaten because of his sexuality.

‘This past week my cousin was beat up for being gay and I am sick of hearing these stories,’ the Empire creator wrote alongside the video.

‘It’s the beginning of a new year and we need to do better. We need to continue to remember to love and to turn against the hate that we’re seeing out there. But we all need to fight that fight together. 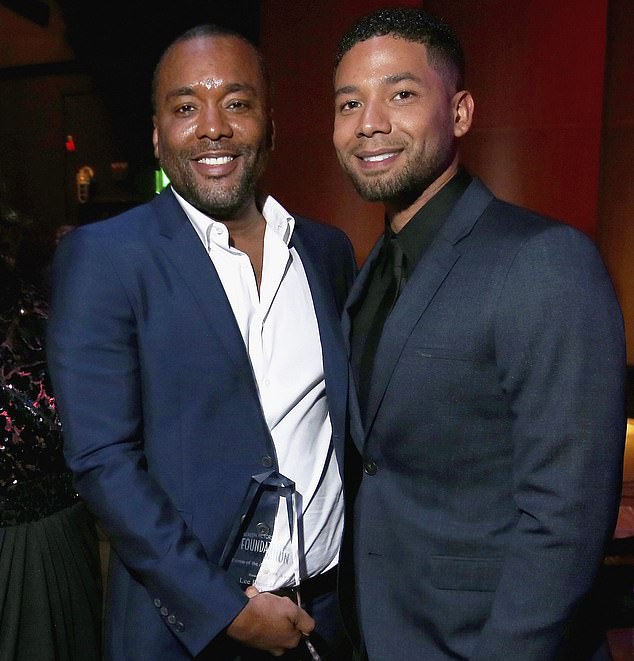 ‘For all the people who are hurting, who are struggling, and who are trying to find some meaning in this life, I am here to say if you need a safe place or a ear to listen, then I’m here.’

In addition to posting about the incident on social media, Daniels also spoke about it on the Empire set, sources told TMZ.

The sources, who are reportedly close to the show’s production staff, believe Smollett may have gotten the idea to allegedly stage his own attack after hearing Daniels’ story.

Smollett was charged on Thursday for allegedly faking the January 29 incident in which he claims he was beaten by two strangers in a racist and homophobic attack.

He told police the men called him a ‘fa***t’ and the N-word before shouting ‘This is MAGA country’, dousing him in bleach and throwing a rope around his neck. 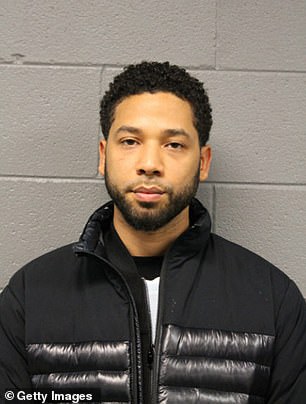 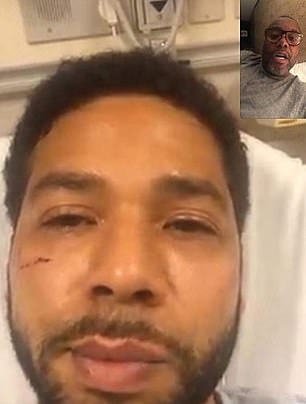 Smollett was charged on Thursday for allegedly faking the January 29 incident in which he claims he was beaten by two strangers in a racist and homophobic attack (left in his mugshot, right in hospital after the alleged attack) 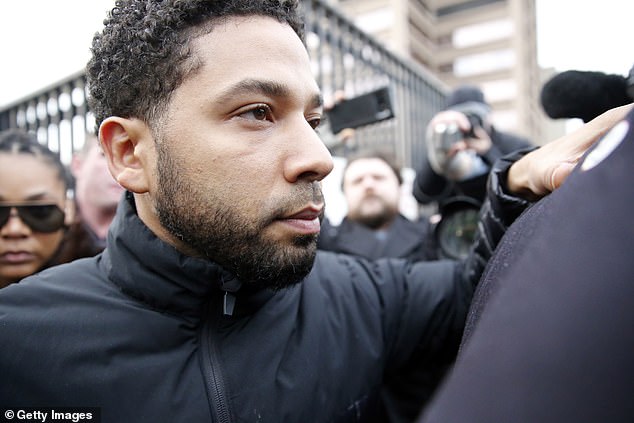 Smollett insists he is telling the truth about his attack.

Daniels issued a statement with Empire executive producers on Friday saying that Smollett’s character would be cut from the final two episodes of it fifth season after he was charged.

They said the case had taken a toll on the entire cast and crew.

The statement did not reveal whether or not they believe Smollett’s innocence, but said the allegations against him are ‘disturbing’.

‘The events of the past few weeks have been incredibly emotional for all of us.

‘Jussie has been an important member of our EMPIRE family for the past five years and we care about him deeply. While these allegations are very disturbing, we are placing our trust in the legal system as the process plays out.

‘We are also aware of the effects of this process on the cast and crew members who work on our show and to avoid further disruption on set, we have decided to remove the role of ‘Jamal’ from the final two episodes of the season.’

Daniels was among those to speak out after the incident was first reported to condemn it and offer his unreserved support to the actor.

‘It’s taken me a minute to come to social media about this because, Jussie, you are my son,’ he said in an Instagram video.