Car sales in the UK have fallen off a cliff with only 4,000 new registrations in April – the lowest level since 1946, just one year after the end of the Second World War.

The collapse, described by industry experts as ‘disatrous but not unexpected’ during lockdown compares with 161,000 sold for the same period in 2019.

Demand for new cars fell by around 97% last month amid the coronavirus lockdown, according to preliminary figures released by the Society of Motor Manufacturers and Traders (SMMT).

Many car showrooms across the country have been closed, but some deliveries of new vehicles are still taking place.

The SMMT is forecasting that around 1.68 million new cars will be registered during the whole of 2020, which would represent a 27% decline on last year.

Demand for new cars fell by around 97% last month amid the coronavirus lockdown, according to preliminary figures released by the Society of Motor Manufacturers and Traders (SMMT)

Hundreds of small businesses applied for government-covered bounce-back loans yesterday to help them recover in the wake of the coronavirus, it has been revealed.

Banking giant Barclays says it received 200 applications within the first minute of the launch of the scheme yesterday morning.

It comes a week after Chancellor Rishi Sunak announced the bounce back loan scheme, which allows small businesses to lend up to 25 per cent of their turnover, up to a maximum of £50,000.

He promised a Government guarantee for 100 per cent of the risk the banks are taking in lending the money.

The Treasury has also promised to cover the interest on the loans for the first 12 months.

Barclays chiefs say alongside the 200 applications it received within the first minute, it has also received around 35 applications every minute since.

Matt Hammerstein, the chief executive of Barclays UK, told the Treasury Select Committee that all 200 applications received in the first minute of the launch of the scheme were approved just minutes later.

He said: ‘The process to be able to get access to the money is super simple.

‘We’d expect the cash to be with those clients over the course of the next 24 hours.’

Lloyds also revealed that its customers had sent around 2,000 requests for bounce-back loans in the first two hours after it opened its doors Monday morning.

David Oldfield, the chief executive of commercial banking at Lloyds, said: ‘We do expect a really quite significant volume flowing through to the bounce back loans.’

Mr Sunak announced the bounce-back loan scheme last Monday after complaints from business owners of delays and problems in getting cash from banks.

Jim Holder, editorial director of What Car? magazine, said the figures for April were ‘disastrous but not unexpected’, as buying a new car was ‘as far from people’s minds as you can possibly get’.

‘It’s consistent with the figures coming through from the rest of Europe,’ he said. ‘Everything was frozen for a month.’

Mr Holder said that in the short term, there is a ‘substantial amount of pent-up demand’ for new cars.

He said retailers need to introduce social distancing standards which mean customers have confidence they can ‘buy a car without risking their lives’.

He acknowledged that any spike in sales is ‘not going to fill the gap’ in terms of revenue lost in recent weeks, but urged the automotive industry to ‘make the most of every opportunity’.

‘As far as I can see, the vast majority of car-makers have the cash reserves to ride this out, at least for the short term.

‘You have to worry about the ones you were worried about before, like Fiat, like Jaguar Land Rover to a degree, like Tesla to a degree – for all their brilliance they don’t have huge cash reserves.

‘But I think they can all pretty much handle – with some careful measures – one bump. I would think if it becomes more sustained or returns, then you’re going to have to look at it again.’

Final figures for the number of new cars registered in April will be published by the SMMT at 9am on Tuesday.

Mike Hawes, chief executive of the society of motor manufacturers and traders, told BBC Radio 4 the reduction in figures was ‘absolutely’ a natural result of the lockdown, adding: ‘If you’re told to close all your showrooms for the entirety of April it’s no surprise there are almost non-existent sales just a handful mainly to fleets.’

He said the 4,000 that were sold were primarily sold to fleets who will have had long-term orders.

From this week, manufacturing has been closed for four to five weeks, he said, adding that ‘gradually manufacturers are trying to work out how to get back to manufacturing’.

Speaking of new reports of a document outlining return to work measures, he said it was ‘reassuring’ that its contents were not at odds with what manufacturers were already doing or seeking to implement. 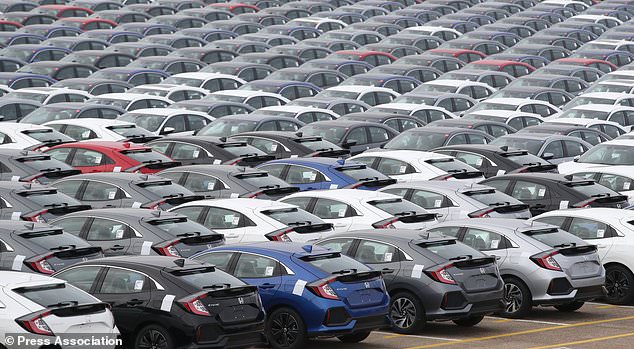 As the car industry scrambles to adapt to the new ‘normal’, Jaguar Land Rover upgrades its ‘virtual showroom’ to boost sales

A year-long digital car-buying trial which began with just five per cent of customers is now being made available to all prospective buyers – evidence has shown that a higher proportion of digital buyers are female, compared with traditional showroom sales.

With showrooms now closed during the lockdown and car sales plummeting, it is the latest way major car makers are having to adapt their businesses due to coronavirus and could accelerate a revolution in the way all cars are bought and sold in future. 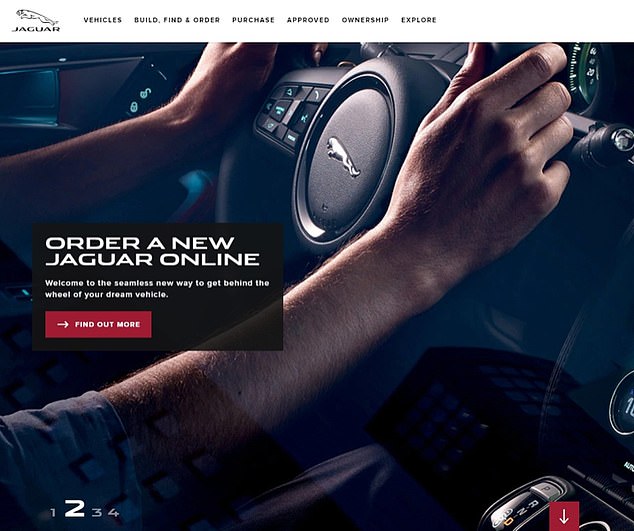 Hands on: Customers can create the car they want online and purchase it ‘at the click of a button’

Customers can create the car they want online and purchase it ‘at the click of a button’ with delivery to their home made in a manner which complies with strict lockdown safe-distancing rules.

The Government announced last month that motor traders will be allowed to sell and deliver vehicles remotely during the lockdown, providing they stick to social distancing guidelines, meaning online-sales only as showrooms remain closed.

It also comes as manufacturers, including JLR, are preparing to re-start partial, or in some cases, full factory production of cars.

JLR said: ‘Following a trial period and a staged roll out, Jaguar Land Rover UK has expanded its online sales offering in light of coronavirus restrictions so that customers can browse, build and order online from the safety of their own home.’

The firm, with plants in Castle Bromwich and Solihull in Birmingham, Halewood on Merseyside and also in Slovakia, has been running online sales trials since May last year using ‘virtual’ showrooms, so that customers can configure the car they want, according to trim level, engine size and added ‘extras’.

More than 3.3 million shoppers have taken part so far, it said, noting: ‘Virtual showrooms and remote concierge services ensure the protection of customers and staff whilst maintaining the highest levels of care and personal attention.’

JLR said its remote retailing will offer customers more flexibility during the Coronavirus outbreak: ‘A range of digital sales services have been gradually rolled out over the past year, offering buyers part exchange valuations, finance quotes, finance applications and online reservations.

‘People using the online configurator can purchase the vehicle they’ve built at the click of a button.

‘The trial began with just 5 per cent of users and has gradually been made available to 100 per cent of users on the Jaguar and Land Rover UK websites. Now, with UK retailers closed to prevent the spread of Coronavirus, Jaguar Land Rover UK’s online services are being expanded and honed to offer buyers ultimate flexibility and convenience.’

It said the first vehicle ordered through the service was a £119,000 Range Rover.

JLR said: ‘Online customers configuring their new vehicle go through the usual process of picking their engine, trim level and options – across any Jaguar or Land Rover model – before being invited to purchase the vehicle.’

They are offered the option of cash payment, a Personal Contract Purchase (PCP) or Hire Purchase.

Buyers are also offered a valuation of their current vehicle for part exchange. They can make a finance application and put down a deposit. 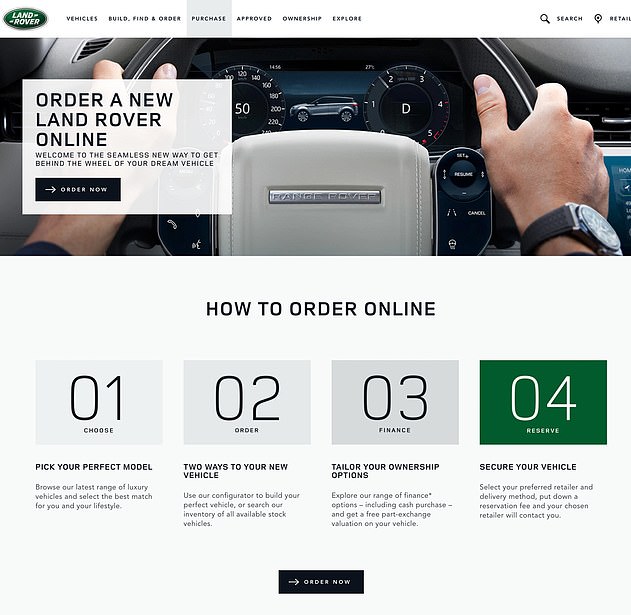 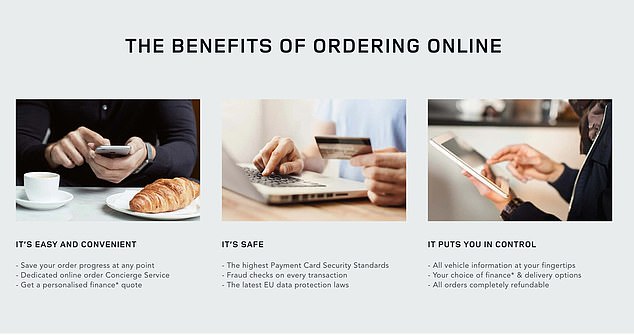 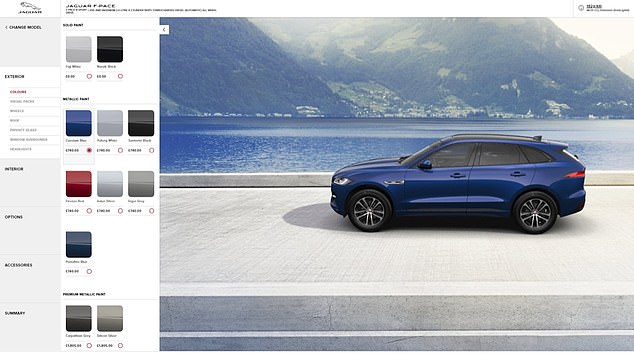 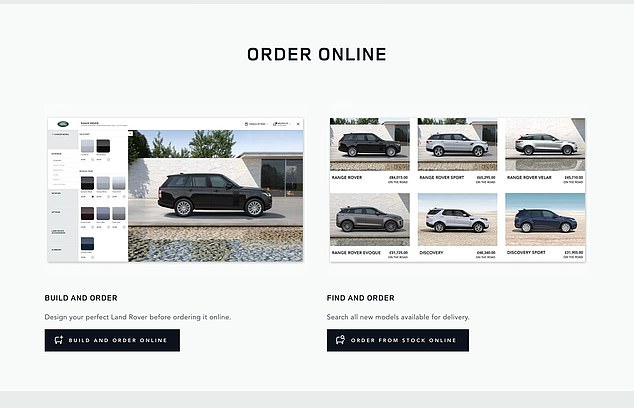 Step-by-step guide: Potential customers on the www.jaguar.co.uk and www.landrover.co.uk sites can either configure a new vehicle or browse stock available throughout the UK

The firm noted: ‘Customers opting for finance plans can see how much extra per month will be added or removed to their plan if they choose to add or remove options, Jaguar Land Rover being the first manufacturer to provide this feature. ‘

Potential customers on its www.jaguar.co.uk and www.landrover.co.uk sites can either configure a brand-new vehicle or browse stock available throughout the UK retailer network.

JLR said: ‘To help inform customers, new virtual showrooms have been created with video presentations to showcase all Jaguar and Land Rover models. Phone and video sales appointments are available so that customers can talk directly to specialist consultants to answer questions and discuss specific needs, removing the need to visit a showroom.’

Retailers are also offering tailored services for vehicle deliveries in line with the latest government guidance: Many sites have individual handover bays which have been prepared in line with social distancing and hygiene guidelines and parts of the network are offering delivery options.

Rawdon Glover, managing director of JLR UK said: ‘We have been refining our online customer journey for a while and, thanks to the support of our retail partners, we can now provide a comprehensive, convenient and flexible service that is safe for our customers and our staff.’

Customers can order a new car at www.volvocars.co.uk/order-online which now has a new ‘live chat’ function linking people to advisers.

Special ‘social distancing’ measures have also been rolled out across service and repair outlets ‘to help keep customers and retailer staff as safe as possible’.

Volvo said: ‘Customers can now opt for contactless home delivery of their new car, in line with government guidelines.’

Scotland were ‘digital window shopping’ online the most (55 per cent), followed by Londoners (52 per cent), and those in the South East and Yorkshire (both 50 per cent).

Robert Forrester, chief executive of Vertu Motors, with 133 UK dealership outlets, said since adapting to the lockdown they had 2,825 phone calls of which 1,816 were to book a car service, 380 were sales enquiries and 66 actual retail orders.

The company has brought back 1,000 of its 6,000 furloughed employees and switched calls via its Gateshead call centre to workers’ homes.

But he stressed: ‘I don’t think our business will ever be the same again. It will never be like it was.’

Rolls-Royce is to become the first UK car firm to re-start full production after the corona virus lockdown.

Bosses said that 1,000 employees – half the total workforce – will be back on the production line resuming production of its exclusive Phantom, Wraith, Dawn and Cullinan models.

The firm’s factory at Goodwood, near Chichester, will operate one shift daily, rather than the usual two.

Staff will be wearing protective clothing and masks, and observing social distancing rules in line with Health and Safety advice.