Boxing Day rail shutdown: Just FIVE of 28 rail firms are running services today as the network grinds to a halt

Train firms are facing a backlash after it was revealed just five out of 28 operators will run services today.

Even those networks in operation will have a vastly reduced service – and not a single train will run in England outside the south-east.

Despite a full programme of football fixtures and the start of the sales, several operators are using the festive period to carry out engineering work.

Despite a full programme of football fixtures and the start of the sales, several train operators are using the festive period to carry out engineering work (file photo)

Only Chiltern, ScotRail, Southeastern, Southern and the Stansted Express are running, according to National Rail.

It is nearly 40 years since the last full rail schedule on Boxing Day in 1979. The Government has promised to increase Boxing Day trains as a way to cut road congestion.

But last night, Labour accused ministers of allowing a ‘rail standstill’ and forcing Britons to make slower journeys by car instead.

A requirement had been written into Northern Rail’s franchise agreement to introduce at least 60 Boxing Day trains this year.

But rail minister Andrew Jones said it would no longer do so due to engineering work.

TransPennine Express also decided against introducing Boxing Day trains despite being required to consult passengers about them.

There will also be no services on Merseyrail despite running a limited operation last year. Gatwick and Heathrow express services are also out because of major engineering work. 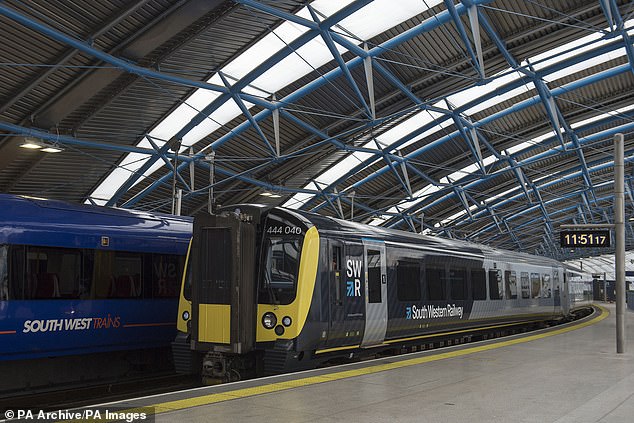 Only Chiltern, ScotRail, Southeastern, Southern and the Stansted Express are running on Boxing Day, according to National Rail (file photo)

There will be no services between London Victoria – the UK’s second-busiest railway station – and Clapham Junction until 2 January due to track renewal.

Labour’s transport spokesman Andy McDonald said travellers had been ‘tricked’. ‘Tory ministers’ handling of the Boxing Day rail standstill is making it much harder for families and friends to visit one another this Christmas break,’ he said.

‘In opposition the Tories attacked the Boxing Day rail shutdown, but they’ve now had more than eight years to do something about it and haven’t lifted a finger.

‘The Tory hypocrisy on this issue is astounding.’

Gary Cooper, of the Rail Delivery Group – which represents operators – said: ‘Fewer people travel by rail over Christmas and the New Year, which is why rail companies use this time to carry out important engineering work.

‘Train operators work with Network Rail to run services, where possible, on routes where many customers want to travel by rail.’

A Department for Transport spokesman said: ‘While most of the network is open for business, some routes will be heavily affected and we expect the industry to deliver the highest standards of customer service, including giving passengers the information they need to plan their journeys accordingly.’