Just one flu jab could cut the risk of Alzheimer’s by 17 per cent, research suggests

Just one flu jab could cut the risk of Alzheimer’s by 17 per cent, research suggests

A study of 9,000 people found those who had just a single flu vaccine were 17 per cent less likely to have Alzheimer’s than those who had never been vaccinated.

And those who had their flu jab every year saw their risk reduce by a further 13 per cent.

A study of 9,000 people, conducted by McGovern Medical School at the University of Texas, has found that flu vaccines could reduce the chance of developing Alzheimer’s disease (file photo)

Experts last night described the finding as ‘intriguing’ – but were left puzzled as to exactly how vaccination against influenza reduces the risk of dementia.

Some believe the jab may help boost the general immune system – offering the brain some protection when it is vulnerable to decline.

There is also a possibility that a major infection such as a bad bout of the flu may hasten the onset of dementia among those already at risk.

Doctors stress that anyone at risk of dementia – especially the elderly – should get vaccinated against flu regardless of this study.

The Government has lowered the age threshold for free flu jabs from 65 to 50 to reduce the impact of a possible second wave of coronavirus this winter. 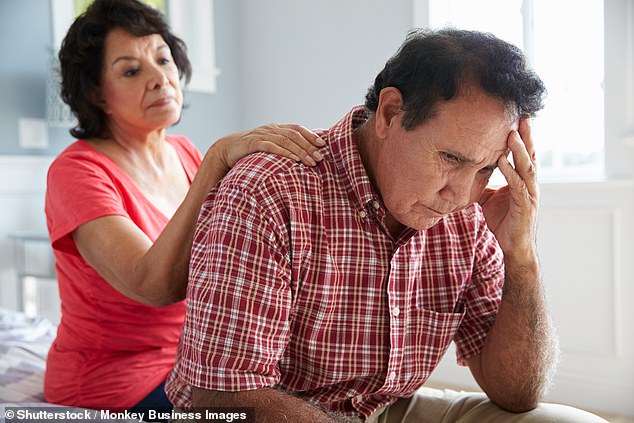 People who had just a single flu vaccine were 17 per cent less likely to have dementia than those who had never been vaccinated, the research showed (file photo)

Albert Amran, of McGovern Medical School at the University of Texas, who led the US study, said the younger someone is when they first receive a flu vaccination, the greater the protection against dementia.

The scientist, presenting his research via videolink to the Alzheimer’s Association International Conference, said: ‘More research is needed to explore the biological mechanism for this effect – why and how it works in the body.’

‘This research does not mean that Alzheimer’s disease is caused by the common flu and there are potential non-biological explanations for this association, such as people who get the flu vaccine being more likely to take other steps to protect their health.’