Just weeks after quitting, Sir Martin Sorrell is back with a new media company

Just six weeks after he stepped down as head of the world’s largest advertising agency following a misconduct investigation, Sir Martin Sorrell appears to be making a dramatic comeback.

The 73-year-old former boss of WPP – which he founded 33 years ago and turned into a £15billion global empire – is understood to be ploughing £40million into a new venture called S4 Capital to create a marketing services firm.

He is expected to be announced today as the executive chairman of the listed firm Derriston Capital, as part of a plan under which Derriston will buy S4 Capital – allowing him to return to the London Stock Exchange.

Just six weeks after he stepped down as head of the world’s largest advertising agency, Sir Martin Sorrell (pictured with his wife Christiana Falcone) appears to be making a dramatic comeback

In mid-April, Mr Sorrell resigned suddenly from WPP in one of the biggest corporate downfalls in decades. The firm was investigating a whistleblower’s allegation that he misused company funds.

The inquiry has finished but the details will not be made public. WPP said: ‘The allegation did not involve amounts that are material.’

Sir Martin denies any wrongdoing, and remains eligible for share-based bonuses worth £19million.

The tycoon has come under fire for his pay at WPP, which was about ten times as much as the average FTSE 100 boss earns.

He received £274,000 to pay for his wife, Cristiana Falcone – a World Economic Forum advisor almost 30 years his junior – to accompany him on business trips.

He is ranked number at 285 in this year’s Sunday Times Rich List, with his net worth estimated at £456million. 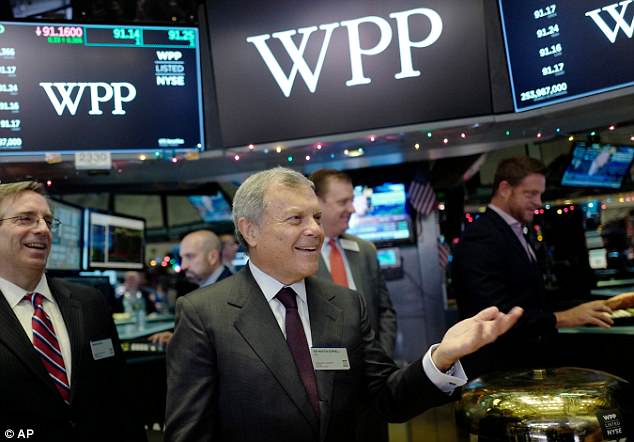 The tycoon has come under fire for his pay at WPP, which was about ten times as much as the average FTSE 100 boss earns

The Cambridge and Harvard-educated father-of-four has regularly dropped hints about getting back into business. At a conference in New York, he insisted he had no intention of retiring, and said agencies needed to be ‘more agile’ amid major changes in the advertising industry brought about by Facebook and other social media.

The return of one of the world’s most successful ad tycoons will be watched closely in the industry.

His comeback vehicle, Derriston Capital, is a so-called cash-shell company, whose purpose is to buy other firms rather than trade in its own right. The London-listed firm was set up to look at opportunities in the medical technology industry, but has since shifted its focus.

It will change its name to S4 Capital following the deal. Being taken over by a cash-shell is often an easier way for a private company to join the Stock Exchange.

Derriston said a statement would be released to the Stock Market this morning. Sir Martin declined to comment on ‘market speculation’.