Justice League is a poor start to DC Comic’s franchise

Remember how The Avengers assembled back in 2012? How Iron Man, Captain America, Hulk and Thor came together for the very first time?

Thanks to a genuinely clever and witty script, director Joss Whedon’s confident grasp of comic-book fun, and some top-quality acting from its A-list cast, there was a proper sense of occasion. The so-called MCU – Marvel Cinematic Universe – had definitely arrived.

Now it’s the turn of Marvel’s historic rival, DC Comics, to do something similar with its own extended cast of characters. 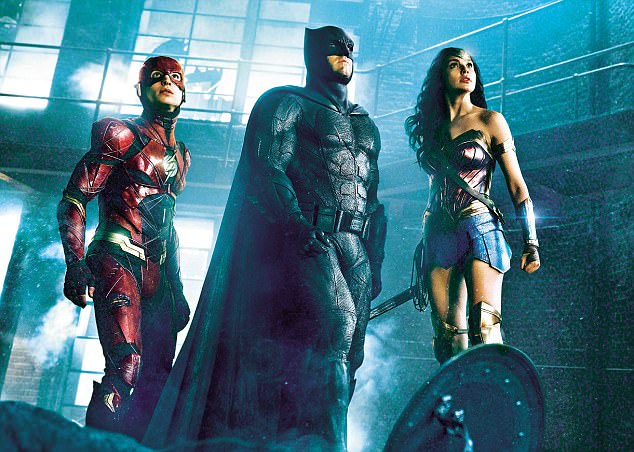 The Avengers assembled in 2012; now it’s the turn of Marvel’s rival, DC Comics, to do something similar with its own cast of characters (Flash, Batman and Wonder Woman, above)

They’ve already dipped a tentative toe into the mash-up world with Batman V Superman and tried something almost too different for its own good with Suicide Squad, but for Justice League they are rolling out the big guns.

It’s let down by almost everything – a poorly constructed script that rarely raises a smile, direction that slows the pace to a crawl at all the wrong moments, and the worst superhero villain since the Avengers’ awful Ultron. 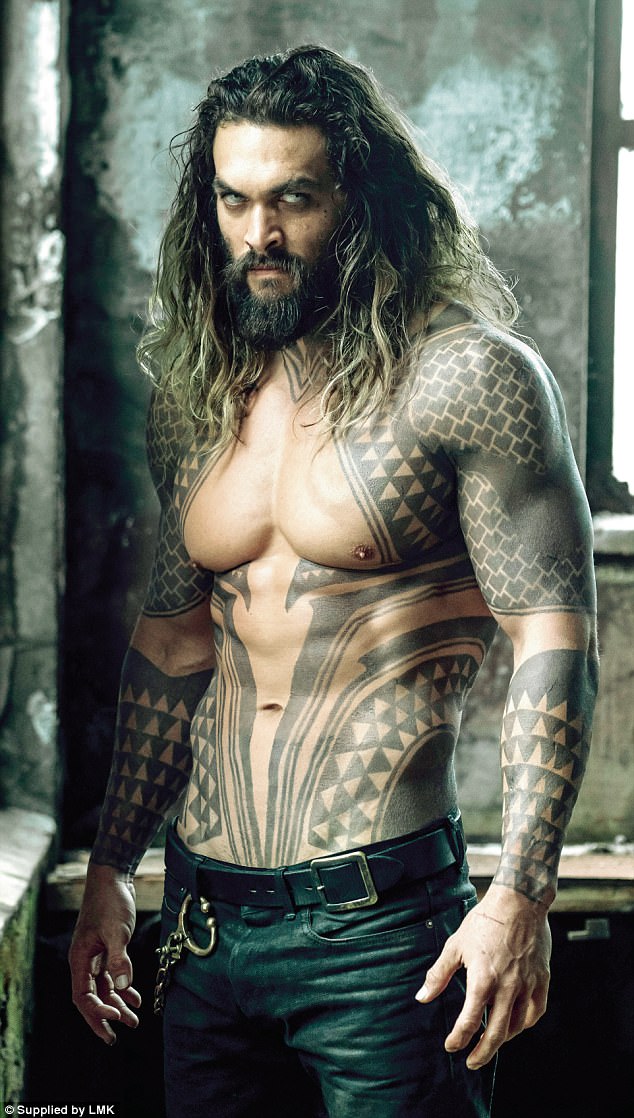 But I found myself wondering why they had bothered and there’s a distinct feeling of unpreparedness. Jason Momoa has the flowing locks but not the acting chops as Aquaman

Steppenwolf is an ancient alien demon made unconvincing flesh by blending visual effects with Ciaran Hinds’s voice. And no, a demonic army of red-eyed flying bugs doesn’t help.

But there are problems with the component parts of DC’s band of superhero goodies too.

For while the Avengers came together only after Robert Downey Jr had so brilliantly established the Iron Man franchise and the world had been promisingly introduced to both Captain America (Chris Evans) and Thor (Chris Hemsworth), there’s a distinct feeling of unpreparedness to their DC counterparts. 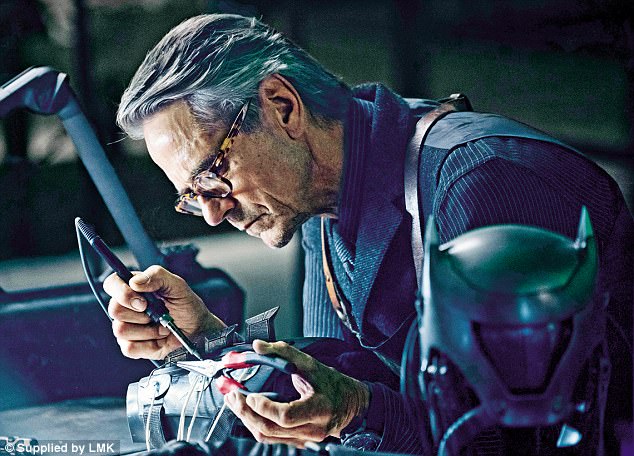 Too much time is spent introducing characters who aren’t yet interesting and Ben Affleck is still finding his way as an older, grumpier Batman (above, Jeremy Irons as Alfred)

Henry Cavill has done a decent job of rebooting the Superman franchise but has hardly set the world alight. And, besides, as the new film gets under way, Superman is dead.

Ben Affleck is still finding his way as an older, grumpier and obviously middle-aged Batman. Only Gal Gadot’s Wonder Woman could claim to be at the top of her game after the phenomenal success of her standalone film this year, but, sadly, she’s not quite on the same form here.

As for the secondary characters we meet for the first time here – Game Of Thrones star Jason Momoa has the flowing locks but not the acting chops as the Atlantis-dwelling Aquaman, and the little-known Ray Fisher struggles to convince as Cyborg (he was rebuilt after a laboratory accident).

As for Ezra Miller as the fast-moving Flash, not only has his character been thoroughly pre-empted by the X-Men’s Quicksilver, his clunky performance fails to deliver the laughs that it’s clearly intended to, and which the film so badly needs. 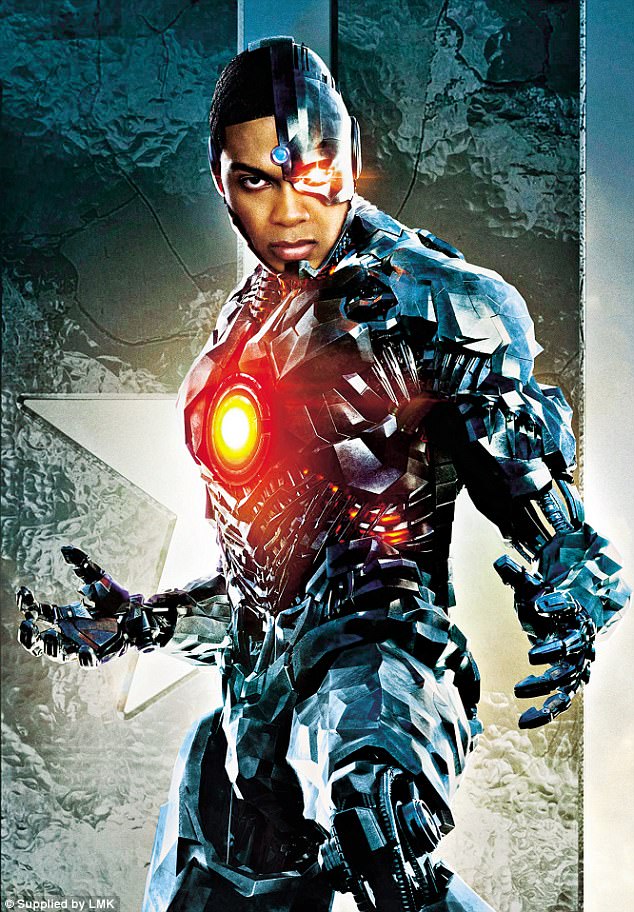 The little-known Ray Fisher (above) struggles to convince as Cyborg and Ezra Miller as Flash fails to deliver the laughs that he’s clearly intended to, and which the film so badly needs

The highly rated genre director Zach Snyder may have 300, Watchmen and Man Of Steel to his name, but from the moment a pre-opening credit video sequence about Superman falls flat, he seems to lose his way here.

Too much time is spent introducing characters who aren’t yet interesting, and Batman’s move from the relatively real criminal world of Gotham City to the out-and-out fantasy of the superhero universe is a stretch both for us in the audience and the character himself.

‘What are your superpowers again?’ asks Barry, who hasn’t yet pulled on his Flash suit. 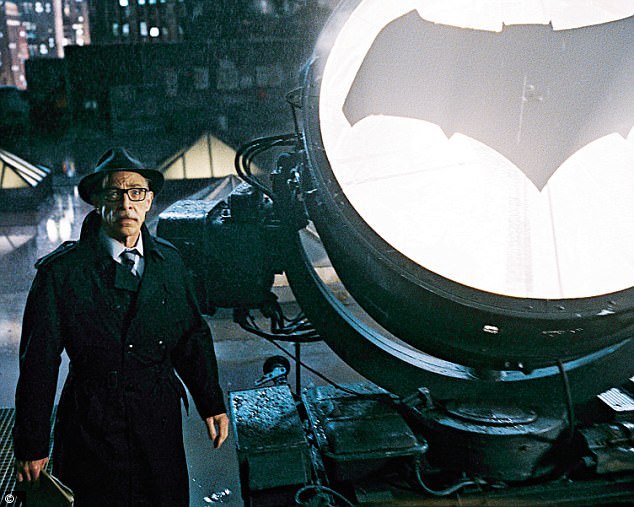 Batman’s move from the relatively real criminal world of Gotham City to the out-and-out fantasy of the superhero universe is a stretch (above, JK Simmons as Commissioner Gordon)

‘I’m rich,’ growls Batman, which I’m afraid is almost the funniest line in the film.

It’s too early to write off the entire franchise, particularly after the success of the standalone Wonder Woman film and after a barely worth-waiting-for post-credit sequence makes it clear that a sequel is already on its way regardless.

But this is definitely a poor start, thanks to a derivative-feeling story that combines the disappointing Steppenwolf, three ‘mother boxes’ and something all glowy and powerful called ‘the unity’, which sounds awfully like the Avengers’ ‘tesseract’ and even the Transformers’ ‘all-spark’.

You’d expect better from a screenplay co-written by the franchise-hopping Whedon.

In the 1960 comic, the first enemy the Justice League faced was a giant starfish called Starro who fired miniature versions of himself at people’s faces.

Even the visual effects underwhelm, with Wonder Woman particularly ill-served both by action sequences set on Amazon home territory Paradise Island and by another where she improbably saves the day in London.

As for the big climax, it not only takes too long coming but also feels like something we’ve seen done better elsewhere.

It’s a shame to see actresses as good as Amy Adams and Diane Lane reduced to minor parts – they play Lois Lane and Clark Kent’s mother respectively – when the film is crying out for a little talent and charisma.

The jumpy Jesse Eisenberg, who played the villainous Lex Luther in Batman V Superman, is missed for similar reasons.

I’m pretty sure we haven’t heard the last of him, or indeed of the DC superhero franchise. But, after this conspicuous misfire, someone is definitely going to have to summon up the cinematic superpowers to get the show back on track. Now there is a job for Superman.

Remember My Week With Marilyn, the 2011 drama about a young film student who befriended Marilyn Monroe when she was making The Prince And The Showgirl in London?

Well, Film Stars Don’t Die In Liverpool, also based on a real story, is quite a lot like that, except that this time the star is Gloria Grahame, who was three years older than Monroe and actually had an Oscar to her name.

By the time Grahame arrived in London in 1979 to work in the theatre, those Hollywood glory days were long past. 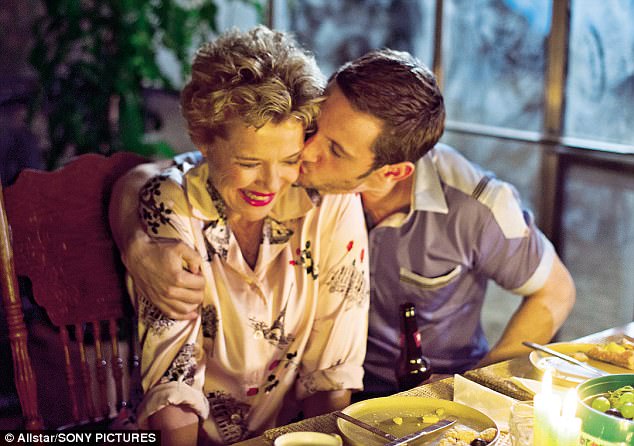 The acting in Film Stars Don’t Die In Liverpool is wonderful, with Annette Bening outstanding as the vain, deluded and not always likeable Gloria Grahame (above with Jamie Bell)

That said, she was only in her mid-50s and could flirt her way into just about any man’s affections. The young actor sharing her digs, Peter Turner (Jamie Bell), didn’t stand a chance, despite a near 30-year age gap.

Two years later, however, and with their romance apparently run, Grahame collapses in her dressing room.

She rings Peter’s home in Liverpool, desperate not just to be reunited with her former love but, somewhat bizarrely, to be cared for by his mother, Bella (Julie Walters).

The acting is wonderful, with Annette Bening outstanding as the vain, deluded and not always likeable actress, and Bell at last finding a period and part that really suit him as an adult actor.

It is a truth universally acknowledged that an Instagram star in need of followers is likely to attract nutcases.

Yes, if Jane Austen were alive today, she might well be writing screenplays such as Ingrid Goes West, a tale of the dangers of our social media era. A Single White Female for a new century, it’s as creepy as it is funny.

Former Twilight star Robert Pattinson gives his best performance for a while in Good Time. He plays a bungling bank robber who will do anything to rescue his mentally challenged brother from police custody. Getting the right man would be a start.

Mudbound is a well-intentioned but ponderous tale of Mississippi Delta misery and racism starring Jason Clarke and an impressive Carey Mulligan. It manages to be shocking and unsurprising at the same time.