Universities will be fined if they are unable to provide justification for paying their bosses more than the Prime Minister, Jo Johnson will say today.

The universities minister is due to announce the crackdown in response to a growing outcry over the lavish salaries enjoyed by many vice chancellors.

Last year, they earned on average £277,834 including benefits, although the highest paid, Dame Glynis Breakwell, made £450,000 in her role at Bath University.

Many also live in luxurious grace-and-favour homes, travel business class and some even have their household bills paid.

Critics have said it is inappropriate for vice chancellors to be paid so generously when student fees are rising again this month from £9,000 to £9,250.

Mr Johnson has previously repeatedly called for an end to the ‘upwards ratchet’ of senior pay, but many universities have taken no notice.

So today, he is expected to announce measures to stop remuneration boards awarding generous pay rises unless they are genuinely deserved.

He will tell the Universities UK annual conference: ‘The debate over student finance has, rightly, increased public scrutiny of how universities spend the money they receive from fees.

‘When students and taxpayers invest so heavily in our higher education system, excessive vice chancellor salaries send a powerful signal to the outside world.

He said a newly formed regulator, the Office for Students (OfS), will insist all universities justify any vice chancellor pay over £150,000 – the salary of Theresa May – as part of their condition of registration.

If an institution fails to do so, the OfS will take action – which may include imposing a fine.

The OfS will issue new guidance on senior staff pay, and will require universities to publish details of all senior staff earning over £100,000 per year.

Mr Johnson is also calling on universities to publish the pay ratio of top to median staff pay, and explanations for any top pay increases that are greater than increases in average pay across the institution. 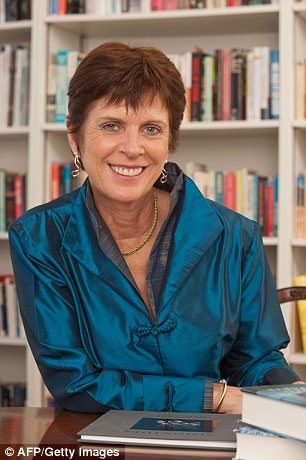 The announcement comes after Oxford’s vice chancellor Louise Richardson had to defend her £350,000 salary

The chief executive of the OfS, Nicola Dandridge, and the chairman, Sir Michael Barber, have announced they will voluntarily cut their own annual salaries to set an example to the sector.

Their pay packets have been reduced by 18 and 10 per cent, respectively, and equates to a combined reduction of more than £65,000.

Robert Halfon, Conservative chair of the education select committee, said of the crackdown on pay: ‘This is an important step forward.

‘Vice chancellors’ pay must be fair to students and fair to the taxpayer.

‘Rises should be based on the performance of universities.’

The announcement comes after Oxford’s vice chancellor Louise Richardson sought to fend off criticism of her £350,000 salary by claiming it is about maintaining gender equality.

When challenged over her pay live on BBC Radio 4’s Today Programme, she said: ‘The vice chancellor of Oxford’s salary has not changed in the past few years, and so I wouldn’t have thought the BBC would want to argue that I should be paid less than my male predecessor.’

Oxford’s previous vice chancellor, Andrew Hamilton, had a salary of £346,000.

‘The fact that her predecessor was wildly overpaid is no reason for her to be so too.

‘I think male vice chancellors are just as overpaid as the female ones.

‘They should both take a pay cut and return the money to students in the form of lower fees.’

Mr Halfon added of the row: ‘This has nothing to do with sexism – just fairness and value for money given the significant loan burden on students.

‘Taxpayers rightly want to know that these huge salaries are fair and in proportion.’

Professor Richardson’s pay package was recently criticised by one of her own bursars for being ‘grossly excessive’.