Justin Bieber and his wife Hailey put on a loved-up display during a fun-filled day off the coast of Cabo San Lucas.

The couple could hardly keep their hands off one another as they cuddled on board the El Discovery yacht on Wednesday.

Hailey, 25, dropped jaws in a skimpy floral bikini while her husband, 28, showcased his tattoos in a pair of purple trunks.

Making a splash! Justin Bieber and his wife Hailey put on a loved-up display during a fun-filled day off the coast of Cabo San Lucas

The couple tenderly held one another as they stood at the edge of the boat together and played around with one another for a bit.

As Justin stood at the very end of the vessel, Hailey playfully tugged at his arm.

The What Do You Mean? singer was obviously amused by the gesture as he flashed a smile.

Hailey looked stunning as usual in an itty bitty floral bikini which put her catwalk physique on full display. 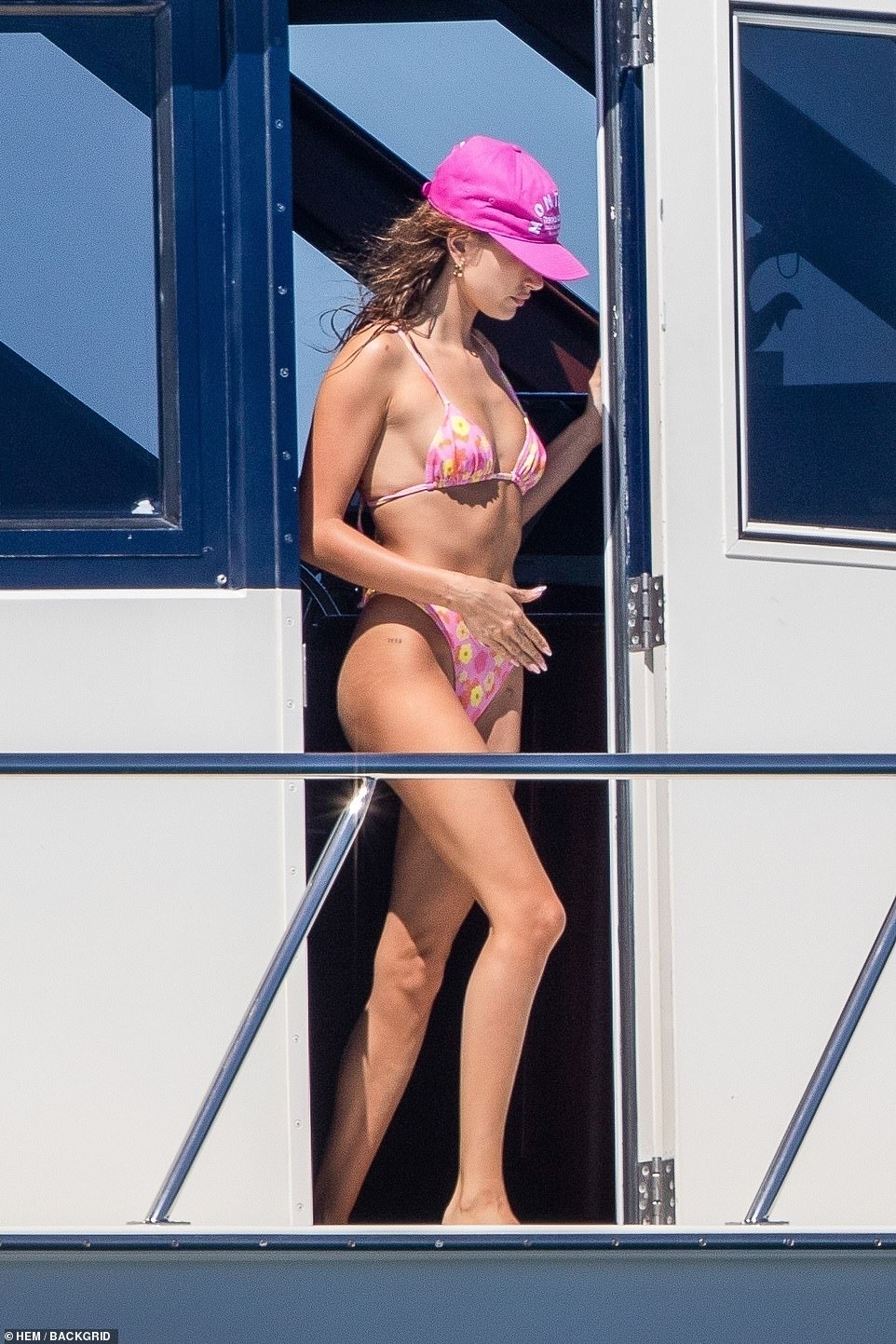 Flower power! The model put her catwalk physique on full display in an itty bitty pink bikini decked out in colorful flowers

Ab fab: She showed off her slender physique as she basked on El Discovery 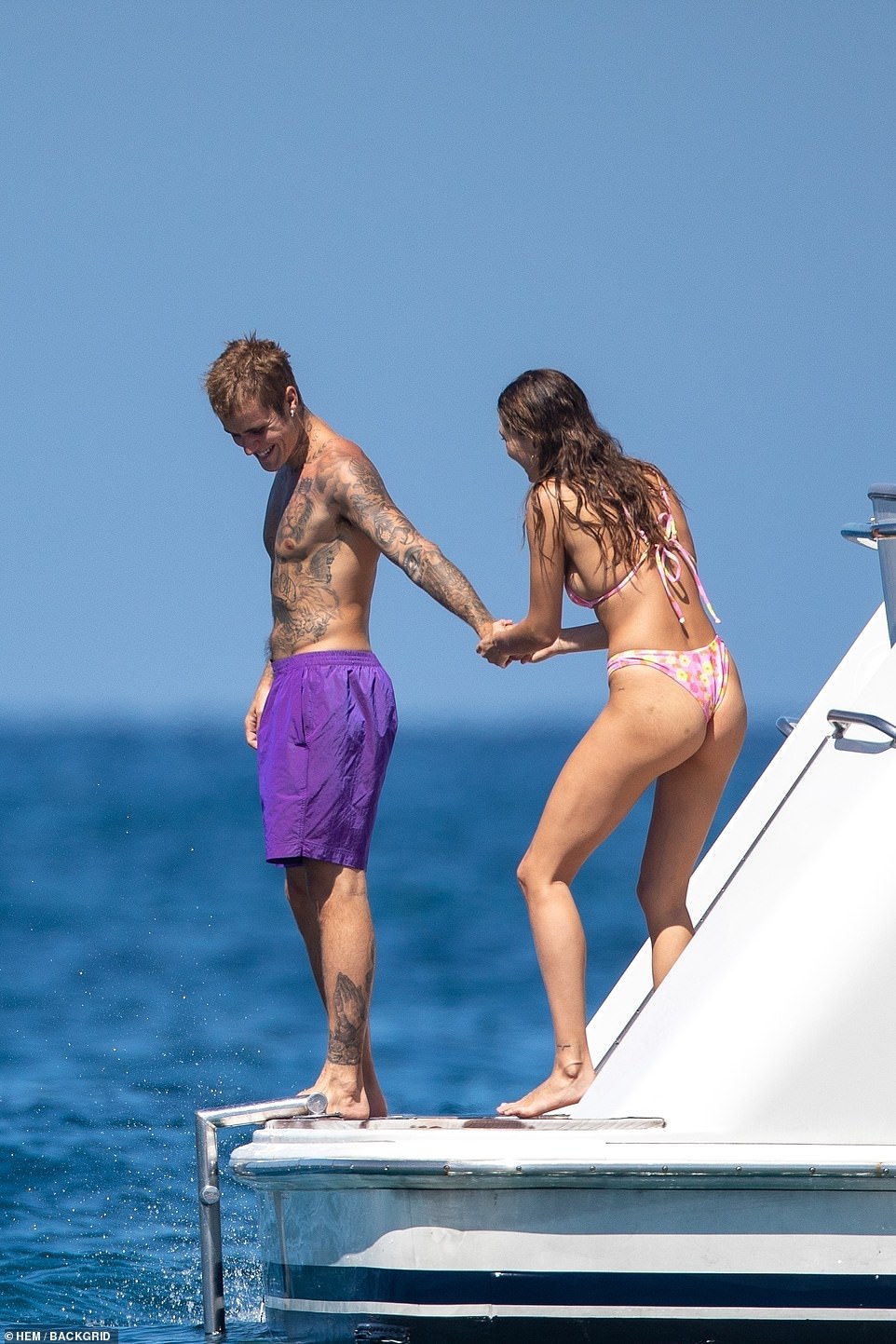 H2-Whoa! Hailey playfully tugged at Justin’s arm, much to his amusement

She propped a hot pink ‘Montauk’ cap over her wet locks.

Injecting a bit of glam, she rocked a pair of gold hoop earrings and a flawless manicure.

The lovebirds also enjoyed a bit of snorkeling. 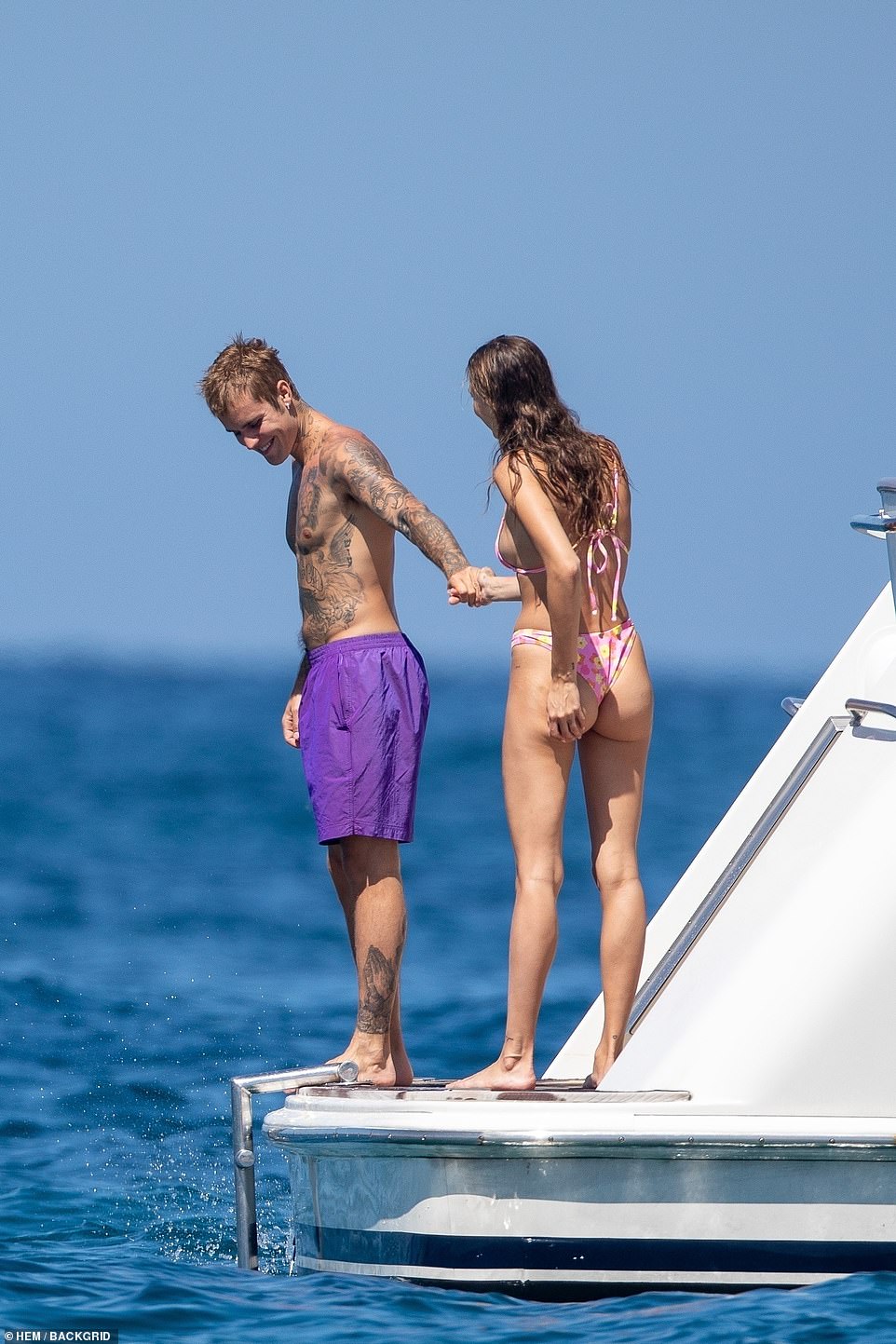 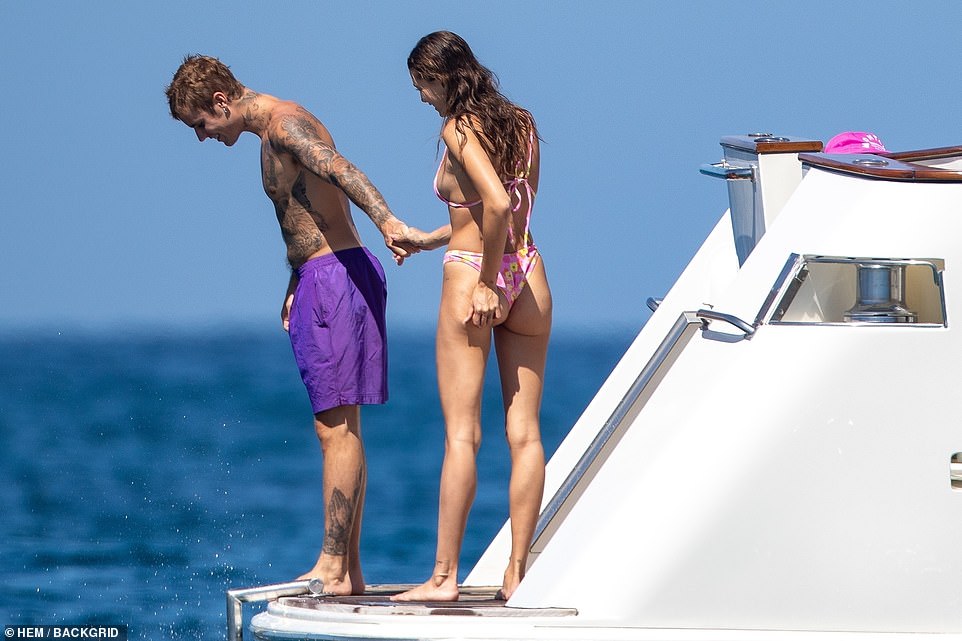 What lies beneath: Justin grinned as he gazed towards the water whilst grasping Hailey’s hand 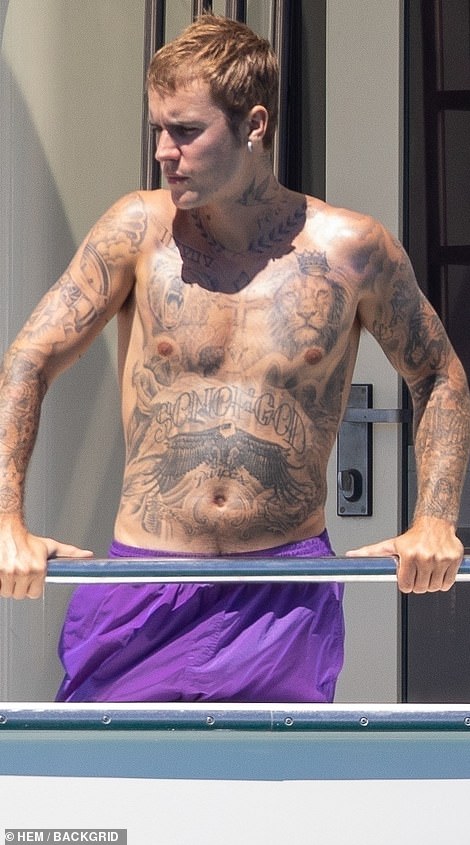 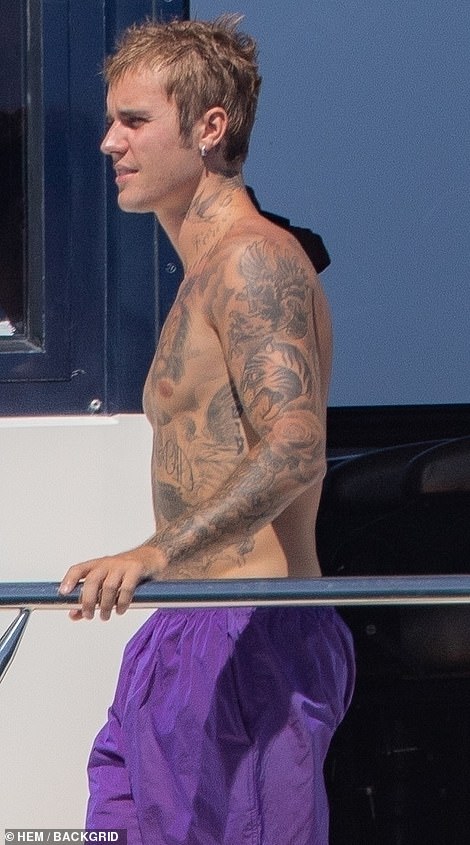 Hubba hubba! Bieber put his many tattoos and toned abs on display 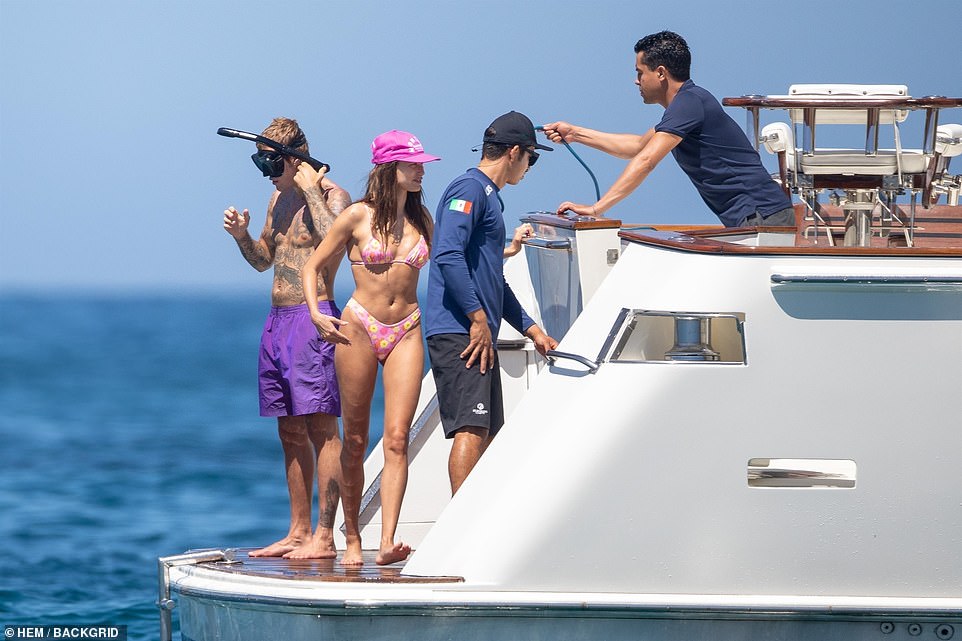 Taking the plunge! Bieber and his lady love were in for a snorkeling adventure

Justin placed his snorkel over his head before jumping into the water, his face later free of the mask.

He bobbed about at the surface of the water and waited for his wife to join him.

Hailey, now wearing the snorkel, appeared to cautiously approach the edge of the boat. 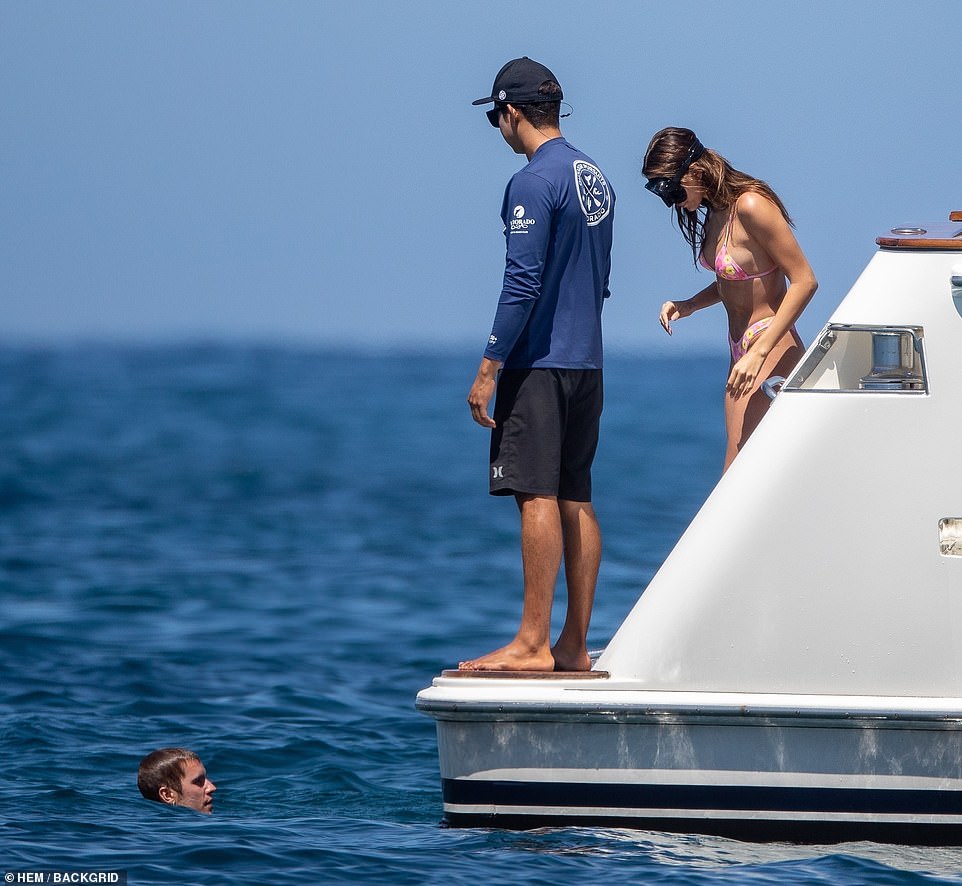 The water’s fine! The hit-maker waited for his leading lady to join him in the water 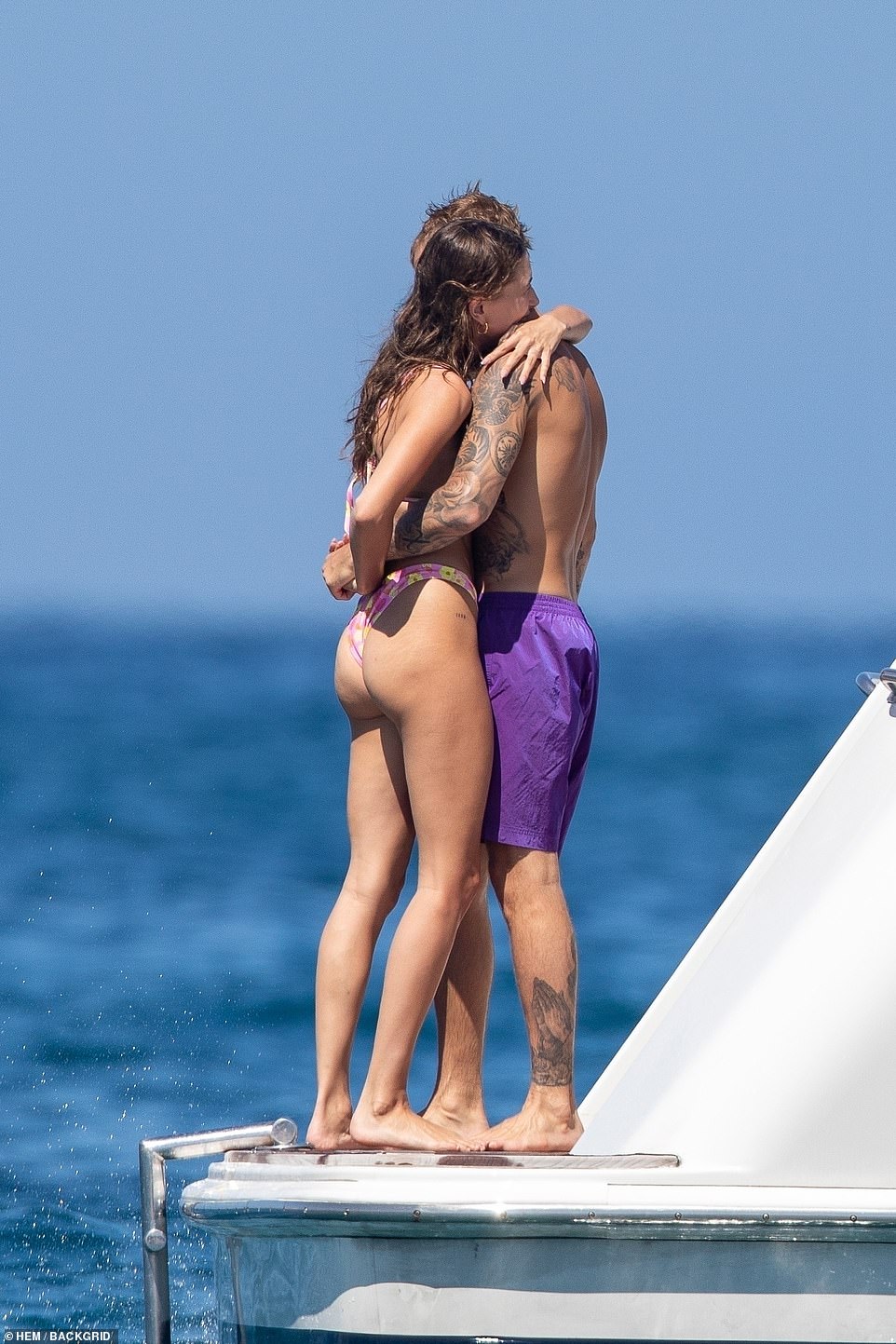 Loved-up: The duo shared a tender embrace beneath the sunshine 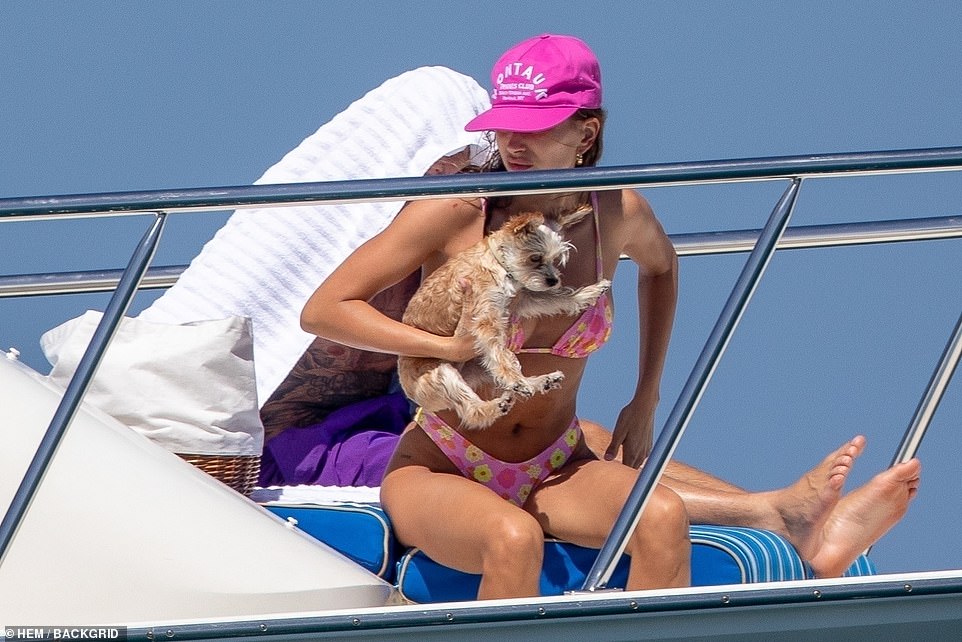 With their furry passenger! The couple brought along their dog Oscar 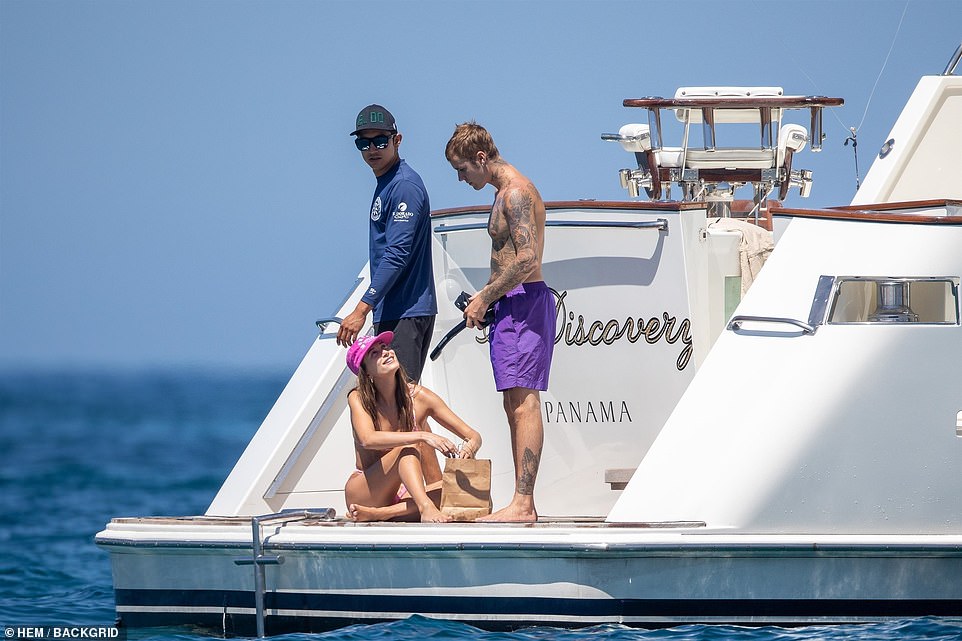 Fun in the sun! The model beamed towards her husband as she sat on the floor, digging through a paper bag

The couple were also joined by their beloved Yorkie, Oscar.

Hailey cuddled the dog as she and Justin sat on the deck of the boat, basking in the sunshine.

The couple are currently making the most of their time in Mexico, where Justin has two shows scheduled.

Justin and Hailey tied the knot in 2018 just months after becoming engaged and rekindling their romance.

They first married at a New York City courthouse in 2018 and tied the knot again in a lavish ceremony with friends and family present a year later. 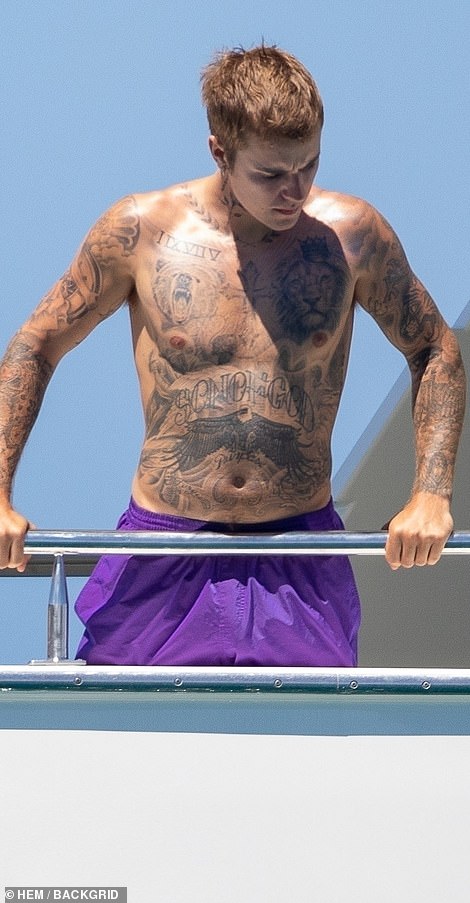 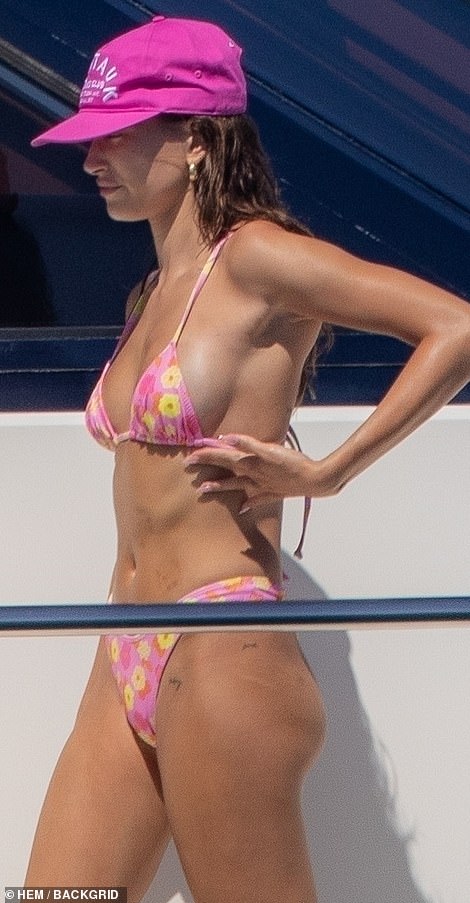 Sizzling display: Bieber put his many tattoos on display in his trunks while Hailey showcased her flat abs 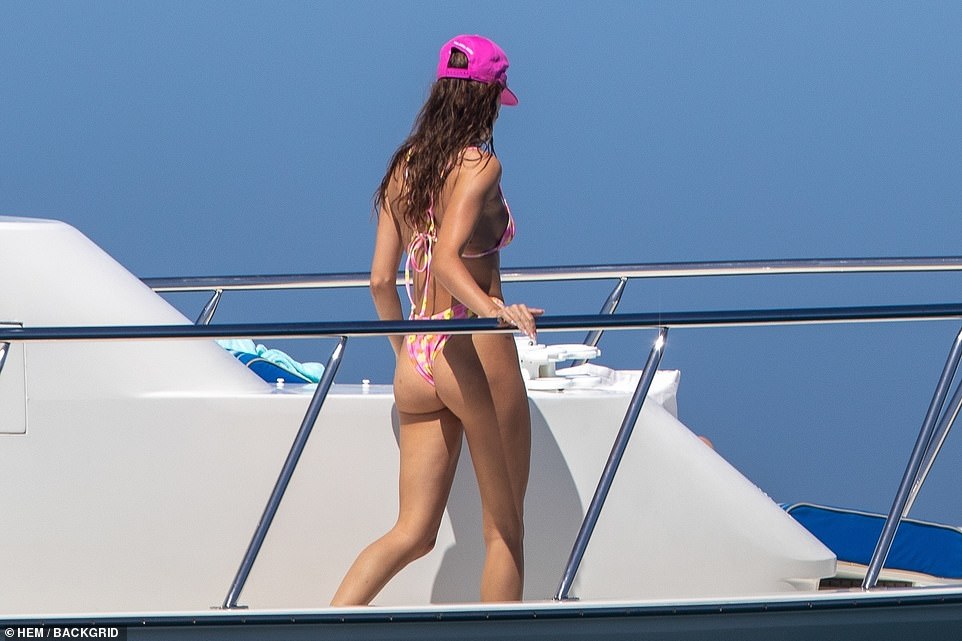 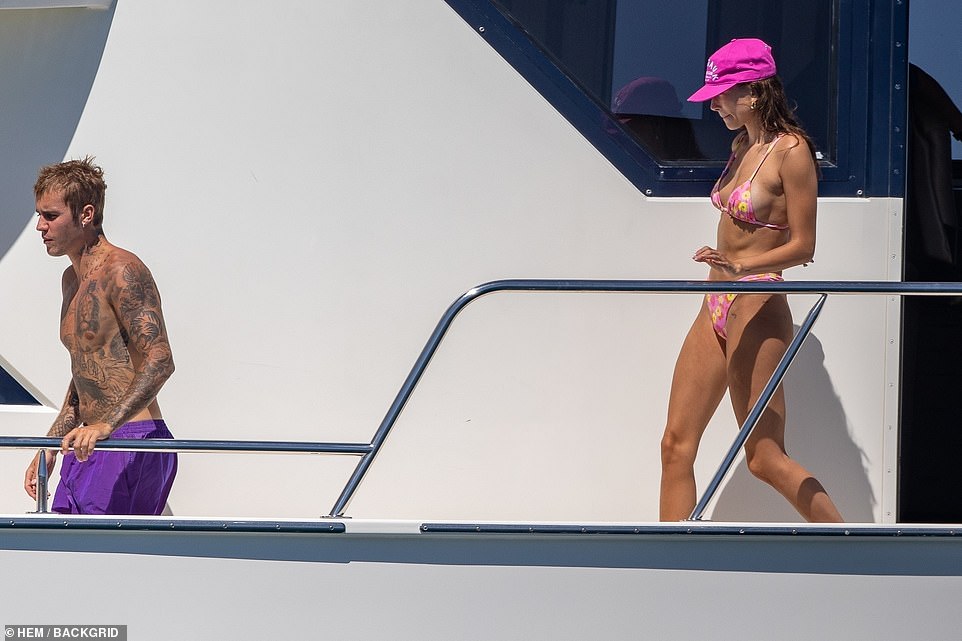 Earlier this year Hailey revealed was in no rush to have children.

‘I think ideally in the next couple of years we would try. But there’s a reason they call it try, right?’ she told the WSJ. Magazine in a story published in February.

‘You don’t know how long that process is every going to take. Definitely no kids this year, that would be a little hectic, I think,’ Hailey added.

‘There’s this thing that happens for women when you get married. Everybody assumes it’s: ‘First comes love, then comes marriage, then comes the baby,’ she explained. 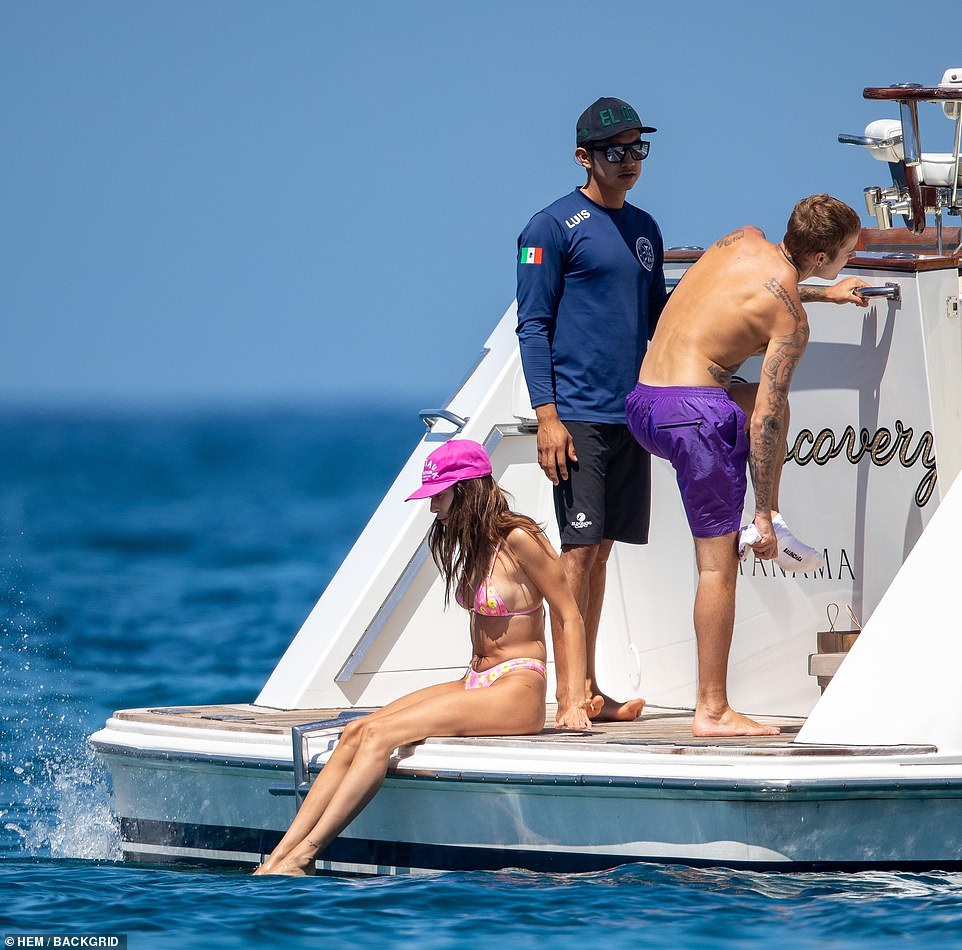 Making a splash! Bieber dipped her toes into the ocean blue

Music maker! Bieber had a tour stop in Mexico on May 26 and May 28 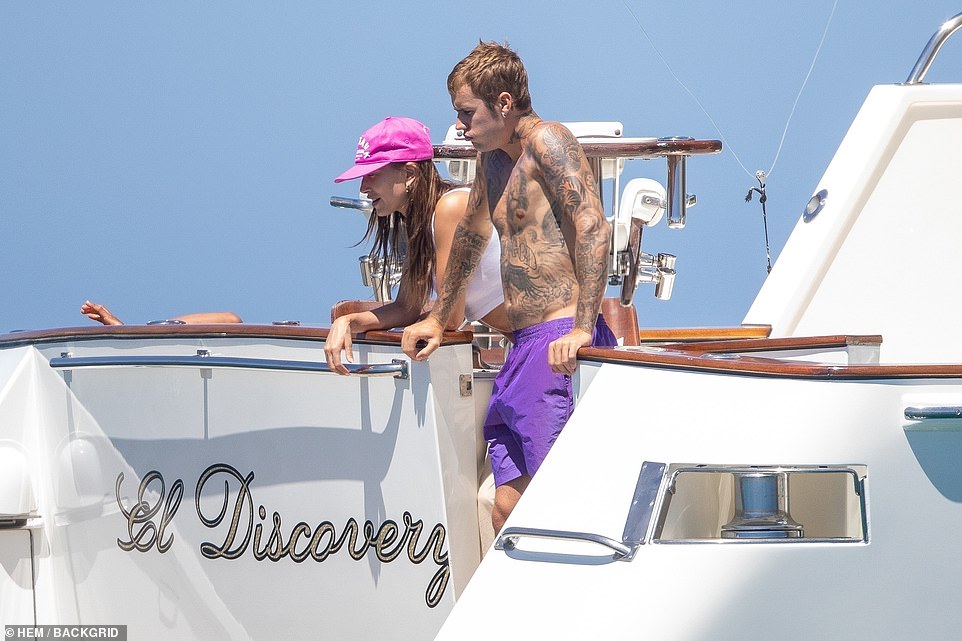 Sun-kissed: The couple relaxed on the deck of their stylish boat 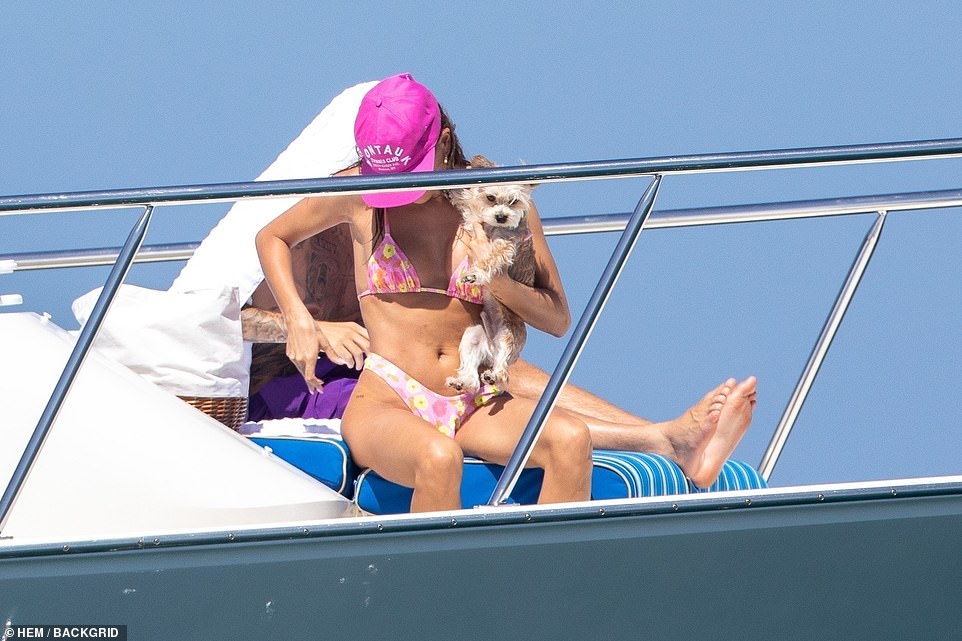 BFFs! The model held her pooch close as she relaxed by her beau, who propped a towel over his head 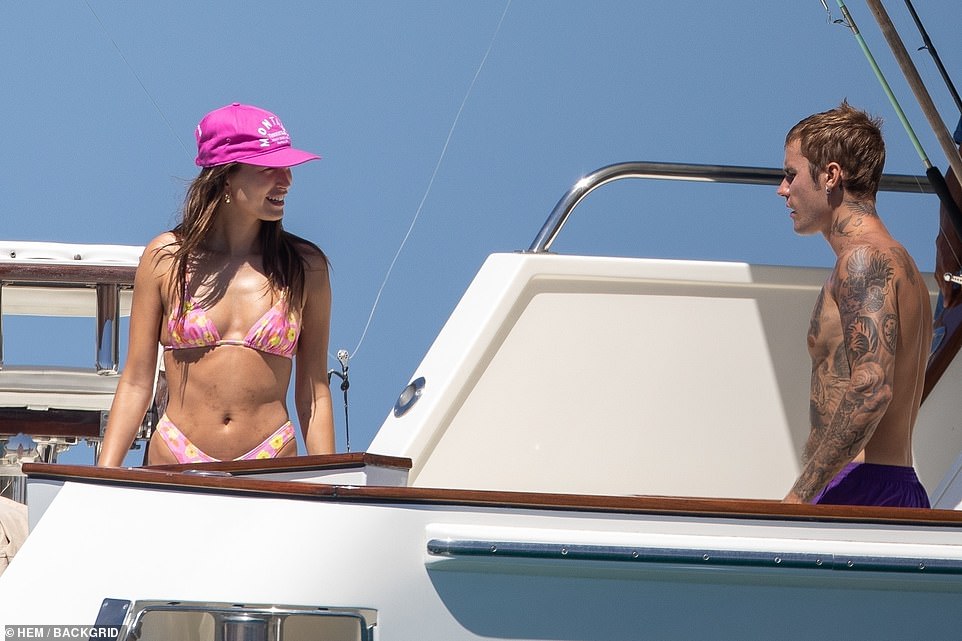 Family matters: ‘I think ideally in the next couple of years we would try. But there’s a reason they call it try, right?’ she told the WSJ. Magazine of having children