Justin Bieber, and his wife, Hailey Bieber, were spotted enjoying an afternoon stroll in Studio City earlier on Friday.

The Beauty And A Beat singer, 28, and supermodel, 25, opted for comfort during a daytime outing with the Rhode founder’s older sister, Alaia Baldwin, 29, and her toddler.

The talented performer was seen holding the baby in his arms, and at one point, laid a loving kiss on her head during the family excursion.

Family outing: Justin Bieber, 28, and wife Hailey Bieber, 25, were seen out and about in Los Angeles earlier on Friday

Justin kept his look casual and simple as he enjoyed the warm California weather, wearing a pair of Bode shorts along with a white, short-sleeved Casablanca Racing T-shirt.

The Peaches hitmaker added a pair of white slip-ons which he easily paired with tall, white ankle socks.

The star added a black Nike cap on top of his hair which he opted to wear backwards.

During the outing, Justin was seen lovingly carrying Hailey’s niece in his arms as they walked about the bustling city streets. 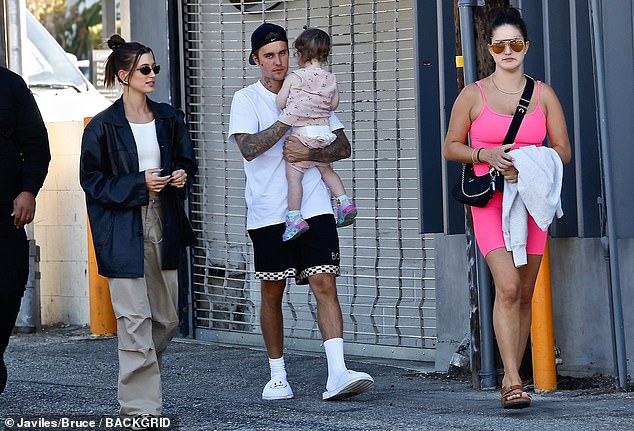 Cute! The Peaches singer was pictured carrying his wife’s sister, Alaia Baldwin’s, baby as they enjoyed an outing together on Friday afternoon 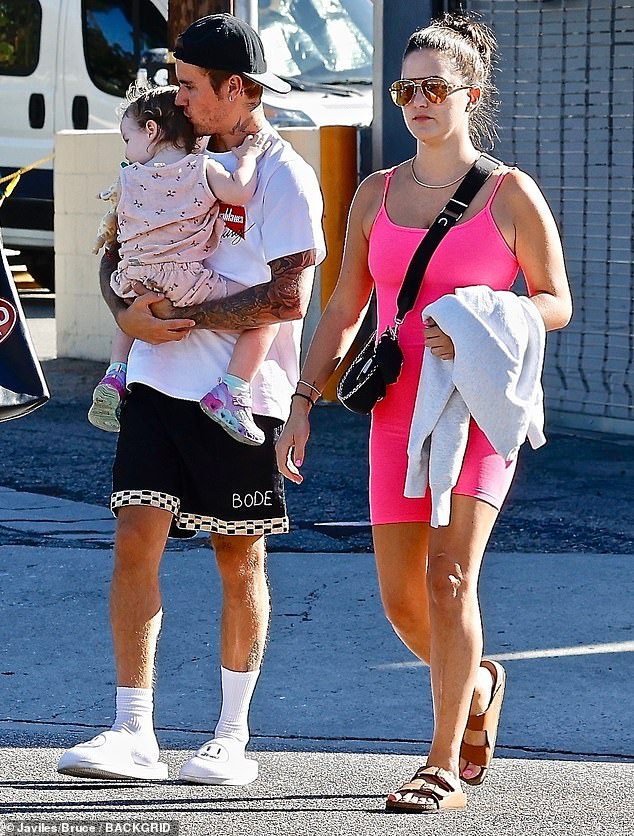 Adorable: The talented performer was spotted laying a quick kiss on the toddler’s head as they crossed a street 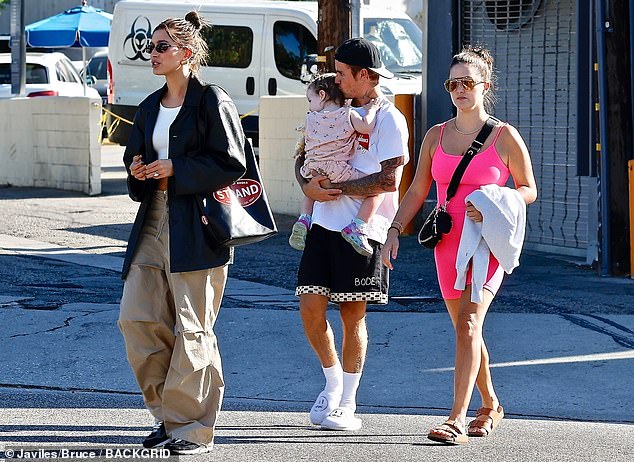 Loving: The star appeared to be more than happy to help out and hold Alaia’s toddler as they walked across the street

Hailey was fashionable for the Friday afternoon outing with her loved ones, and donned a pair of comfortable, baggy tan pants.

She added a white cropped top to flaunt her toned abs, and threw on a faux leather jacket on top.

The businesswoman slipped into a pair of white and black sneakers to make walking around the city easy and simple.

The beauty had a black tote bag slung over left shoulder with the word Strand on the front, representing the Strand Bookstore located in New York City.

Her hair was pulled up into a messy bun, showcasing a pair of small, gold earrings. Hailey also donned black sunglasses to protect her eyes under the hot sun.

Alaia opted for a pop of color, and wore a hot pink one-piece ensemble. She wore a pair of open-toed sandals and had a black cross-body bag slung over her shoulder. An off-white sweater was slung over her arm in case the afternoon grew a little chilly. 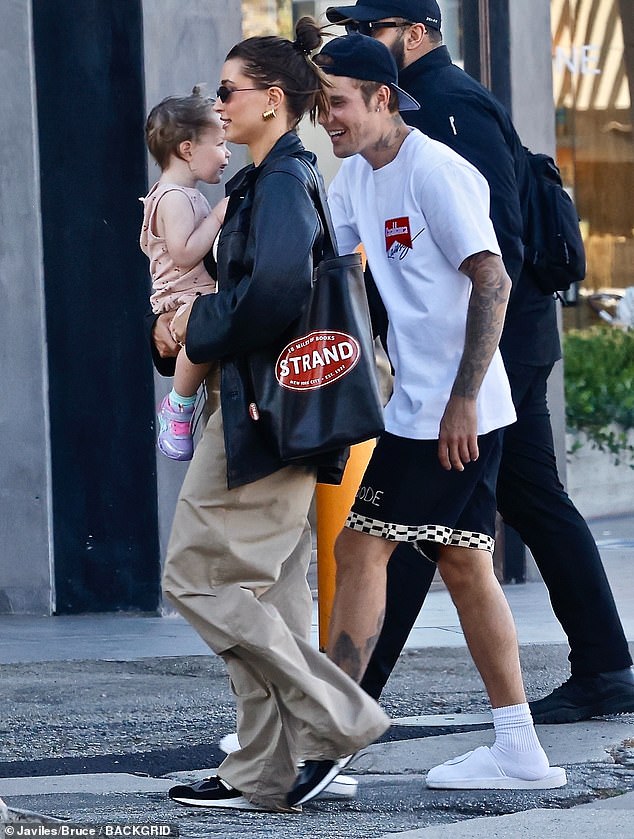 Having fun: Justin was all smiles as he briefly played with Hailey’s young niece as they enjoyed an afternoon stroll 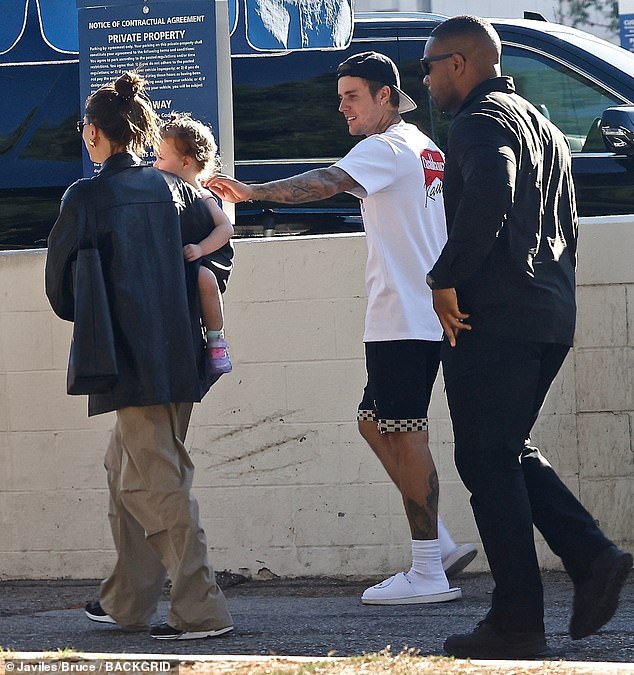 During the Friday outing in the busy city, Justin was spotted happily holding Hailey’s niece in his arms. At one point, he was spotted laying a kiss on top of the baby’s head.

Hailey also took her turn to hold the toddler, while the Love Yourself singer sent a smile towards the baby.

The supermodel opened up about the subject of starting a family of her own with Justin during an interview with the Wall Street Journal earlier this year in February.

‘I think ideally in the next couple of years we would try. But there’s a reason they call it try, right?’ she stated.

‘You don’t know how long that process is ever going to take. Definitely no kids this year. That would be a little bit hectic, I think,’ the Vogue model further added. 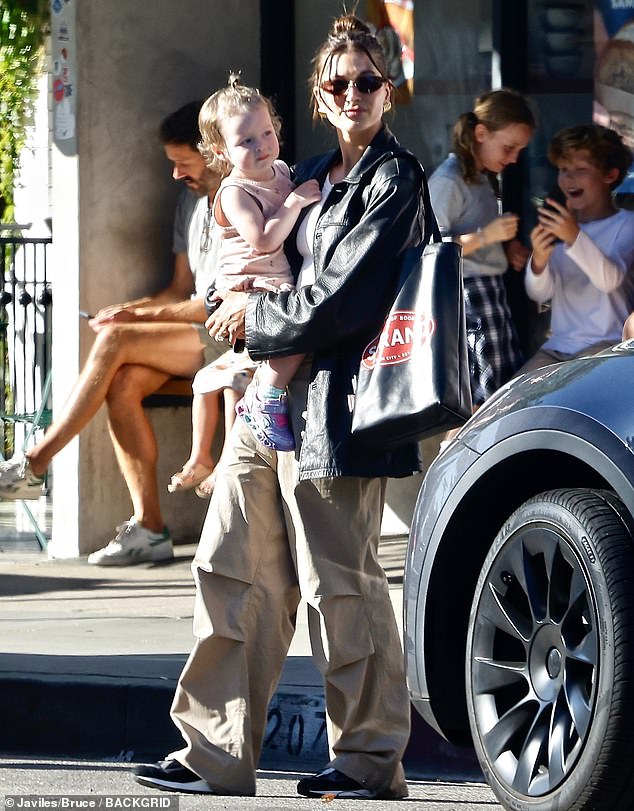 Future family: In an interview with the Wall Street Journal earlier this year in February, Hailey expressed, ‘I think ideally in the next couple of years we would try’ 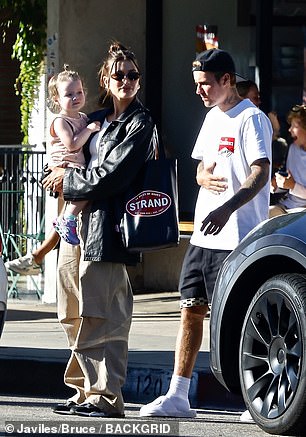 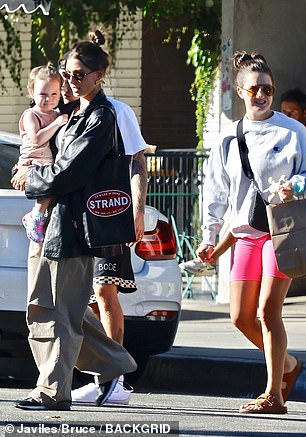 Enjoying the afternoon: Hailey and Justin appeared to be in high spirits as they enjoyed quality family time together

A recent episode of the Call Her Daddy podcast officially aired on Wednesday. The entrepreneur opened up about her relationship with Justin.

She also touched on the slight frenzy and allegations that have been made about Hailey taking the singer away from his ex-girlfriend, Selena Gomez.

‘I can say, period, point blank, I was never with him when he was in a relationship with anybody. That’s the end of it,’ the Rhode founder stated.

The former Disney channel star jumped to her own TikTok shortly after the episode aired due to backlash Hailey was receiving.

During a livestream, Selena slammed harsh comments from fans. ‘All I have to say is, it’s incredibly ironic that I would release something that is all about kind words, ’cause that’s exactly what I want,’ she expressed, referencing to her brand, Rare Beauty.

‘If you support Rare, I cannot thank you enough, but know that you are also representing what it means. And that is, words matter. Truly matter.’ 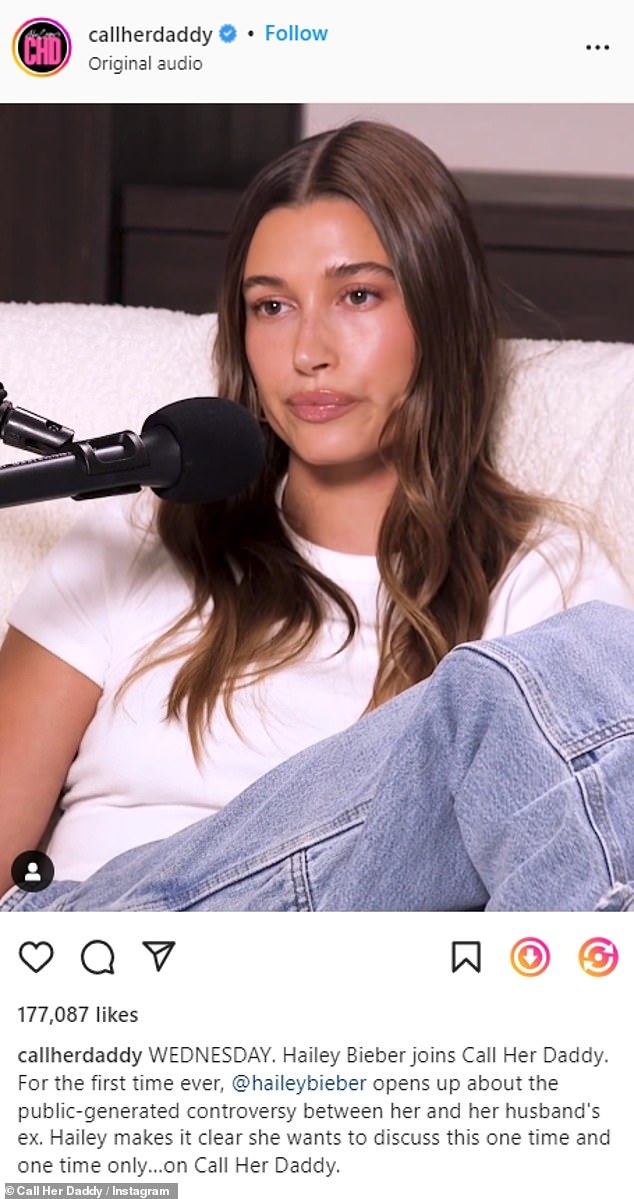 New podcast: An episode of the Call Her Daddy podcast recently aired on Wednesday, where the model opened up about her relationship with Justin, and the issues revolving his ex, Selena Gomez 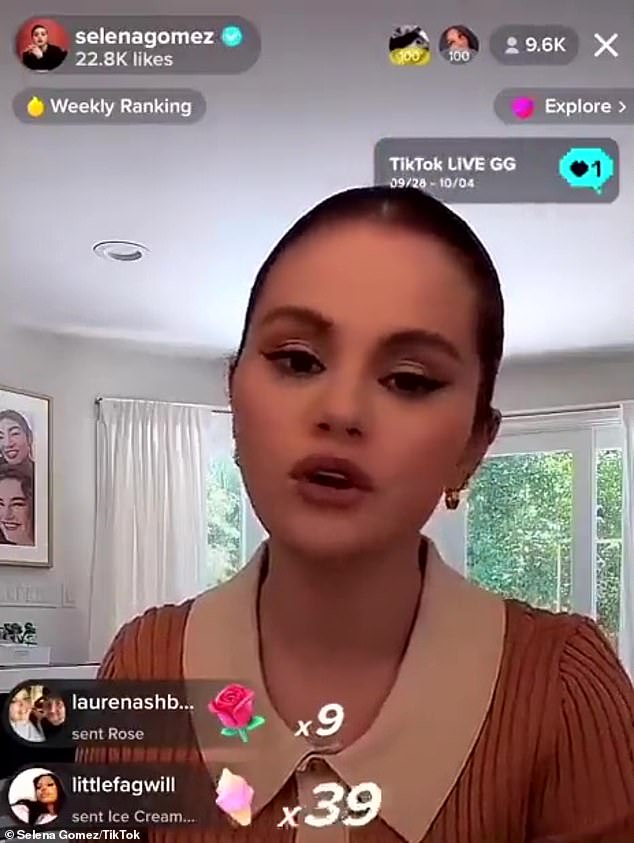 Shutting down backlash: Selena went onto a livestream on her TikTok to slam harsh comments following Hailey’s podcast interview, calling for ‘kind words’

Shortly before the podcast episode aired, Hailey was pictured making a show-stopping appearance in Paris during Fashion Week earlier Tuesday.

The talented beauty made a special guest appearance to watch the Yves Saint Laurent Womenswear Spring/Summer 2023 runway show in the heart of the stunning city.

Hailey opted to wear a short baby pink miniskirt, showing off her long toned legs. She added a matching cropped jacket to complete her stylish ensemble for the star-studded event.

The businesswoman slipped into a pair of black, chic heels while carrying a black handbag from the luxury brand. 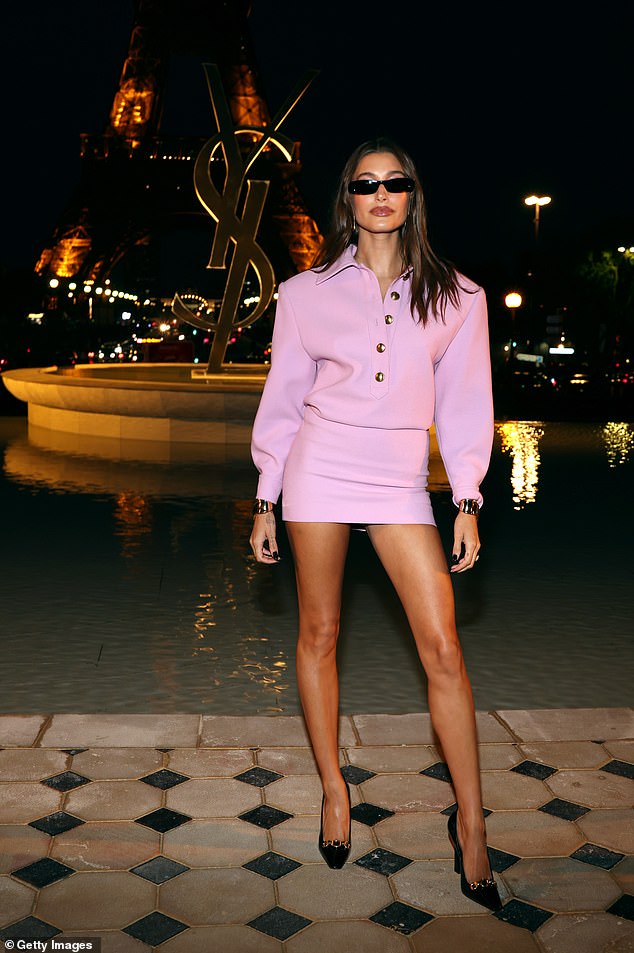