Justin Gaethje delivered the performance of his career to inflict a brutal beating on Tony Ferguson and set up a mouth-watering showdown with Khabib Nurmagomedov for the lightweight title.

The underdog dominated from the vicious start to the bitter end in the controversial behind-closed-doors event before referee Herb Dean mercifully stepped in to stop Ferguson taking any further unnecessary damage.

In the bizarre surroundings of an empty arena, in a show staged in the middle of a global pandemic, the action was so captivating for 21 minutes that is was easy to forget the eerie stillness of a huge main event without any fans watching on. 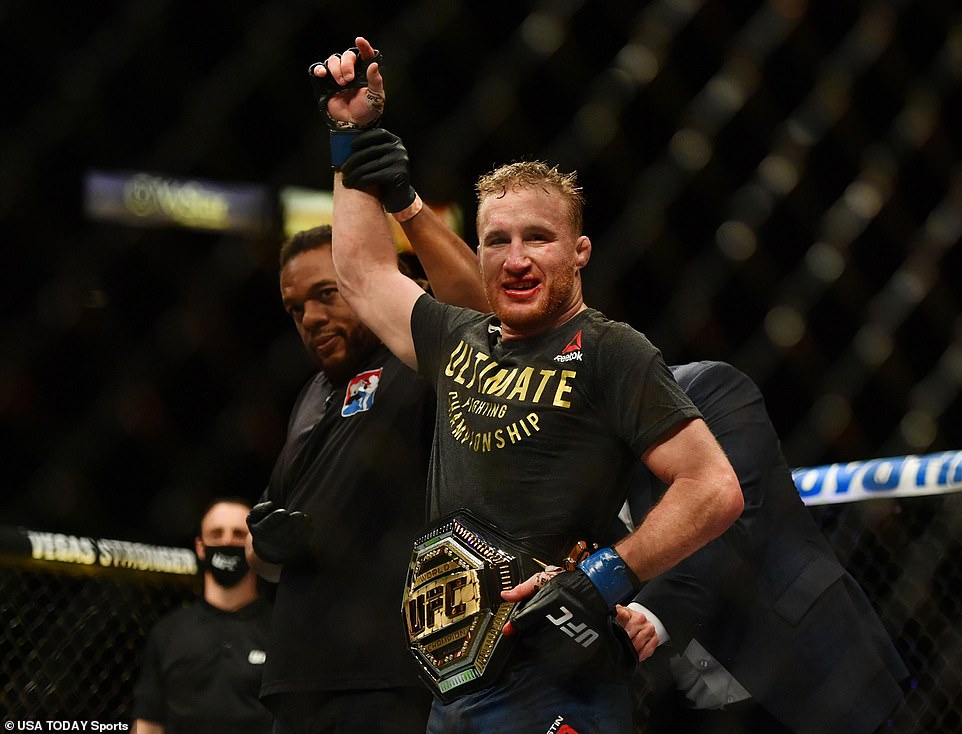 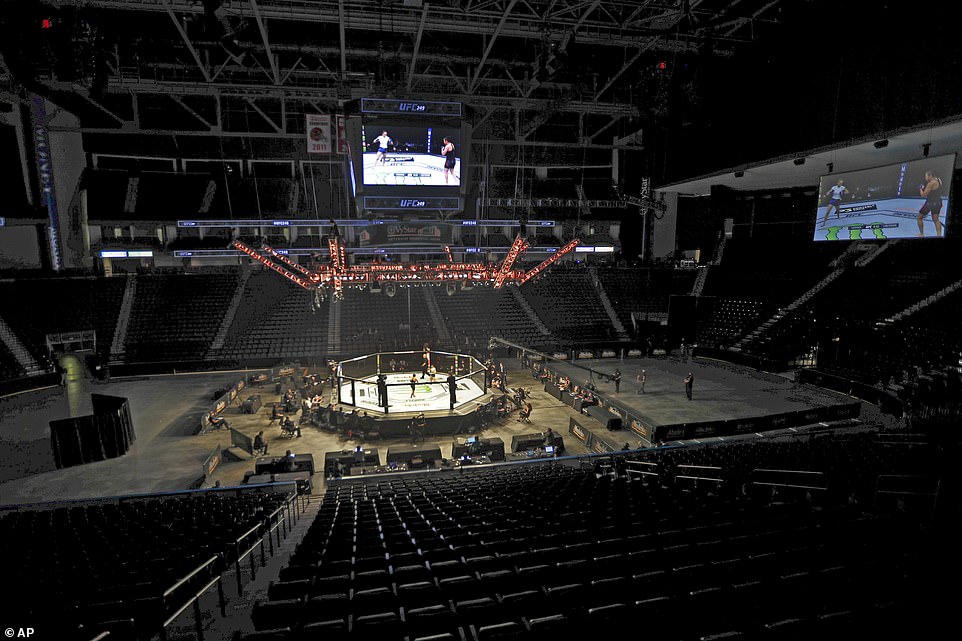 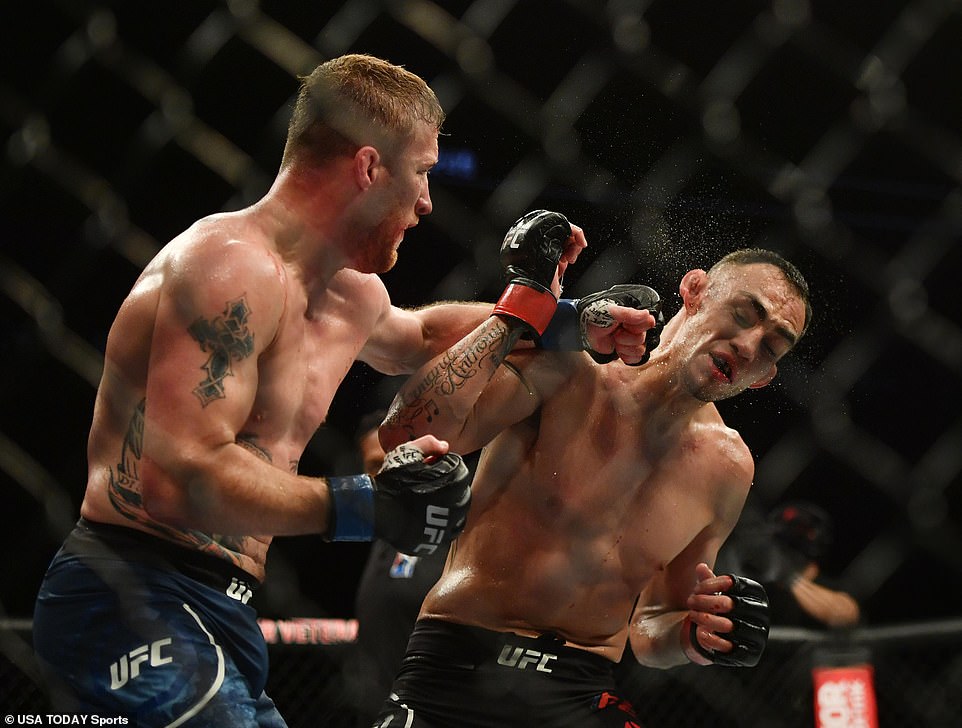 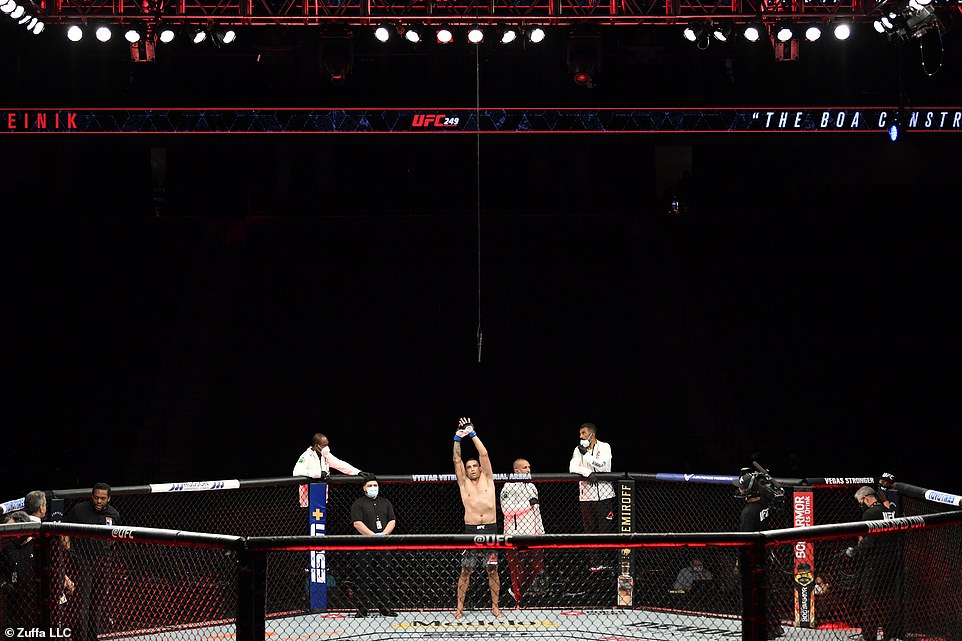 Only the yells from each man’s corner and the echoes of their thunderous strikes could be heard above the television commentary.

It was Gaethje’s resounding the loudest. He scythed down Ferguson’s lead leg repeatedly and ‘El Cucuy’ winced with every shattering blow inside the cavernous VyStar Veterans Memorial Arena in Jacksonville.

The former collegiate wrestler picked the favourite apart in every round and lesser men would have been battered unconscious long before Dean saved the beaten man.

Ferguson connected with a thudding upper-cut at the end of the second round, sending Gaethje to the mat but that proved to be a rare moment of joy for the man who tasted defeat for the first time in seven years.

When the end came, it was a welcome one for those watching, though Ferguson would have wanted to go out on his shield. Gaethje pummelled Ferguson with two meaty blows in succession and the Mexican-American shook his head, with his body language clearly signalling that there was very little left in the tank.

One more clean punch was enough for the vastly experienced Dean to wave it off and send Gaethje scampering over the octagon in excitement. 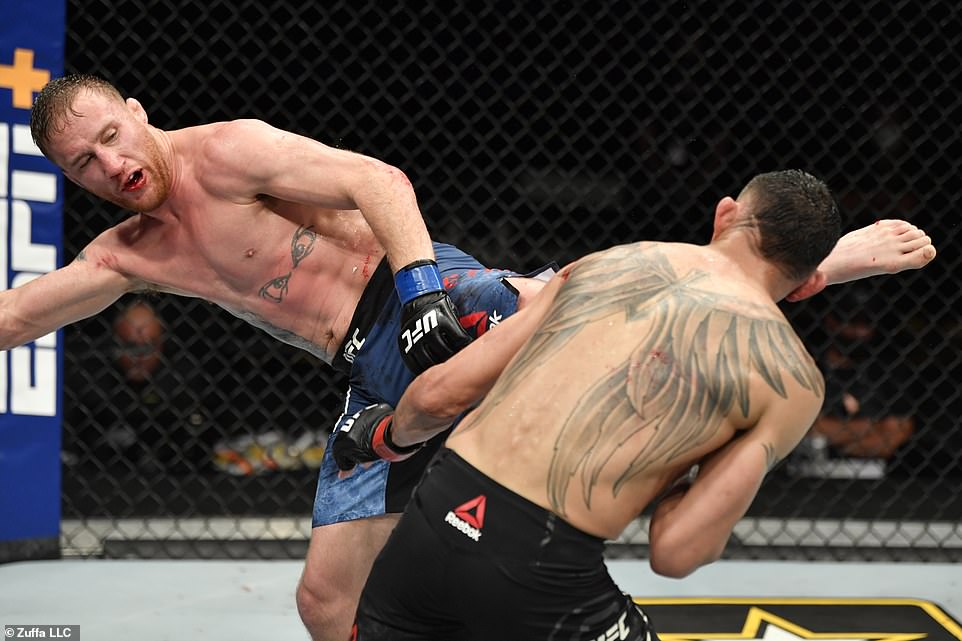 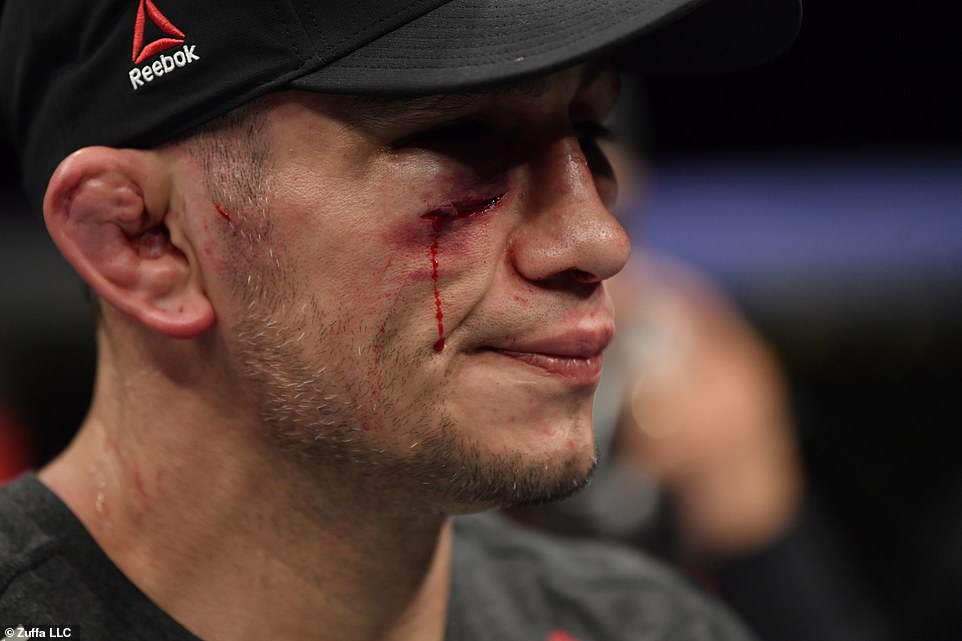 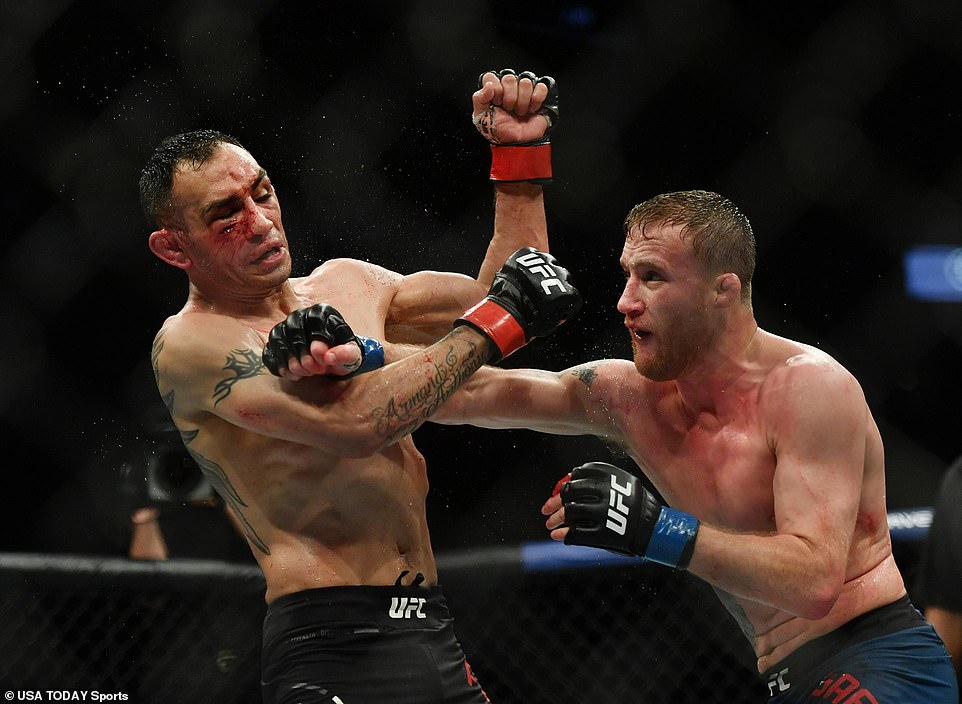 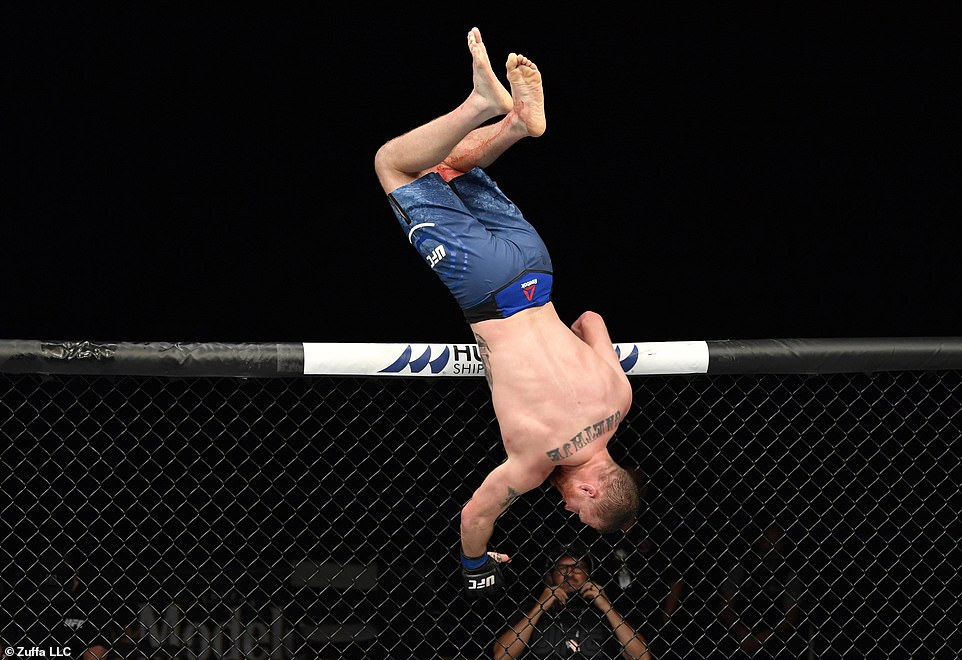 In the post-fight interview, he was asked why he so readily shook off the interim belt given to him by UFC president Dana White and simply replied that he ‘wanted the real thing.’

His fight with Khabib will be a supercharged one and the undefeated champion took to Twitter straight after watching from Russia, where he remains stuck on lockdown and unable to compete against Ferguson himself.

The Russian simply wrote: ‘No comment,’ but then followed up with: ‘It was so impressive, congratulations. Very smart fight.’

It was a testament to the quality of the action that the lack of atmosphere could be put to one side. The skeleton broadcast crew, a handful of media, coaches and athletic commission officials were the only personnel allowed into the arena and all had been tested for Covid-19. 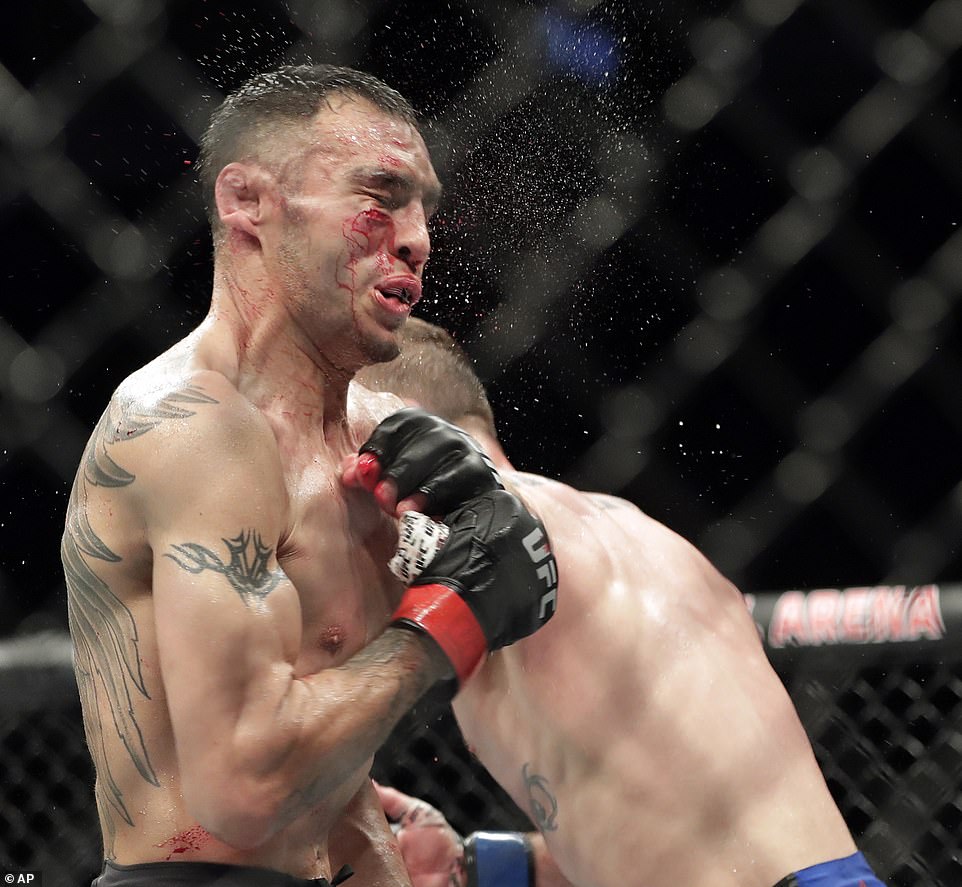 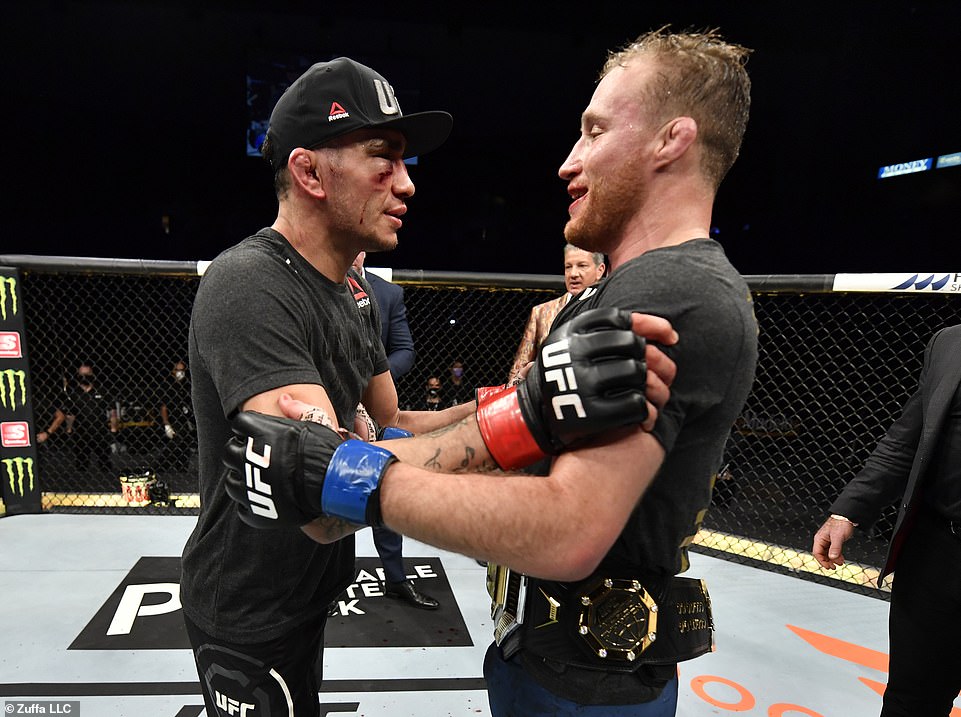 The event might have been derailed at the last hour as Jacare Souza tested positive for the virus that has killed more than 75,000 in the United States. But the show went on and the UFC became the first major organisation to hold a sporting event during the pandemic.

Broadcasters were sat at different tables from their colleagues and more than one fighter said they’d adapted their gameplan having been able to hear the analysis from the commentary team during their fights.

In the co-main event Henry Cejudo defended his bantamweight title against future Hall of Famer Dominick Cruz and then announced his shock retirement.

He decided to call it a day at the early age of 33, is happy with his many accomplishments and spoke about wanting to start a family.

The champion finished off Cruz in the second round, putting the veteran down with a perfectly placed knee and then following up with 11 unanswered punches. 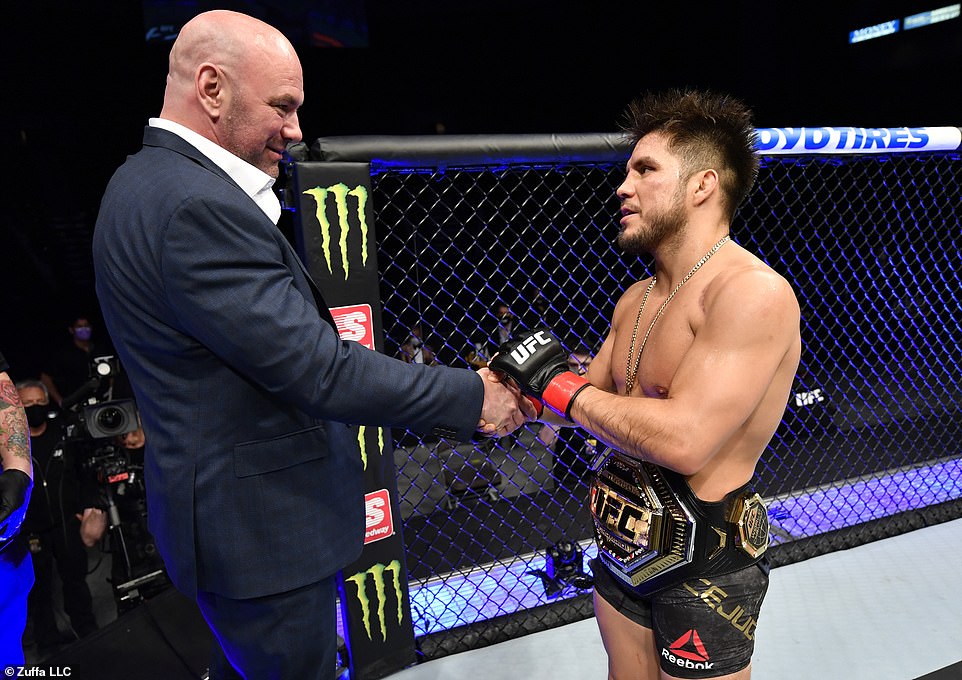 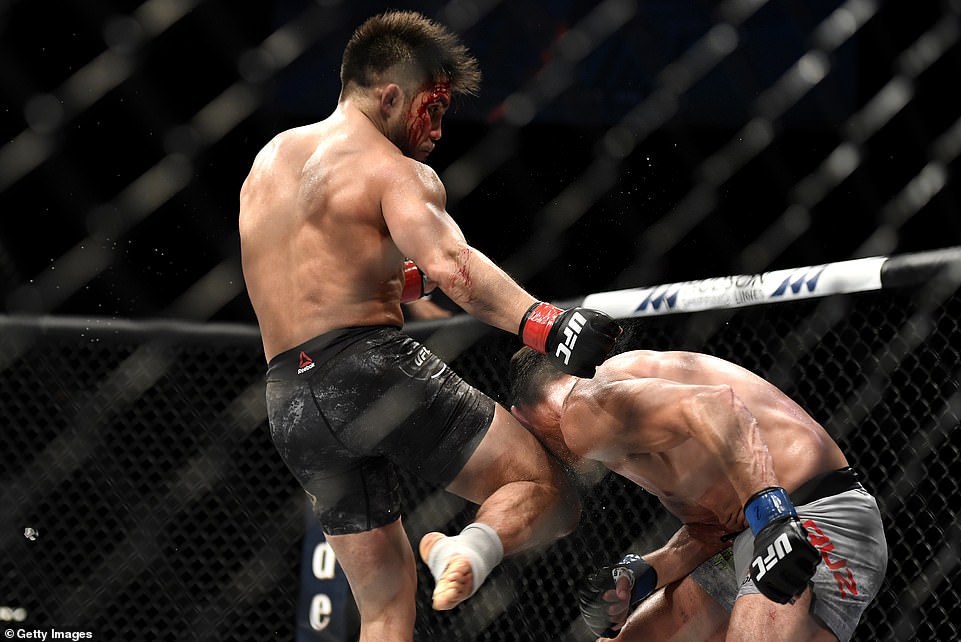 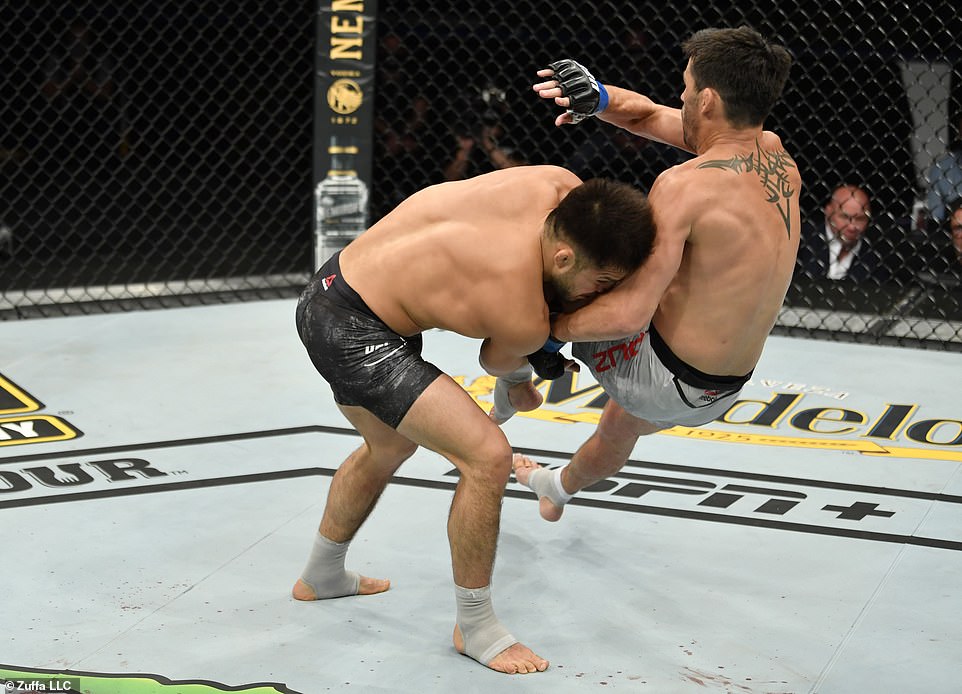 There were questions over a potentially early stoppage and Cruz made the point afterwards that he was getting to his feet when the referee waved it off.

But the call went in Cejudo’s favour and he reiterated his claim to being the greatest combat sports athlete of all time. If his retirement is legitimate, the UFC and MMA will sorely miss him.

Jairzinho Rozenstruik will be cursing his decision to call out Francis Ngannou.

Ngannou showed why he is the most feared powerhouse in the UFC with a 19-second knockout win to send shockwaves through the heavyweight division.

The Cameroon-born Frenchman is surely in the mix for another title shot now. He stormed forwards, connected with a left hand and that was all she wrote. Rozenstriuk won’t thank his opponent for the follow up shots that were landed before the referee could haul him away. 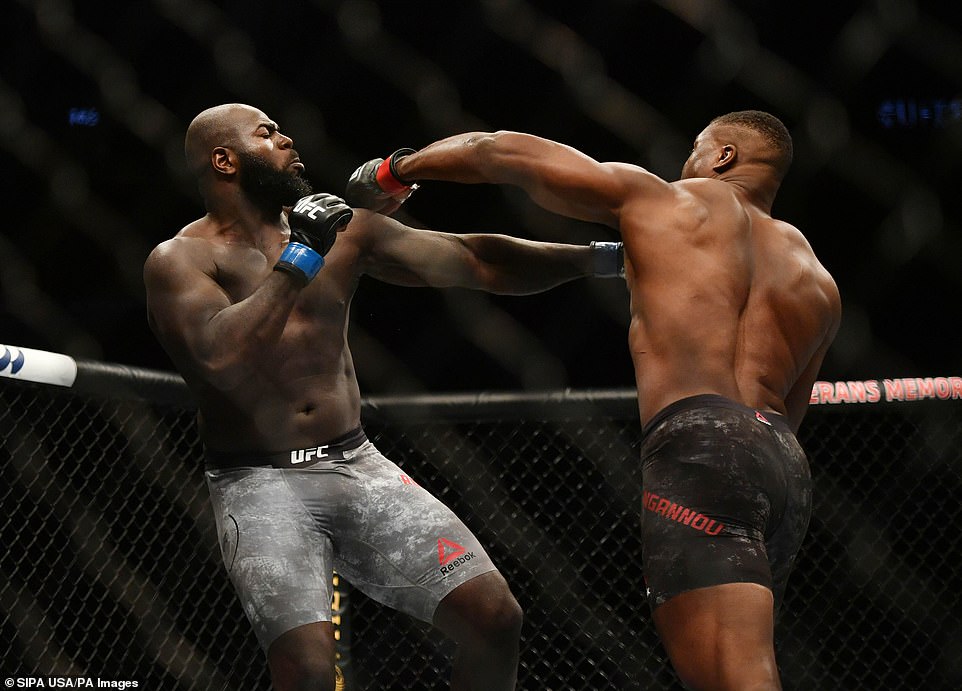 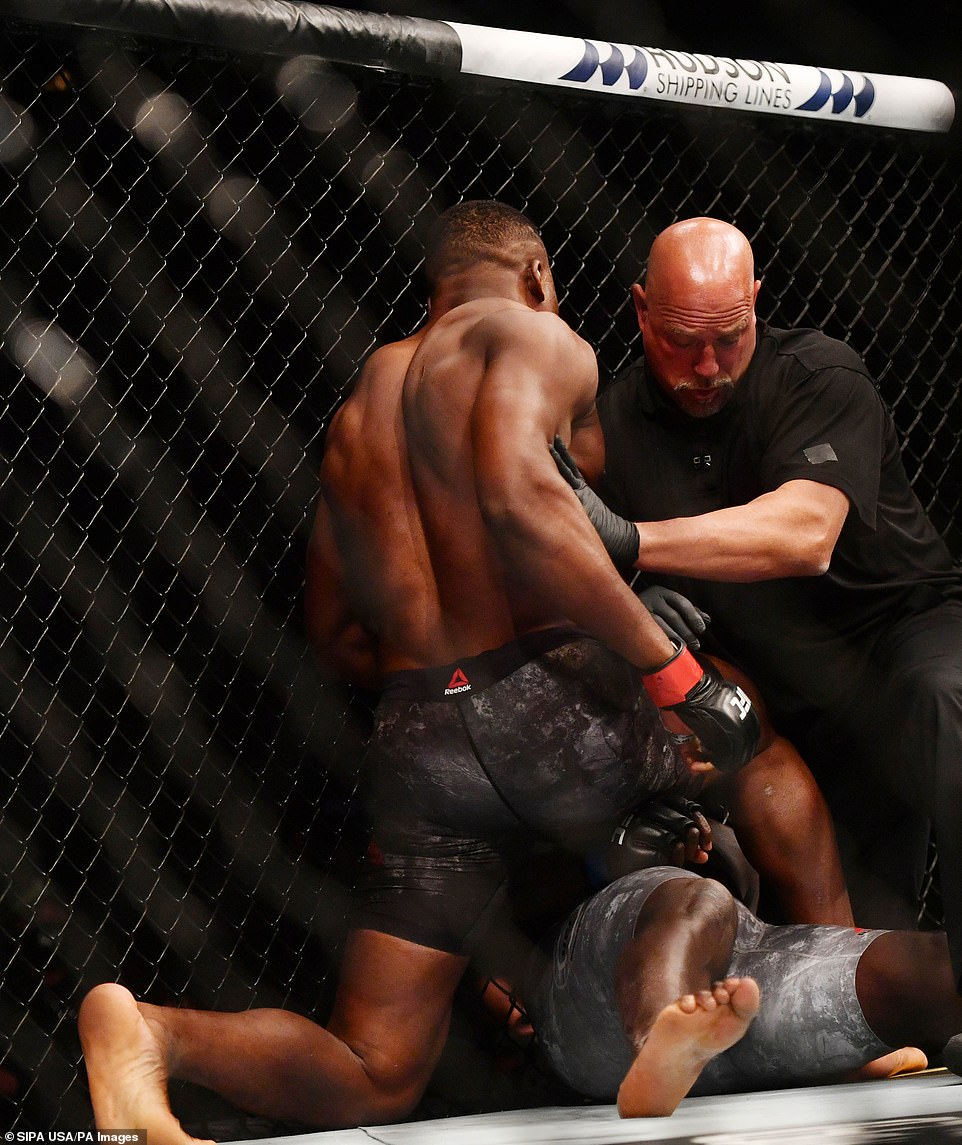 Both men battled hard in an evenly contested opener but in the second Kattar planted a step-in elbow on his opponent’s jaw, sending him disorientated to the mat.

He dived in to land a couple more shots on the ground to force the referee’s intervention, opening up a nasty cut to give insult to injury for Stephens, who was the only fighter on the card to miss weight. 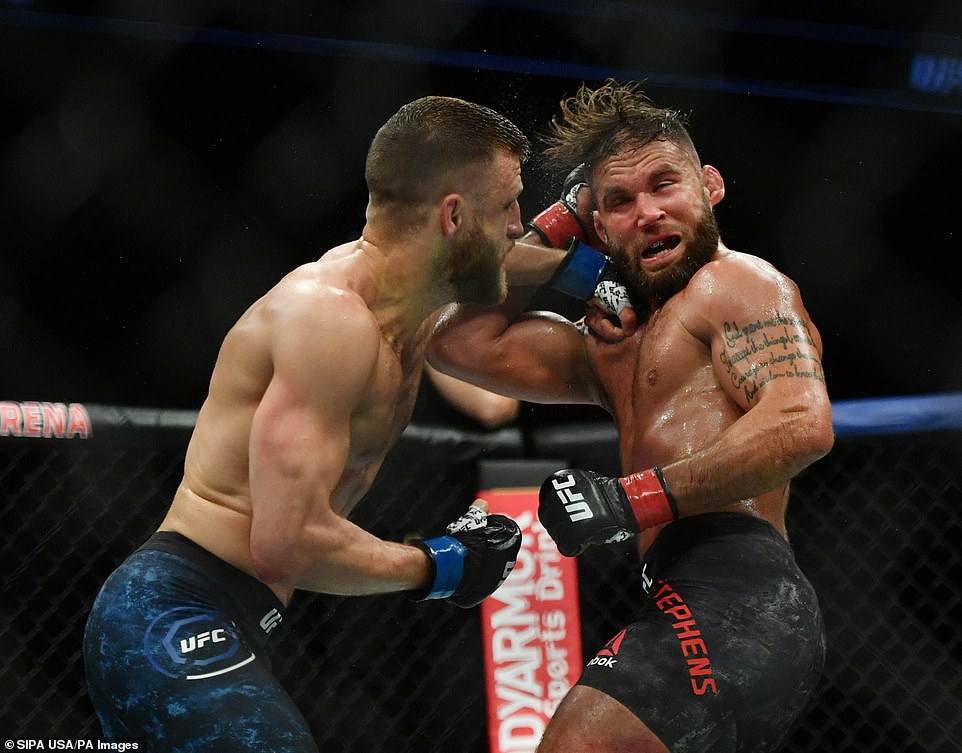 Greg Hardy kicked off the main card with an unanimous decision victory over Yorgan de Castro. It was another significant step in the right direction for the former NFL star with only two years of experience in the sport.

He took a huge early leg kick to the knee but managed to show great composure, overcoming the early adversity to coast to the win.

All three judges scored it 30-27 in his favour and in the post-fight interview he noted that he heard the commentators talking about how he needed to block the kicks heading his way, changing his tactics mid-fight after picking up the information. 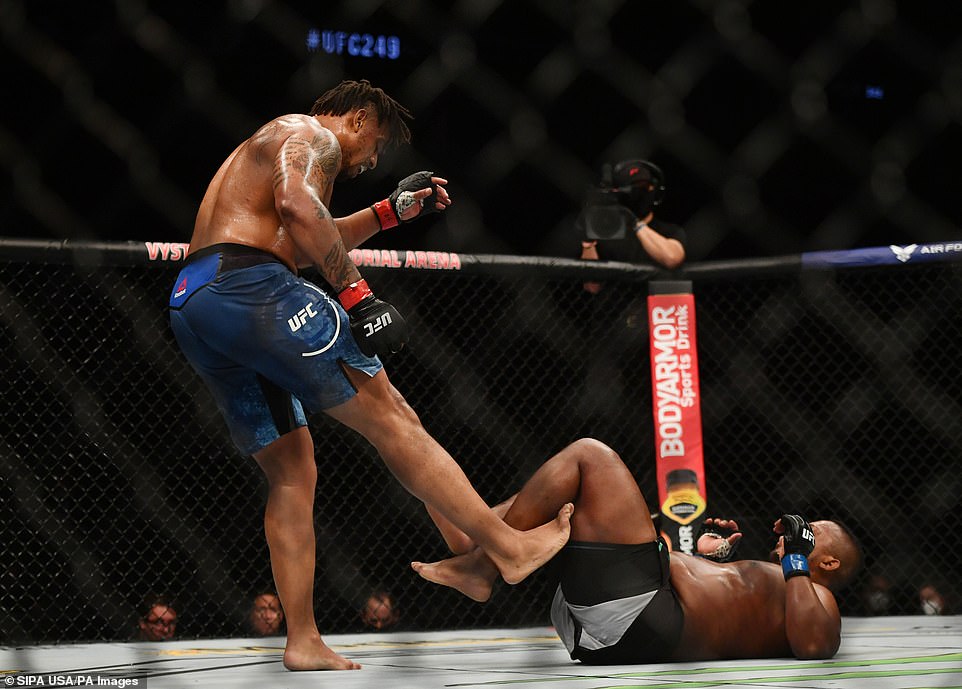