A bare knuckle fighter has died in hospital six weeks after a brutal 19-second knockout left him partially paralyzed.

Justin Thornton, 38, was taking part in the Bare Knuckle Fighting Championship (BKFC) 20 in Biloxi, Mississippi on August 20 when he sustained a brutal KO defeat.

His opponent Dillon Cleckler caught him with a vicious right hook just 19 seconds into the first round, sending him face-first to the canvas before the referee quickly halted proceedings and rushed to his aid. 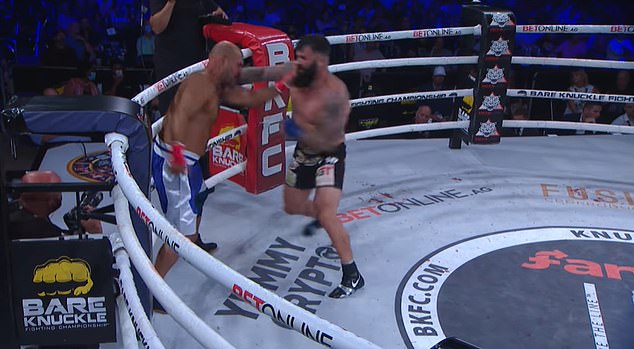 According to his Facebook page, where a GoFundMe was set up shortly after the fight, Thornton was taken straight to hospital and was partially paralyzed and put on a ventilator for several weeks.

In the message, posted by his on-off girlfriend Amber Willard, it was revealed that he was ‘on ivs for infection in his lungs and medication for his spinal cord injury’ but was able to ‘watch his favorite tv shows and movies and make jokes’.

It has now been confirmed that Thornton succumbed to his injuries on October 4, six weeks after the officially-sanctioned bout. 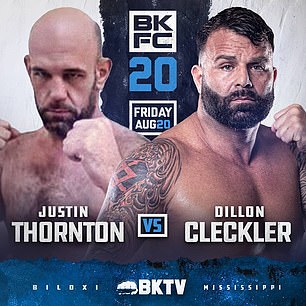 The fight poster ahead of BKFC 20, which promoted Thornton’s bout with Cleckler

In a statement to MMA Fighting, BKFC president Dave Feldman said. ‘This morning we were very saddened to be notified of the passing of one of our fighters, Justin Thornton, who competed at BKFC 20 on August 20, 2021.

‘We join the rest of the combat sports community in sending our deepest condolences to his family and loved ones.’

Thornton had a 6-18 record in his MMA career, and had previously fought several recognizable names, including UFC heavyweights Chase Sherman and Walt Harris, as well as Contender Series veterans Michael Lombardo and Austen Lane.

In response to Thornton’s death, many around combat sports are BKFC for using Thornton, who had suffered five consecutive first-round defeats before his fatal bout.

‘Sincere condolences to the family of Justin Thornton,’ tweeted boxing promoter Lou DiBella. ‘This fatal night was his SIXTH CONSECUTIVE FIRST ROUND STOPPAGE. The 38 year old survived the first five. The state of combat sports regulation in America is atrocious.’

‘THEY BOOKED A MISMATCH BETWEEN AN 11-1 FIGHTER VS A 6-18 FIGHTER AND THIS IS THE RESULT,’ tweeted one fan, referring to the promoter, BKFC. ‘Their license should be revoked.’