Their seven year marriage has been under scrutiny for weeks.

But it appears that Justin Timberlake and Jessica Biel really want to put the former boybander’s drunken PDA with a female co-star behind them.

The celebrity couple put on a very public show of unity on Sunday as they stepped out together in New York City.

Going strong: Justin Timberlake and Jessica Biel stepped out together in New York City on Sunday in a very public display of unity as they seek to put to rest rumors about their marriage

Justin, 38, and Jessica, 37, wore big smiles as they strolled along with Jessica hanging onto her husband’s arm.

They exchanged plenty of loving glances, emphasizing that their relationship has weathered the storm created by Justin’s indiscretion.

The two, who share a four-year-old son Silas, even mirrored each other’s style.

Both donned knit hats and reflective sunglasses along with dark winter coats. 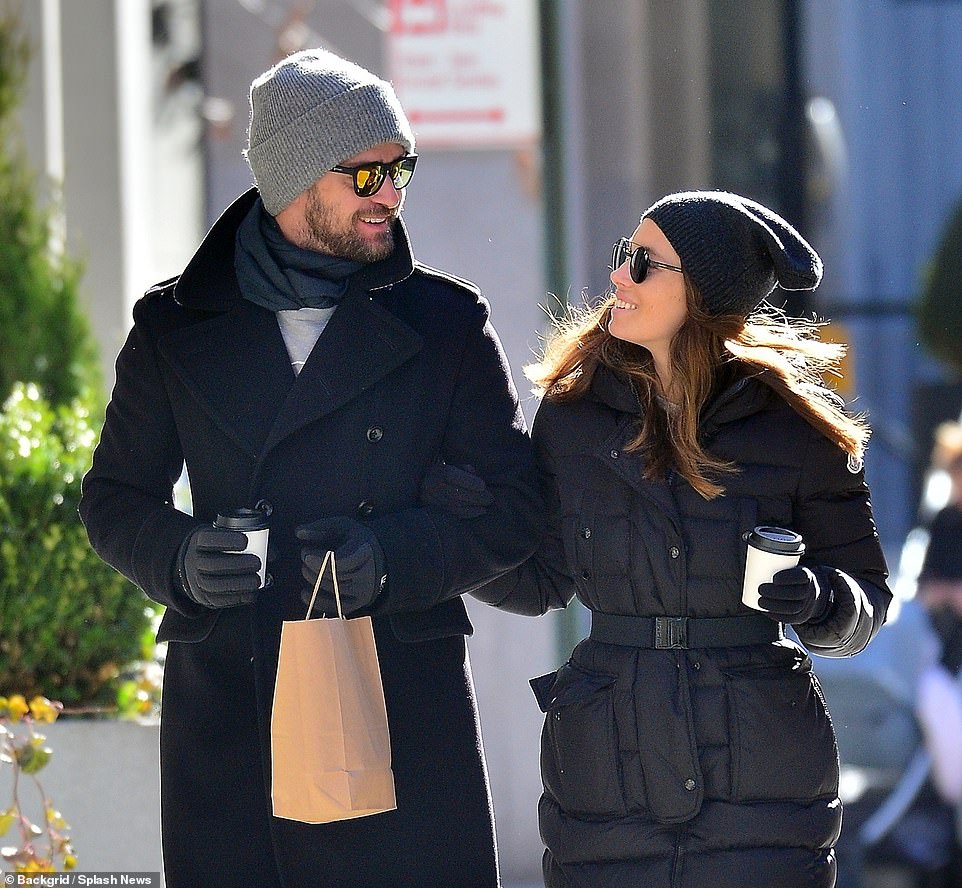 All mended: Justin, 38, and Jessica, 37, wore big smiles as they strolled along with Jessica hanging onto her husband’s arm and exchanging loving glances with him 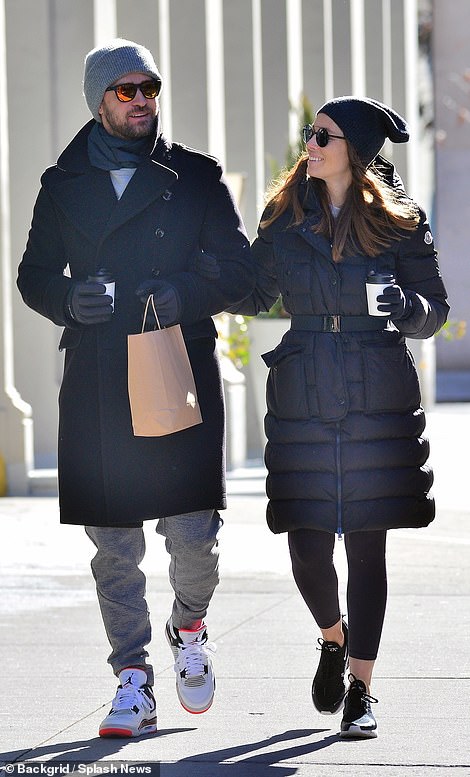 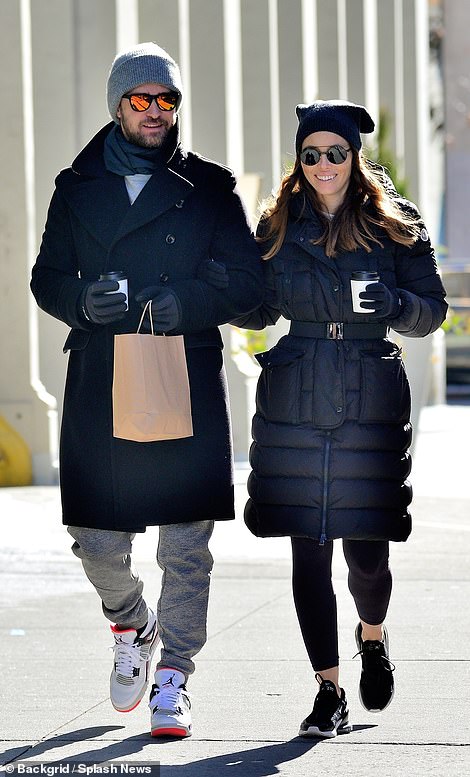 Matched: The two, who wed in 2012 and share a four-year-old son Silas, even mirrored each other’s style. Both donned knit hats and reflective sunglasses along with dark winter coats 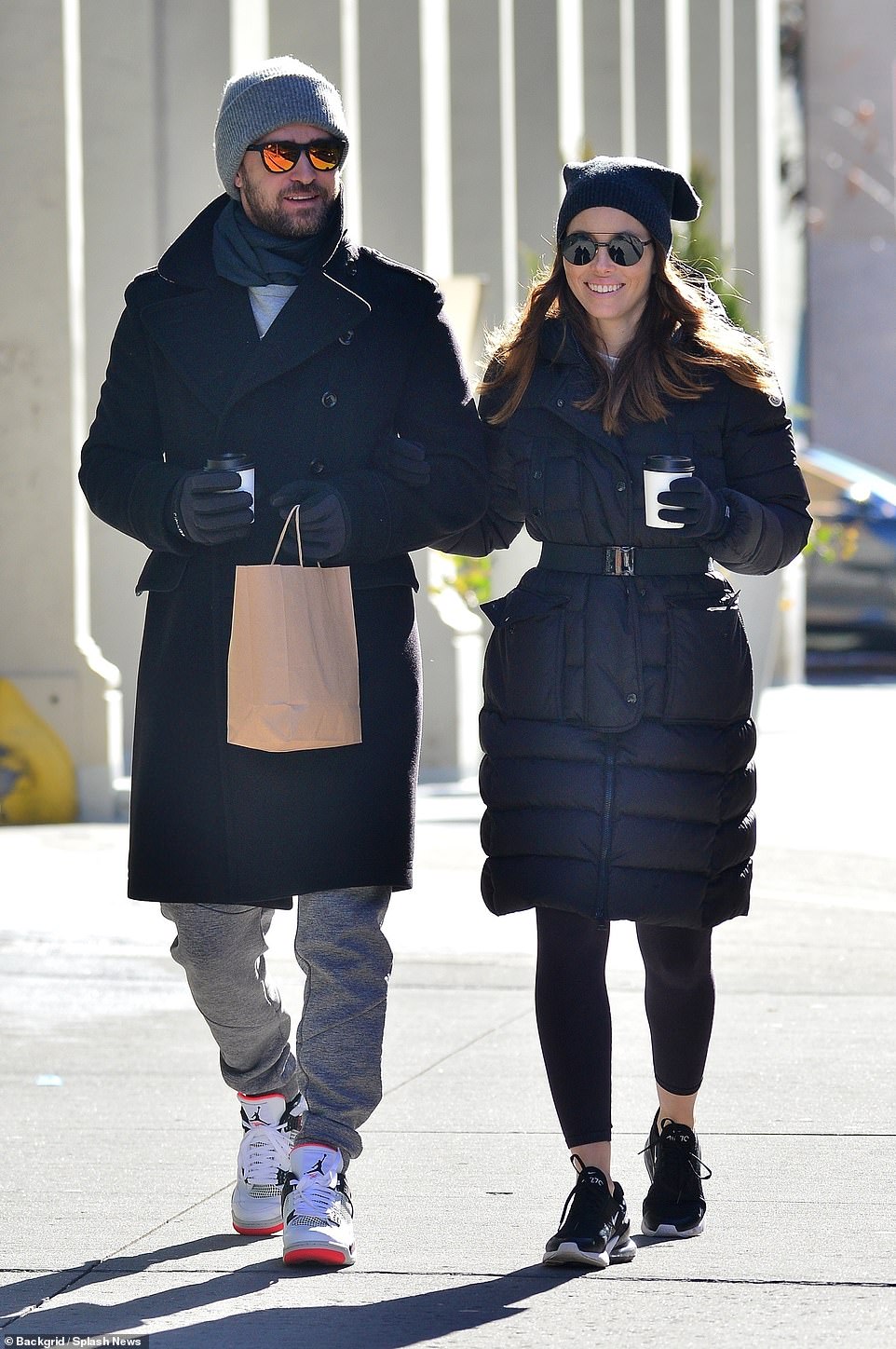 Sunday vibes: The couple had stopped off to grab some coffee to go to enjoy on their walk

Their joint outing came just a few days after Justin was seen solo in Manhattan’s Soho neighborhood, eating brunch by himself and cutting a somewhat lonely figure.

It had been reported last week that Jessica was ‘still upset’ with Justin for being caught holding hands with his Palmer co-star Alisha Wainwright during a late night out at a bar in New Orleans last November.

Among the issues the actress was said to be angry about was Justin not following through with earlier promises to be ‘more involved with the family,’ according to Us Weekly.

Sunday’s sighting isn’t the first time the pair have been spotted together since the scandal.

Ten days ago, they were seen having a quiet dinner together at a restaurant in Los Angeles.

But this is the first clear indication that the couple are moving on from the drama and want the world to know their marriage is solid. 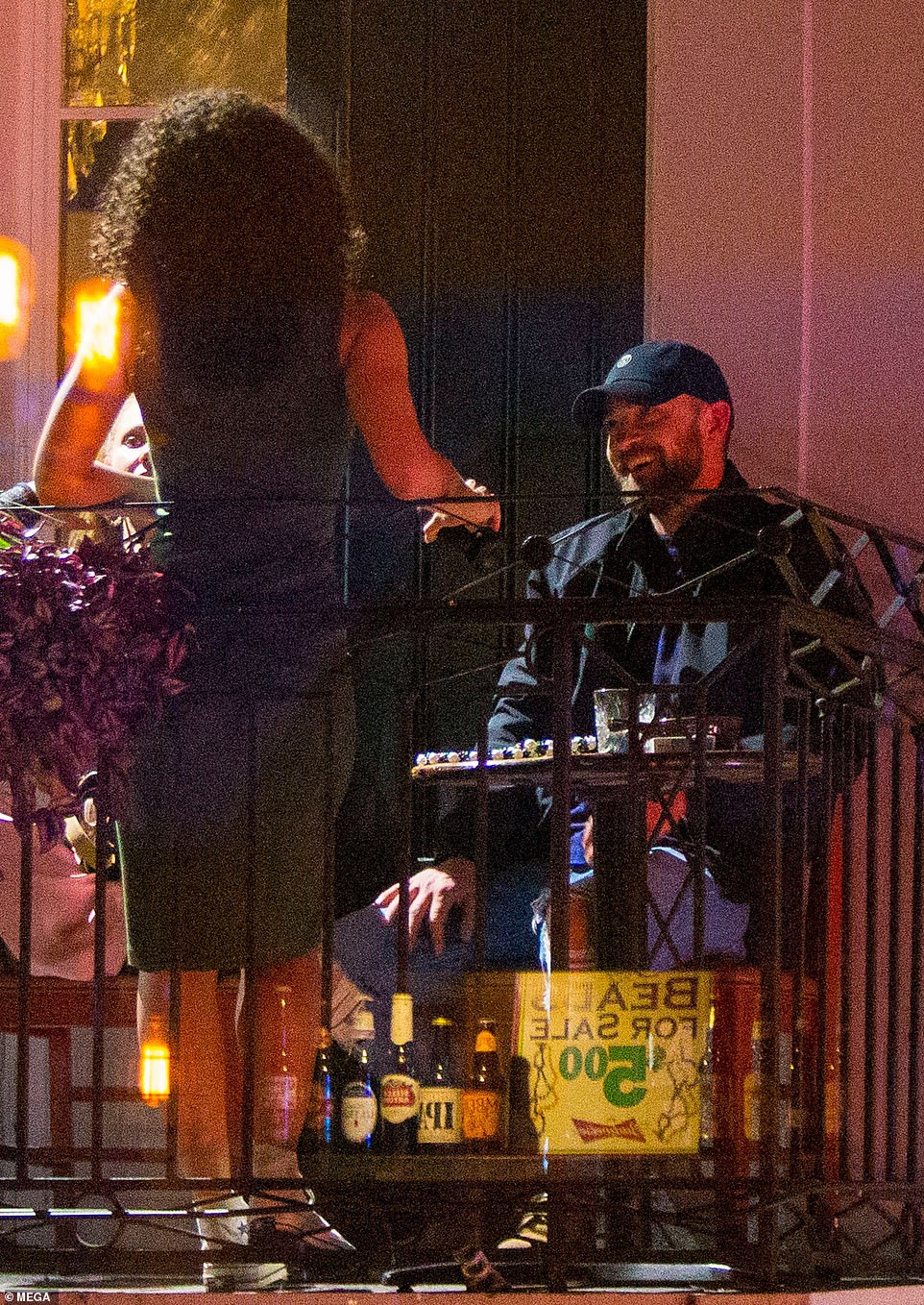 Scandal: In November, Justin was seen partying with actress Alisha Wainwright on the balcony of a New Orleans bar. The two were in the city to film the movie Palmer and appeared close 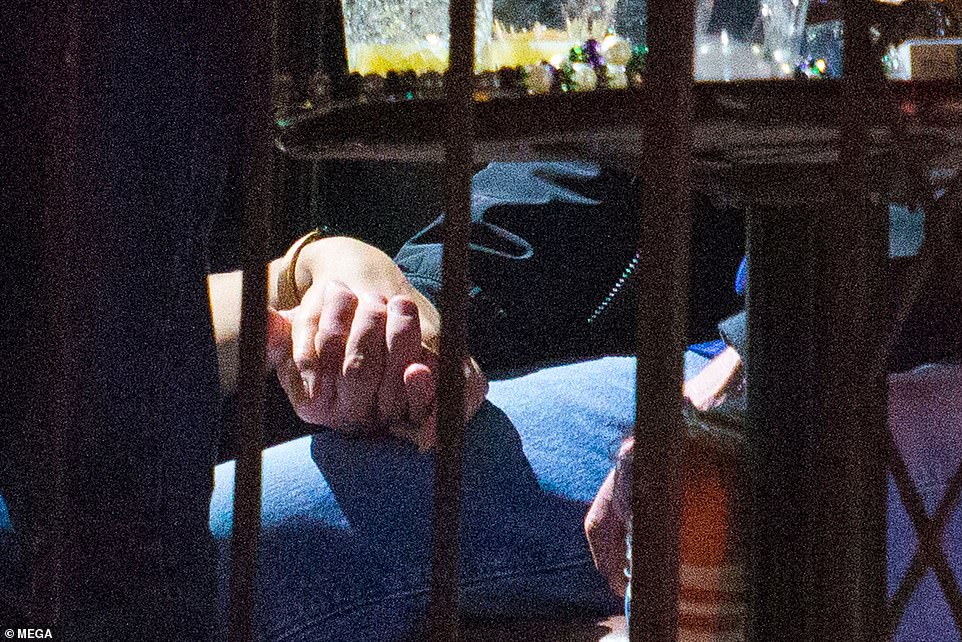 PDA: Justin and Alisha tightly clasped each other’s hand as they sat close and chatted away 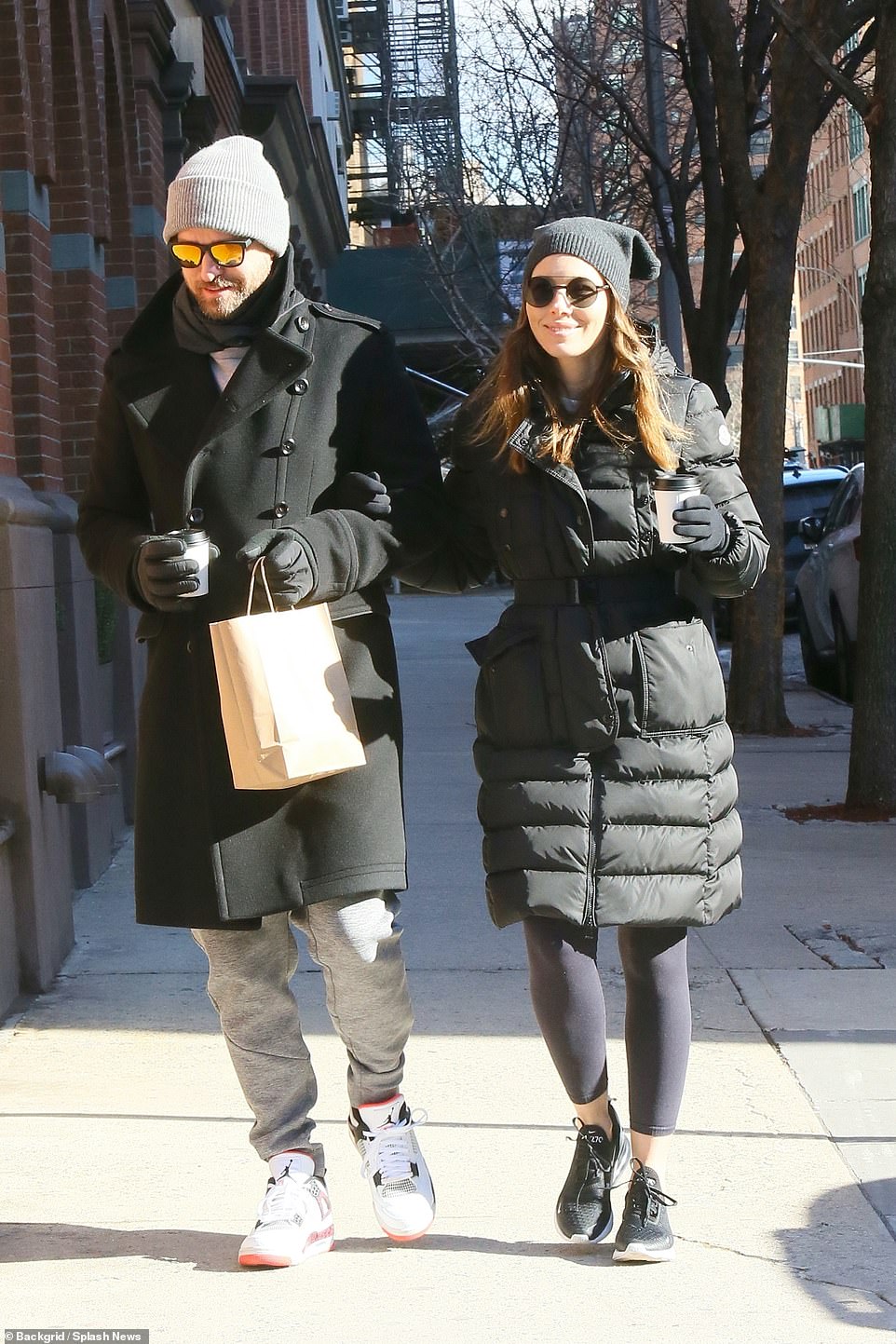 Sorry: On December 4, Justin publicly apologized to his wife, saying he had displayed ‘a strong lapse in judgement’ and blamed it on having too much to drink 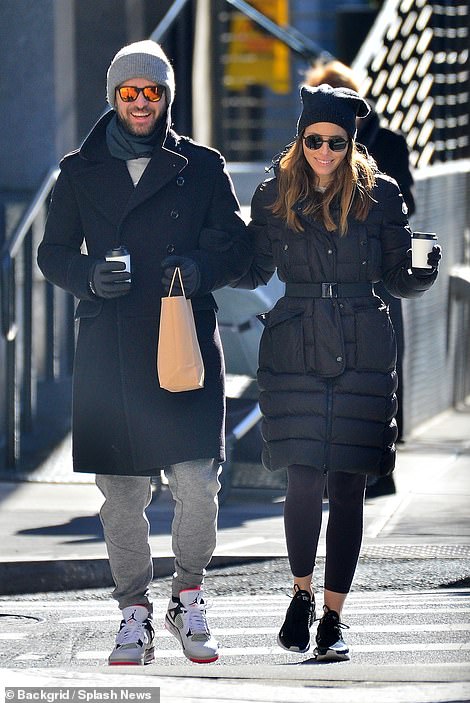 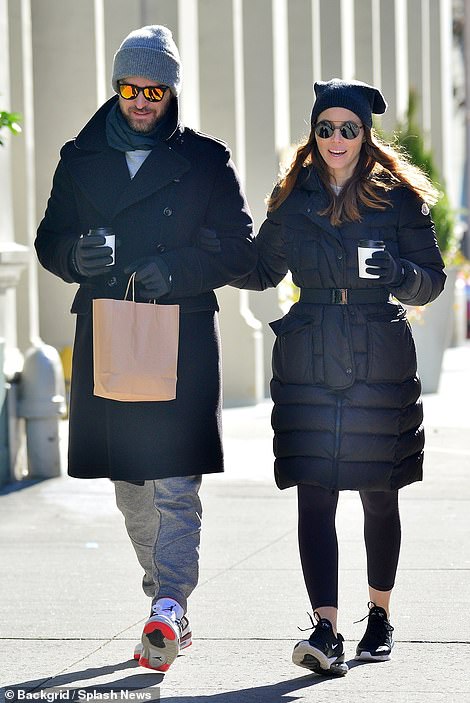 Gushed: In his apology, the Cry Me A River hitmaked called the former 7th Heaven actress ‘my amazing wife’. He added that he was focused on ‘being the best husband and father I can be’

On December 4, 10 days after the incident, the singer and actor had issued a statement via Instagram apologizing for his indiscretion.

‘A few weeks ago, I displayed a strong lapse in judgement – but let me be clear – nothing happened between me and my costar,’ Justin wrote.

He said he had ‘drank way too much that night and I regret my behavior. I should have known better.’

He then added: ‘I apologize to my amazing wife and family for putting them through such an embarrassing situation, and I am focused on being the best husband and father I can be.’ 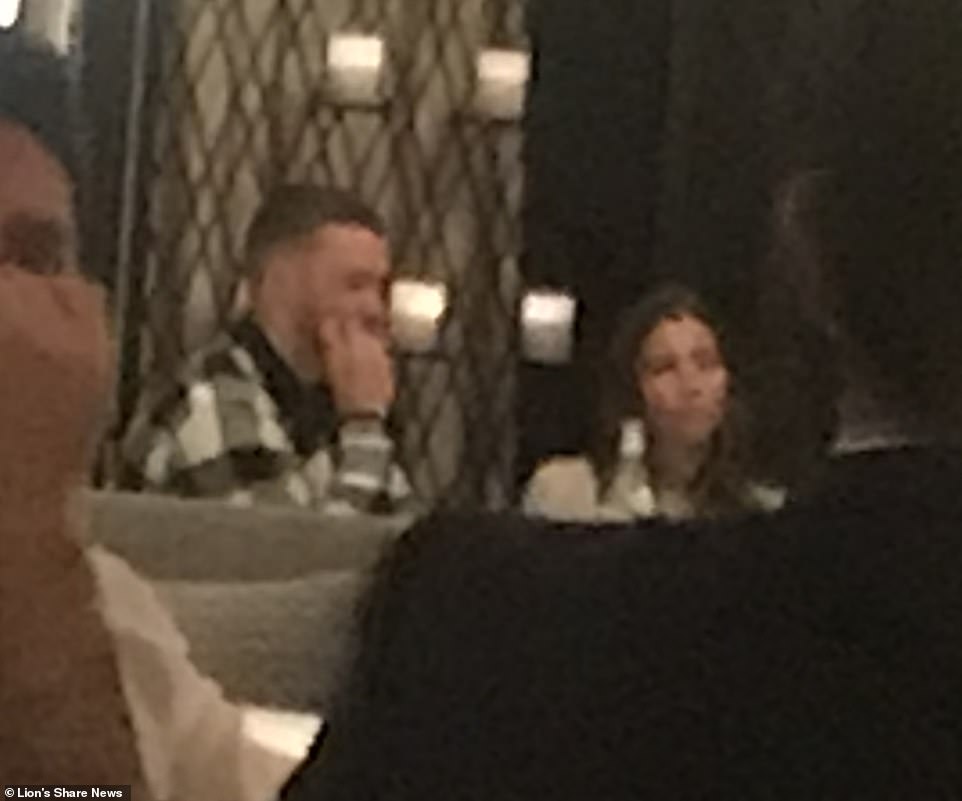 Mending fences: Last week, Justin and Jessica were seen having a quiet dinner together in Los Angeles, the first time they’d been photographed in public together since the incident 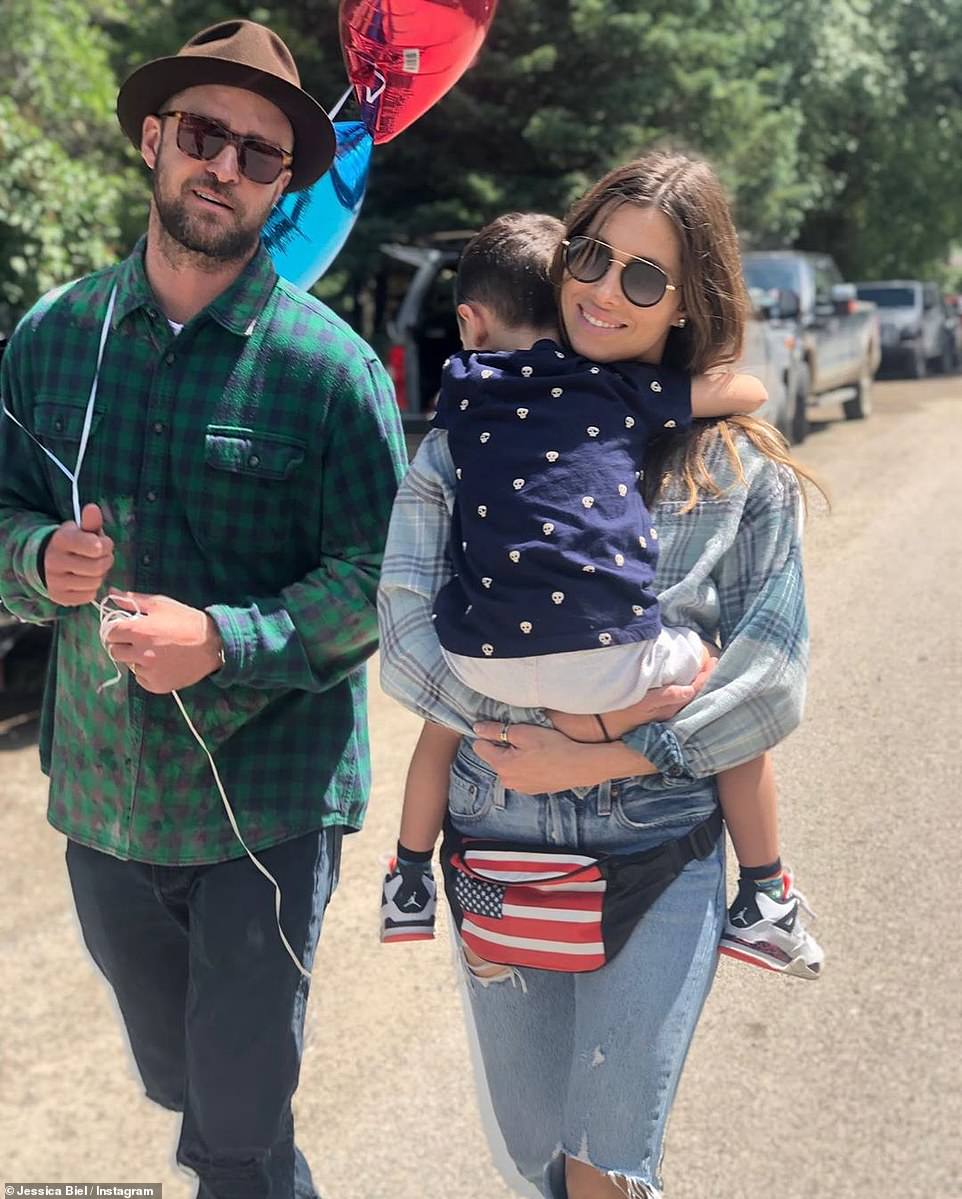 Apple of their eye: The couple are doting parents to their son Silas, four. They’re pictured in an Instagram photo shared last July 4 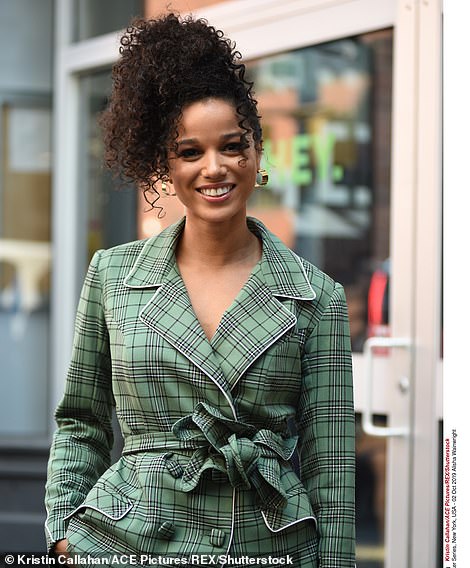 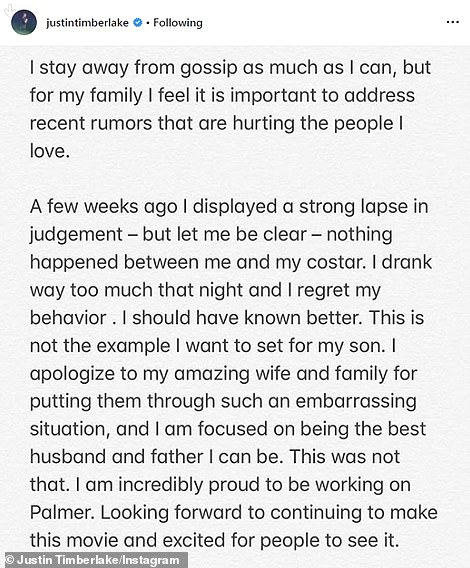 Caught in the middle: Wainwright, 30, pictured left in October, has not publicly commented on the drama. Justin’s apology was posted to his Instagram on December 4, right

Wainwright, who starred on Freeform’s Shadowhunters, was cast as Timberlake’s love interest in the movie Palmer, about a former college football star and convict who returns to his hometown after being released from prison.

The movie directed by Fisher Stevens was filmed entirely on location in New Orleans.

Late on Friday November 22, Timberlake was photographed with Wainwright and some other cast and crew at the The Absinthe House, a popular spot on the legendary Bourbon Street.

The pop star, who was not wearing his wedding ring, was seated at a table on a small balcony chatting to the actress as he drank.

‘At one stage he grabbed her hand and rested it on his knee. She then gently started stroking his leg,’ a witness said at the time. ‘Then he clutched her hand with both of his and was playing with her hands.’

In a video shot at the same time, he appeared at one point to put his arm around her.

The two then left the night spot together after midnight.

Photographed: Timberlake wasn’t wearing his wedding ring when he was photographed with Wainwright at the The Absinthe House on Bourbon Street. They spent time together on the bar balcony before leaving together after midnight

Who is Alisha Wainwright?

Justin Timberlake was seen getting cozy at a New Orleans bar with his Palmer co-star Alisha Wainwright this week.

Despite pictures of them holding hands – with Justin’s wedding ring missing – a source told DailyMail.com they were ‘out with a group of people from [the Palmer] production. There was nothing going on.’

So who is the leggy bombshell at the center of the rumor storm? 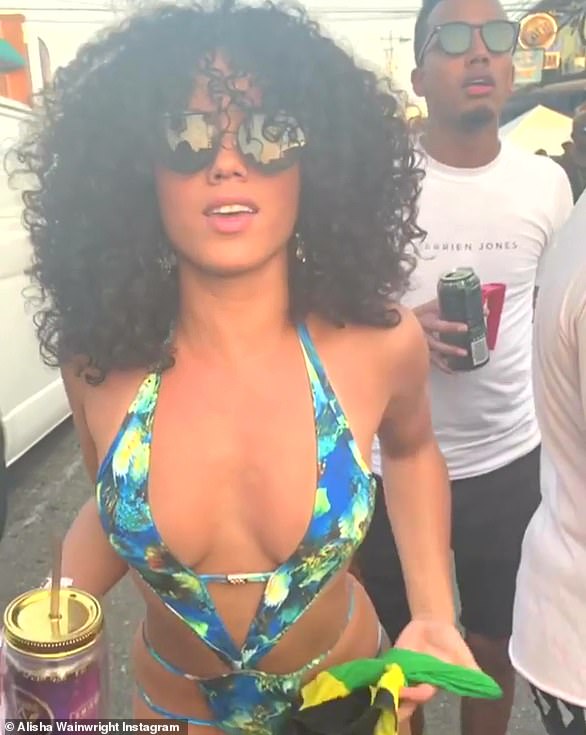 Origin story: Alisha Ena Wainwright was brought up by her single mother in Miami far from the glitter of Hollywood

Alisha Ena Wainwright was brought up by her single mother in Miami far from the glitter of Hollywood.

‘My mother is Jamaican and my father is Haitian, so growing up I spent a lot of my very early years going back and forth between both countries,’ she told Conde Nast Traveler.

Her teen years were scarred by money problems but her mother made sure to insulate Alisha from any distress.

‘My mom was incredibly good at sectioning off things that were stressful from my life. I never knew about the issues she had,’ Alisha said to Shondaland. 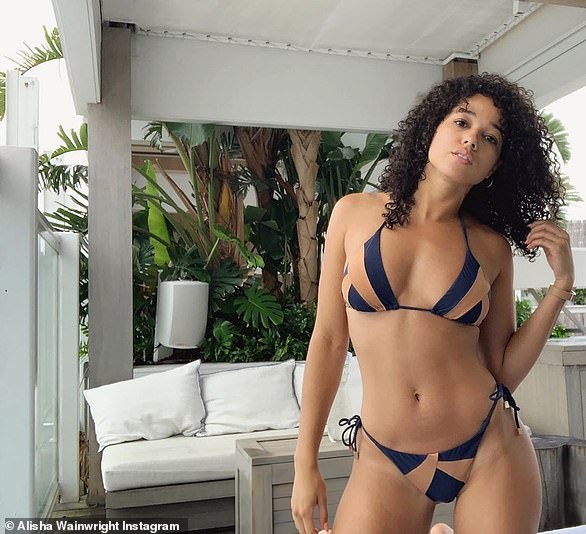 Well-traveled: ‘My mother is Jamaican and my father is Haitian, so growing up I spent a lot of my very early years going back and forth between both countries,’ she has said

‘She always felt fun and authoritative to me. I never knew what she was going through until later on when I realized there was an incredible financial struggle she went through during my adolescence.’

After majoring in botany at the University of Florida she conducted PhD research in Panama.

She told W: ‘I had a very weird anthropological-botanical focus, and I couldn’t find anyone to give me the money to study it.’ 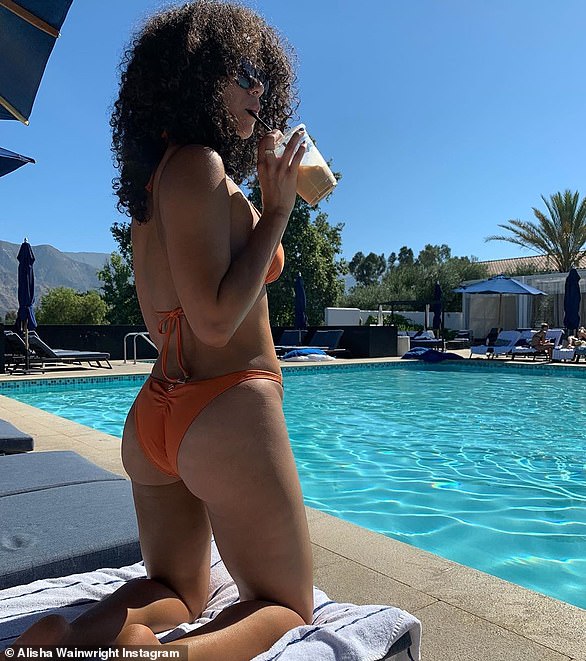 Rising star: She starred as werewolf Maia Roberts on Shadowhunters and now leads the cast of the Netflix sci-fi series Raising Dion

Her professional frustration drove her away from science and into acting, where she made her bones in 2012 on the YouTube comedy show Smosh.

Alisha became a star as werewolf Maia Roberts on the Freeform show Shadowhunters from 2017 till the end of the show this year.

Now she stars as the widowed mother of a child superhero on Raising Dion, a Netflix sci-fi show featuring Michael B. Jordan as her late husband.

‘I was raised by a single mother so I know that there’s a lot of drama in that life, and there is a lot to pull from,’ she told W. 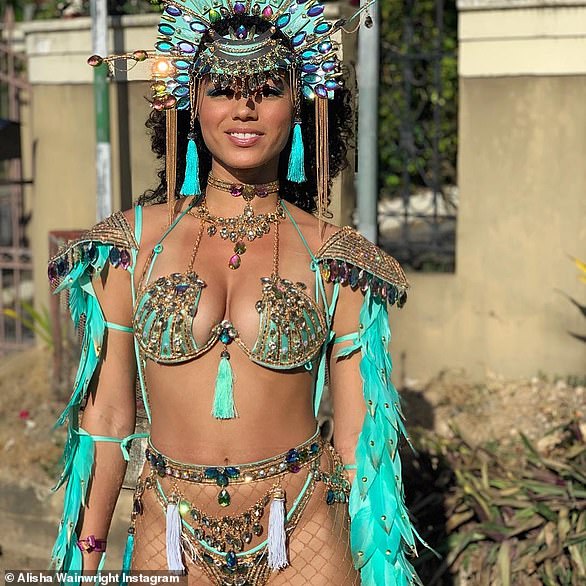 Globetrotter: Her travels are documented on her Instagram page as in this smoldering snapshot taken in Port of Spain, Trinidad and Tobago