The Archbishop of Canterbury yesterday urged all parties in the General Election to make ‘an absolute priority’ of reassuring minority groups.

The Most Rev Justin Welby said politicians must ‘avoid anything that increases the perception of fear’.

His intervention, which is backed by the Archbishop of York, the Most Reverend John Sentamu, followed accusations from Jewish groups of anti-Semitism among Jeremy Corbyn’s supporters.

The Church of England’s two most senior archbishops said that ‘several groups, especially in Jewish and Muslim communities, feel threatened and are in much anxiety.

No individual or community in our shared society should have reason to lack confidence in their belonging or security, so parties must make it an absolute priority to offer positive reassurance and avoid anything that increases the perception of fear.’

Mr Corbyn has been dogged by allegations of anti-Semitism throughout the Labour campaign while the Tories have faced the counter-charge of Islamophobia.

Boris Johnson has been challenged over his failure to follow through on a promise during the party’s leadership campaign to call an inquiry on the subject. 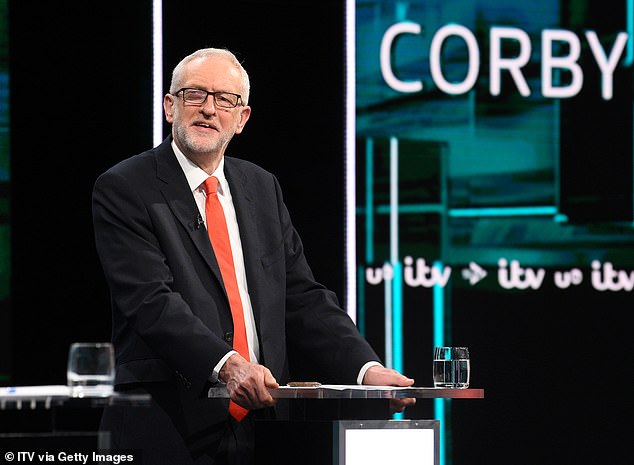 The Anglican archbishops said in an election letter to the Church that ‘we call on all standing for election to reject the language of prejudice and not to stoke stigma or hatred towards people on the grounds of their religion, culture, origin, identity or belief’.

CofE leaders have made a point of handing out advice to the faithful in recent elections.

In advance of the 2015 poll, Archbishop Welby and colleagues circulated a letter condemning ‘an ugly undercurrent of racism’ in debates about immigration and which called for continued EU membership, a rethink of the nuclear deterrent, and a new voting system.

◆ On last night’s first TV debate with Boris Johnson on ITV, Jeremy Corbyn refused nine times to say which side he would back in a second Brexit referendum.

◆ John McDonnell unveiled his war on business, including a tax on excessive pay and plans to grab firms’ shares.

◆ The Tories pledged new stop and search powers in a bid to crack down on knife crime.

◆ The Green Party unveiled its manifesto, including plans for higher fuel duty.

The CofE’s latest letter is potentially more embarrassing for Labour than the Tories. The Church is separately preparing a teaching document on Christian attitudes to Jews, which is expected to consider anti-Semitism and may be published during the campaign.

The archbishops also called for respect for politicians and different points of view, but for voters to call out those who lie. Their letter said: ‘Our political leaders face huge challenges, and these come with personal sacrifices.

‘We should be thankful for those who put themselves forward for public service. Each of us is called to honour the gift of truth – to speak it and to seek it. We all have a responsibility to speak accurately, to challenge falsehoods when we hear them.’

The letter continued: ‘People who hold different political views are not our enemies. Issues need to be debated respectfully, and without resorting to personal abuse.’

The archbishops also called for a just economic system, justice for the oppressed, and a commitment on climate change.