Paulo Dybala is stronger mentally than before and is ready to shine against Real Madrid in the Champions League, according to Juventus boss Massimiliano Allegri.

The Argentine is one of the most gifted players in Serie A but has had an up-and-down season. He began with a flourish, scoring two hat-tricks in Juve’s first four league games, but then suffered a loss of form and was dropped for two games in December.

A hamstring injury also kept him out for several matches but he is now back to his best and scored a stunning goal in the 3-1 win over AC Milan on Saturday.

‘Paulo will have a great match because he is fit, he is serene and, mentally, he has improved greatly,’ said Allegri as he gave the 24-year-old a vote of confidence ahead of the quarter-final first leg in Turin.

The tie is a rematch of last season’s final and Allegri said his team had learned from their 4-1 defeat in Cardiff last June.

‘Cardiff was a lesson in the overall growth of this team, especially in how to approach these matches in a serene manner,’ he said.

But he warned his players to be wary of a Real Madrid midfield he described as ‘lethal.’

‘They can be in your penalty area with two passes,’ he said. ‘We need some extraordinary marking and some excellent defensive play… The ideal scenario would be to score and not concede a goal.’ 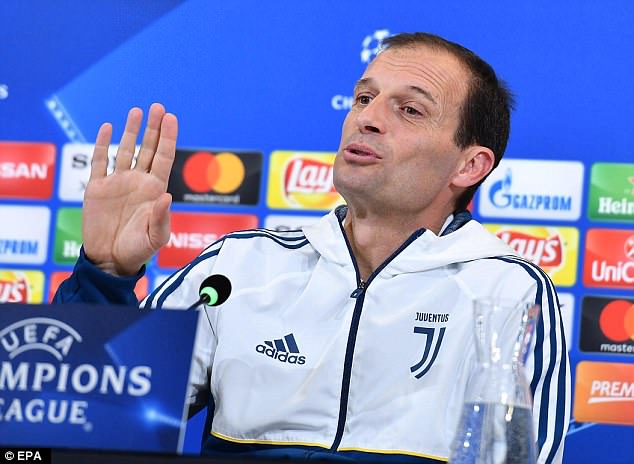 ‘This has nothing to do with happened 10 months ago,’ he told reporters after being asked to draw a parallel with the match.

‘What happened has happened, but now we have to think about this game and make sure we play well tomorrow.

‘We mustn’t think about that or other matches against Juventus because it doesn’t mean anything.’

Real have not had the best of seasons as they are third in La Liga and finished behind Tottenham Hotspur in the Champions League group stage, but showed they are still a force to be reckoned with by beating Paris St Germain in the last 16.