Juve’s Leonardo Bonucci pretends to be injured after Atletico opener

Leonardo Bonucci has been roundly mocked after pretending to be injured as Atletico Madrid scored their opener in the Champions League against Juventus – and inadvertently being responsible for the strike.

Bonucci tangled with Atletico defender Jose Gimenez as the ball was swung into the box during the second half of their clash at the Wanda Metropolitano on Wednesday.

As Gimenez applied light pressure to Bonucci, the Italian crumpled to the floor, holding his face – but clearly peeking through his fingers to watch of the referee blew his whistle. 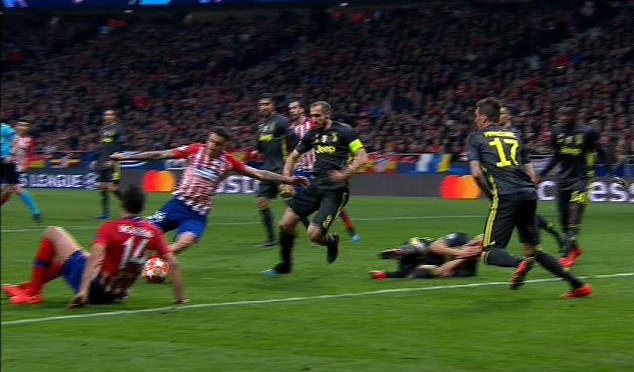 Bonucci fell to the floor under challenge from Jose Gimenez, and the ball bounced off him 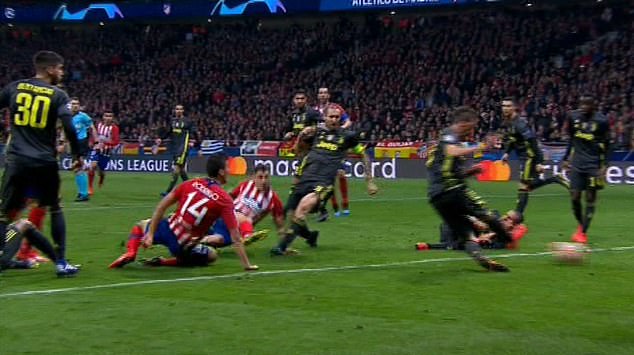 As he looked through his fingers, Gimenez scored, leaving Bonucci to pretend to be injured

The ball bobbled around the box taking a number of deflections, before it came off the side of Bonucci as he rolled around on the floor.

With the ball free, and the man who had been marking him indisposed, Gimenez was free to sweep the ball home and give Atletico the lead. They went on to win the first leg clash 2-0.

Bonucci, having watched as the comical scenes went on around him, added an extra layer of farce by rolling around with added vigour after the ball hit the net, in a futile attempt to draw a foul.

He was perhaps inspired by central defensive partner Giorgio Chiellini, who was judged to have been fouled by Alvaro Morata earlier in the half, resulting in the Chelsea loanee’s goal being chalked off via VAR.

However Bonucci’s play-acting was in vain, and made him a figure of fun on social media after the game.

Amused fans posted GIFs, videos and memes at his expense, while one compared him to Barcelona midfielder Sergio Busquets, renowned for his theatrics.

The upshot of the night’s result is that Juve face a very tough ask to reach the Champions League quarter finals after defeat in Madrid.