Devastated relatives of a little boy who was mauled to death by two dogs at a motel say the toddler was attacked while playing outside his family’s room after the animals escaped from a nearby pen.

Two-year-old Jyedon Pollard was set upon by the Rottweiler and cattle dog in front of his mum, Kesha, and sister at the Country Gardens Motor Inn at Cowra, in NSW’s central-west, just after 10am on Tuesday.

He suffered face and neck injuries and was rushed at Cowra Hospital in a critical condition. The boy was airlifted to Westmead Hospital in Sydney where he died on Tuesday afternoon.

Police on Wednesday said they were investigating claims Jyedon was playing with the dogs – who belonged to the motel’s owner Matt McIllhatton – in the enclosed area where they were kept when they lunged at the toddler without warning.

But Ms Pollard’s brothers Robert and Jake rubbished those claims, saying the animals suddenly burst out from the gate and attacked Jyedon in the ‘split second’ his mother went to fetch something from their room.

Jyedon Pollard, two, (pictured) was fatally mauled by two dogs at a hotel in Cowra, in NSW’s Central West, on Tuesday 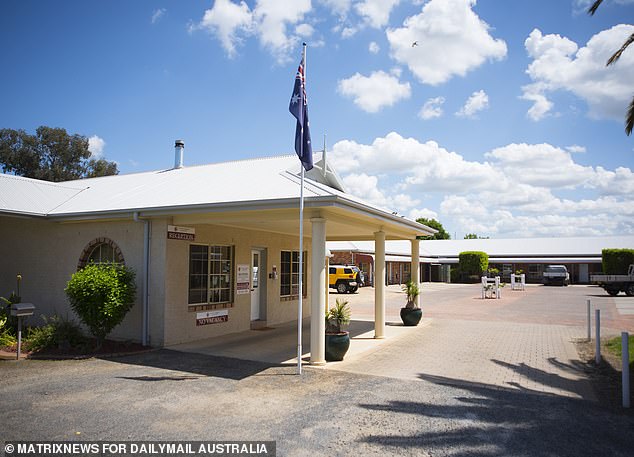 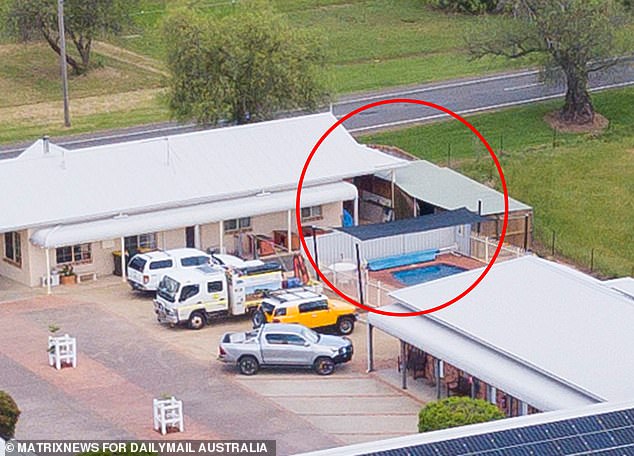 Close relatives said Ms Pollard and the kids were staying in a room right near the dogs. The area circled in red, behind the white gate, is the area where neighbours said the animals were kept

‘Jyedon was riding his scooter out the front of their room and Kesha went inside to get him a drink,’ Robert, who was at the hospital with Kesha on Tuesday, told Daily Mail Australia.

‘In that split second the dogs have either jumped over the gate or run out after it was left open and attacked Jyedon.’

The siblings said the family’s room was located beside the gate where the dogs were kept and the owner was letting them pat the animals the day before.

The dogs were put down on Tuesday night, the brothers said, after they were seized by council rangers following the attack.

However, relatives have been left wondering why vicious dogs were allowed to live at a business frequented by families with young children.

As heartbroken loved ones struggle to come to terms with the tragedy, Jake said his devastated sister ‘doesn’t know what to do’.

‘She just wants her son back,’ he said.

The details come after police on Wednesday revealed Mr McIllhatton bundled the dying toddler up in a blood-soaked blanket and rushed him to hospital with his distraught mother. 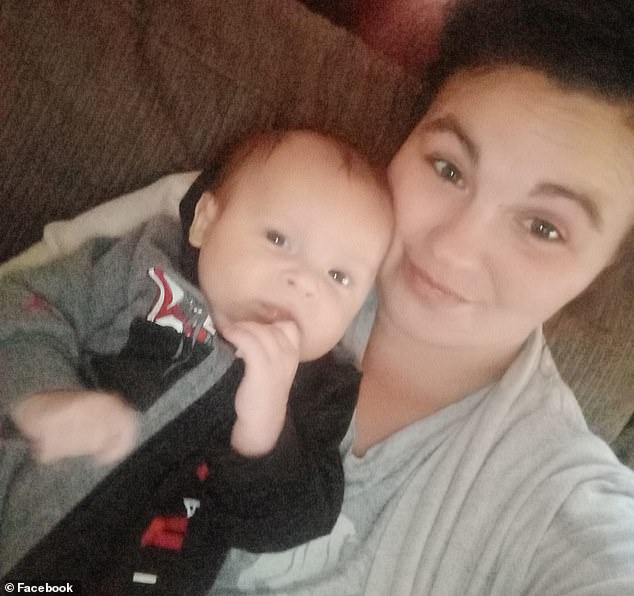 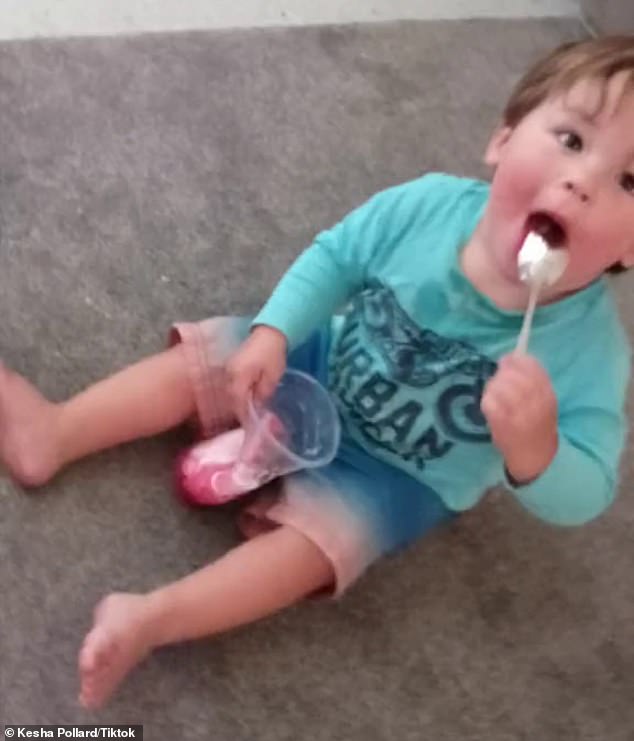 In the months before the tragedy, Ms Pollard described her son in numerous posts online as a ‘happy boy’

One local told Nine News: ‘I saw the kids screaming.

‘I looked out the window across the road and I saw some guy carrying a little kid who was absolutely screaming and people were panicked.’

Mr McIllhatton’s dogs were frequently seen around the motel but ‘appeared friendly’, according to neighbours.

On Wednesday, Mr McIllhatton was trying to help police and council investigators piece together the details of the tragedy but admitted that it was overwhelming.

‘Sorry… It’s all too much,’ he told Daily Mail Australia.

Police have sealed off areas of the motel as a crime scene as they investigate the tragedy.

But they say there were no witnesses during the initial stages of the attack as it happened at the back of the motel.

‘The two dogs were secured in a yard and what led to the attack will be investigated,’ Chifley police superintendent Bob Noble said.

‘It is an extremely unfortunate set of circumstances that led to this tragedy and it was a super-human effort to try to save his life.

‘It would be a horrific situation to be confronted by but he acted very bravely and very concisely.

‘Everyone is devastated when a child so young dies in such terrible fashion. It’s upsetting to a lot of people.’ 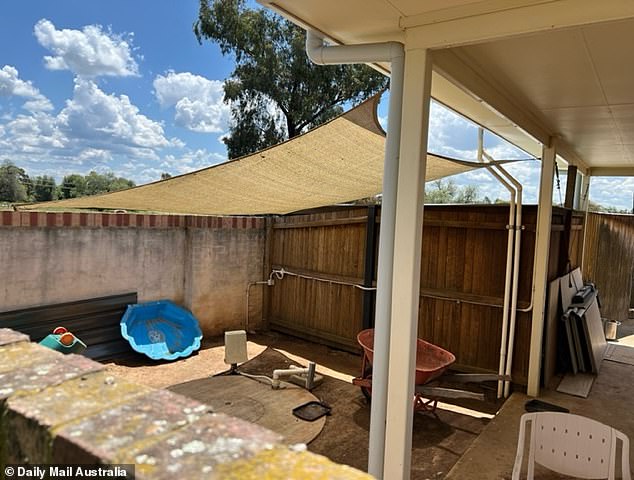 Police are now probing claims that Jyedon was playing with them in an enclosed area when they suddenly attacked without warning (pictured, an area at the rear of the motel with dog beds and food bowls) 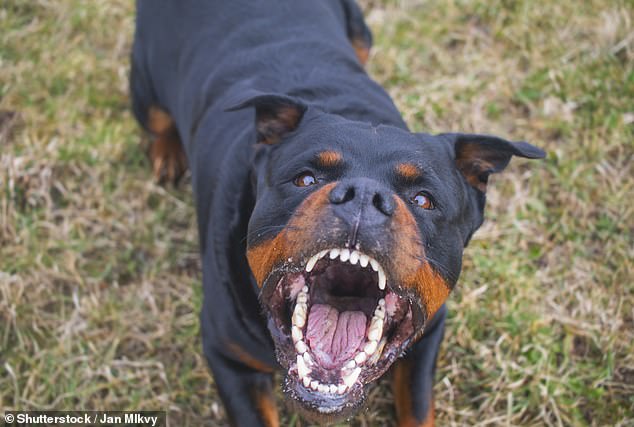 On Wednesday morning, locals left a teddy bear wearing a Santa hat and two bouquets of flowers at the base of a tree outside the motel on Cowra’s Grenfell Rd.

Ms Pollard had been living at the motel temporarily with Jyedon and her two daughters, Aaliyah, 9, and Tahaleaha, 5, as they waited to move into a new home.

The family had recently been living in a housing commission property in Cowra which was hit by devastating floods last week.

Ms Pollard mourned her aunt’s death in May 2021 in a touching post on Facebook: ‘My life will never be the same without all the coffees we had I will cherish forever.

‘You were my rock. I promise aunty Neen I will be forever grateful for everything you taught me.

‘Fly high my princess you may be gone but will always be here with me no matter what. I miss you so much.’ 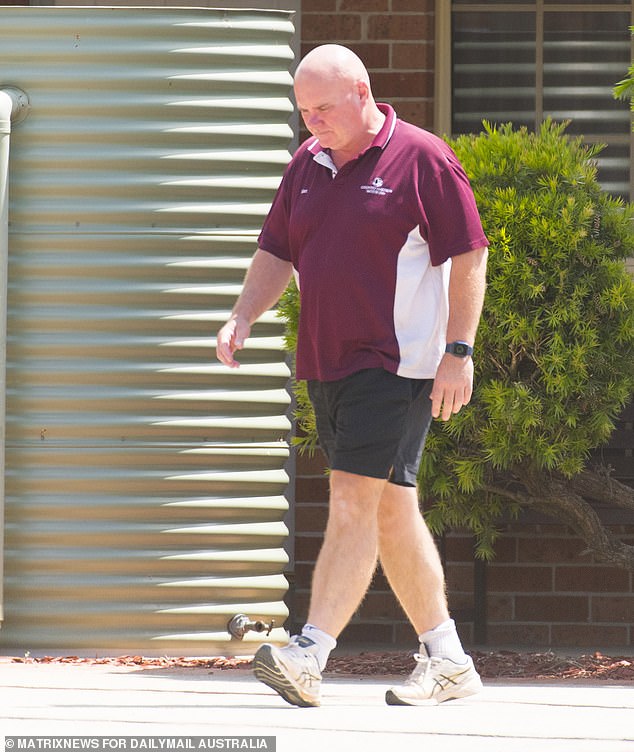 Devastated motel owner Mat McIllhatton bundled up the dying toddler in a blood-soaked blanket and rushed him to hospital with the boy’s distraught mother, police revealed 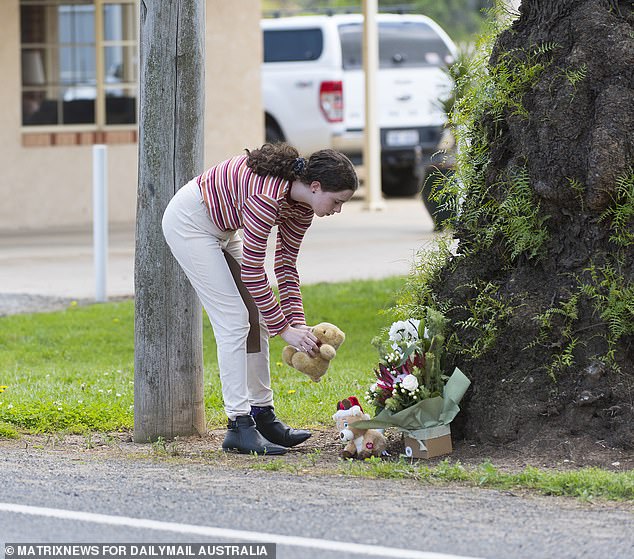 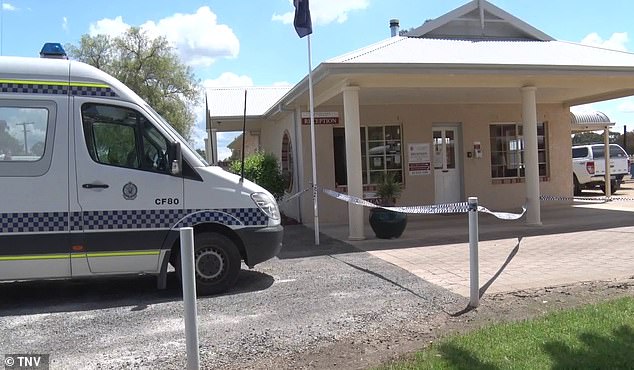 Relative Amanda Jayne Scott paid tribute to Jyedon on Facebook and revealed she is still grieving the loss of her own young son – but warned of the dangers of unpredictable dogs.

‘This little boy was my son-in-law’s cousin.

‘RIP little man. My little boy is in heaven too and I’m sure he will be there to greet you with his Tonka truck.’

She added on Facebook: ‘It’s a darker day in Cowra today. Such heartbreaking news when we lose one of Cowra’s babies.

‘I’m beyond angry that people continue to own these powerful dog breeds and allow them near children.’

Neighbours said the dogs lived on the property and appeared docile.

‘They were always around. I can’t believe this has happened. 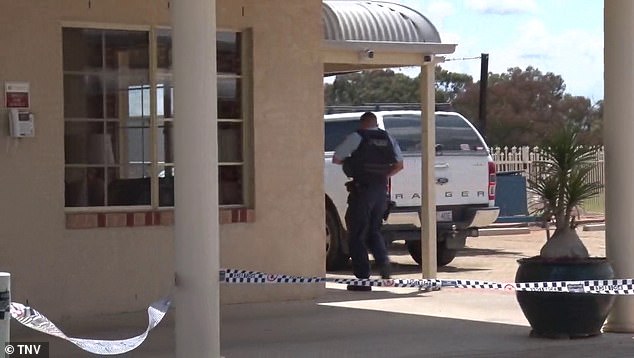