K2 sends ANOTHER wave of ‘zombies’ staggering through Brooklyn

Another wave of K2 ‘zombies’ has descended on Brooklyn, as the area fights another epidemic of overdoses tied to a bad batch of the illicit drug.

Paramedics peeled three overdose victims from the sidewalk at around 12.30pm on Thursday at the intersection of Ralph Avenue and Eastern Parkway in the Brooklyn neighborhood of Crown Heights.

Cops say a batch of bad K2 packed in baggies showing Scooby-Doo and a scantily clad woman labeled ‘Fairly Legal’ has sent nearly 100 to the hospital in recent days.

Last Saturday, 25 were hospitalized amid apocalyptic scenes in Bedford-Stuyvesant, about two miles north of the latest incident. 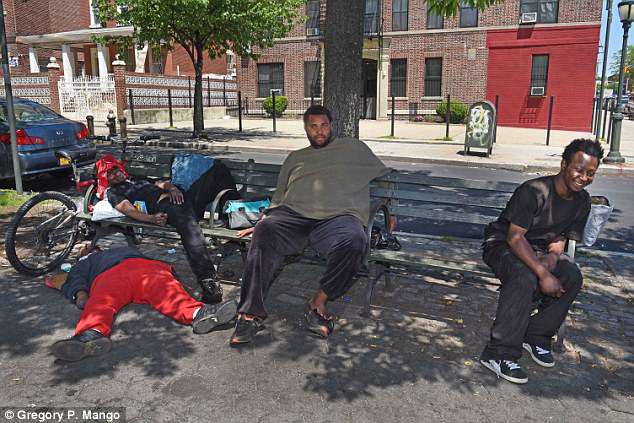 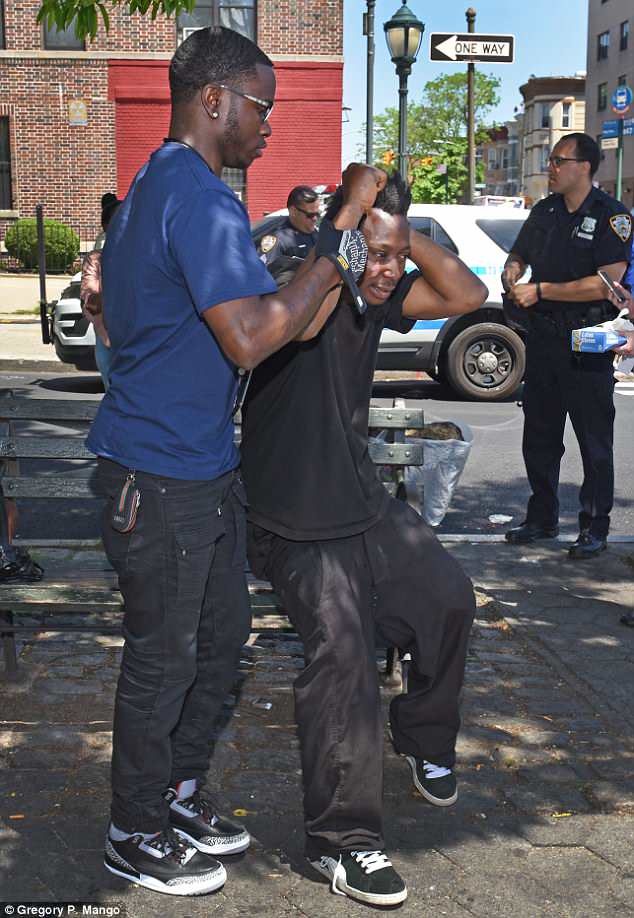 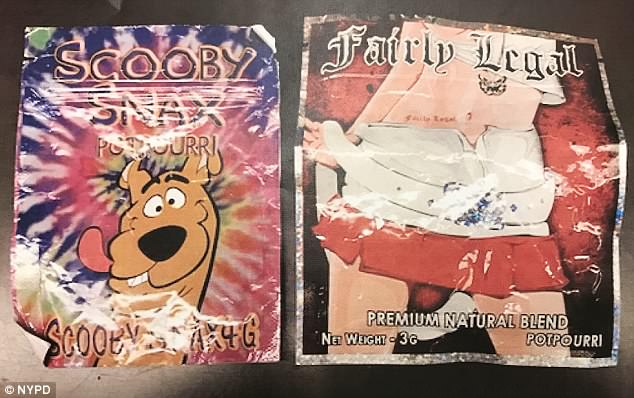 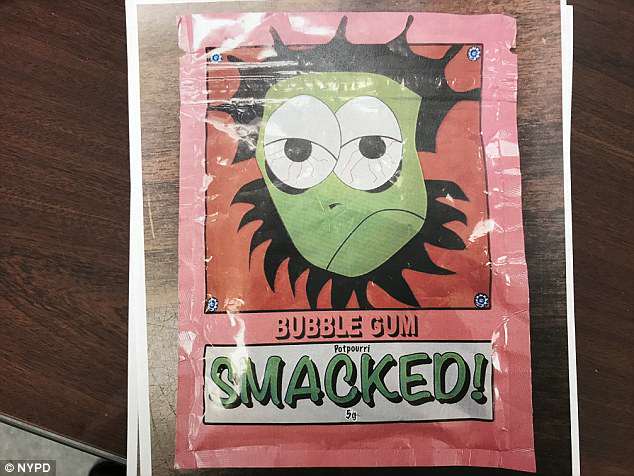 ‘K2 is a dangerous, deadly drug, but this strain is especially threatening,’ said NYPD Chief of Department Terence Monahan earlier this week.

Police say they are working to determine exactly what chemicals are sending dozens to the hospital.

K2, also called ‘spice’ or synthetic cannabinoids, refers to a wide range of complex chemicals that bind to the same receptors as marijuana – but with unpredictable and sometimes serious side affects.

These dangerous chemicals are often manufactured in China, and then sprayed on plant material and sold in baggies for as little as $1, according to police.

Police say they have made 36 arrests in at least five locations in connection with the recent spate of overdoses.

Photos from the most recent incident on Thursday in Crown Heights show one man sprawled on the sidewalk in a daze, covered in vomit. 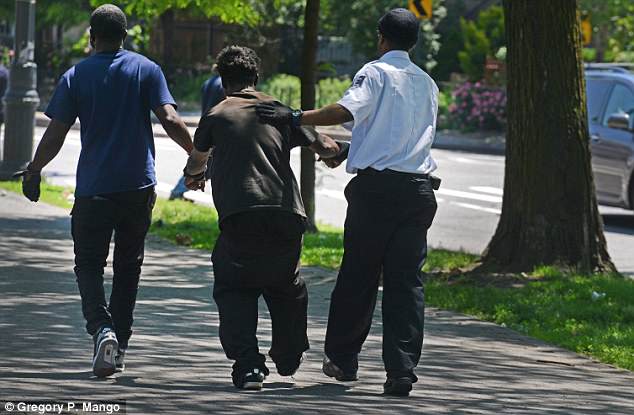 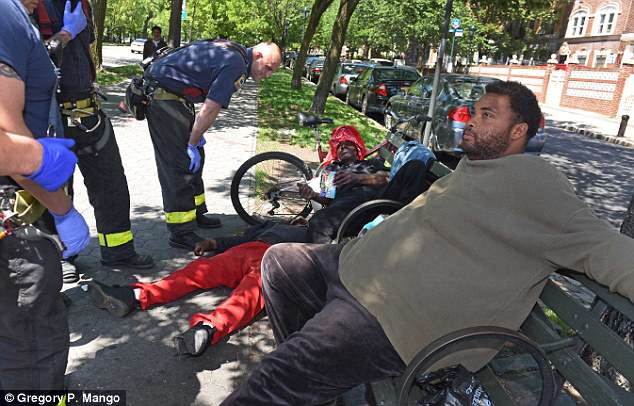 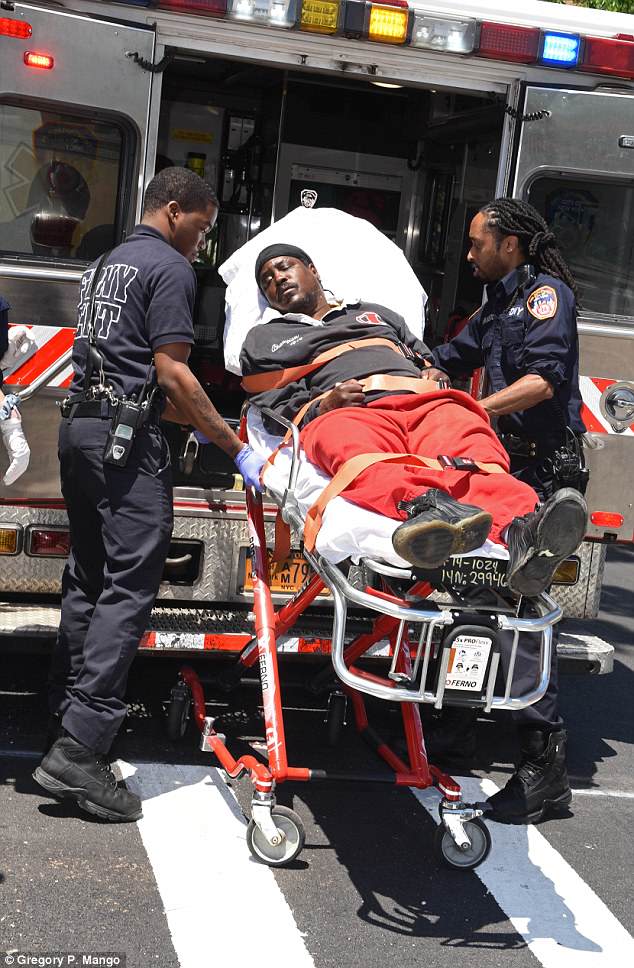 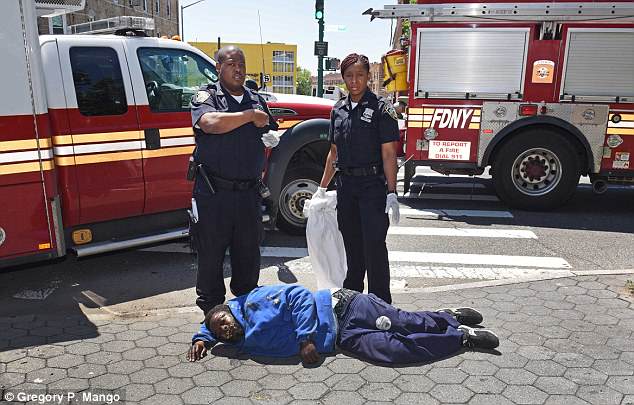 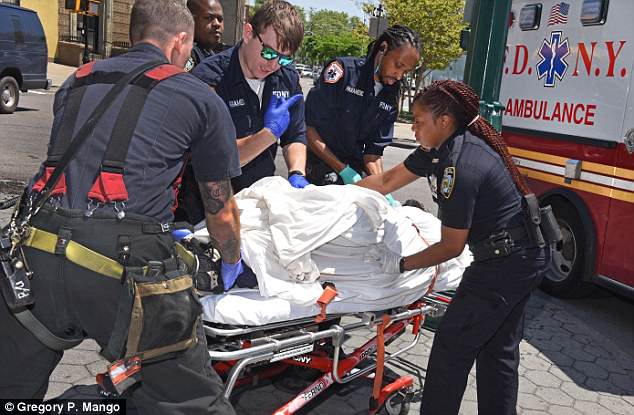 Another man appears unconscious as paramedics load him into a waiting ambulance.

A third man appears crazed and resistant as first responders attempt to lead him to assistance.

Because the chemicals vary from packet to packet, the effects of K2 are unpredictable and can change from use to use, according to the New York City Health Department.

The products can also cause a rapid increase in heart, paranoia, confusion, vomiting and hallucinations.

More than 6,000 people have been sent to the emergency room in New York because of K2 since 2015 and there have been two confirmed deaths caused by the drug.

New York Mayor Bill de Blasio signed a bill in October that made it illegal to sell or produce K2, making it a crime punishable by up to a year in jail and fines of more than $100,000.

In May 2016, he announced that there had been an 85 percent decline in K2-related emergency visits in the last 10 months. 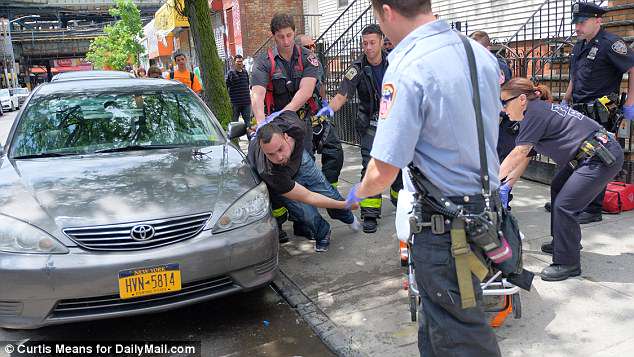 A man is seen stumbling last weekend in Bedford-Stuyvesant, where 25 were hospitalized 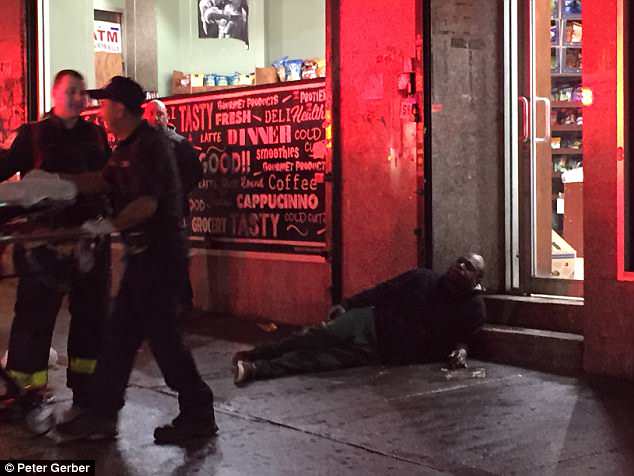 ‘Right now we are talking about step up enforcements in the local area to make sure that this doesn’t happen again,’ Cornegy told reporters.

Shops that are caught selling the drug lose their license to sell cigarettes. But Cornegy said many area shops have found ways to get around the law.

‘Some of the local shop owners are now using what’s called runners. So, not selling it absolutely out of the store, but having people who are working outside of the store who are loosely associated with the stores doing their business for them,’ the councilman told New York 1.

‘So we have to escalate our efforts in an effort to stop this scourge in our community.’