With his client Colin Kaepernick suing the NFL for collusion, celebrity attorney Mark Geragos predicted that the former San Francisco 49ers quarterback would be signed within the ‘next 10 days.’

‘I think within the next 10 days somebody will sign him,’ Garagos told the Adam Carolla podcast. ‘I think somebody’s gonna sign him. I think the NFL has to come to their senses, and realize every day that goes by just proves the collusion case even more.’

Kaepernick has been a free agent since March, following a 2016 NFL season in which he created significant controversy by protesting inequality and police brutality against minorities by kneeling and sitting during the national anthem.

The 29-year-old is arguing that the 32 NFL owners have colluded to keep him out of the NFL as punishment for igniting protests around the league.

‘[The owners] have colluded to deprive Mr. Kaepernick of employment rights in retaliation for Mr. Kaepernick’s leadership and advocacy for equality and social justice and his bringing awareness to peculiar institutions still undermining racial equality in the United States,’ reads the filing, which demands an arbitration hearing. 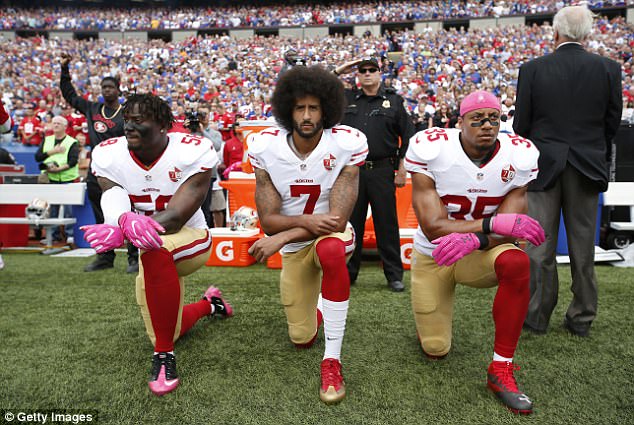 Eli Harold  (No. 58) Colin Kaepernick (No. 7) and Eric Reid (No. 35) of the San Francisco 49ers kneel in protest during the anthem prior to a 2016 game against the Buffalo Bills

According to Geragos, the lawsuit can be terminated very easily.

‘There are a least seven teams that I can pick off that could probably sign Kaepernick to a two-year deal,’ Geragos said. ‘Then they can just step on my neck and make the collusion case go away which would be the simplest thing in the world if they wanted to solve it.’

Both New England Patriots quarterback Tom Brady and Green Bay Packers quarterback Aaron Rodgers have said they believe Kaepernick deserves to be on an NFL roster, with Rodgers going so far as to tell ESPN he thinks the Wisconsin native is being blackballed.

‘I think he should be on a roster right now,’ Rodgers said. ‘I think because of his protests, he’s not.’ 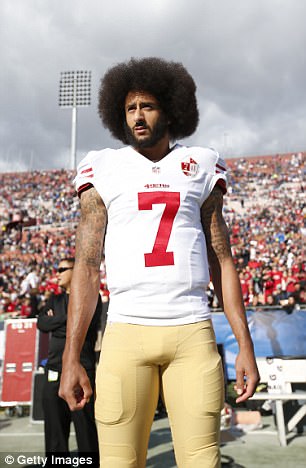 The demonstrations have since engulfed the NFL in controversy. Many other players have followed by sitting, kneeling, or raising a fist during the national anthem, but the issue has become even more contentious since President Donald Trump weighed in during a speech in late September.

Not only did Trump accuse players of disrespecting the country, calling them ‘sons of b******,’ but he also demanded NFL owners punish those who refuse to stand for the anthem.

Whether or not the protests are to blame, the fact is that NFL audiences have been shrinking. The league’s television viewership dropped 8.2 percent from the first six weeks of last season and 18.7 percent from 2015, according to Nielsen data.

A recent poll published by the Washington Examiner seemingly proved that football is no longer America’s favorite sport.

Favorable ratings for the NFL have dropped from 57 percent to 44 percent from the end of August to the end of September, according to the Winston Group survey.

Meanwhile, the unfavorable rating for the league is the highest among any big sport – 40 percent.

In August and September, baseball had the highest favorable rating than any other sport at 63 and 65 percent.

While the sport was already seeing lower TV ratings, the accompaniment of the National Anthem protest with outlandish criticism from President Donald Trump has caused core fans, men aged 34-54, to turn their attention elsewhere.

Men entirely have seen a decrease in favorable ratings from 68 percent to 45 percent.