Kai Havertz did not receive the reaction he would have hoped for after issuing a call for togetherness at Chelsea, which left fans pointing the finger at the misfiring German forward in response.

Havertz has been seemingly bereft of form as Graham Potter’s side struggle for positive results, and admitted his colleagues in the dressing room were as ‘frustrated’ as the fans with the torrid run of results.

Chelsea were beaten 2-1 as Fulham won a first west London derby in the league for 17 years, in which new signing Joao Felix was sent off for a shocking challenge, with Potter’s survival prospects at the club taking another hit.

And after the shock loss against the Blues’ near neighbours, Havertz sought to bring a semblance of harmony to the club by posting his call for ‘togetherness’ on Instagram. 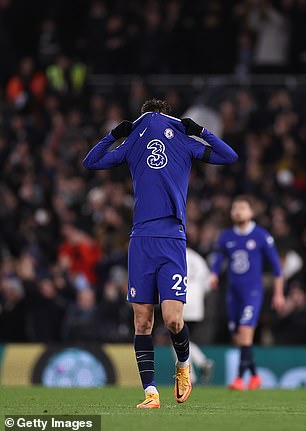 ‘Tough times call for togetherness,’ read the German, who put in a particularly poor performance as Chelsea were beat 4-0 by Manchester City in the FA Cup third round.

‘We’re as frustrated as all the fans with the way things are going at the moment. We’ll continue to work on ourselves and improve with everyday! COYB,’ followed by a blue heart.

But far from help to mend the rift at Stamford Bridge, Havertz’s post was answered with warnings from fans that he should look for another club if he could not put in improved performances in the near future.

One fan wrote: ‘Instead of uploading Instagram posts and making apologising statements, improve your game or leave the club.’

Another said: ‘Loool this guy performs once every ten games and come to Insta to apologize, bro how did you even turn a footballer I’m baffled. 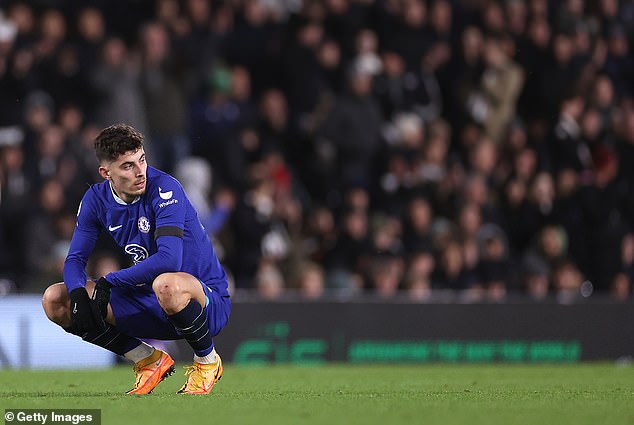 ‘I’m a better football player than you, the only thing we want from you is leave us, please brother leave us.’

And a third added: ‘You should have made that pass to either Mount or Felix. You need to step up your game or leave this club.’

As a result of Thursday night’s defeat, Chelsea have now won only once in their last ten games, losing seven and drawing two.