Donald Trump capitalized on recent White House gaffes during his Michigan rally where he slammed Kamala Harris for ‘one of the worst’ mistakes yet after she mixed up North and South Korea.

In the lengthy remarks, the former president also thanked Supreme Court Justice Clarence Thomas’ wife Ginni Thomas for standing true to her belief that the 2020 presidential election was stolen after voluntarily speaking with the January 6 select committee.

‘She didn’t wilt under pressure like so many others,’ Trump said of Thomas. ‘She said what she thought, she said what she believed. Too many Republicans are weak and they are afraid.’

He said those who don’t back down to the 2020 election fraud claims show ‘courage and strength.’

Vice President Harris said last week that the U.S. has a strong alliance with the communist nation during remarks at the Demilitarized Zone (DMZ) between North and South Korea during a four-day Asia trip.

Trump joked that she is a ‘North Korea sympathizer’, to which the Michigan crowd roared with laughter.

Donald Trump tore into Vice President Kamala Harris for her gaffe last week in a speech at the Korean Demilitarized Zone (DMZ) claiming that the U.S. has a ‘strong alliance’ with North Korea 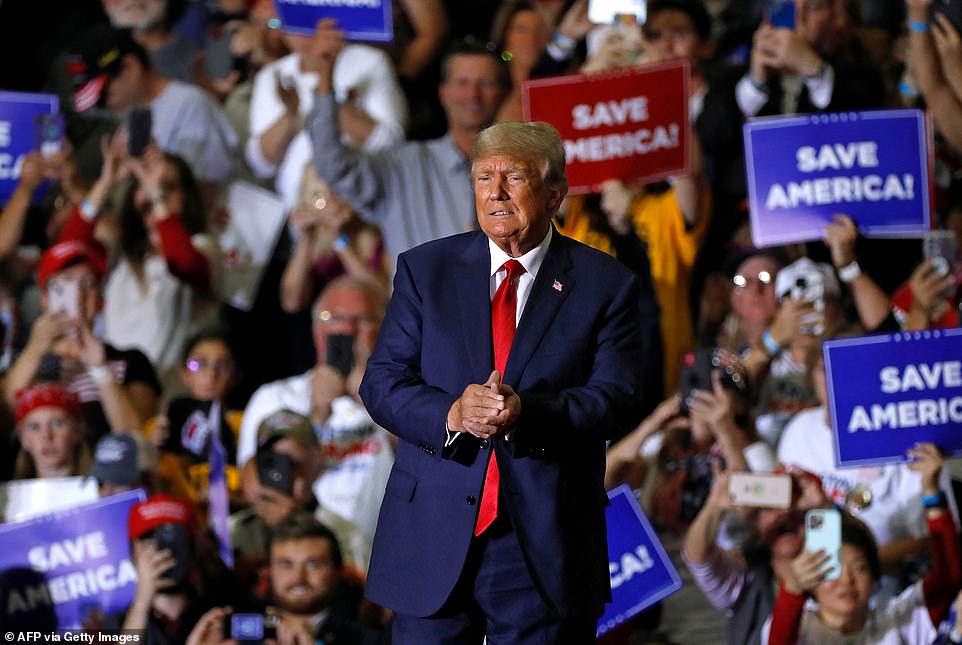 The former president joked that Harris is a ‘North Korea sympathizer’, to which the crowd roared with laughter

‘The United States shares a very important relationship, which is an alliance with the Republic of North Korea,’ Harris said Thursday, intending to refer to the Republic of Korea, which is the official name of South Korea.

‘It is an alliance that is strong and enduring,’ she continued, not appearing to recognize her mistake.

A later transcript of the remarks had a line through the word ‘North’, a way for the White House stenographer’s office to fact check.

‘I think that was one of the worst mistakes of all,’ Trump said of the gaffe. ‘Can you imagine? They’re standing on the border, North Korea’s over there shooting off missiles as she’s speaking.’

‘They’re shooting off missiles and she’s saying about ‘North Korea’s out ally and our friend,’ Trump added. ‘And when I heard it, I said, ‘Oh this is sort of just a – she didn’t mean that.’

North Korea conducted a series of missile test launches last week during Harris’ swing through Asia, including one in the moments she was speaking at the DMZ. 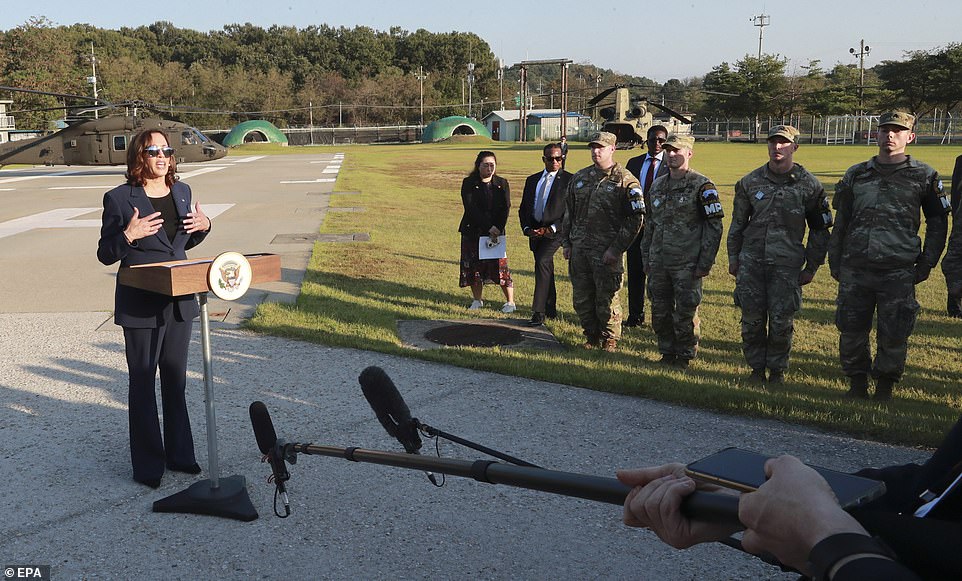 During remarks at the conclusion of her visit to the DMZ, Harris touted the alliance the U.S. has with ‘the Republican North Korea’ – an embarrassing gaffe on the heels of President Joe Biden asking the crowd to identify a decease congresswoman the day prior

The former president said Harris’ staff should have sent someone up right away to correct her, even when insisted he would get ‘angry’ if someone did that during his remarks.

‘In that one,’ however, ‘I would be very happy to receive their advice, because that’s one of the worst I’ve ever seen,’ Trump said.

Before the former president took the stage, a video played showing Biden’s verbal gaffes and physical missteps, like falling up the stairs.

The video ended with a question: ‘How can you lead when you can’t even speak?’ 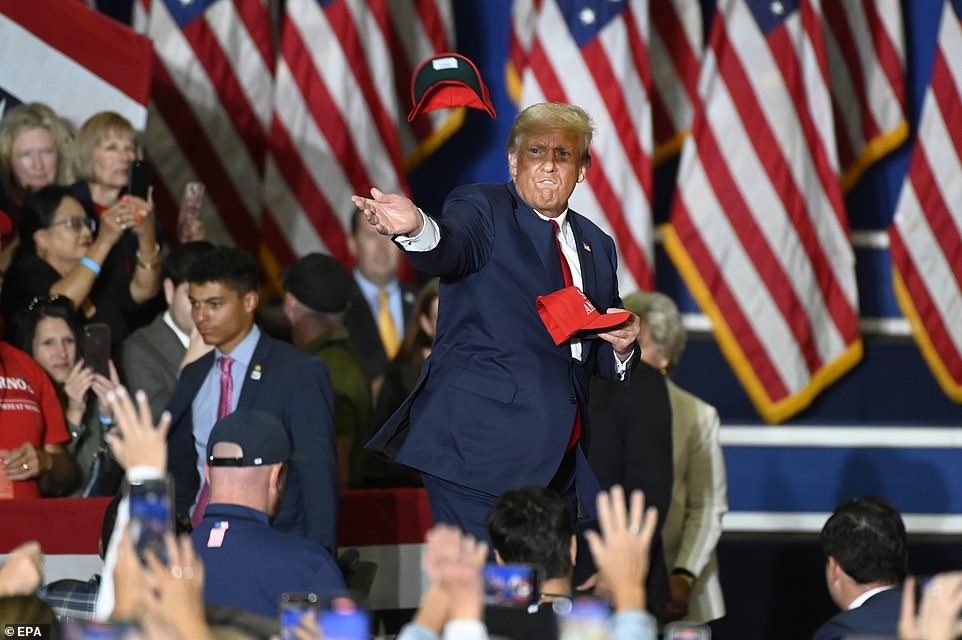 You get a hat: Donald Trump throws red ‘Save America’ hats to audience members at his rally in Warren, Michigan on Saturday, October 1 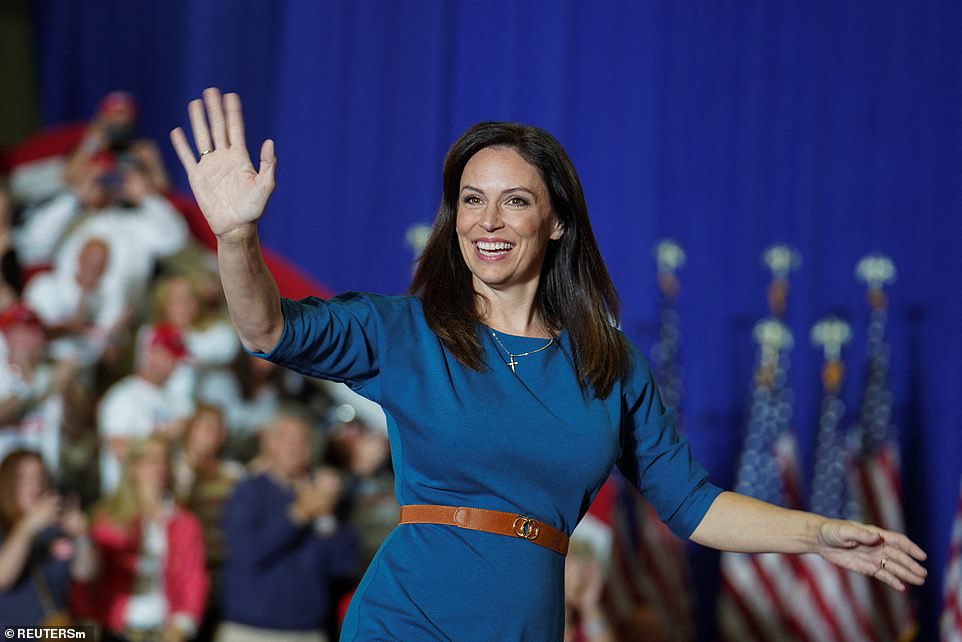 Trump took his road show to Michigan on Saturday for a rally in a state unlikely to see many flipped seats, if any, in the 2022 midterm election. 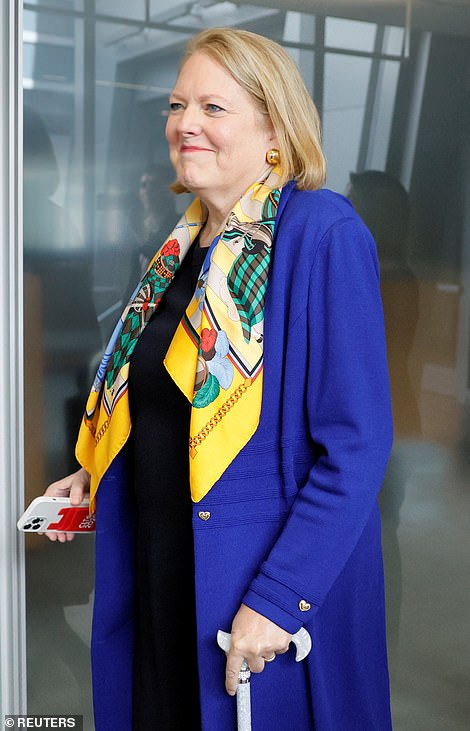 Speaking just 20 miles outside of the deep blue city of Detroit with 38 days until the midterms, four GOP Michigan candidates joined Trump after winning their primaries earlier this year with his backing.

Gubernatorial candidate Tudor Dixon has an uphill battle in the countdown to Election Day as she attempts to dethrone Michigan Governor Gretchen Whitmer.

Trump spent some of his more than hour-and-a-half remarks lamenting of the election results in Michigan in the 2020 presidential election. He also praised those who championed the effort to overturn the results.

Trump thanked Ginni Thomas for telling the January 6 select committee last week that she still believes the 2020 election was stolen.

She voliuntarily appeared to speak with committee and stuck around for roughly 4.5 hours. It’s possible that Thomas’ testimony could be shown at the next public hearing ‘if there’s something of merit,’ according to panel’s Cahirman Bennie Thompson.

Thomas’ lawyer Mark Paoletta said in a statement that Thomas answered ‘all of the committee’s questions.’

‘Beyond that, she played no role in any events after the 2020 election results,’ Paoletta continued.

Supporters are still emboldened by Trump’s claims of election fraud, cheering wildly when he vowed he and other MAGA candidates would hel restore the country to in-person voting on paper ballots. 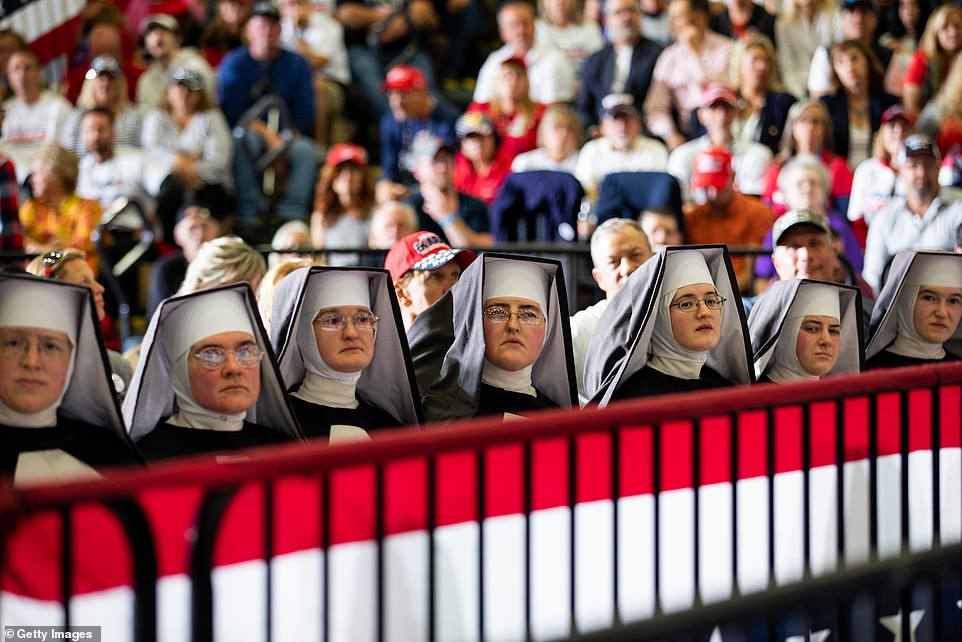 Audience members at the rally just 20 miles outside of Detroit, Michigan included nuns with the Dominican Sisters of the Immaculate Heart of Mary 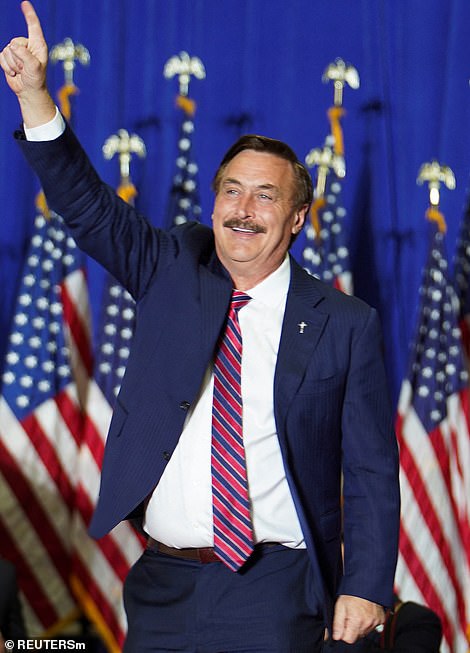 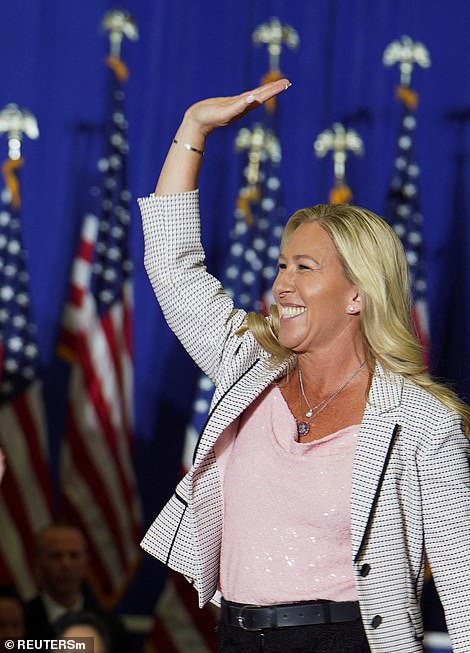 One rally goer who declined to provide their name or age told DailyMail.com that Whitmer is OK with ‘people killing their babies.’

Further asked if the Trump supporter believes the issue of abortion will make more people turn against Whitmer, she responded: ‘Oh, yes.’

Polling, however, has shown that abortion has not appeared to affect Whitmer’s chances in the elections. In fact, the incumbent’s lead has widened as the election nears, hitting a high advantage of 16 percent over Dixon last month.

Outside of their cheers, most attendees seemed largely unbothered by some of the local races in their state, with many booing with the mention of Whitmer’s name, but nearly none donning paraphernalia in support of Dixon or others – like is commonplace at other Trump rallies.

Incumbent lawmakers are running in 10 of the 13 House races in the state – and his picks for Secretary of State and Attorney General in Michigan will need to beat out incumbents in their races, as well.

The rally was held at a venue smaller than many others the 45th president visits. The Macomb Community College Sports & Expo Center in Warren, Michigan has a seating capacity of 4,000, according to the university’s website.

Before Trump’s arrival, dozens of supporters who waited all day to enter the venue started spreading out their jackets to sit or lay down on the floor with hours left until the former president’s speech.

John Gibbs did not speak at Trump’s rally on Saturday, even though the former president’s endorsement of the candidate helped him beat out incumbent GOP Representative Peter Meijer in their primary earlier this year.

Meijer was one of the victims of Trump’s revenge tour to primary all of the Republican lawmakers who voted for his impeachment.

Michigan lost a congressional district in the 2020 census, meaning that the battleground state will also have one less Electoral College vote in presidential elections over the next decade.

Both senators are Democrats – Senators Debbie Stabenow and Gary Peters – and neither are up for reelection in the 2022 midterms. There are currently seven Democrat and seven Republican members of Congress in the House for Michigan.

The Great Lakes State swung blue in 2020 after Trump scored a victory there in 2016, which helped propel him to the White House.

The flip from red to blue, and Democratic leadership in the state, led Trump and his camp to claim the results were a fraud. Efforts were focused on Michigan, along with other swing states like Arizona, Georgia, Pennsylvania and Wisconsin, to try and overturn the election. 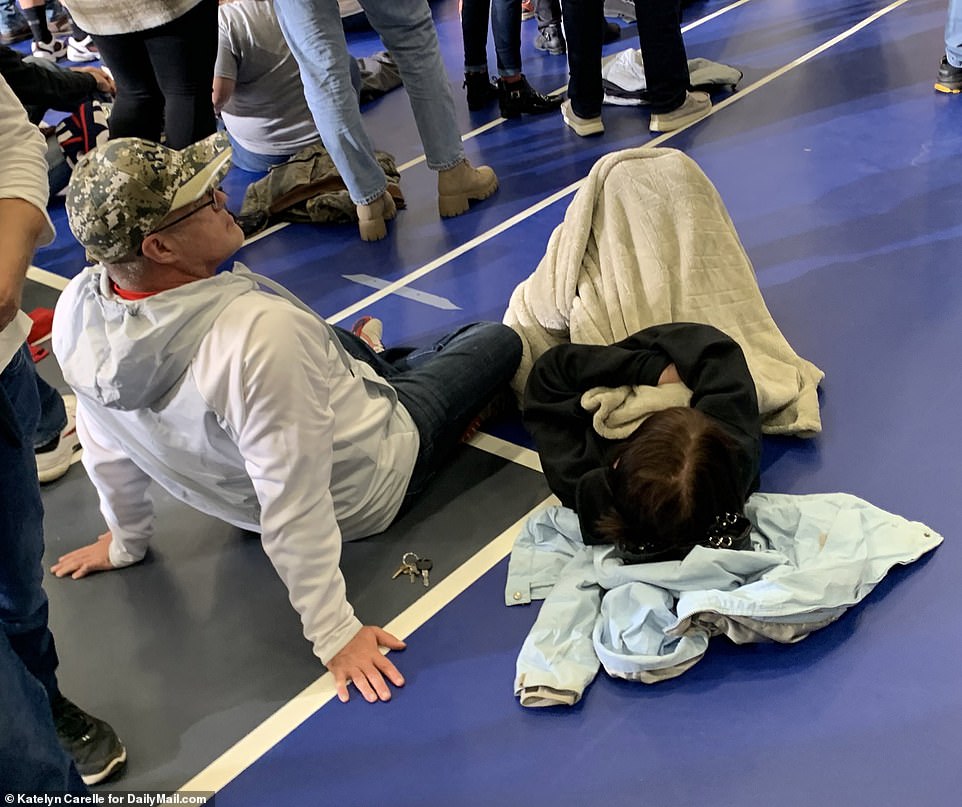 Rally goers used jackets as blankets and pillows as they sat and laid down on the ground of the Macomb Community College Sports & Expo Center in Warren, Michigan on Saturday

Georgia Representative Marjorie Taylor Greene, one of Trump’s biggest allies in the House, told supporters gathered in Michigan on Saturday that she and Florida Congressman Matt Gaetz led the efforts to ‘object to the election in Michigan on January 6.’

She also claimed that Democrats want to ’emasculate’ the cars that Americans drive in the name of environmentalism – specifically calling out Transportation Secretary Pete Buttigieg, who is gay.

Earlier in the rally, the pastor conducting the prayer, which is sometimes the only time apolitical part of a Trump rally, pleaded to big cheers: ‘Let our girls be girls and our boys be boys.’

Ironically, after several speakers demanded biological men to stay out of women’s bathrooms, venue staff had to convert the men’s restroom into women’s due to a shortage of toilets.

Several rally goers pointed out the irony, with one saying ‘if we identify as women, can we use the bathroom inside?’ after men were directed to use a port-a-potty outside the venue.