‘Kamala looks like she’s at a party she doesn’t want to be at’: Vice President’s ‘uncomfortable’ gestures and ‘forced smile’ reveal cooling relations with Joe Biden despite show of unity at White House, body language experts claim

President Joe Biden and Vice President Kamala Harris’ strained relationship was subtly communicated through their ‘awkward’ interactions at yesterday’s joint White House engagement amid reports of a rift, body language experts have claimed. Biden and Harris determinedly put on an outward show of unity and strode out onto the South Lawn with wide smiles plastered across their faces before signing a trillion-dollar infrastructure bill in front of some 800 guests. But a close analysis of their interactions reveals a level of unease between the two, with Harris looking like she was attending ‘a family event she didn’t want to be at’, according to UK-based body language expert Darren Stanton. Author and body language expert Judi James agreed, saying their gestures were an example of ‘political power jostling’. 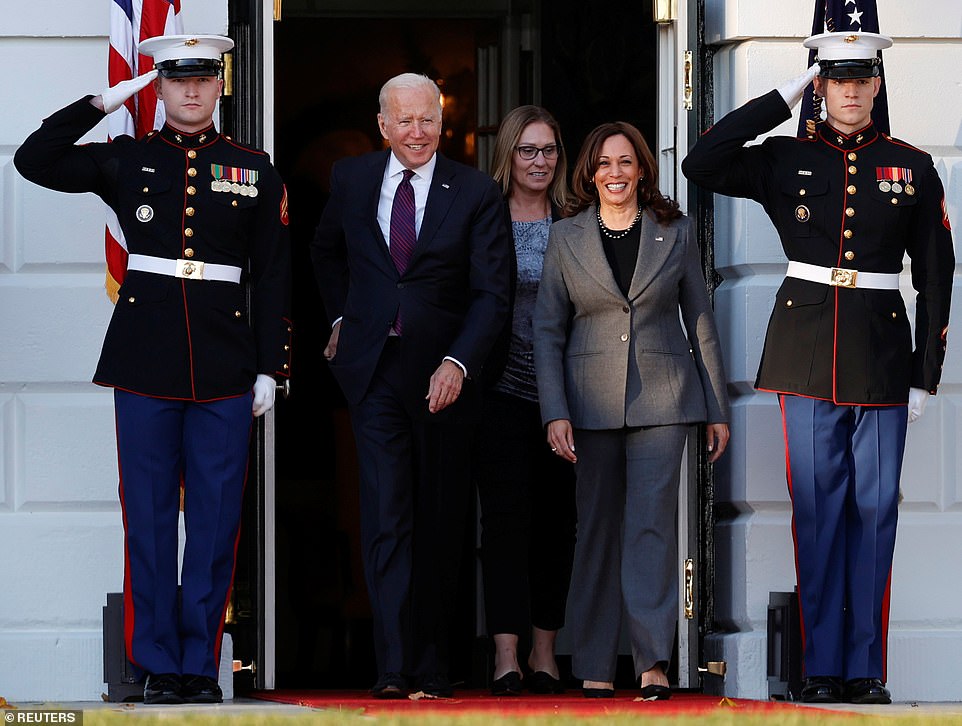 KAMALA HARRIS’ FORCED SMILE: The Vice President plastered a wide smile on her face as she and Joe Biden strode out onto the South Lawn for yesterday’s engagement, but a closer look at her eyes reveals it was all put on for the cameras, according to body language expert Darren Stanton. The President also raises his left arm to create a ‘barrier’ between them, it is claimed. Noting Harris’s forced smile, Mr Stanton added: ‘This I call the typical cheese photograph it’s the kind of photograph that you pose for at a wedding or some other family event you don’t want to be at.’ 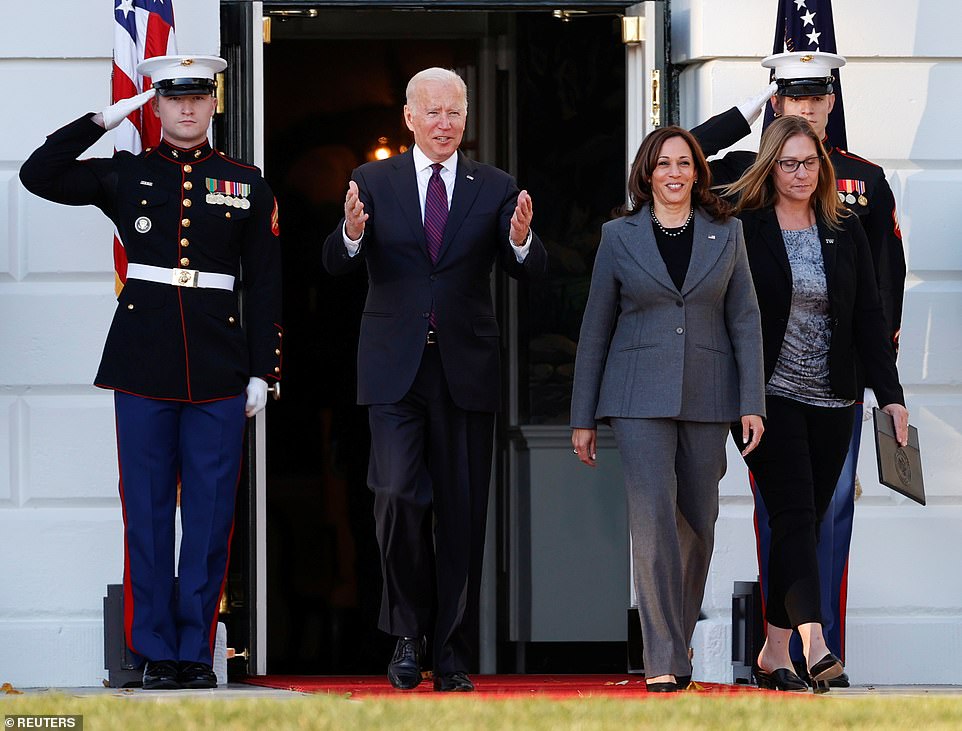 BIDEN’S ‘EMPTY’ EMBRACE OF THE AUDIENCE: Making his way across the lawn, the President raised both arms up in an ’empty’ embrace, Ms James noted, at the same time as Harris veered away from him and towards their guest. In this moment, the Vice President’s controlled gesture makes her look more ‘Presidential’ than Biden, Ms James suggested. 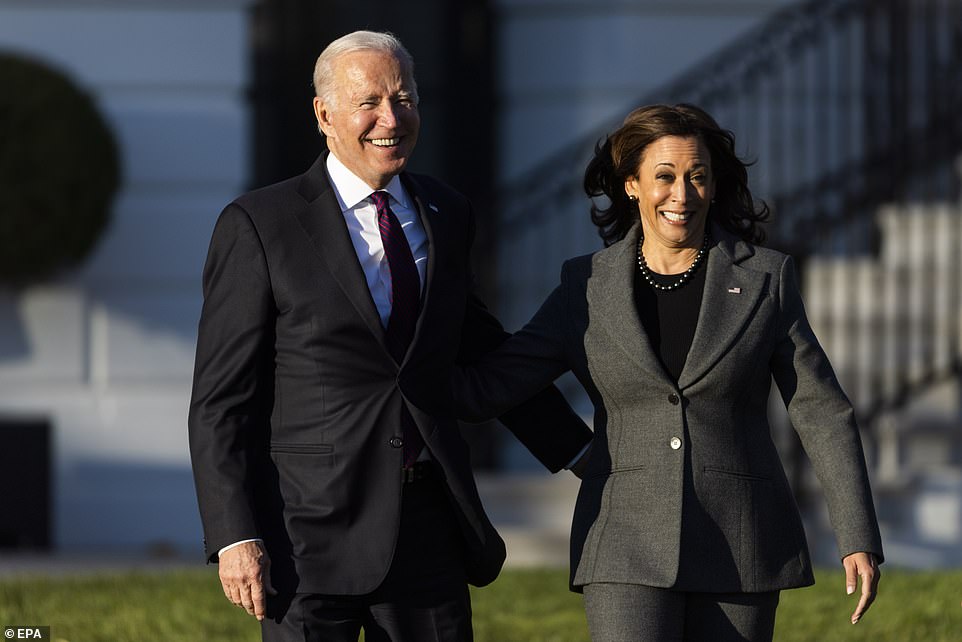 THE ‘POWER PAT’: Biden and Harris’ body language signaled ‘power jostling’ as they struggled for attention, according to Ms James. In one notable moment, President Biden reached his hand across Harris’ back in a gesture known as a ‘power pat’. 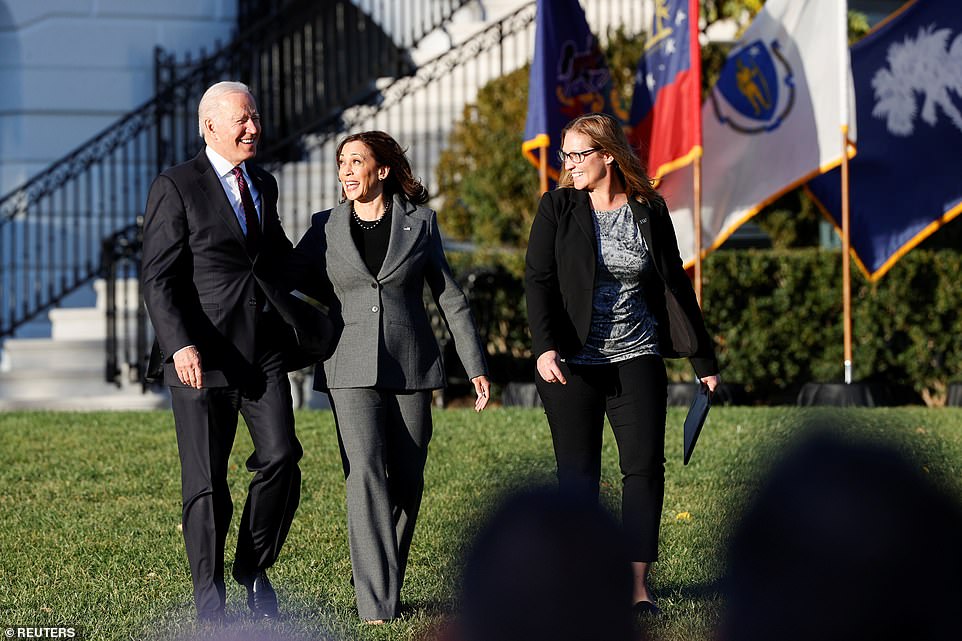 HARRIS IS UNCOMFORTABLE: Both body language experts noted Harris did not return Biden’s spontaneous gesture and appeared to be ‘surprised and uncomfortable’. The lack of a reciprocal gesture makes this looks forced and put-on. 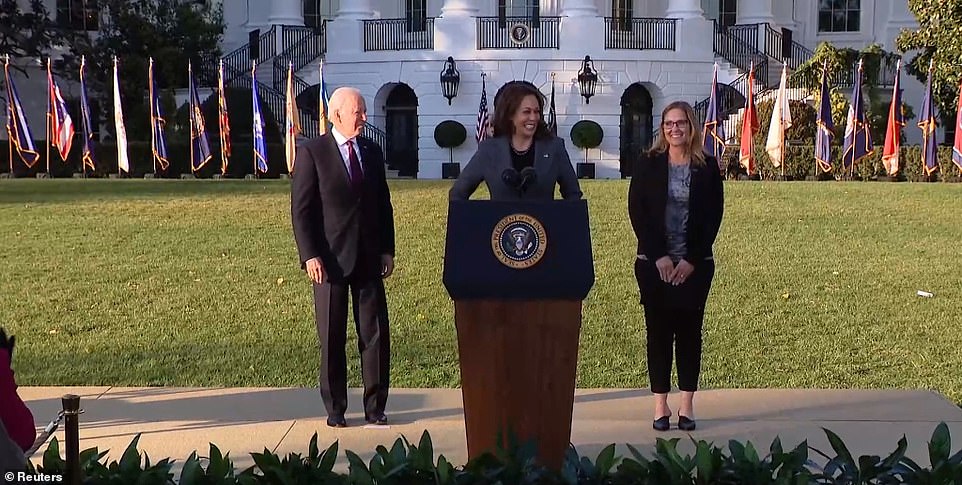 BIDEN STEALS THE LIMELIGHT: While Vice President Harris was speaking, Biden was busy gesturing and talking, in the body language equivalent of ‘talking over someone’, according to body language expert Judi James. Meanwhile Harris failed to match her body language to her unequivocal words of support for Biden, and instead looked ‘grim-faced’ during her speech. 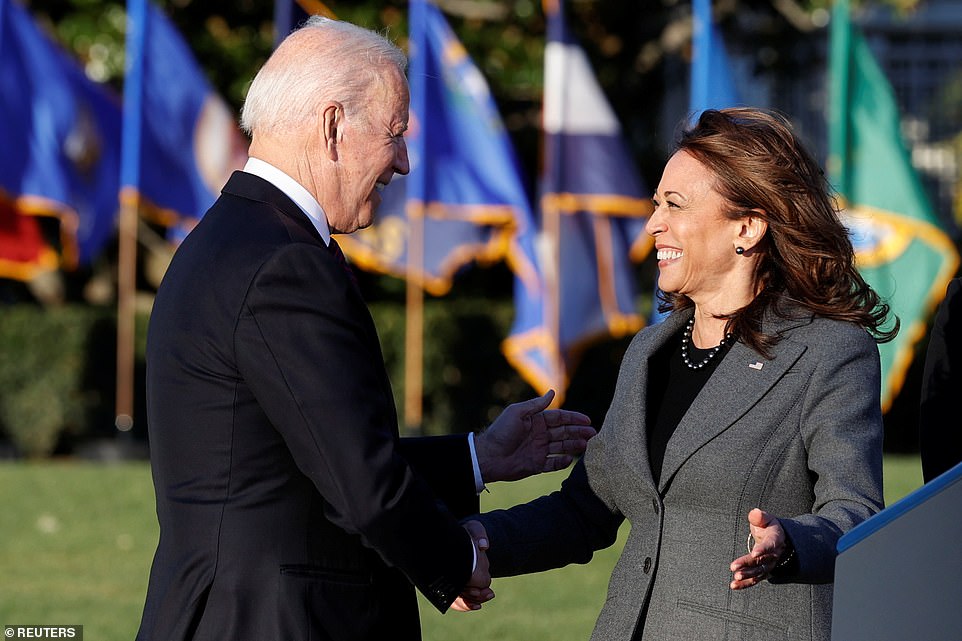 A DELAYED SMILE FROM HARRIS: When Harris finished Biden clapped and pushed his hand out in an intentional gesture to shake hands, Ms James noted. Harris missed a beat before arranging her face in a wide smile, as seen in the photo above. 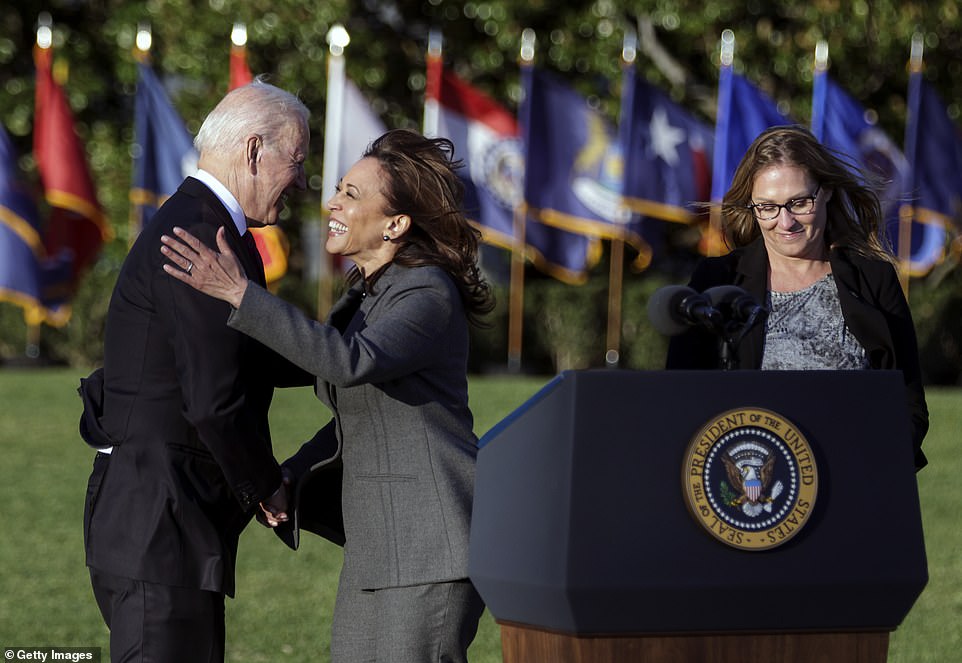 PULLED IN FOR A HUG: Biden then pulled the Vice President for a hug ahead of his address. But the intimacy was not reciprocated by Harris. ‘She responds with a distracted ritual, turning her head to look down and away,’ Ms James noted. 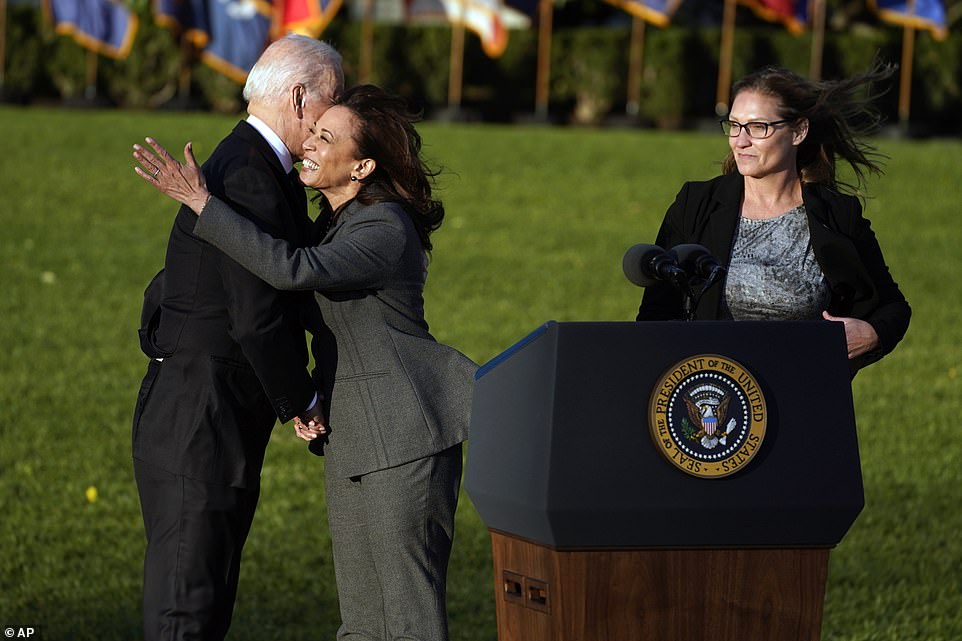 A QUICK ‘BACK PAT’: Harris signaled to Biden that she wanted the embrace to end by raising her hand for a ‘back pat’. ‘Quick pats like this are a signal to end a hug or embrace, making this a cursory and one-sided gesture of affection,’ Ms James said. 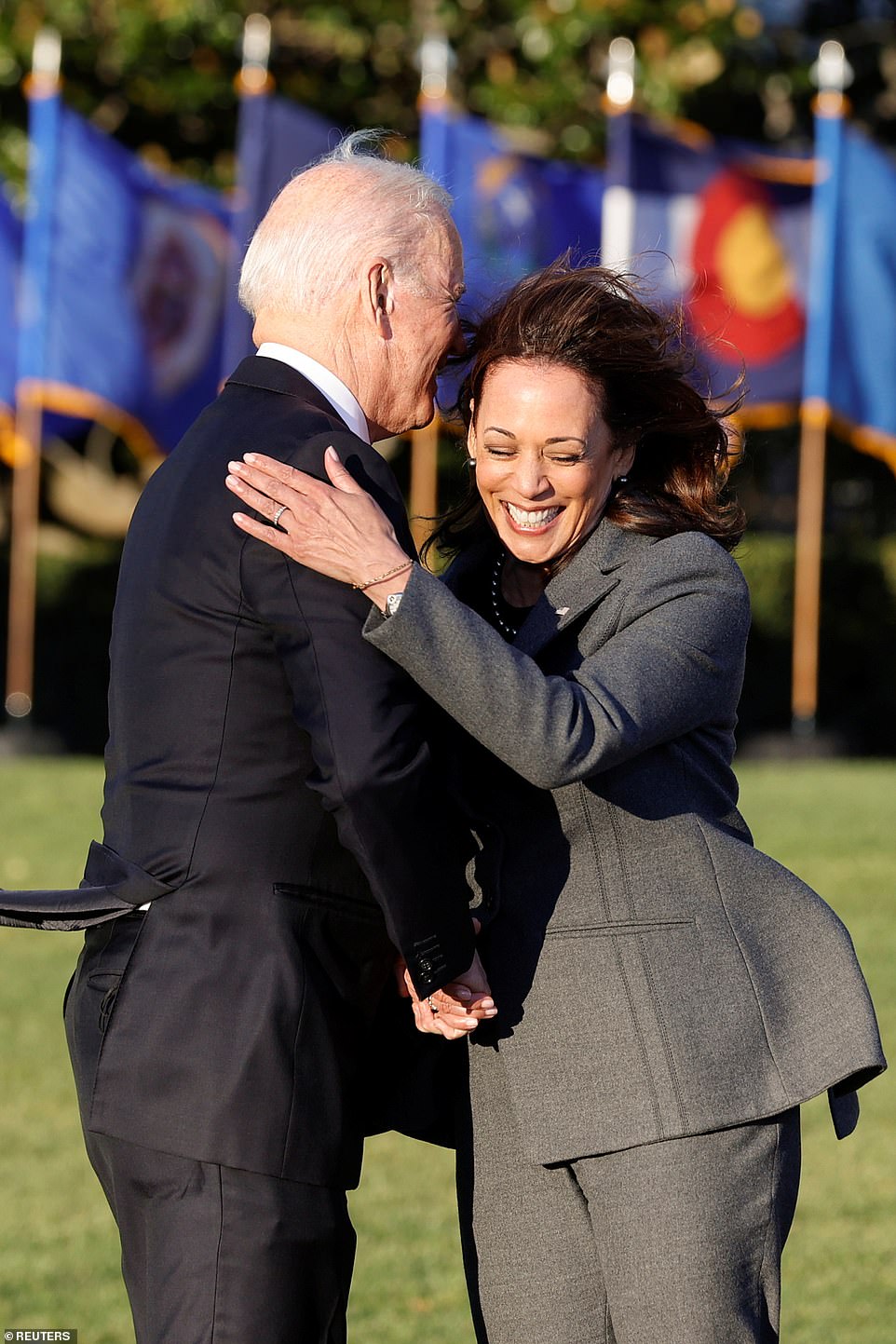 A CHILLIER EMBRACE: Mr Stanton pointed out the exchange is a far cry from the genuine displays of warmth seen earlier this year. He said the ‘partial hug’, as seen by one hand remaining in a handshake position, shows a diminished rapport.