The third goal, gleefully tucked away by Bukayo Saka will come to define this derby and live long in Arsenal folklore.

It came with a little bit of everything for the home fans to enjoy from Harry Kane’s misfortune and his unwitting assist for Saka, the new darling of the Emirates, who celebrated with a little jig, sure to go down a storm with the club’s social media department in the week ahead.

At 3-0, Arsenal could banish any lingering fears rooted in the last time Tottenham won here in the Premier League, when they fought back from two down to claim victory with a late goal by Younes Kaboul, way back in November 2010.

Now, they could kick back and enjoy the show, cheering giddily as Spurs sliced passes out of play, singing about fire drills as the away fans made for the exits and erupting in triumph at the final whistle as Mikel Arteta led his players on an impromptu lap of honour.

For Tottenham, Saka’s goal seemed to sum up a great unravelling; a feeling that nothing is going to plan and that even their best player can do no right for doing wrong.

It was a slick and lethal counter-attack. And it had started with Kane on the ball, trying to work a yard of space but he stumbled, lost control and enabled Thomas Partey to nip in and launch the break.

Kane, ever willing, chased back. Seconds later, he was back in his own penalty box, making a sliding tackle to foil Saka but while he cut out the cross, the ball spilled kindly for the Arsenal youngster, who onto it in a flash to beat Hugo Lloris. Cue the dance routine with Gabriel and Partey. 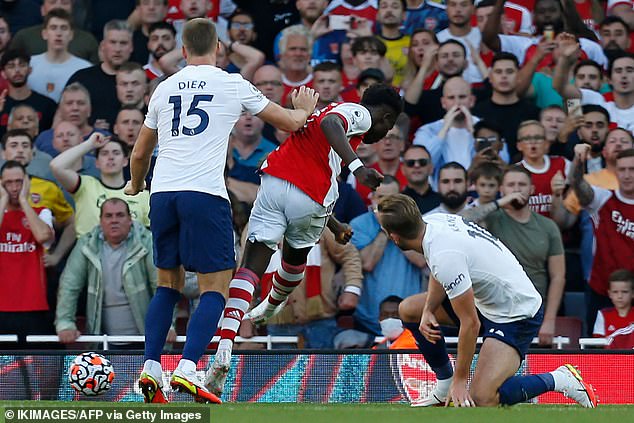 For the third Premier League game in a row, Spurs were 3-0 down. Losing 3-0 at Crystal Palace was put down as a bad day at the office and losing 3-0 at home to Chelsea was hard to swallow but this will take a long time to live down.

They let in three before half-time against their fiercest rivals and Nuno was fuming silently on the touchline in his first North London derby, before hauling off Dele Alli and Japhet Tanganga at half-time.

He saw his team improve in the second half. There was more bite in midfield with Oliver Skipp alongside Pierre-Emile Hojbjerg, but he will know Arsenal dropped their intensity by a gear.

Kane toiled away, still in search of his first Premier League goal of the season, still unable to find the spark, even against the old enemy.

No-one has scored more than his 11 goals in this fixture and Nuno must have arrived dearly hoping that, after a midweek goal in the Carabao Cup, his main source of goals could find the target and ignite one of those famous Kane goal clusters. 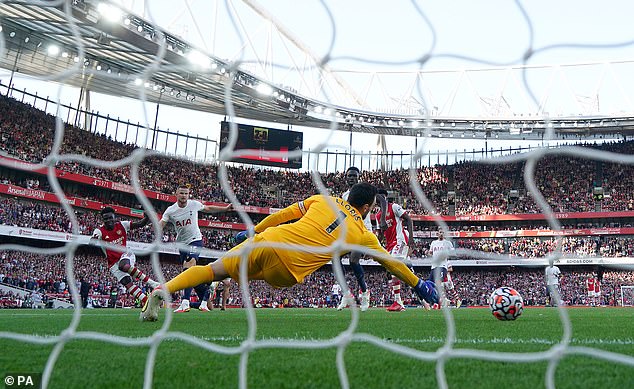 He struggled to get on the ball, however, and made no impact in the opening half hour. His first effort at goal soared high over Aaron Ramsdale’s goal, midway through the first half when the score was 1-0.

Kane was close to reducing the deficit when he headed narrowly wide from a corner and appeared to have a decent claim for a penalty in the second half when clipped by Ben White. Craig Pawson was not moved and nor were his assistants in the video booth.

There was another effort, saved by Ramsdale who excelled on his first North London derby, but this would prove to be Kane’s second derby without a goal, another one for him to forget.

When he came to an end, he shook a few hands and trudged over towards the corner of the ground where only a few Spurs fans remained.

He applauded them, presumably for sticking around, and then disappeared down the tunnel to a chorus of boos and a flurry of obscene hand gestures from the jubilant home fans.

Kane looks out of sorts, the legacy of his failed bid to escape North London for Manchester, which is in turn the backdrop to every chance he missed and every game he loses.

Chances have been hard to find since Nuno arrived and, without his goals, his spirit and his leadership Spurs are drifting deeper into trouble. Three encouraging 1-0 wins at the start of the season have been eclipsed by three hefty defeats.

All of the good vibrations in North London are red and white. It is Arsenal who can see a brighter future with young players rising to the challenge and showing signs of improvement.

Tottenham are suffering, looking a little lost, unsure what comes next and aware the man most likely to lead a revival would rather not be there.

If there is solace to be found it comes in the knowledge these cycles can turn quickly.

Less than a year ago, Spurs beat Arsenal to go top of the Premier League on a day when the defining image was Partey, turning his back on the game and limping off injured as Kane scored.