Kanye West and Kim Kardashian were in the same building to support their kids at their respective basketball games as they are reportedly working on a child custody and property settlement amid the rapper’s downfall over anti-Semitic rants.

The 45-year-old artist was seen donning his signature derelict style as he arrived to the children’s sporting event in Calabasas, California on Friday night.

Meanwhile his estranged wife Kim, 42, was also seen arriving at the gymnasium separately as she also came to support the kids as the duo share daughters North, nine, Chicago, four, and sons Saint, six, and Psalm, three.

Interesting week: Kanye West and Kim Kardashian were in the same building to support their kids at their respective basketball games as they are reportedly working on a child custody and property settlement amid the rapper’s downfall over anti-Semitic rants

The mother-of-four donned a relatively low-key look as she sported a baggy black hoodie over florescent yellow mini dress and black flip-flop sandals.

This comes as divorce attorneys are working together to hammer out a child custody and property settlement to avoid a scheduled December trial, reported TMZ on Thursday.

The rapper who has seen his career and net worth go into freefall over his anti-Semitic rants, is said to be working with Beverly Hills attorney Nick Salick, after his New York lawyers Bob Cohen and Bernard Clair parted ways with him in the wake of his rants.

The publication reports Salick is aiming to work out a custody and property settlement with Kim’s lawyer, Laura Wasser, who is known as the ‘disso queen. 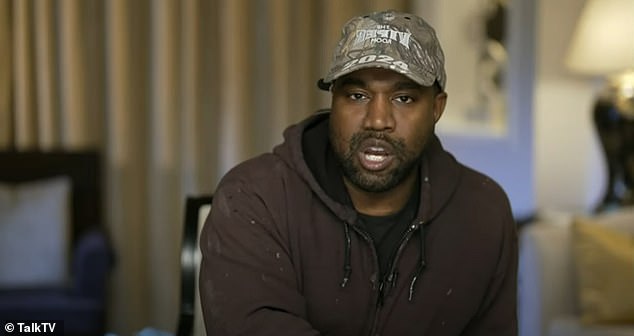 Time to talk: Kanye West and Kim Kardashian’s divorce attorneys are working together to hammer out a child custody and property settlement to avoid a scheduled December trial, reports TMZ

It was previously claimed that West has hired Camille Vasquez, the lawyer who defended Johnny Depp, to handle his business interests.

Vasquez, who gained national fame over her representation of Depp in his heated defamation trial with ex-wife Amber Heard, will be among the lawyers at the Brown Rudnick firm now working with West, TMZ reported.

The law firm declined to confirm to DailyMail.com whether or not it has secured West as a client.

Kardashian filed to divorce West in February of 2021 after more than six years of marriage. She then dated comedian Pete Davidson, 28, from October 2021 to August this year. 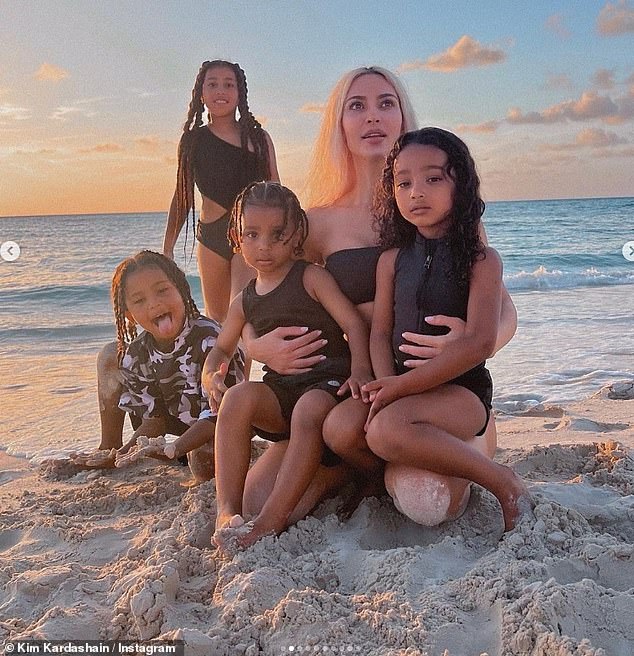 The rapper, 45, who has seen his career and net worth go into freefall over his anti-Semitic rants, shares four children with Kim, 42

The pair’s co-parenting relationship has been contentious at times. Earlier this month Kanye said on the Mind Full podcast that Kim raises the children ’80 per cent of the time.’

He said: ‘Even to this day, I’ll still give Kim advice on things that can help, because that’s gonna go to the kids. She’s still got to, basically, 80 percent of the time, raise those children.’

TMZ also claims that that although Kanye has been at sporting events to support his children, he has not ‘exercised any custodial rights in months.’

Kanye has previously said he wants their children to attend his exclusive Christian school, the Donda Academy – which is located in a secret location in the Simi Valley just north of Los Angeles, and charges $15,000 per student.

But Kim is said to have refused this due to the children being settled in school.

On Thursday, the school announced it would be closing for the remainder of the 2022-23 school year as the rapper continues to face fallout for his  comments.

DailyMail.com has contacted representatives for Kanye West and Kim Kardashian for comment. 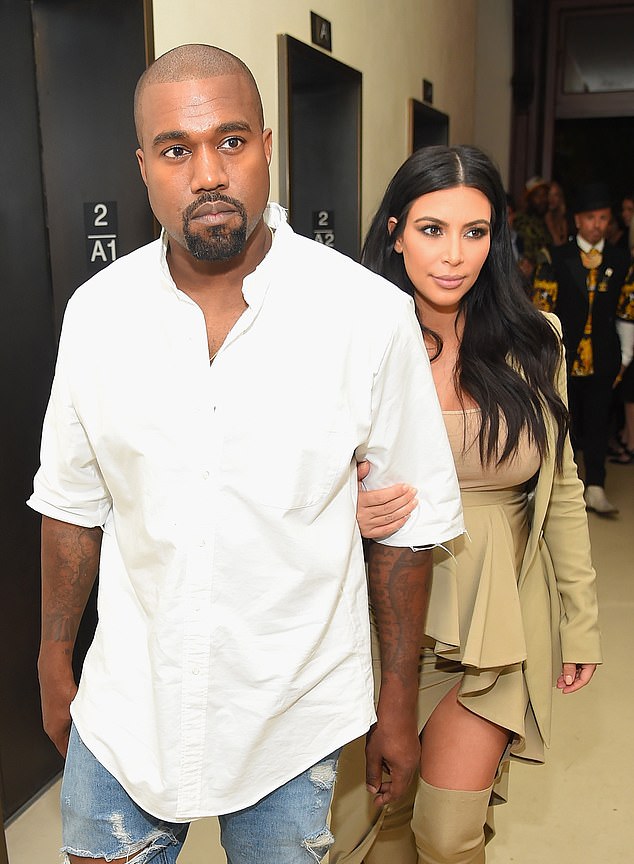 Happier times: Kardashian filed to divorce West in February of 2021 after more than six years of marriage (Kim pictured with Kanye in 2015)

West has had a tumultuous time securing an attorney – in August it was revealed his then-fifth divorce attorney Samantha Spector had officially withdrawn from his case, several months after she filed to be removed on account of an irreconcilable breakdown with the rapper.

Spector, who has previously represented celebs such as Amber Heard and Dr. Dre’s ex-wife Nicole Young, was hired by West earlier this year amid his acrimonious split with the reality star.

On Monday, Kim finally broke her silence regarding the controversy, taking to Twitter to publicly support the Jewish community and condemn any hate speech.

‘Hate speech is never OK or excusable. I stand together with the Jewish community and call on the terrible violence and hateful rhetoric toward them to come to an immediate end,’ the billionaire wrote.

It came after anti-Semitic banners reading, ‘Kanye is right about the Jews,’ were hung from a Los Angeles freeway on Saturday following the rapper declaring war against Jewish people earlier this month.

A group of about five people from the Goyim Defense League, a group that spreads conspiracy theories about Jews, gathered in hats and masks while hovering around a series of anti-Semitic banners on the 405 freeway.

The group appeared to support West after his now-deleted Tweet from October 9 read: ‘I’m a bit sleepy tonight but when I wake up I’m going death con 3 On JEWISH PEOPLE.’

Group members were seen tossing up the Nazi salute as drivers read the signs: ‘Honk if you know… Kayne is right about the Jews… GOYIM TV.TV. REV 3:9, John 8:44.’

West has recently been vocal about anti-Semitic content and conspiracy theories on social media and media appearances. 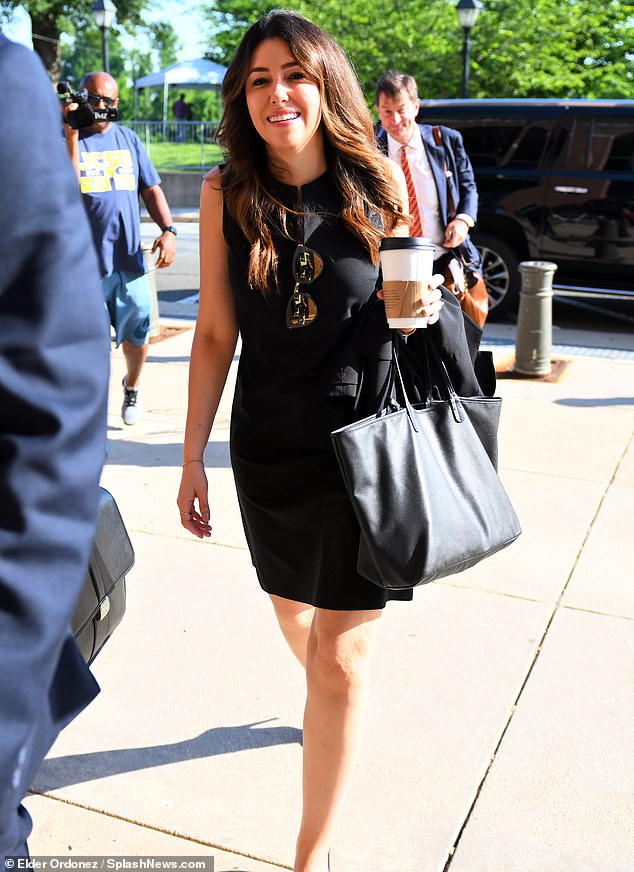 Appointment: It was previously claimed that West has hired Camille Vasquez, the lawyer who defended Johnny Depp, to handle his business interests

Khloe was one of a number of celebs to share Jessica Seinfeld’s post, as others included Julianne Moore, Amy Schumer, Amanda Kloots and Kathy Hilton.

Earlier this month the rapper wrote in a tweet: ‘I’m a bit sleepy tonight but when I wake up I’m going death con 3 On JEWISH PEOPLE. The funny thing is I actually can’t be Anti Semitic because black people are actually Jew also. You guys have toyed with me and tried to black ball anyone whoever opposes your agenda.

Deafcon – also known as defense readiness condition – is an alert used by the US Armed Forces to indicate how quickly the military can be deployed during deadly emergencies and attacks.

West was asked by Piers Morgan last week if he regretted the tweet and he said, ‘No – absolutely not, absolutely not … I fought fire with fire – I’m not here to get hosed down – that’s a different type of freedom fighter.’ 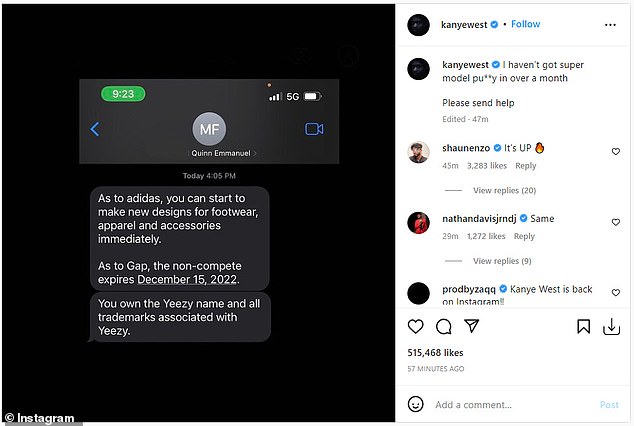 Kanye West on Wednesday evening issued his first response to being dropped by Adidas on Monday – a move which cost him $1.5 billion

While Kanye has been known to have unpredictable outbursts on social media – he was diagnosed with Bipolar disorder in 2016 – his rants have become more frequent this year.

West has had several high-flying partnerships dropped in the aftermath of making a series of anti-Semitic outbursts.

The father-of-four’s wealth could plummet to below $1billion after the termination with the brand, which comes after several other lucrative deals have been dropped.

His deal with Balenciaga and Gap have fallen through, and the rapper was yesterday dropped by talent agency CAA.

In a statement GAP said: ‘Anti-Semitism, racism and hate in any form are inexcusable and not tolerated in accordance with our values.

‘On behalf of our customers, employees and shareholders, we are partnering with organizations that combat hate and discrimination.’

His Twitter and Instagram accounts were restricted, with the social media platforms saying they removed his posts that online users condemned as anti-Semitic. 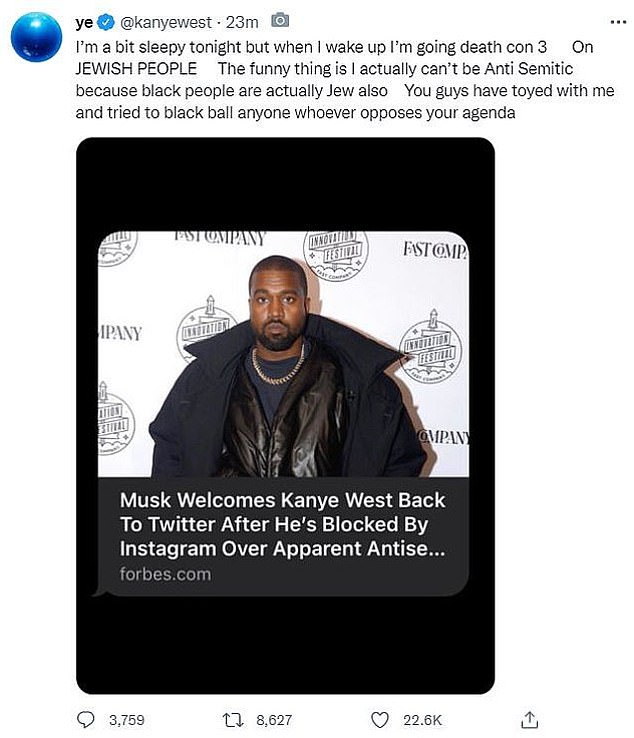 In a statement Adidas said: ‘Adidas does not tolerate antisemitism and any other sort of hate speech.

‘Ye’s recent comments and actions have been unacceptable, hateful and dangerous, and they violate the company’s values of diversity and inclusion, mutual respect and fairness.’

The company also claimed that cutting ties with the rapper is likely to have a ‘negative impact of up to €250 million on the company’s net income in 2022’.

The partnership began in 2013, after he let a collaboration with Nike, and was expected to be a ten-year-long production.

Before being dumped by the brand Kanye had already begun publicly sparring with Adidas executives, accusing them of ‘stealing’ his ideas.

West owns the Yeezy brand but Adidas pay him an annual royalty fee to sell the products. 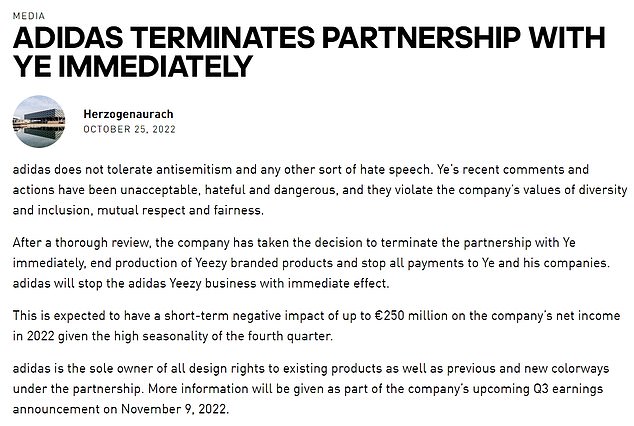 German sporting goods behemoth Adidas has terminated its partnership with Kanye West amid controversial behavior from the American rapper and designer. A statement posted in the media section of its website called his comments ‘unacceptable, hateful and dangerous’ 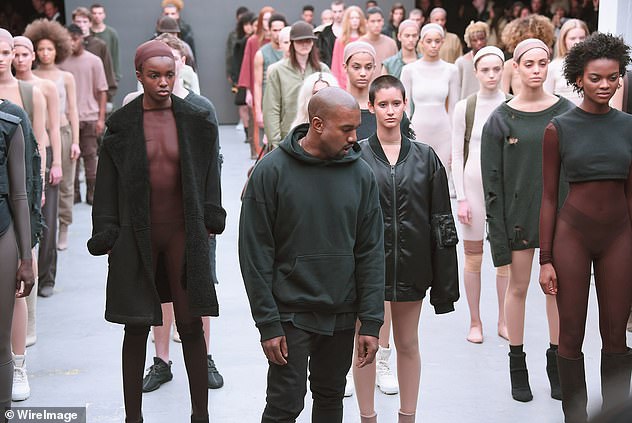 GAP and Kanye ended their partnership in September. European fashion house Balenciaga has also cut ties with him

Adidas, whose founder Adi Dassler belonged to the Nazi Party, found themselves coming under increasing pressure to drop Kanye after several anti-Semitic comments.

Experts have also claimed that the resale market for Yeezy’s will explode because they will not be produced in mass quantities anymore.

TMZ claimed that the resale market would skyrocket, with companies clinging onto the stock of Yeezy’s to see if Adidas would part ways with the singer.

In a statement to The Hollywood Reporter, the president of Temple Isaiah of LA, where Andrews is a director, said: ‘Dr. Andrews immediately resigned from Donda Academy following Ye West’s tweet.

‘Her last day was October 11, 2022 as she felt she could no longer support the organization.’

West has faced criticism in recent weeks for his bizarre behavior, including introducing a series of shirts branded with ‘White Lives Matter’ at Paris Fashion week.

During an episode of Drink Champs podcast with N.O.R.E, West claimed that George Floyd died from taking fentanyl and that Derek Chauvin’s knee ‘wasn’t even on his neck like that.’

Floyd’s family have since lodged a $250million lawsuit against the star over the comments, calling them ‘repugnant’ and saying he used ‘false statements’ to ‘promote his brands’.

Kanye also made the incorrect claim that he is the ‘richest black man in American history’ – a title that belongs to Vista Equity’s Robert F. Smith.

He said: ‘A lot of this stuff for me as the richest black man in American history, that put $140million in JP Morgan, and never even had a chance to… not even get to deal with them. We’ll speak at a different time.’

In 2021, West was inaccurately described as the richest man in America after Bloomberg reported the valuations of his companies at $6.6billion.

Much of that figure came from sales that hadn’t yet been realized and were never an indication of his personal wealth – with Forbes estimating his net worth at around $1.8billion.

JP Morgan Chase has declined to comment on why it cut ties with the rapper.

Candace Owens has defended Kanye, saying: ‘Corporations can dissociate from Ye but they will not steal from him.’

The decision from Adidas to terminate its partnership with Kanye represents the latest blow to the rapper who has seen numerous working relationships tarnished in light of recent controversies. 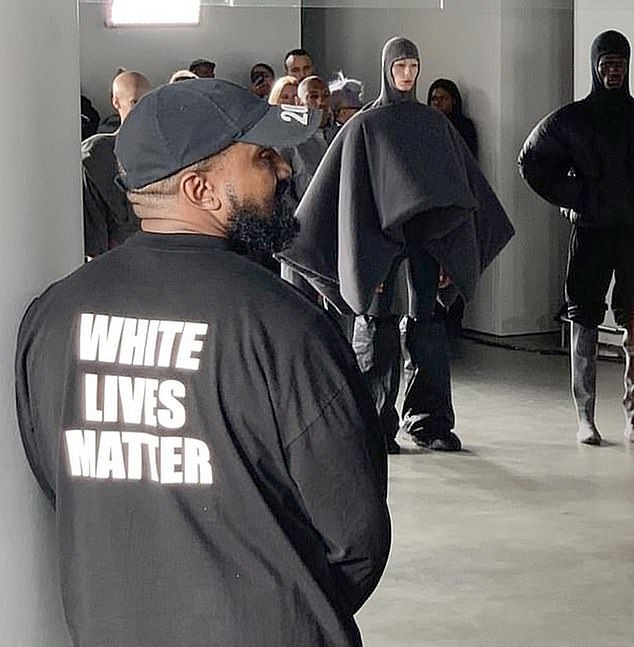 The father-of-four’s wealth could plummet to below $1billion after the termination with the brand, which comes after several other lucrative deals have been dropped