The Kardashian family has been called many things – flashy, underhanded, fame loving. But the one thing they can’t be called is cheap.

On Tuesday morning Kris Jenner announced via Instagram she and her daughters Kourtney, Kim, Khloe, Kendall and Kylie are donating an impressive $500,000 to the relief efforts after Texas was devastated by Hurricane Harvey.

The Keeping Up With The Kardashians producer noted she had taken on Kevin Hart’s Sunday challenge to donate at least $25,000 to charities helping the victims.

Opening their wallets: Kris Jenner announced on Tuesday she and her daughters are donating $500,000 to relief efforts after Hurricane Harvey trashed coastal Texas 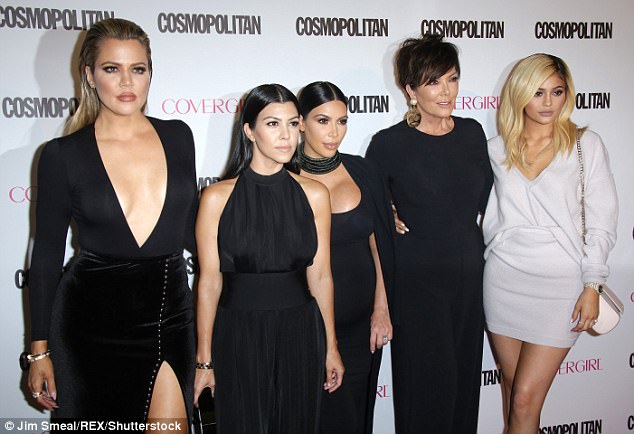 They should be proud: Kris with (from left) Khloe, Kourtney, Kim and Kylie in 2015; not seen is daughter Kendall

The momager’s note read: ‘My daughters and I accept your challenge @kevinhart4real. We will be donating $500,000 to @americanredcross and @salvationarmyus today to help those affected by Hurricane Harvey.’

She added: ‘We have been watching the heartbreaking footage of the catastrophic flooding in Houston and our hearts go out to the people of Texas.’

She then urged her 17.8m followers to do what they can as well. 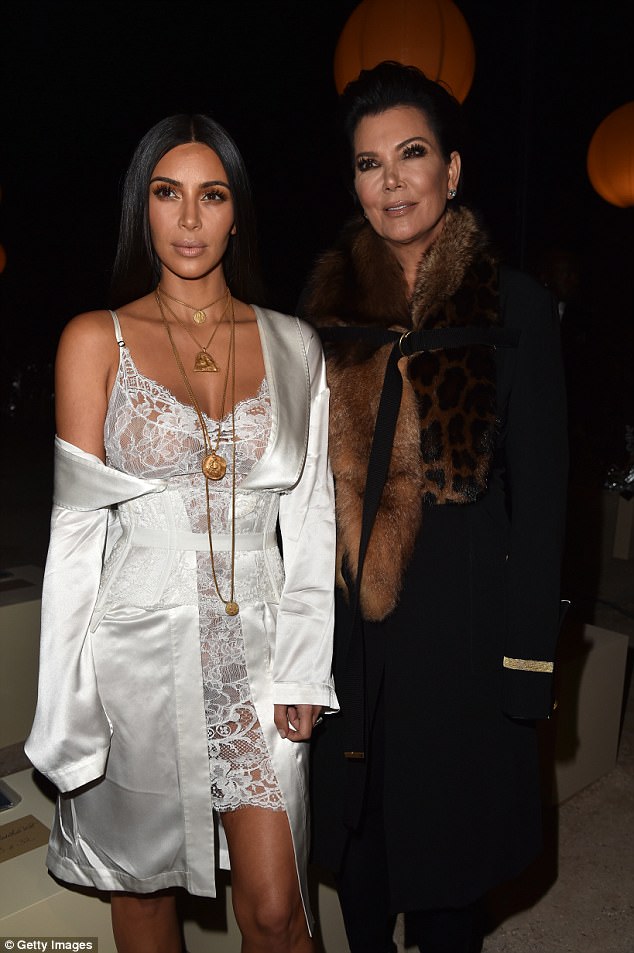 They are in step: Kim and Kris both commented on Harvey victims; seen in 2016 in Paris

‘Go to redcross.org and helpsalvationarmy.org to find out how you can help. We must all stand together in times of need! #HurricaneHarvey #RedCross #SalvationArmy.’

Kim added the tweet: ‘Houston we are praying for you! My mom, sisters & I will be donating $500,000 to @redcross and @salvationarmyus today #HoustonStrong.’

Khloe also took to Twitter: ‘My sisters, mom and I accept your challenge Kev!’

It appears as if black sheep Rob Kardashian, who is in a legal dispute with ex Blac Chyna, was not a part of the donation.

From KKW: Kim added the tweet: ‘Houston we are praying for you! My mom, sisters & I will be donating $500,000 to @redcross and @salvationarmyus today #HoustonStrong.’

From Koko: Khloe also took to Twitter: ‘My sisters, mom and I accept your challenge Kev!’

Hart issued a challenge to some of his fellow celebrities to donate relief money.

The actor took to Instagram on Sunday night and shared a video where he calls on fellow A-listers to provide relief aid to the thousands of people in need.

‘Serious moment right now, I’ve just been caught up to speed with everything that’s going on in Houston and this s*** is unbelievable,’ Hart states in the video.

‘I think we’ve participated in a lot of challenges on the internet. Some meaningful, some meaningless, but we’ve all done ’em. I’ve been a person whose partaken in several of them. 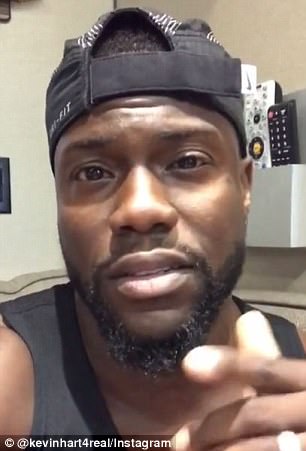 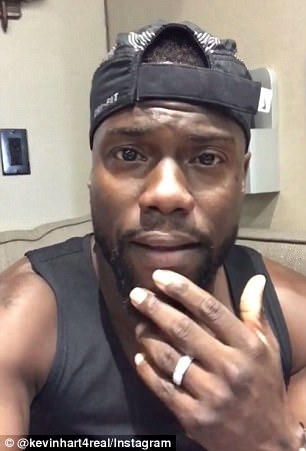 In the wake of the devastation left by Hurricane Harvey, comedian Kevin Hart (pictured) issued a challenge to some of his fellow celebrities to donate relief money 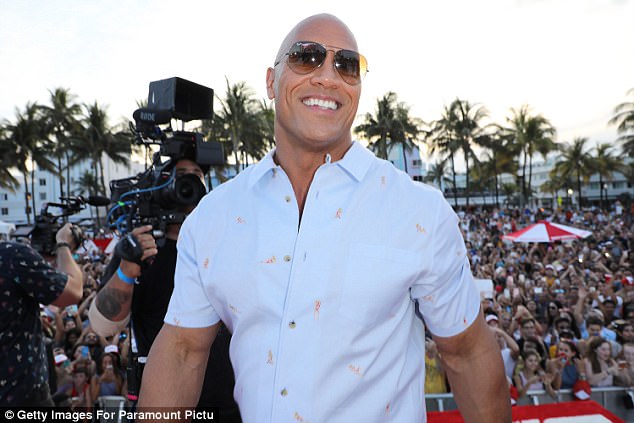 The actor took to Instagram on Sunday night and shared a video where he calls on fellow A-listers, including Dwayne ‘The Rock’ Johnson (file above), to provide relief aid to the thousands of people in need

‘At this point, I’m going to start a real challenge. I’m challenging a lot of my celebrity friends to follow my lead and donating $25,000 to Hurricane Harvey to the Red Cross.

‘At this point this is a serious matter. I think that people are in bad shape and they need help. I’m going to lead the charge and step up this way.’

‘I think when you do it, you all should tag somebody else,’ he added. 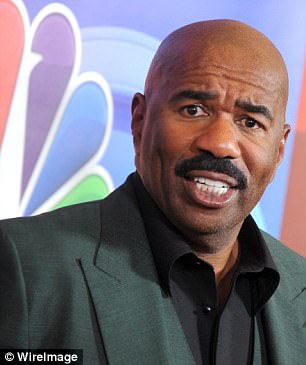 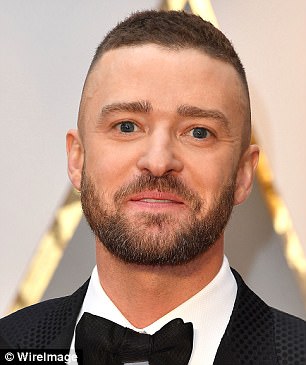 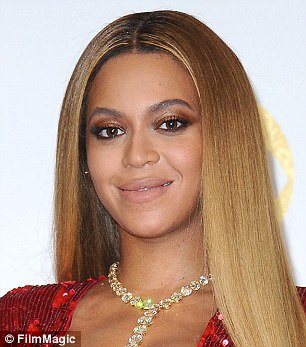 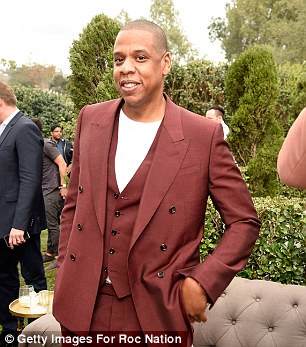 Donations to Hart’s fundraising campaign for Harvey relief can be made by clicking here.

Hart isn’t the only celebrity to come forward and donate thousands to help those affected by the powerful storm.

The Rock shared on Monday: ‘Stay strong Houston and hold onto faith. Me and my family know what you’re going thru. We survived the eye of Andrew and became stronger – so will you. All my love and strength. * Link in my bio in you can donate a buck or two to our Houston families in need.’

Country singer Chris Young said in a Twitter video that he created an online fundraiser for the Red Cross and donated $100,000.

She also tweeted a link to the Red Cross’ donation efforts to more than 100 million followers on Twitter. 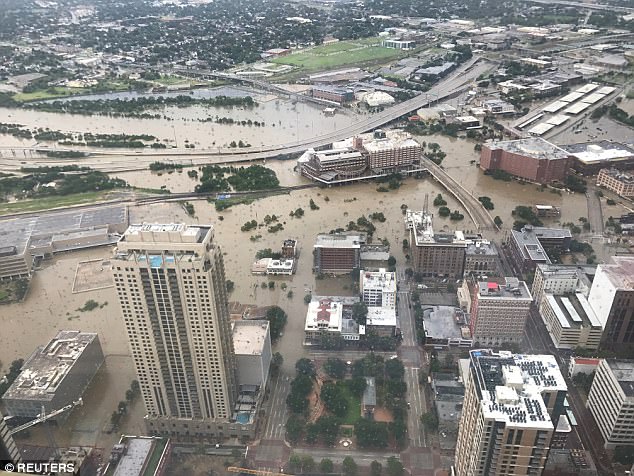 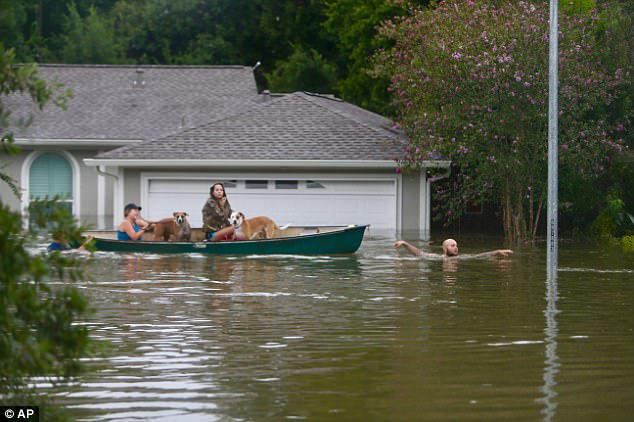 A family evacuates their Meyerland home in Houston. Rescuers answered hundreds of calls for help Sunday as floodwaters from the remnants of Hurricane Harvey rose high enough to begin filling second-story homes

Hurricane Harvey has already dumped a historic 11 trillion gallons of water on Texas – with another 27 inches of rain falling so far and another 23 inches expected to come within the next few days.

Experts said the aftermath of the catastrophic hurricane could equal the level of destruction of Katrina in 2005.

The storm has claimed the lives at least five people and FEMA, the Federal Emergency Management Agency, revealed it would take the area years to recover from the storm which is the worst this decade.