A mother who went viral for complaining about Melbourne’s second lockdown has decided to embrace her meme queen title as ‘the real Karen from Brighton’.

Jodi Grollo moaned she had walked all the streets of the affluent coastal suburb earlier this month, prompting Victorian Premier Daniel Andrews to slam her.

Now, her son has set up an Instagram account for her, using the platform to show off her glamorous lifestyle and poke fun at Mr Andrews.

Her most recent photo on Saturday shows a line outside of a Brighton café with a cheeky caption criticising the Victorian government’s handling of hotel quarantine.

Jodi Grollo (pictured), who is known as ‘Karen from Brighton’, stands outside of her house with immaculately-trimmed hedges and a large door. Her son has set up an Instagram account for her to show off her glamorous lifestyle and poke fun at Victorian Premier Daniel Andrews

In a post from Friday, Ms Grollo was pictured in a face mask making a ‘W’ sign outside of her home, which had immaculately-trimmed hedges and a large door.

‘Wearing my mask, still doing Briiighton – because it’s what we need to do,’ she captioned the post.

‘Dan, time for you to talk to Neil Mitchell & tackle those hard questions. IT’S WHAT YOU NEED TO DO!’

She posted another photo outside of a café captioned: ‘Dan Andrews won’t support struggling Brighton businesses so I’ll have do it for him.’

The ‘Karen’ meme has taken off this year, and refers to an entitled middle-aged white woman who often asks for the manager at shops and restaurant.

‘I’ve already spoke to the manager let me speak to the premier,’ one of Ms Grollo’s posts read. 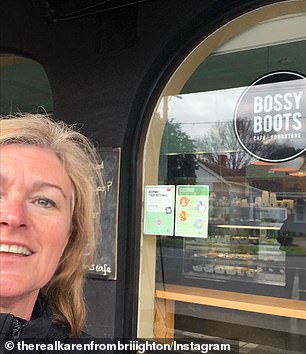 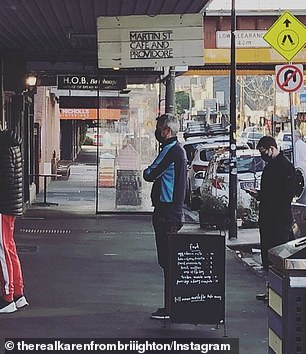 Pictures of cafés that were posted to Instagram. The caption reads: ‘Dan Andrews won’t support struggling Brighton businesses’ (left) and that ‘social distancing at my local cafe working better than the social distancing in hotel quarantine’ (right) 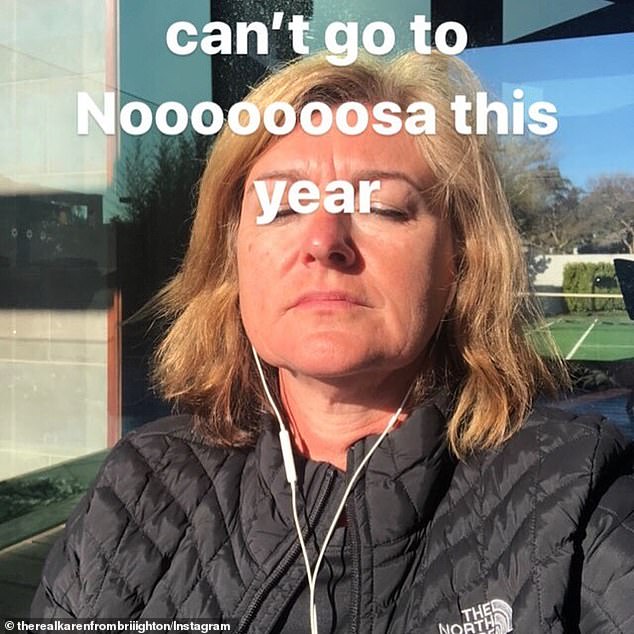 Many of the posts on the comedic Instagram account play on the Brighton accent, which features elongated vowels

Many of her posts play on the Brighton accent, which features elongated vowels.

‘No self respecting Briiighton woman would be caught on Triple M. We only listen to 3AW,’ one post read.

Another post said: ‘Can’t go to Noooooosa this year.’

Speaking to the Herald Sun on Saturday, Ms Grollo revealed how how to correctly pronounced ‘Karen from Brighton’ with the local inflection.

‘It should be pronounced Kaaaren not Karen and its Briiiiighton not Brighton,’ Ms Grollo said.

Despite going to a boutique baker in the neighbouring suburb for a loaf of bread, Ms Grollo said she is following all lockdown rules.

‘Oh yes, I wear a mask. Not the best of looks, but at least mine is black. Nobody does black quite like Melbourne,’ she told the publication. 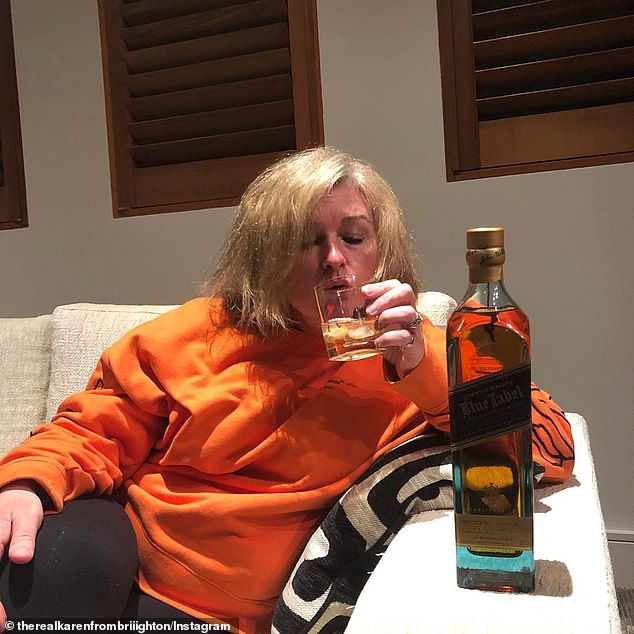 A self-aware meme queen, Ms Grollo has poked fun at herself with one photo of herself downing a glass of Johnnie Walker whiskey. ‘Can’t walk the Tan anymore, may as well walk the Johnnie,’ the post was captioned, referencing the city’s Tan Track

Mr Grollo initially went viral when she claimed to have ran out of places to walk, having trudged through all of the streets of the affluent coastal suburb.

‘Well, you get sick of walking the same streets. You know, I’ve done all of Brighton,’ she told Nine News while walking the city’s Tan Track.

A self-aware meme queen, Ms Grollo has even poked fun at herself with one photo of herself downing a glass of Johnnie Walker whiskey.

‘Can’t walk the Tan anymore, may as well walk the Johnnie,’ the post was captioned.

Ms Grollo, who is the daughter of pokies baron Bruce Mathieson, previously told The Herald Sun she visited a nearby suburb for bread while in COVID-19 lockdown.

‘I went to Hampton to buy bread too,’ she said.

She also had plans to stroll around Albert Park Lake, about 10 kilometres north of Brighton. 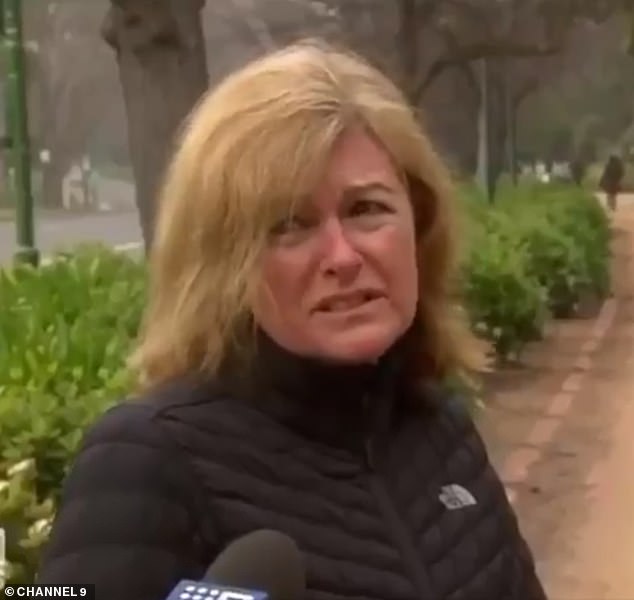 Ms Grollo, dubbed ‘Brighton Karen’, went viral after she claimed to have trudged through all the streets of the affluent coastal suburb

Victorian Premier Daniel Andrews previously slammed Melburnians who complained about the stay-at-home orders amid a second wave of COVID-19 infections.

‘I’ve got a very clear message to every single Victorian, particularly some of those featured on social media: whether you are in Broadmeadows or Brighton, stay at home means stay at home,’ he said on Saturday.

‘And if walking your local streets is boring, well, being bored is much better than being in intensive care. That’s my clear message.’ 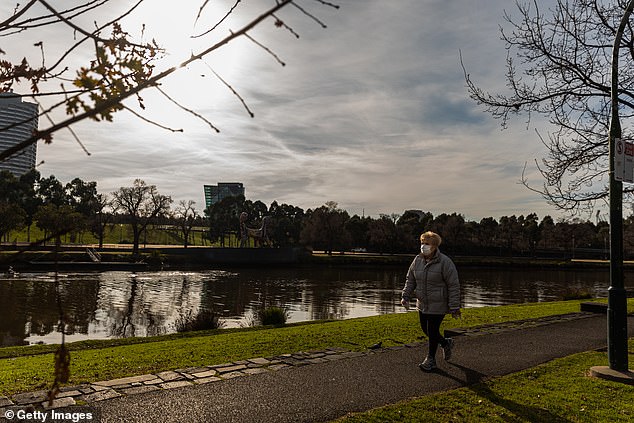 Pictured: A woman wearing a mask is seen walking along the banks of the Yarra River on Friday

Ms Grollo said she was not bothered by Mr Andrews’ rebuke, or the hundreds of angry comments online, and hadn’t seen them anyway.

‘I’m not on social media so I didn’t see any [of the backlash]. To be honest, I found it funny – it made my weekend,’ she earlier told The Herald Sun.

Ms Grollo’s father is one of the state’s richest people, having an estimated $870 million fortune in 2019.

Her husband Gianni Grollo is also well-heeled, being related to construction and developer giants Bruno and Rino Grollo. 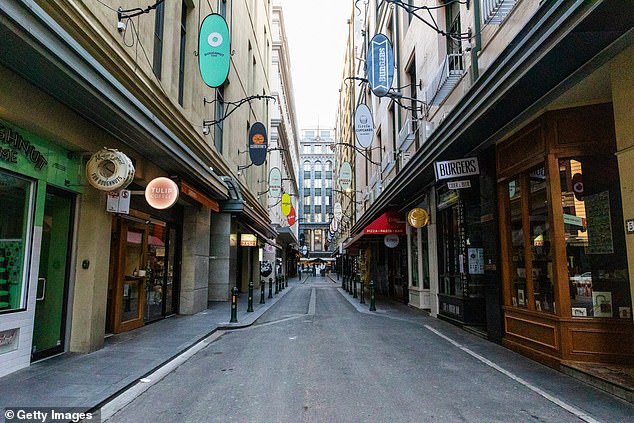 Pictured: An empty Degraves Street is seen at the usually peak morning period on Thursday