By Joshua Fox For Daily Mail Australia and Monique Friedlander

Taking to Instagram on Wednesday, the 44-year-old shared a cheery family snap of himself, new wife Jasmine Yarbrough, 34, and their pet pooch Chance The Yapper enjoying Boxing Day festivities.

‘Some one found the scoobie snacks. Happy days. Merry Christmas and happy new year everyone,’ Karl penned in the caption.

In the photograph, a beaming Jasmine was seen perched on Karl’s lap with one arm around his shoulder.

The former model wore a yellow cropped top and matching bottoms that revealed a glimpse of cleavage.

Meanwhile, Karl donned a breezy white T-shirt worn unbuttoned as he grasped their comically-dressed dog with both hands. 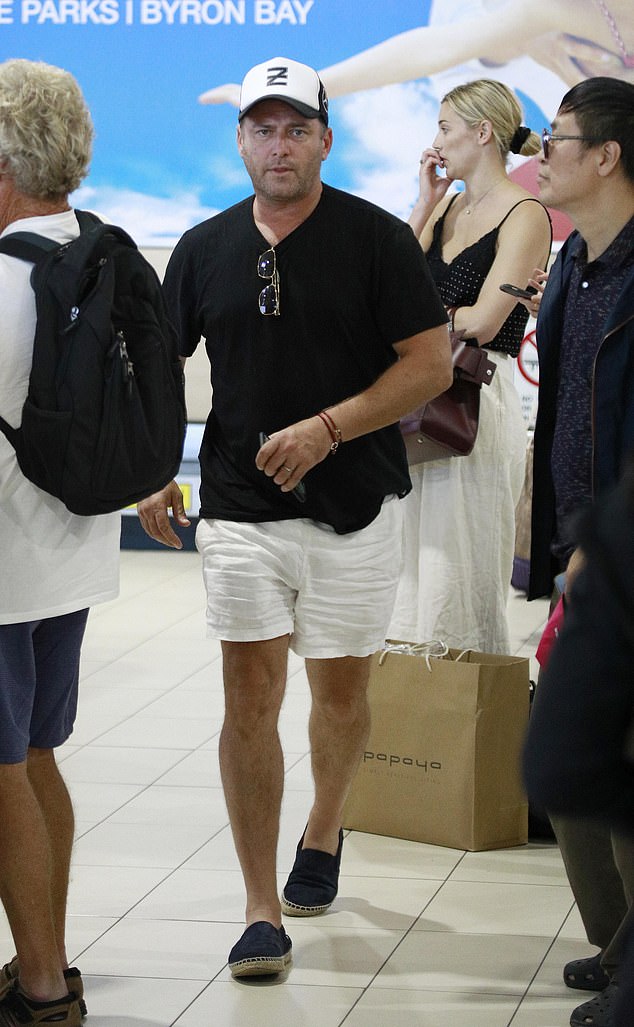 ‘It’s f**king Christmas’: Hours earlier, the axed Today host raised eyebrows when he descended into a bizarre rant directed at a photographer at Gold Coast Airport

Karl’s cheery disposition is at odds with footage of him taken hours earlier at Gold Coast Airport.

The axed Today host raised eyebrows when he descended into a bizarre rant inside the busy terminal, lashing out at a photographer who had taken photos of the newlyweds enjoying festive down time.

Clad in a black T-shirt, white shorts and a trucker cap, an irate-looking Karl swore at the photographer and asked him if he had a ‘disease.’ 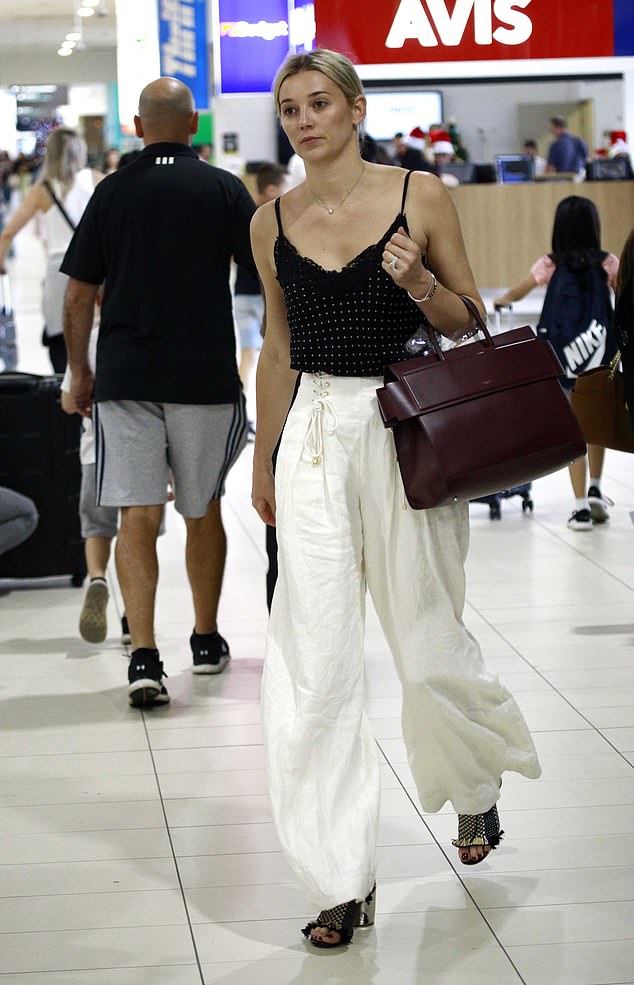 ‘Take your f**king camera and get out that f**king door, it’s f**king Christmas,’ Karl was heard yelling by onlookers.

He then stormed up to the photographer and continued his rant.

‘Why are you shaking? Have you got some disease, are you sick in the head? You got a s**t job?,’ he continued, adding: ‘It’s Christmas day. Go home!’ 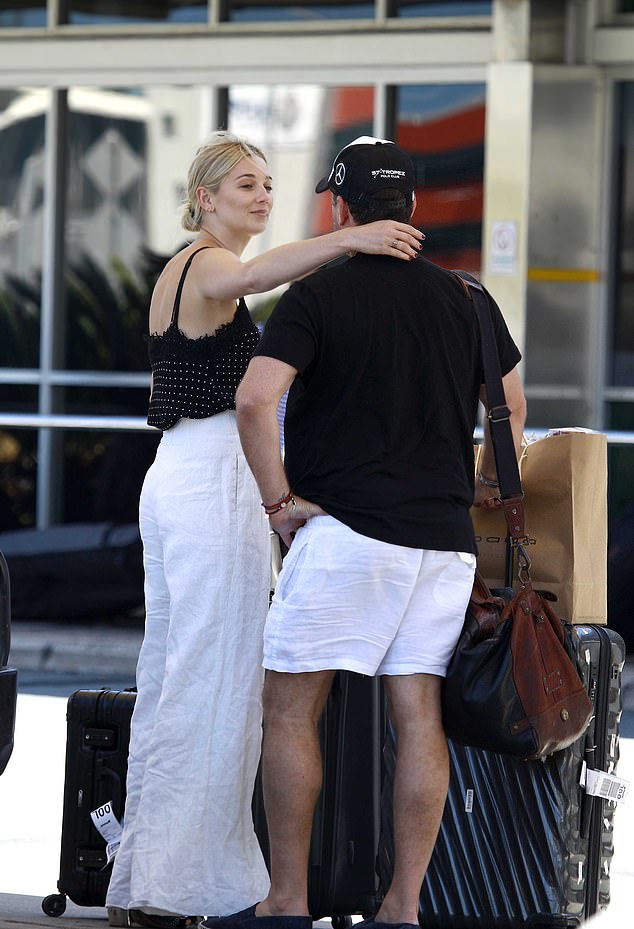 It’s OK babe! Jasmine was seen consoling her frustrated husband by wrapping one arm around his shoulders and giving him a small smile

Holidaymakers with young children were forced to steer clear of the incident, dragging their children away from earshot of Karl’s rant.

Jasmine meanwhile, looked red-faced as she waited for their luggage.

On the day, the blonde shoe designer looked casual in high-waisted white trousers and a black and white camisole top, flashing her new wedding band and engagement ring. 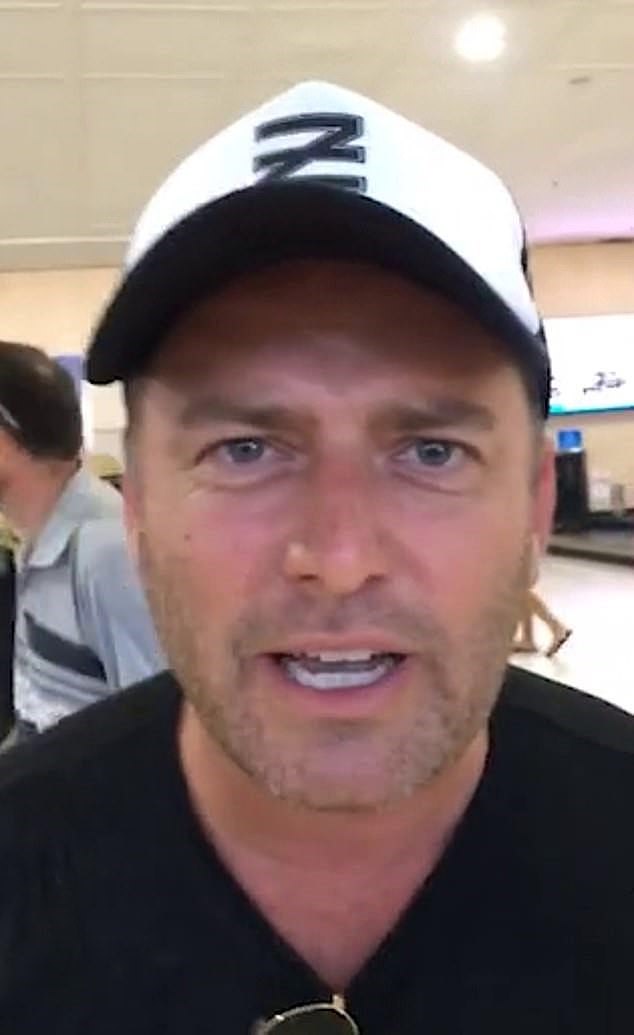 Ranting: ‘Why are you shaking? Have you got some disease, are you sick in the head? You got a s**t job?,’ he continued, adding: ‘It’s Christmas day. Go home!’ Karl raged at the photographer