The Today hosts interviewed the treasurer on Friday, three days out from the nation’s next phase of the immunisation program.

Langdon said the launch of the program had been ‘chaos’ and asked Mr Frydenberg if he believed they are still on track to have the whole country vaccinated by October.

Mr Frydenberg said: ‘Well the chief medical officer, the prime minister, have reaffirmed the goal is to get those vaccines out to all Australians by October and that’s our goal, that’s what we’re working towards.’

Stefanvoic said the GPs have been ‘bagging out’ the government’s rollout all week, with the breakfast TV host himself admitting he ‘can’t work out why you’ve been so slow’.

‘Well, again, this is a massive logistical exercise. I don’t think you can ever underestimate the task that is ahead of us,’ Mr Frydenberg responded.

The treasurer said other countries have also faced hiccups in their rollout.

‘But from Australia’s perspective, we’ve obviously suppressed the virus very successfully,’ he said.

‘We want to roll out the vaccine as quickly as possible.’ 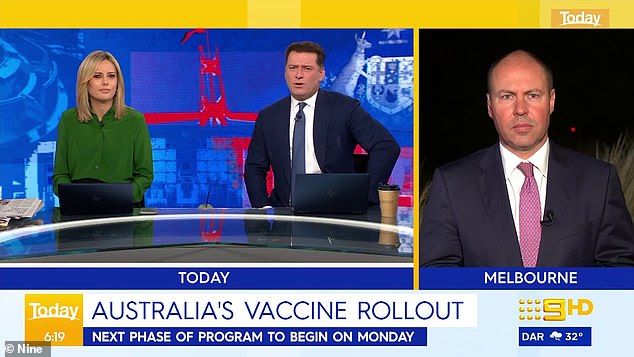 More than six million Australians become eligible to receive their coronavirus vaccine next week – but there have already been serious problems with the rollout.

Many GPs were caught off guard by the government’s announcement they were taking bookings while some are still waiting to be told how many doses of vaccine they will receive.

‘Perhaps they should have been a little bit more clear with the public that actually this is a really slow start to the rollout,’ he told ABC radio. 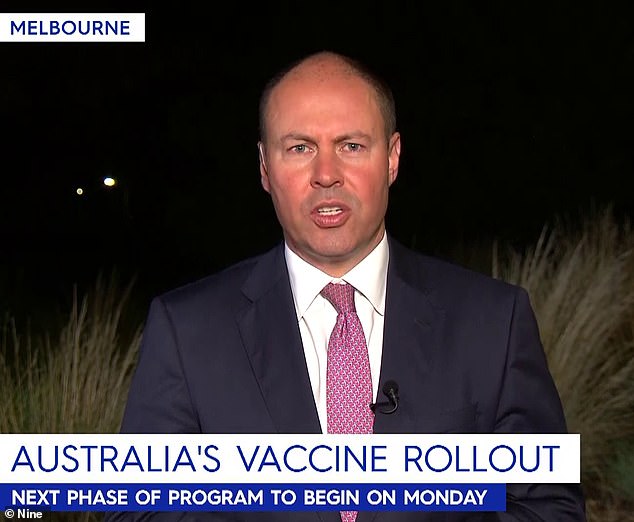 Australia is lagging behind many other countries and some medical clinics remain confused about the timelines.

Germany, France and other European nations will resume using the AstraZeneca vaccine after regulators found the benefits outweighed the risks.

Dr Khorshid said people could have absolute confidence in the safety of the vaccine, which will be given to most Australians, as well as the Pfizer jab.