Karl Stefanovic has clashed with Bill Shorten after declaring Islamic State brides and their children stranded in Syria should not be brought back to Australia.

Cabinet’s national security ­committee will meet on Tuesday to formally approve a rescue plan to repatriate more than a dozen families who recently underwent ‘risk assessments’ following a secret ASIO mission to the war-torn nation.

Sixteen Australian women and 42 children have been held in al-Roj refugee camp in northeast Syria near the Iraqi border for three-and-a-half years following the fall of Islamic State in March 2019.

The Today Show host on Tuesday morning said there was ‘no way in the world’ those families should be allowed to return to Australia after leaving to join their husbands fighting for the terror group.

The former Labor leader was tight-lipped about his feelings on the matter, and said Australians would want to know that ‘natural security is intact’.

‘I mean a lot of these kids are under six of course and they didn’t have any say in what happened to them, but it is a national security matter and there is probably not much more I can add,’ Mr Shorten said on the breakfast show.

Stefanovic then said Mr Shorten’s comments made it sound like he wasn’t in support of the move.

‘No not at all,’ Mr Shorten argued.

‘I don’t have sympathy for some of those blokes who went over there, no sympathy at all, but if you’re a kid under six lets not pretend anyone really asked their permission.

‘I can see both points of view.’ 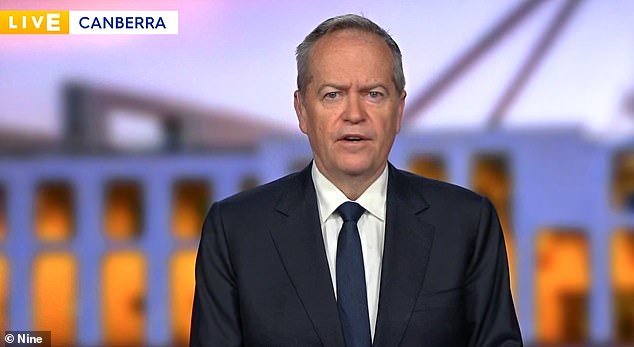 Mr Shorten said it was a matter of national security, and noted there were children under six that should be allowed to return to Australia

But his comments weren’t enough to convince Stefanovic who said he didn’t believe Mr Shorten would be supporting the move if he ‘had a choice’.

‘Oh no, if I’ve conveyed that, that’s not right at all,’ the Government Services Minister responded.

‘I just want to reassure people it’s about national security first, they’ll be the considerations, a lot of these are kids are under six so I’m not going to pretend you just give up on Australian citizens under six.’

The women and children will be taken to a third country in the Middle East before coming back to Australia.

‘I think if you make a decision to go overseas with someone and fight for Islamic State, you’re making the decision as a family, there’s no way in the world you should be allowed to come back here,’ Stefanovic said.

The federal government’s controversial move to reverse the policy banning foreign fighters and those who fled to Syria and Iraq to assist them has divided opinion in Australia. 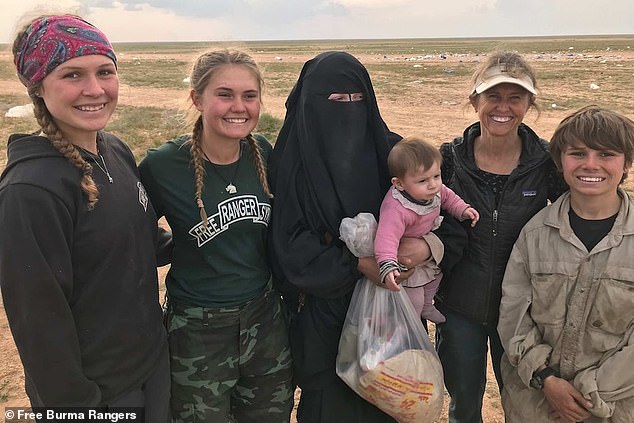 The federal government’s controversial move to reverse the policy banning foreign fighters and those who fled to Syria and Iraq to assist them was met with division in Australia. (pictured is Australian woman Zehra Duman (centre) is seen with aid workers from the Free Burma Rangers in Syria)

‘I don’t see how we can bring refugees out of Sudan, out of Afghanistan and out of other countries that are war-torn and leave Australian citizens sitting in such a terrible state.’

He stressed women and children rescued from the detention camp won’t be whisked to Australia straight away and will need further assessment before they can return home, a process that could take months.

‘They’re going to take them to a host nation somewhere in the Middle East and give them a holistic assessment- psychological, education, medical and that takes weeks and then slowly unpack whether it is trauma or any medical issues and then start building them up to integrate back in Australia,’ Mr Healey explained.

‘Most of the young kids probably don’t even speak English or have had formal education so that would be one of the processes.’

The Project’s Waleed Aly said what he was describing sounded similar to other deradicalisation programs, which have a ‘sketchy’ track record overseas.

But Mr Healey was extremely confident families would be successfully reintegrated back into Australia without issues – despite some public outcry.