On Thursday, former Today host Karl Stefanovic was caught ‘liking’ an Instagram comment from a fan suggesting that it was a mistake by management to dump him.

And on Friday, the Channel Nine star broke his silence to announce that he was embarking on a road trip with his new wife Jasmine Yarbrough.

Karl, 44, posted a selfie from inside his car, alongside Jasmine, 34, her brother Josh and his girlfriend Emily Baker, Jasmine’s sister Jade and the newlyweds’ pet dog Chance the Yapper.

No dramas! Sacked Today host Karl Stefanovic has broken his silence after being caught ‘liking’ an Instagram comment criticising Channel Nine – as he escapes on a road trip with his wife Jasmine Yarbrough’s family

Karl captioned the picture, ‘Road trip with the whanau. Bags being in the back.’

‘Whanau’ is a Māori language word for extended family.

The update was Karl’s first Instagram activity since it emerged on Thursday that he had ‘liked’ a comment from a fan which suggested it was a mistake by Nine management to dump him from Today. 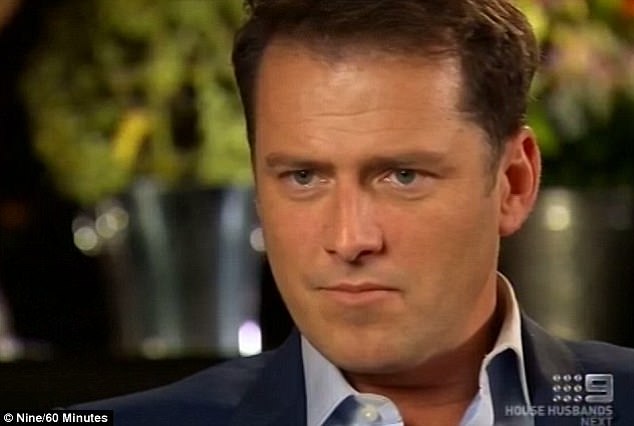 Hmm! The car selfie was Karl’s first Instagram activity since it emerged on Thursday that he had ‘liked’ a comment from a fan which suggested it was a mistake by Nine management to dump him from Today

The comment read: ‘There’s always three sides to a story, his, hers and somewhere in between… but it’s none of anyone else’s business anyway! I can’t wait until the ratings drop even lower and they realise it wasn’t you that was the problem after all.’

The comment Karl chose to ‘like’ was notably different in tone to his public statement issued shortly after getting axed on December 19.

‘I’m moving forward with a sense of excitement about what’s to come,’ he said. ‘I’m happy to be home with my family and friends. I’m looking forward to Christmas with loved ones. I’ve got a lot to be thankful for.’

In another statement, he had praised Channel Nine for allowing him to host ‘the best show on television’ for 14 years. 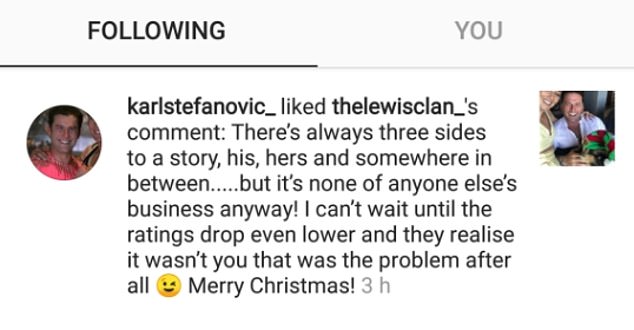 ‘It wasn’t you that was the problem after all’: On Thursday, Karl ‘liked’ this Instagram comment by a fan who predicted that Today’s ratings would plummet even further in his absence

Karl’s sacking came after his tumultuous personal life was blamed for the Today show’s dwindling ratings, which plunged to a 12-year low in September this year.

According to market research by Nine, female viewers turned on the longtime host after he separated from his wife-of-21-years Cassandra Thorburn in mid-2016.

His subsequent relationship with shoe designer Jasmine, who is nine years his junior, is understood to have accelerated the ratings decline.

‘Clearly, it’s been a tough and challenging year for Karl and Today,’ Hugh said.

‘No doubt the constant publicity surrounding issues with his personal life have had an impact on Karl, his colleagues and on the show. We can’t hide from that. And as a result we know there’s a lot of hard work to be done to win back the audience.’ 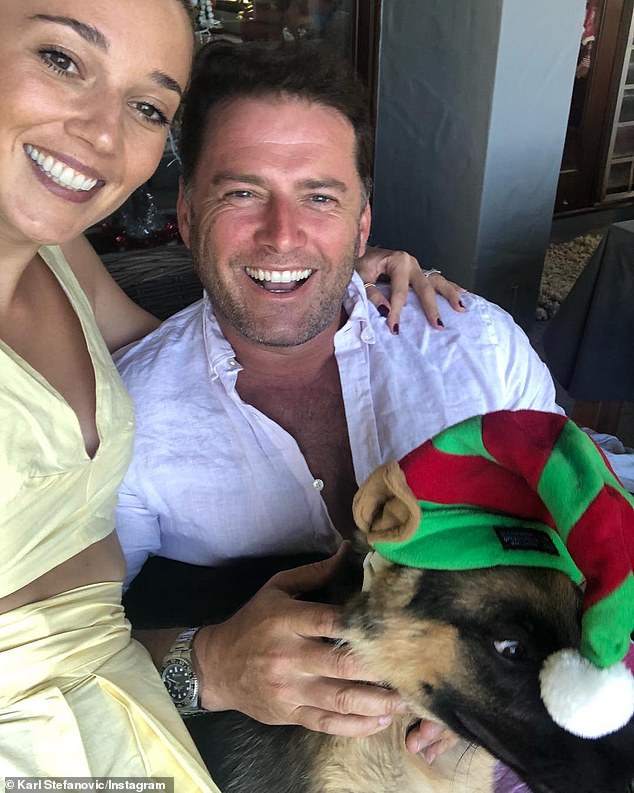 Merry Christmas? The fan’s comment was posted under this festive selfie of Karl, his new wife Jasmine and their dog Chance the Yapper, which was posted on Boxing Day 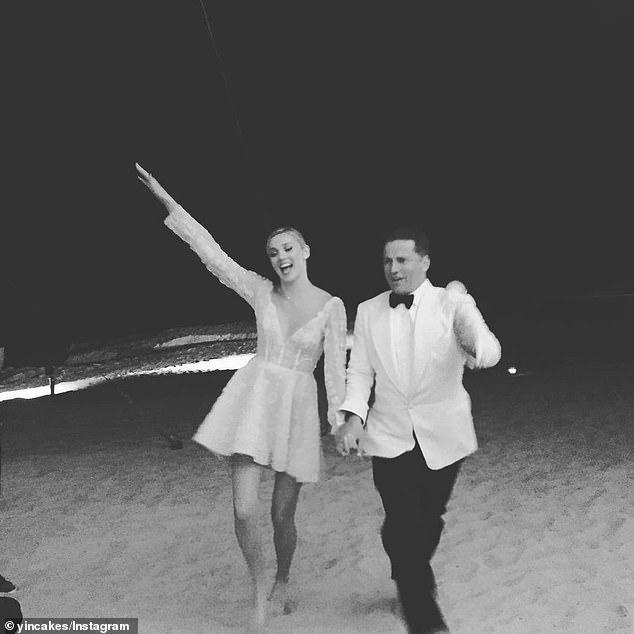 Backlash: Karl’s sacking came after his tumultuous personal life was blamed for the Today show’s dwindling ratings, which plunged to a 12-year low in September this year. He is pictured with Jasmine on their wedding day in Mexico on December 8

Karl’s Instagram ‘like’ came 48 hours after he unleashed a tirade of abuse at a paparazzo at Gold Cost Airport on Christmas Day.

‘Take your f**king camera and get out that f**king door, it’s f**king Christmas,’ he yelled in front of horrified onlookers, including children.

He then walked up to the photographer and raged: ‘It’s Christmas Day and you’re taking photos on Christmas Day.’ 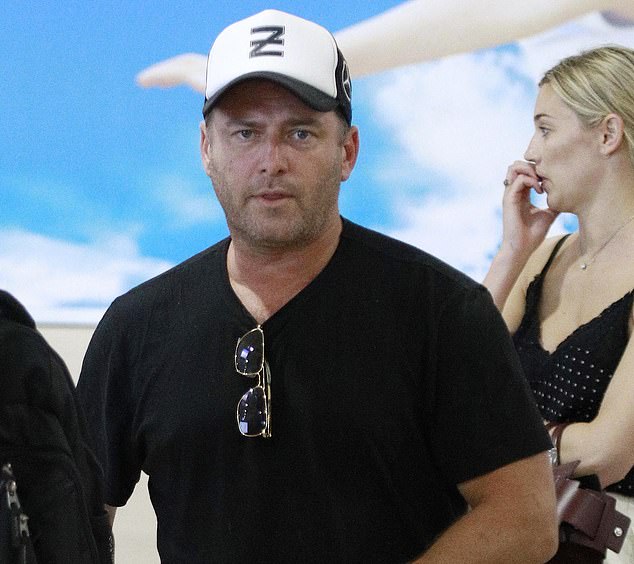 Outburst: Karl’s Instagram ‘like’ came 48 hours after he unleashed a tirade of abuse at a paparazzo at Gold Cost Airport on Christmas Day

He continued: ‘Why are you shaking? Have you got some disease, are you sick in the head? You got a s**t job? It’s Christmas Day. Go home!’

Meanwhile, Karl’s new wife Jasmine looked rather embarrassed by the whole scene as she waited for their luggage nearby.

The couple married in Mexico on December 8 and it was during their honeymoon in Aspen last week that Channel Nine made the decision to sack Karl from the Today show. 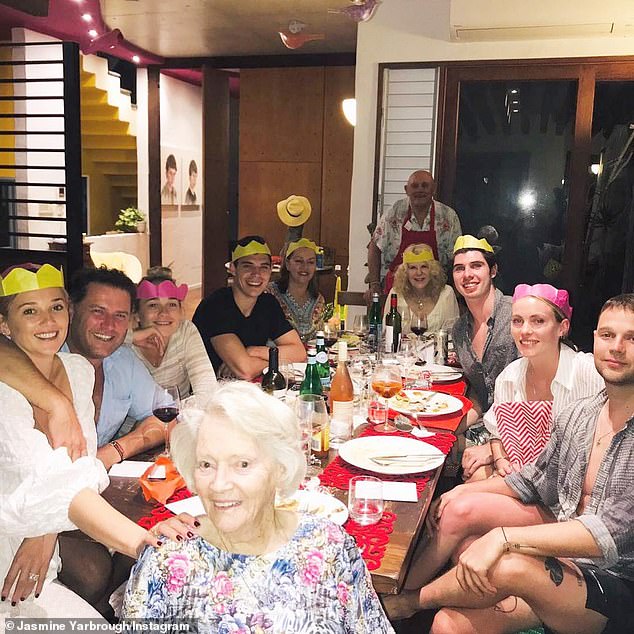 Still smiling! Despite the controversy surrounding his career, Karl still managed to smile through Christmas dinner with Jasmine (bottom left) and his wife’s family this week