Supermodel Karlie Kloss said ‘I do’ to Josh Kushner in a surprise ceremony earlier this month in upstate New York.

The model delighted her fans when she posted a picture of her magical first kiss with her groom Joshua Kushner to Instagram on Friday.

The couple walked down the aisle just three months after Kushner, 33, proposed to his girlfriend of six years, and for their big day kept the ceremony small and intimate.

Among the 80 guests were Kushner’s two sisters Dara and Nicole, his parents Charles and Seryl and big brother Jared, who arrived with wife Ivanka Trump and their three children – Arabella, Joseph and Theodore.

According to the Jewish Telegraphic Agency, the couple wed in a Jewish ceremony – Kloss reportedly converted in June before the couple became engaged.

Kloss, 26, was surrounded by her three sisters, Kimberly, Kariann and Kristine as well as their parents Tracy and Kurt. 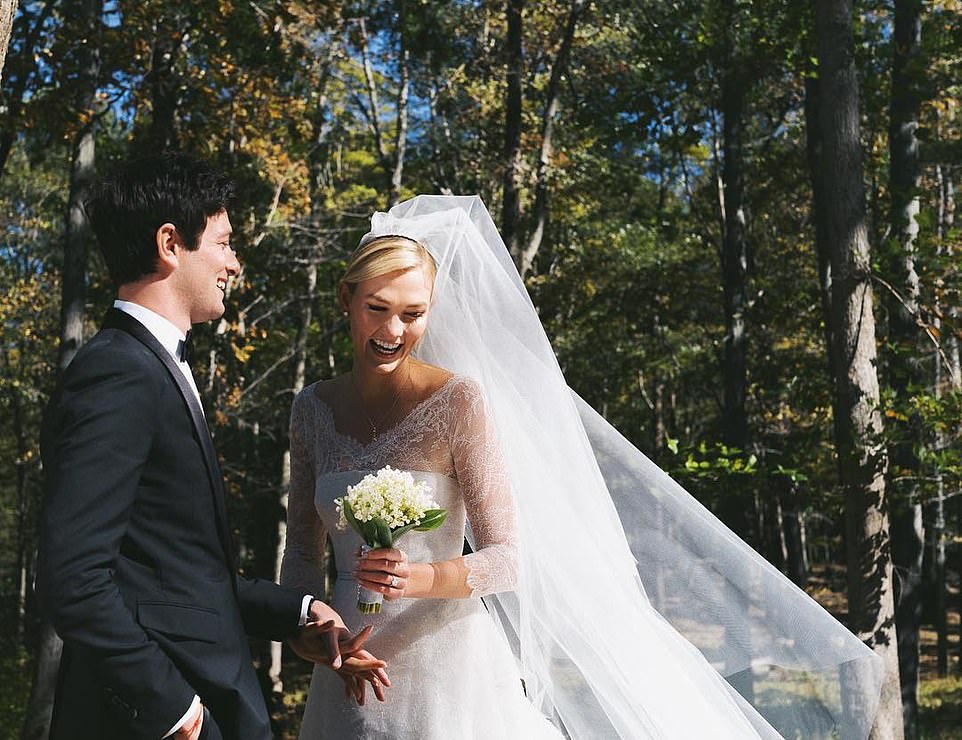 Karlie Kloss, 26, and Joshua Kushner, 33, married in an ‘intimate and moving’ ceremony in upstate New York Thursday and the couple was ‘beaming with happiness’

Her good friend Derek Blasberg also attended, and after the ceremony wrote: ‘I’m a bigger man for watching my little sister become a real wifey today.’

Many were quick to notice that best friend Taylor Swift was noticeably absent, with the singer performing in Australia on Friday to a sold out crowd in Melbourne. 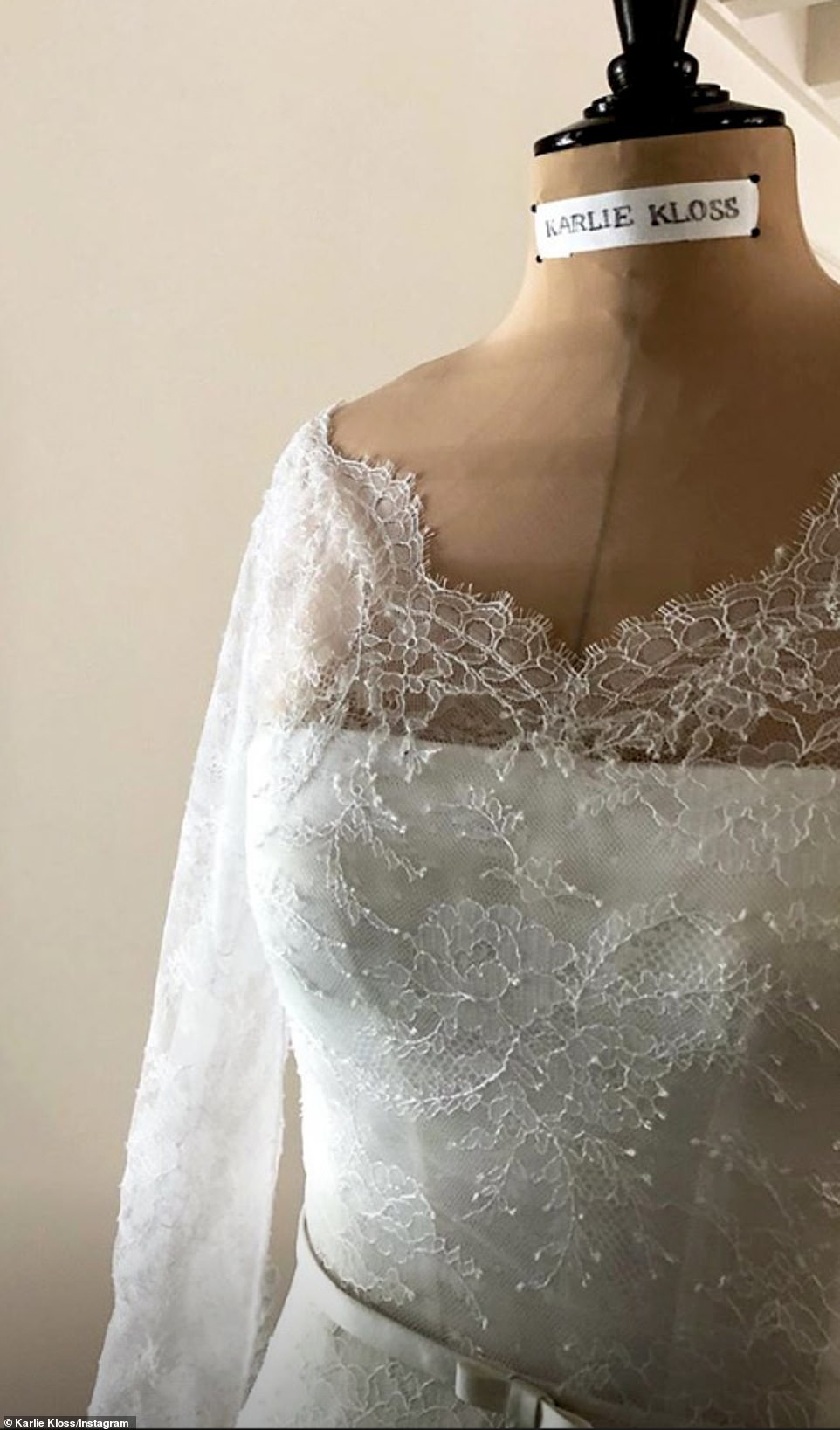 Gown of her dreams: An image of Kloss’ couture gown was posted on social media by one of the guests on Friday (above) 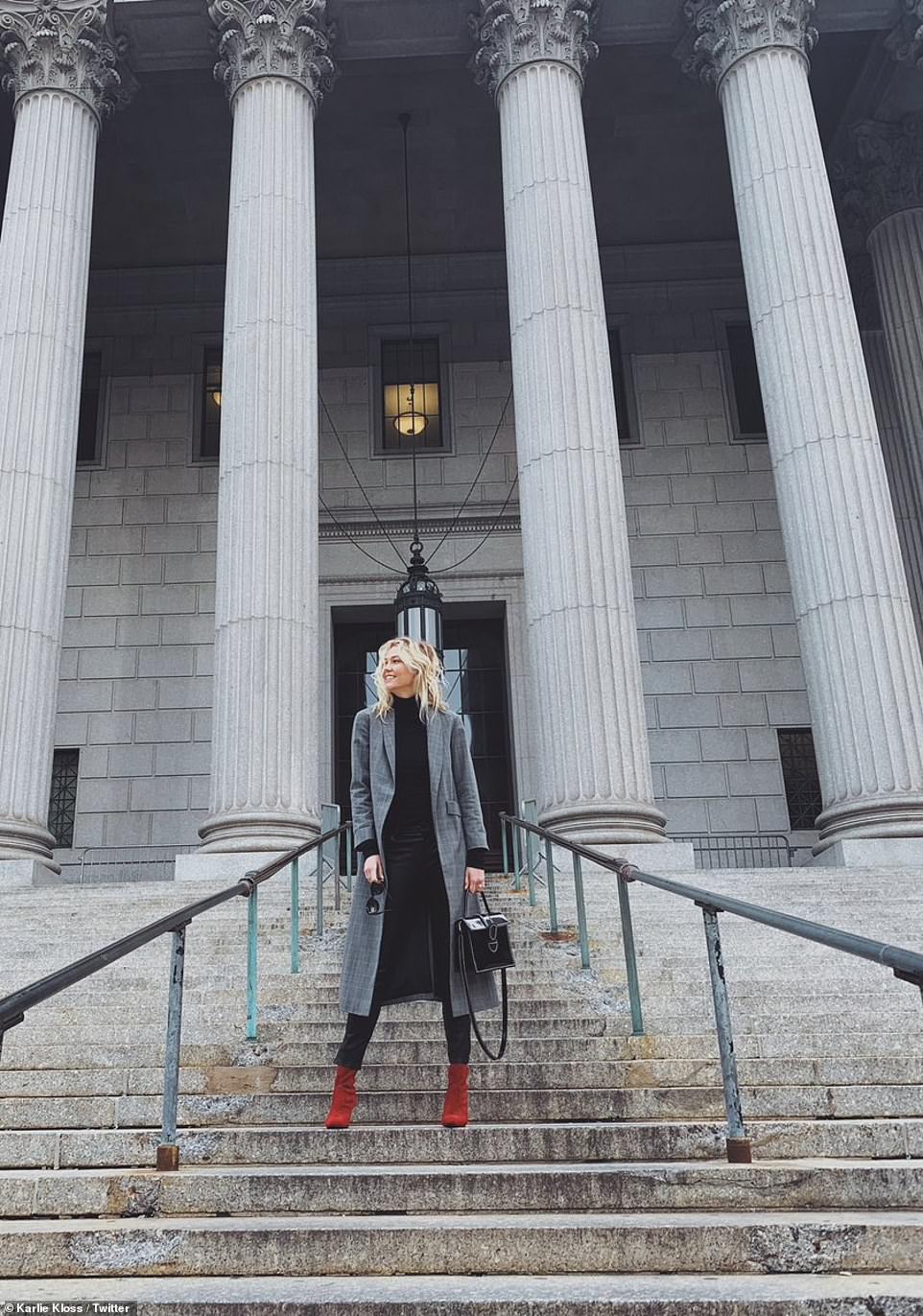 Sneaky supermodel: Earlier this week she shared a snap outside New York City Hall claiming she was on jury duty

Kloss was the first one to break the news, posting an image from the ceremony on her Instagram account.

That photo showed Kushner in a tuxedo and Kloss in a stunning couture creation from Dior.

The couple, who are notoriously private, have been dating since 2012, and refuse to even pose together at most events.

It was not until 2015 that Josh was even spotted out at an event with Karlie when the two attended at the Met Gala.

Even then, Kushner did not walk the carpet with Kloss, choosing instead to let his girlfriend pose for the photographers while he ran inside.

The supermodel has also made it clear that the details of her private life are not something that she will be sharing with fans now or in the future.

‘It’s not like I’ve ever wanted to be so secretive about my private life,’ she recently said in an interview with Porter.

‘Carolina Herrera always says, “A woman who’s an open book is boring.” There’s no mystery anymore. I know in my life what really matters to me. I’m not trying to hide that from the world; I just really like having a more private private life.’ She then added: ‘I’ve got nothing to hide, though!’

The two do however post occasional photos of their travels to places like Iceland and Italy, where just this summer they spent a few weeks on David Geffen’s yacht and Barry Diller’s schooner.

DailyMail.com also revealed earlier this year that the couple enjoyed a vacation in Jordan alongside Crown Prince Hussein and headed down to Washington DC to participate in the March For Our Lives back in March. 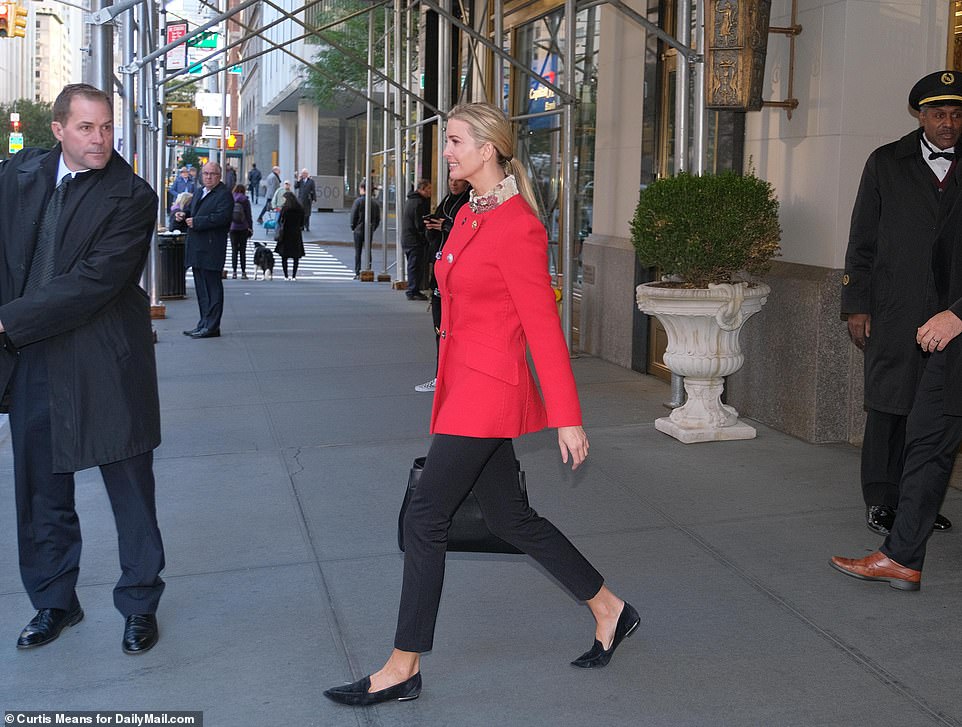 On the way: Ivanka Trump was seen leaving her New York City apartment on Thursday ahead of the wedding (above) 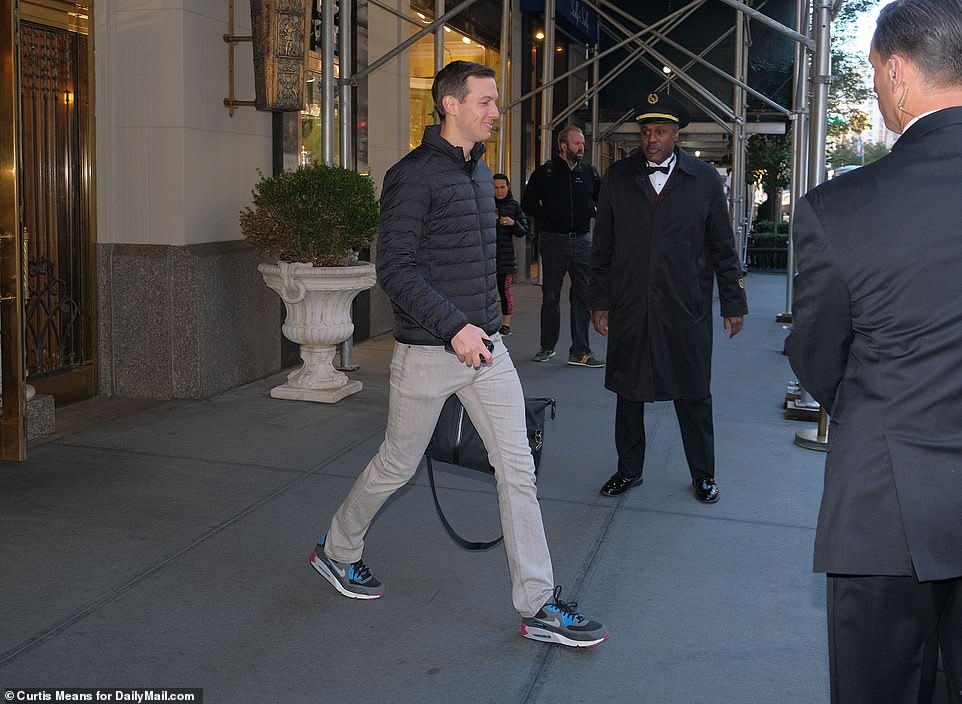 J-dog: Jared was dressed down in jeans as he made his way to the ceremony on Thursday (above) 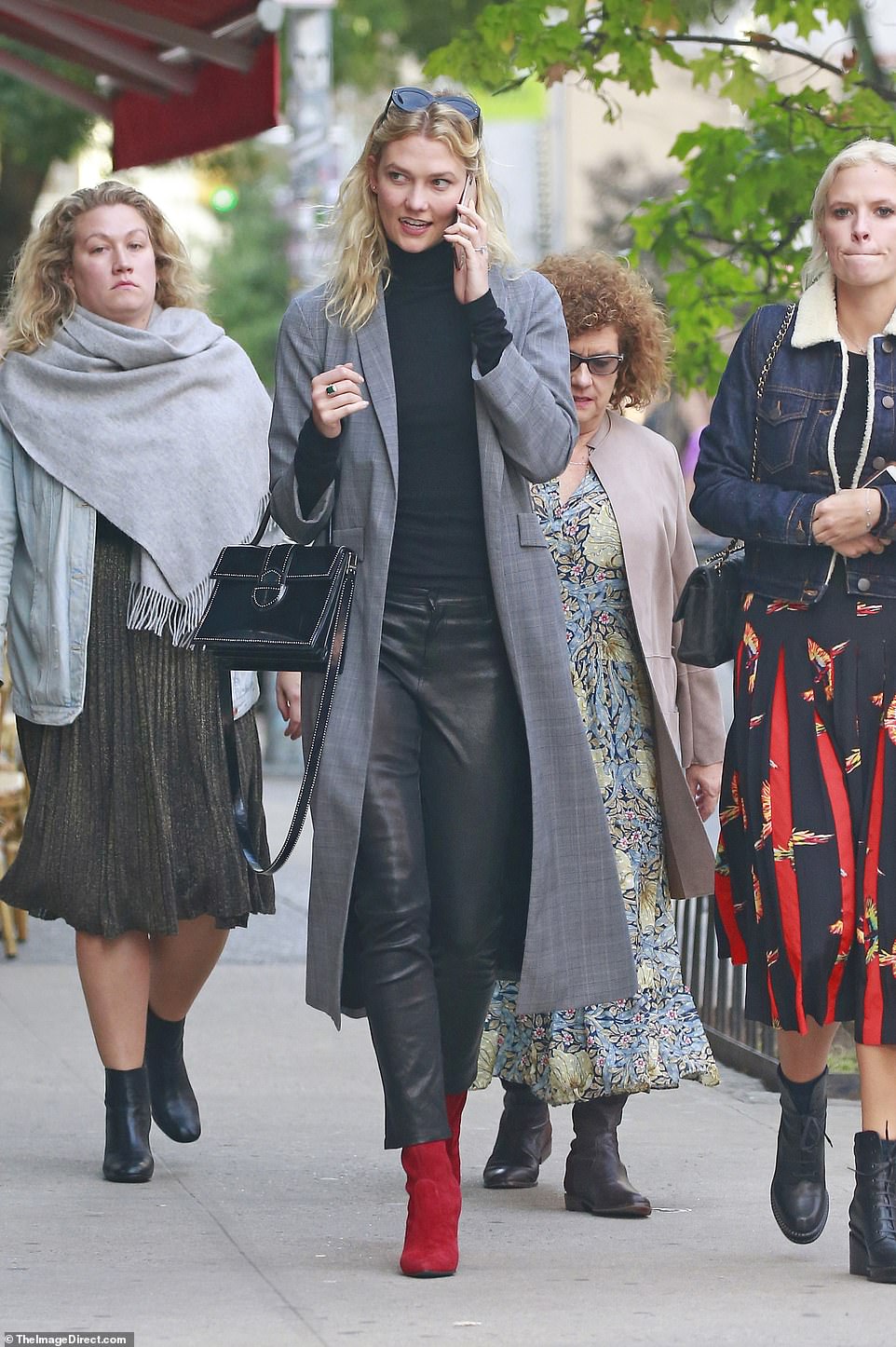 The girls: Kloss is seen on Tuesday with her sisters Kariann and Kimberly as well as mom Tracy near her home in New York City (above) 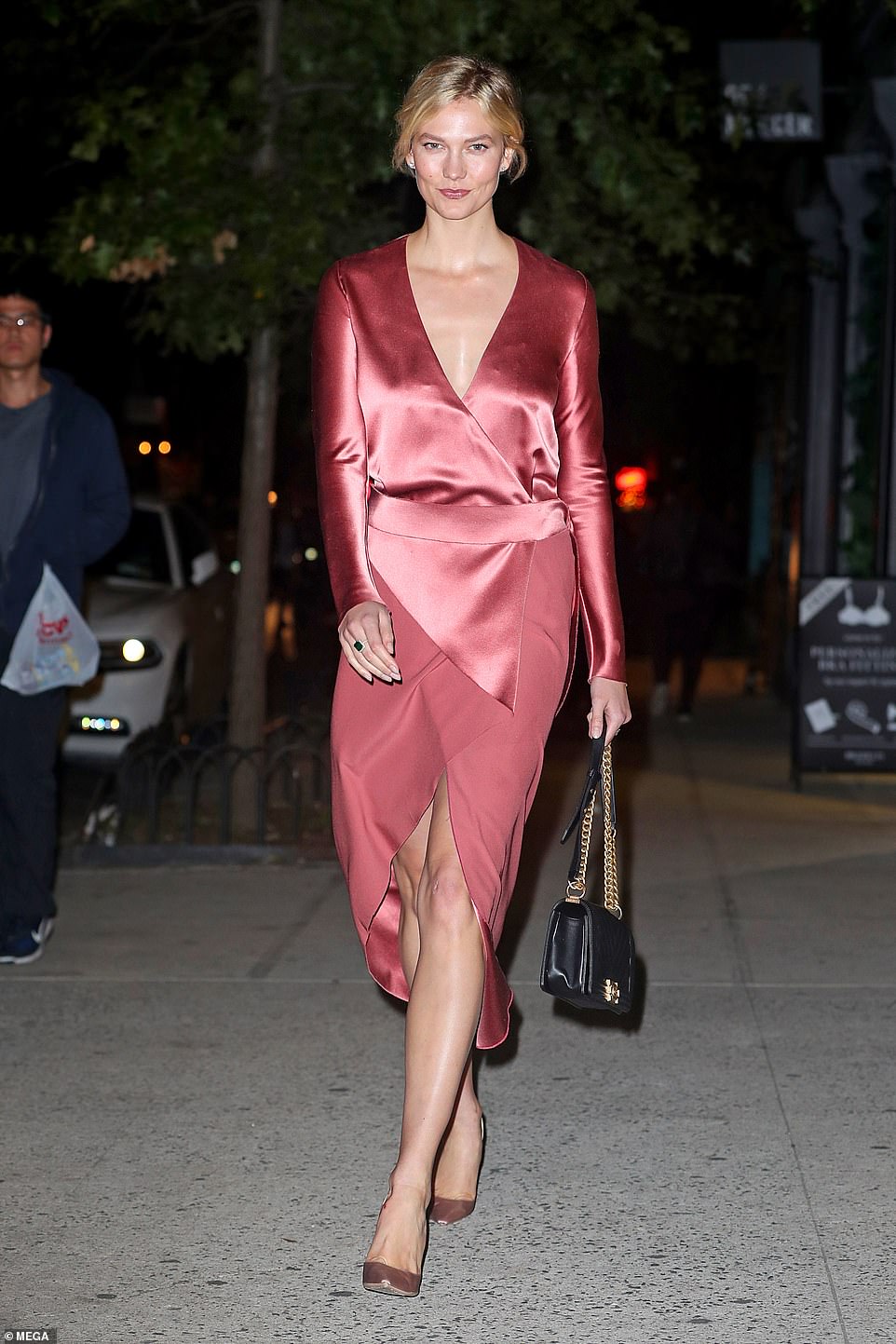 Last night as a single lady: Kloss went out with her now-husband on Wednesday night in a stunning dress from designer Dion Lee (above)

In the days before the wedding, Kloss was seen spending time with her sisters as she ran around Manhattan.

She also posted a photo of herself heading to jury duty in Manhattan on Tuesday, though some believe she may have in fact been going to get her marriage license.

The night before her wedding, Kloss was seen stepping out in a stunning pink creation from Dion Lee while Kushner stayed in playing old-school Nintendo games.

There were hints that a wedding might be in the works after Ivanka and Jared flew to New York on Tuesday night.

Then, on Thursday, DailyMail.com spotted the pair wexiting their Park Avenue pad and meeting up with their three children.

The group then headed upstate, where both Kushner and Kloss own property.

Swift was not the only one of Kloss’ famous pals who was noticeably absent, with even her closest models friends including Jourdan Dunn, Toni Garn and Cara Delevingne not making the cut. 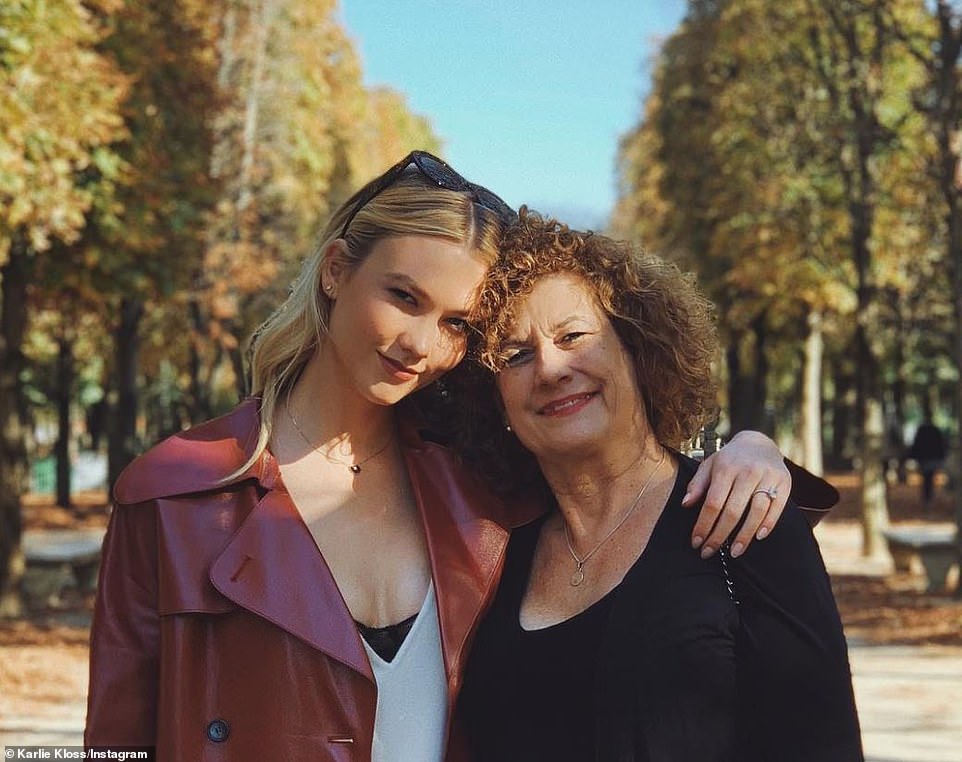 Mom and daughter: Kloss took her mother Tracy with her to Paris when she went to try on her wedding gown at Dio last month (pair above in paris) 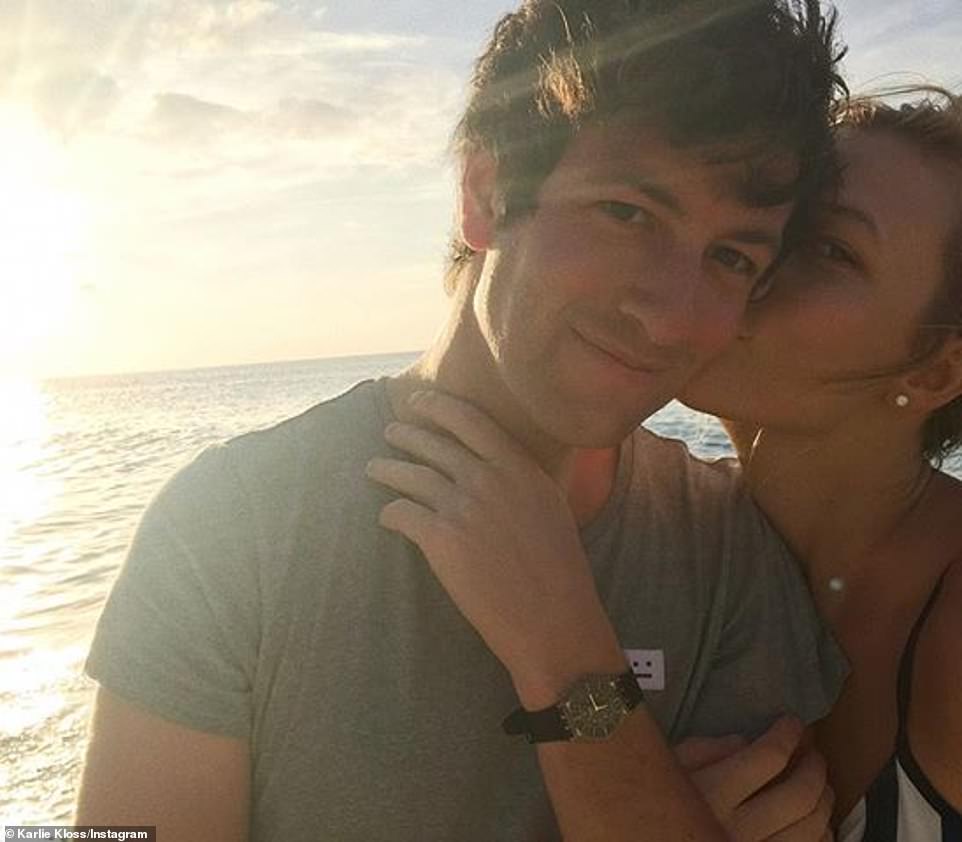 Put a ring on it: Like her wedding, Kloss announced that she was engaged on social media (above) 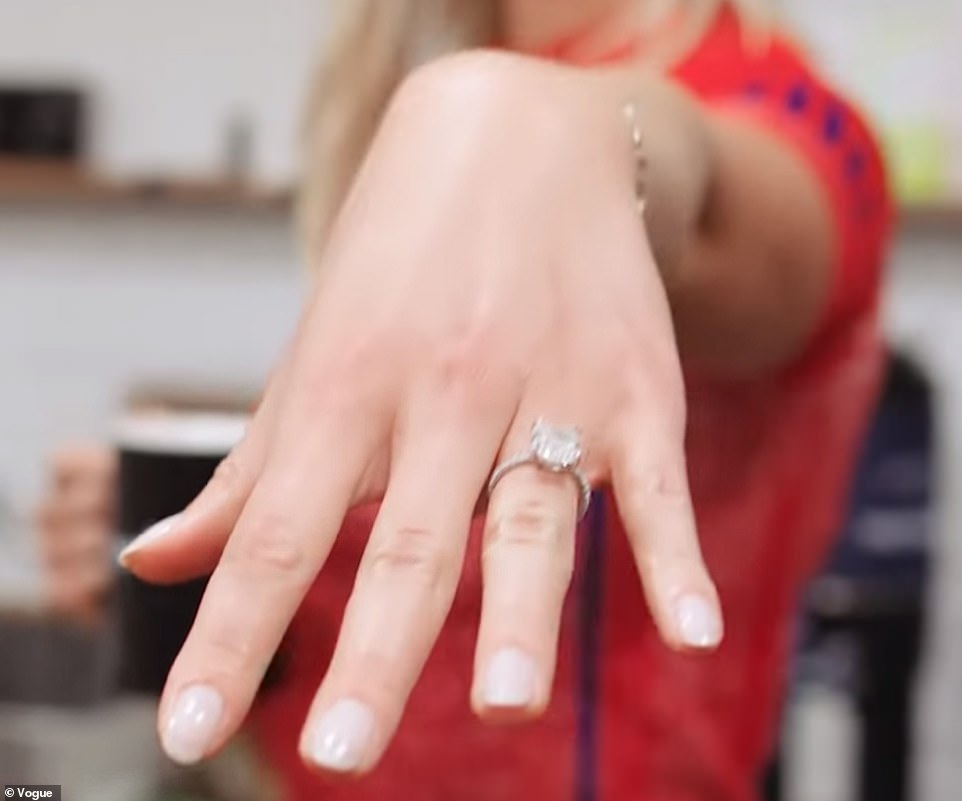 The bling ring: Kloss showed off her engagement ring to Vogue as she briefly discussed her connections to the American president via her partner Joshua

Ever since she announced her engagement, there has been much speculation about who might dress Kloss, who has closed many a show in the house’s bridal look over the course of her career.

In the end, Dior won out over the likes of Jason Wu and Wes Gordon.

Kloss has a long history with the house, and was just 16 when she was cast by then-creative director John Galliano to open his Paris show.

That was followed by the one-woman campaign in 2010 which launched her to supermodel-stardom.

Gushing about a 17-year-old Kloss after they shot that campaign in 2010, Galliano said: ‘Karlie Kloss smoldered with the same intensity and wide-eyed look as a young Lauren Bacall. I love the smoky, sophisticated atmosphere of the image. This feels very right for now — escapist and sensual… You can start a whole script just by staring into her eyes.’

Their collaboration didn’t stop there, and Kloss remained Galliano’s muse until he was fired in 2011 following an anti-Semitic rant that was caught on tape

Kloss has also said that a Dior bag gifted to her by Galliano is her dearest possession.

‘He gave it to me after we shot my first campaign with Steven Meisel, and I cried when I opened it. It is the most beautiful, timeless Dior bag. It is such a special reminder of that time in my career; someday I will give it to my daughter,’ she told Vogue in 2012.

The two have not worked together of recent, and it was the house’s current designer who made the dress Kloss wore in perhaps her last piece for the brand.

Maria Grazia Churi announced earlier this year that she will leave Dior, where she became creative director two years ago after a successful stint at Valentino.

Kloss took her mom with her to Paris for the final fitting of that dress, which occured during fashion week. 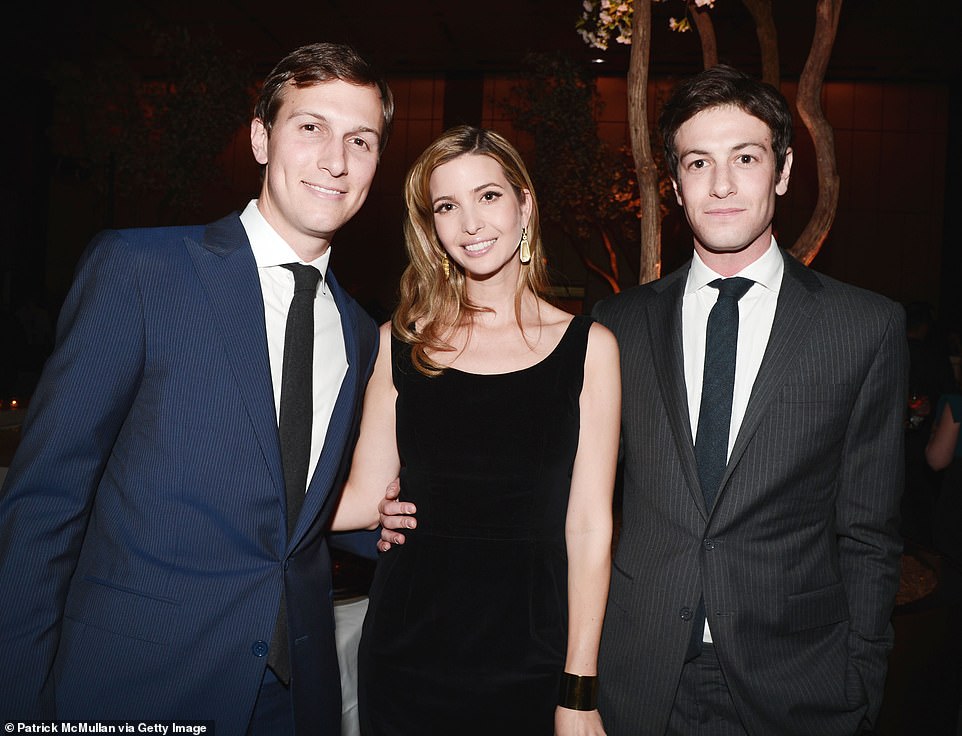 Family: Joshua, who is a ‘lifelong Democrat,’ is the younger brother of White House senior adviser Jared Kusnher, who is married to first daughter Ivanka Trump (pictured in 2013) 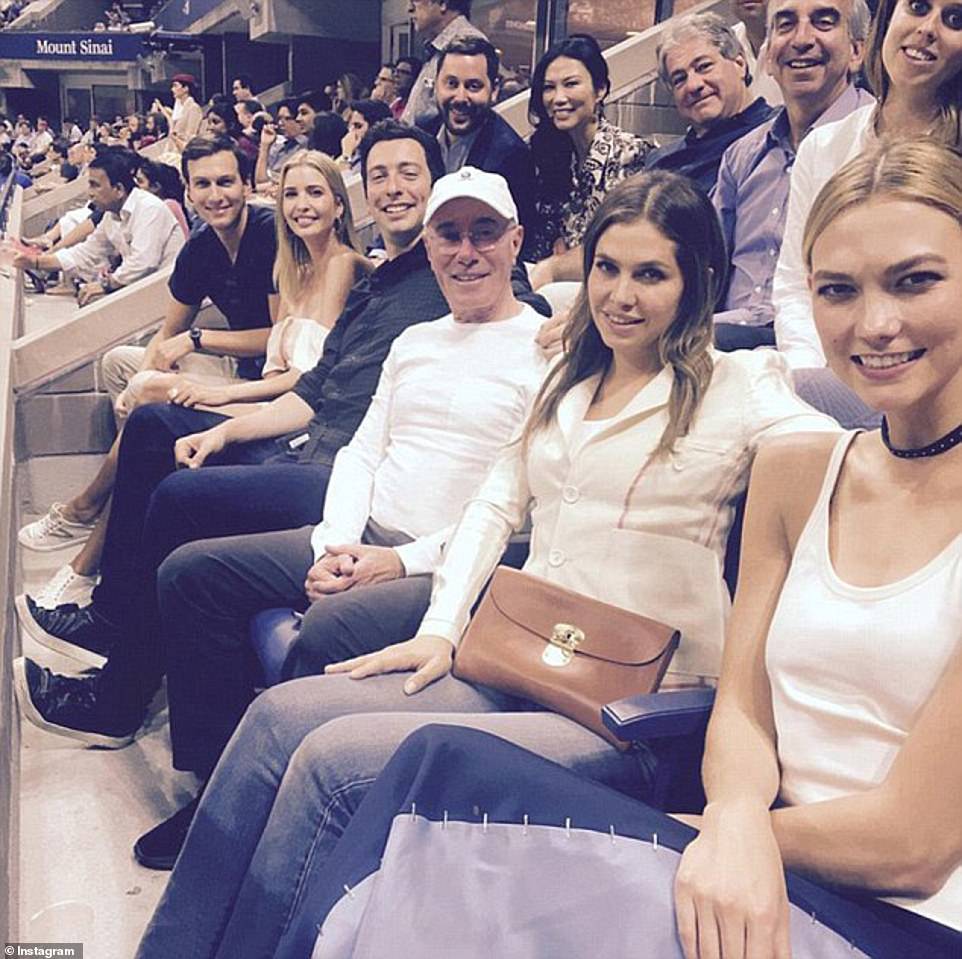 Siblings-in-law: Karlie and Joshua have not made a public appearance together with Jared and Ivanka. The model attended the US Open with the couple in 2016, but Joshua was not present 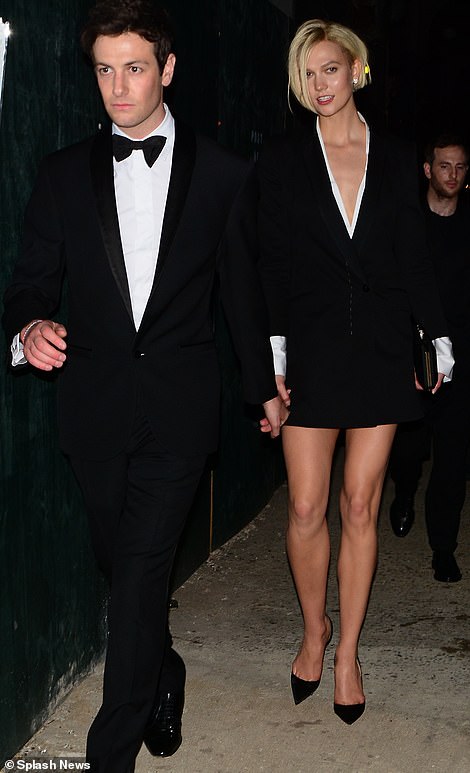 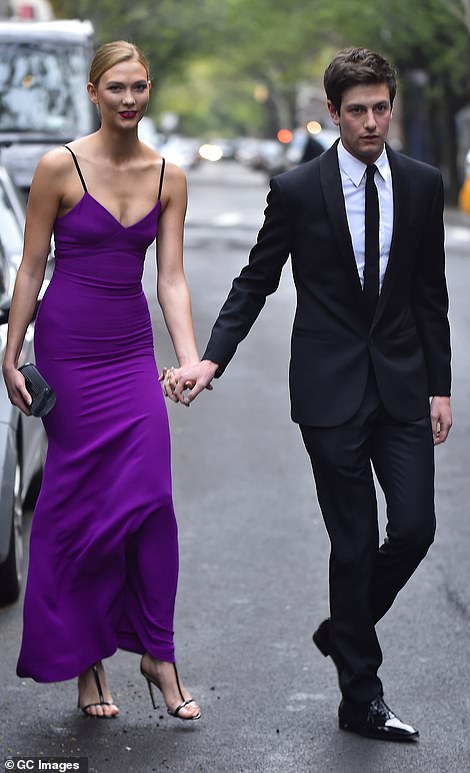 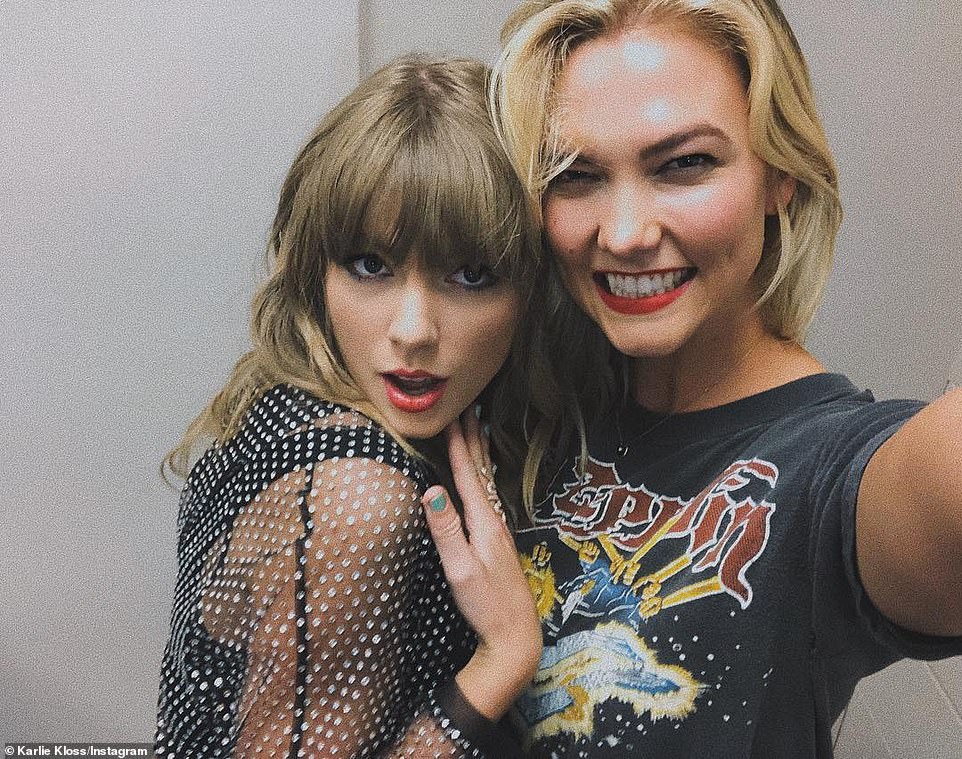 Kloss has a close relationship with the entire Kushner family, despite the fact that her and her new husband do not share the same political views as Ivanka and Jared.

And Kloss, like Ivanka, is reported to have converted to Judaism ahead of the ceremony.

Ivanka is particularly close with Josh as he manages her trust while she works for her father in the White House.

That trust, which was revealed to be worth approximately $50million in White House documents released last year, is controlled by not only Josh but also Ivanka’s sister-in-law Nicole Meyer.

Jared’s brother Josh and sister Nicole may in fact be family, and as a result more accessible to Ivanka, but there is no question that the two were a logical choice to manage a trust.

Josh is the owner of the venture capital firm Thrive, who were one of the first to invest in Instagram.

He attended undergrad at Harvard, like his brother Jared, and stayed in Cambridge to attend business school at the Ivy League university as well, graduating in 2011.

The real estate scion, who was raised in New Jersey, took a job at Goldman Sachs after school before heading off on his own with Thrive.

Thrive closed its fifth fund in 2016 for $700 million, pushing the total amount managed by the group at the time to approximately $1.3 billion.

He is also the co-founder of Oscar Health and was a Hillary Clinton supporter in the election.

Nicole is a principal at Kushner properties (as is Josh) and her husband Joseph is the chief executive of Observer Media.

There is a fourth Kushner sibling, Dara, who lives with her family in New Jersey near the home where she grew up with her brother Jared.