The Duchess of Cambridge and the Duchess of Sussex were all smiles today as they joined the Queen at church in Sandringham for the Christmas Day service.

Prince William, 36, and Harry, 34, joined their wives as they put on a united front amid rumours of a ‘rift’ and mounting tensions between the two couples.

Hundreds of well-wishers turned out to see the royal family, but the Duke of Edinburgh and the Duchess of Cornwall were missing.

Kate, 36, and Meghan, 37, were greeted by adoring crowds as they made their way to St Mary Magdalene Church, a short walk from Sandringham House on the Royal Family’s Norfolk estate, alongside their husbands Prince William and Harry and Prince Charles 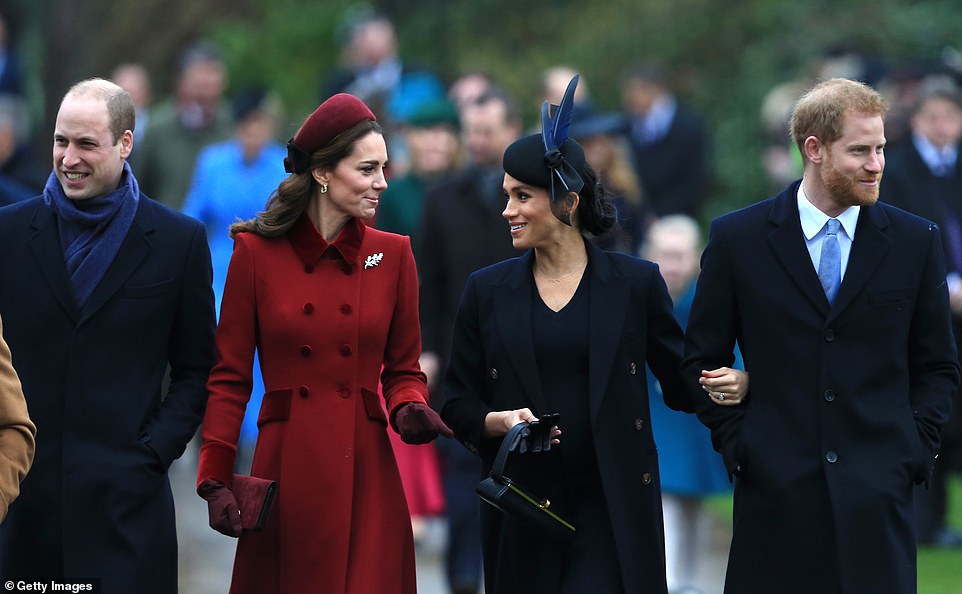 Kate and Meghan chatted to one another as they walked to the church this morning, alongside husbands Prince Harry and Prince William 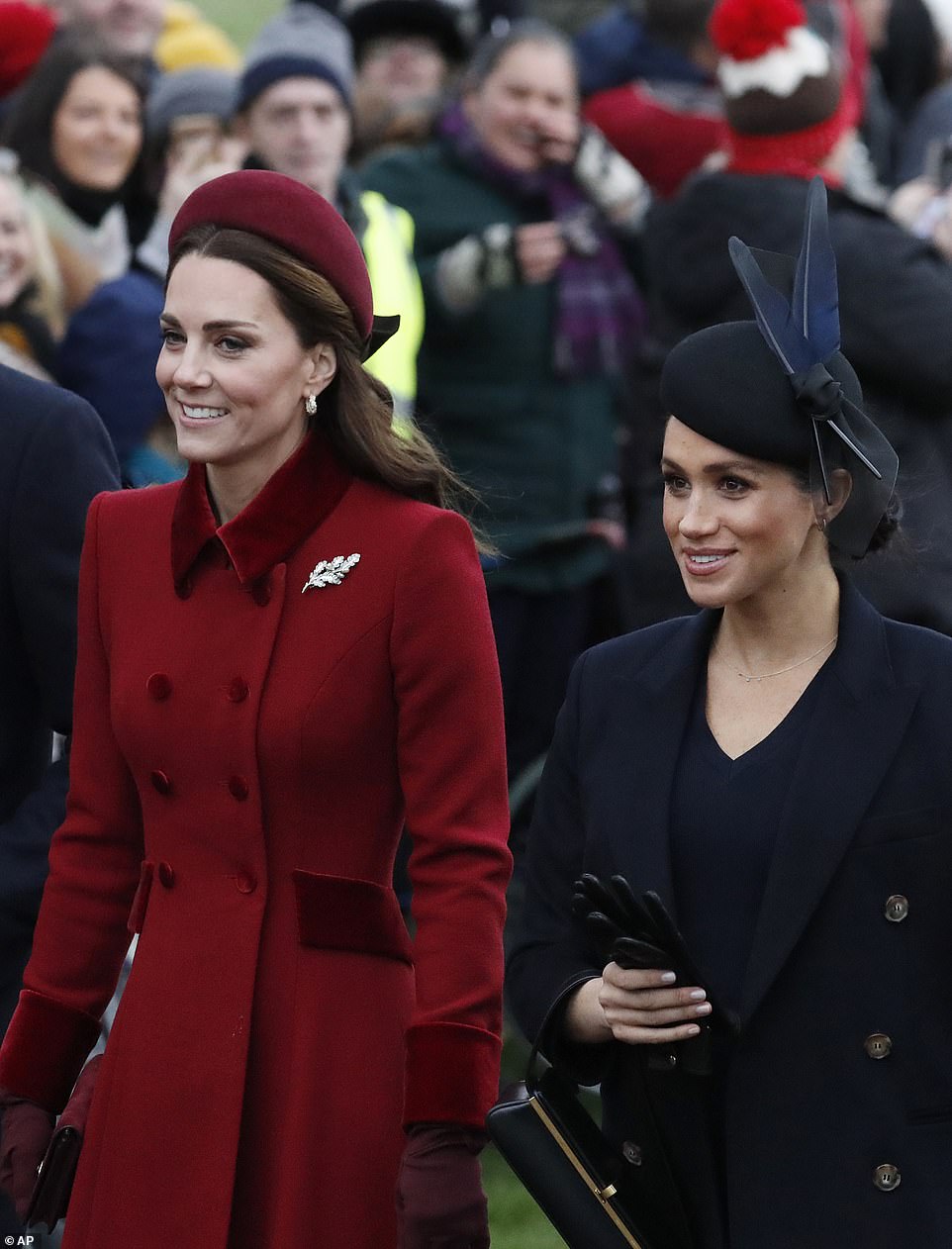 Kate and Meghan both appeared happy and relaxed as they walked to the church this morning. Kate wore a bright red coat, alongside Meghan, who chose a black outfit 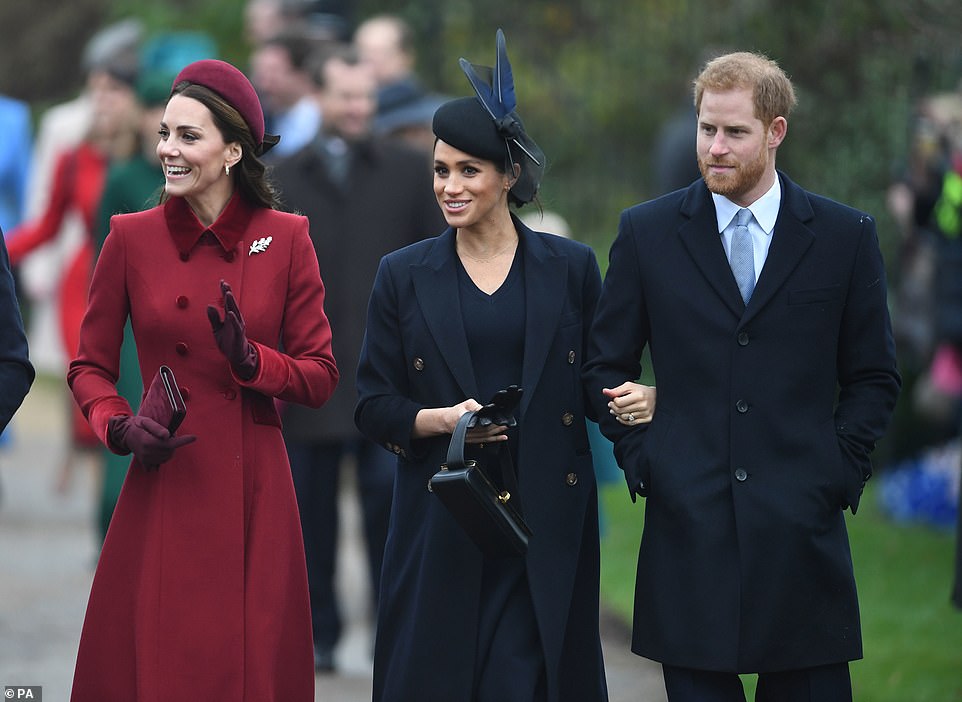 Meghan held her gloves in her hand and smiled as she linked arms with Prince Harry. Kate waved at wellwishers who had come out to see them on Christmas morning 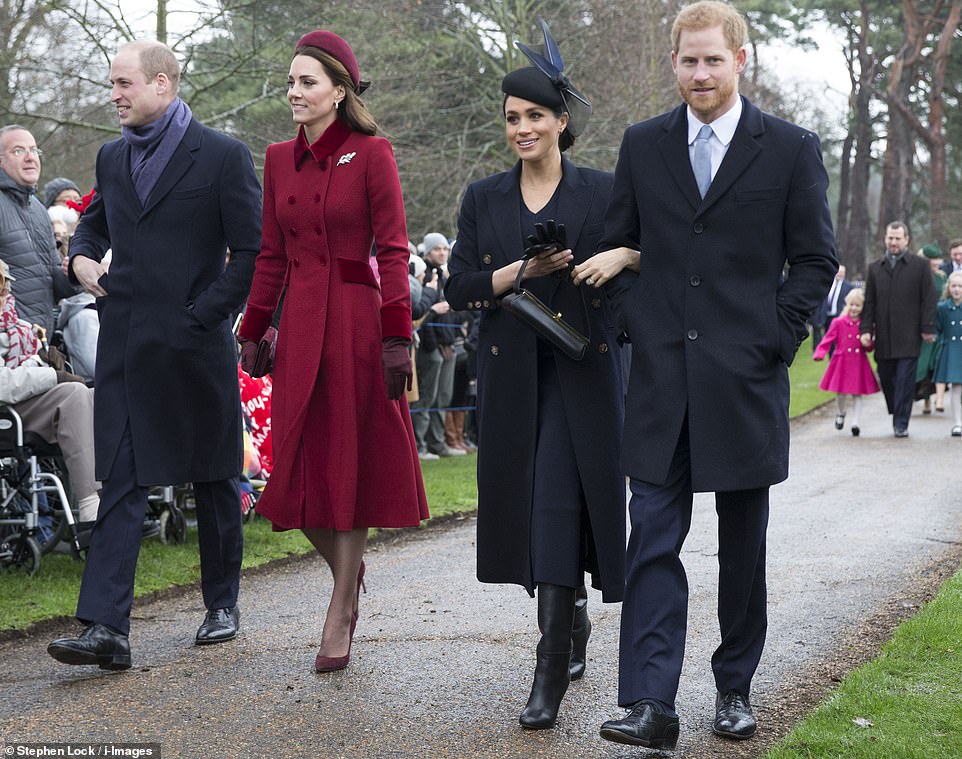 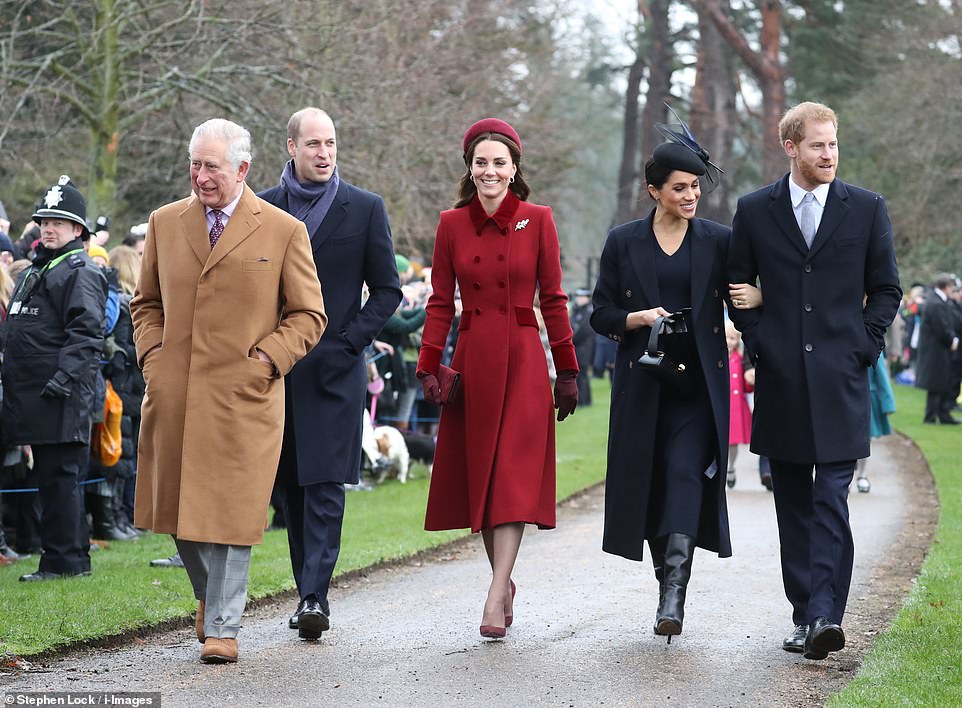 Prince William, 36, and Harry, 34, joined their wives and the rest of the Royal Family as they put on a united front amid rumours of a ‘rift’ and mounting tensions between the two couples

Royal fans wait at the church each year to get a glimpse of the family to start their Christmas festivities.  Many had brought bouquets of flowers or had got in the Christmas spirit by wearing Santa hats.

Poised with her camera phone in the  crowds was Karen Anvil, 40, from Watlington, Norfolk, who snapped the Royals smiling as they left church last Christmas Day.

She said the photo had been like a lottery win after she posted it on social media before a professional photographer at the church put her in touch with his agent.

She said by 5pm the same day, the picture had gone viral and it has since been sold to at least 50 countries.

Sales of the photograph have enabled her take a year off work, clear debts and pay for a house revamp. 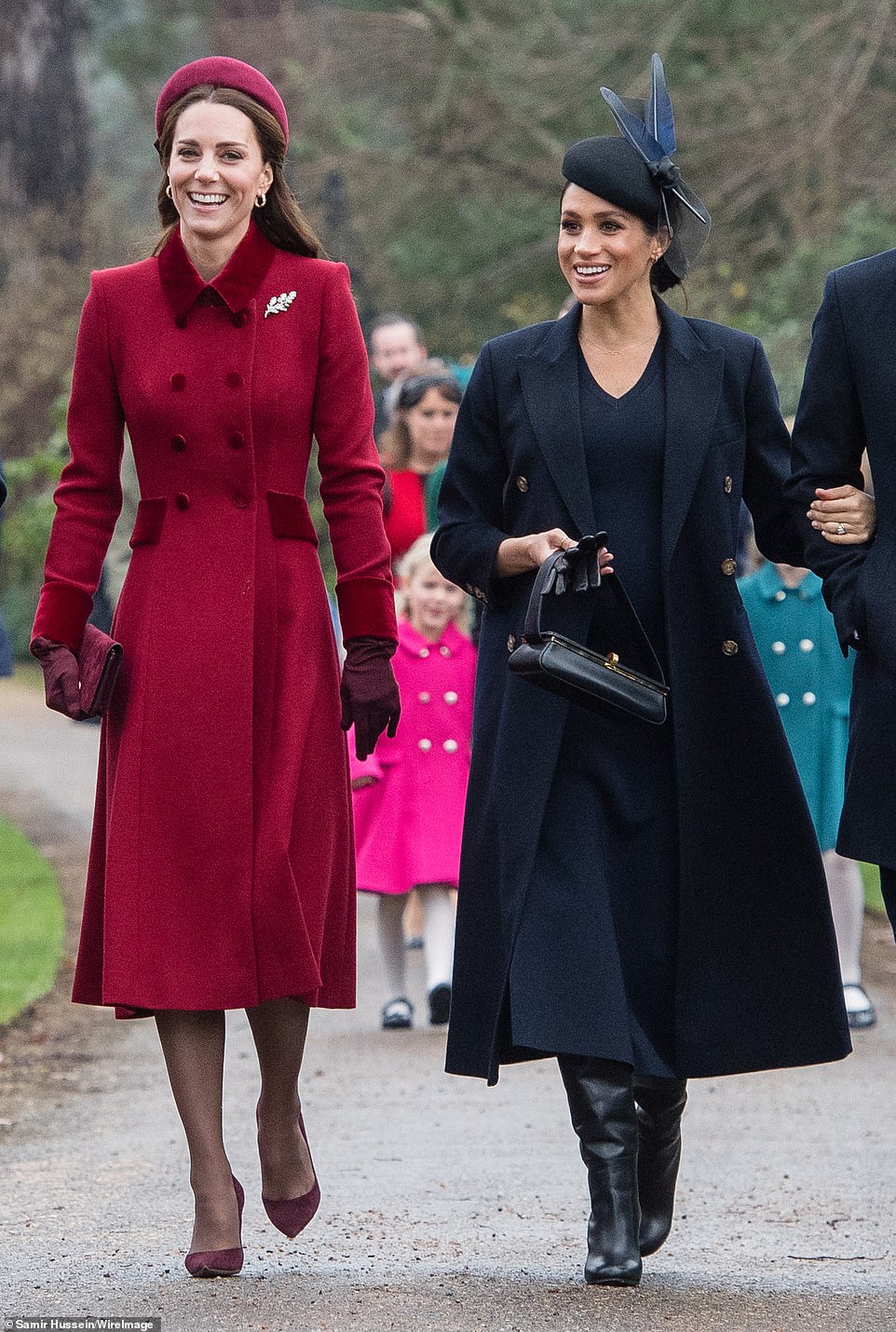 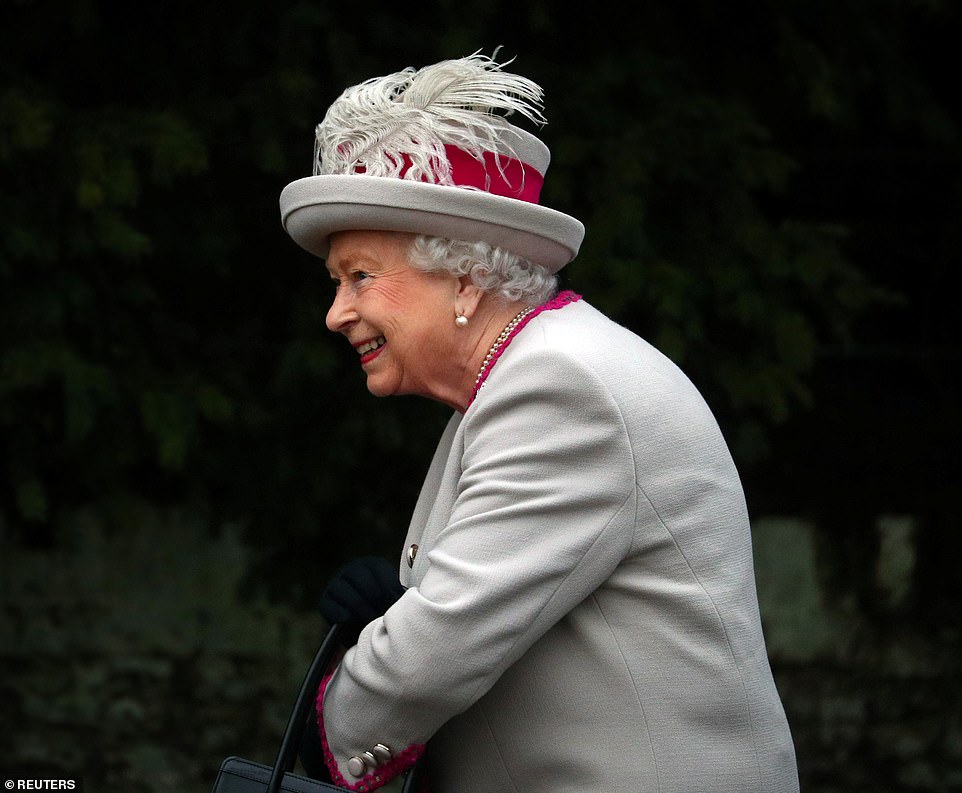 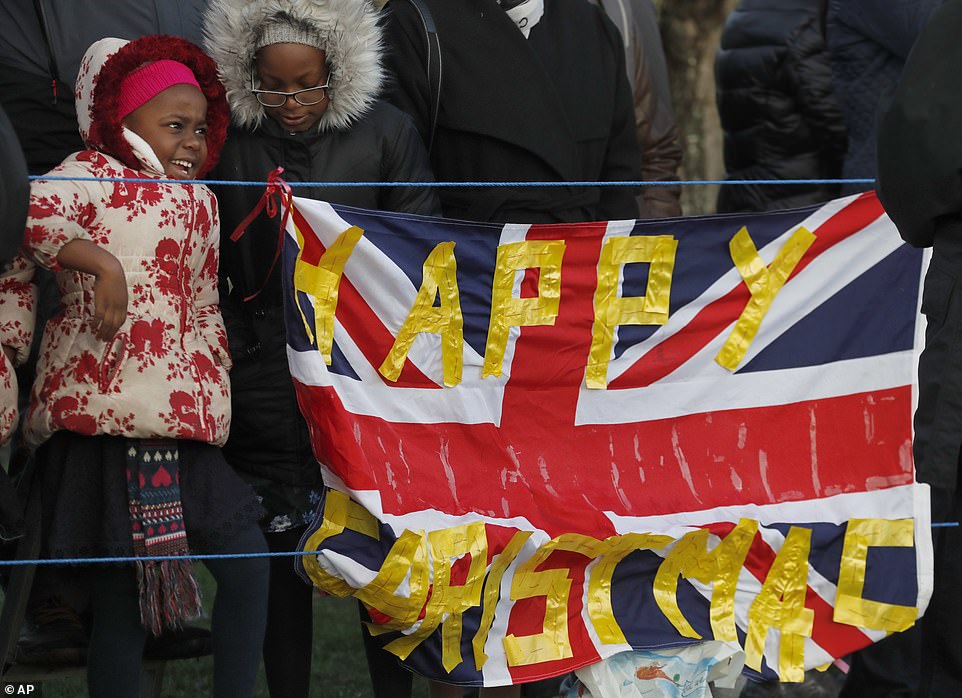 This year the Duchess of Sussex is enjoying her first Christmas as a member of the royal family.

But the American former actress is in the rare position of already having spent December 25 with the Windsors.

She became the first non-married partner invited to Christmas lunch at Sandringham with the Queen in 2017.

Now an HRH and a duchess, the ex-Suits star is seven months into her royal life, and due to give birth to a royal baby in the spring. 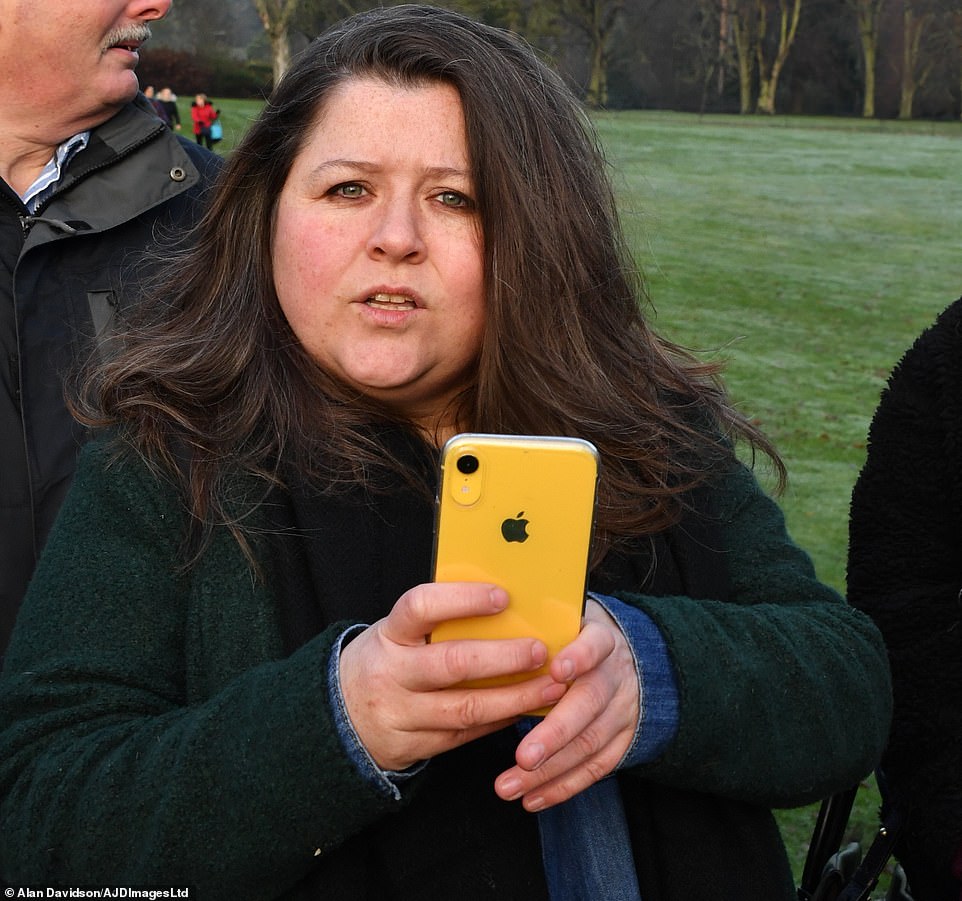 Poised with her camera phone in the crowds was Karen Anvil, 40, from Watlington, Norfolk, who snapped the Royals smiling as they left church last Christmas Day

The traditions followed by the royal family at Christmas are a little different from many households in the UK.

While most people across the country open their presents on Christmas Day, the royal family still keep to the German practice of opening their gifts on Christmas Eve.

Known as Heiligabend Bescherung (which translates as Christmas Eve exchanging presents), the tradition was popularised by Queen Victoria and Prince Albert.

The Queen, the Duke of Edinburgh and other royals usually congregate in the White Drawing Room at Sandringham House the day before Christmas to put the finishing touches to a 20ft (6m) tree cut from the estate. 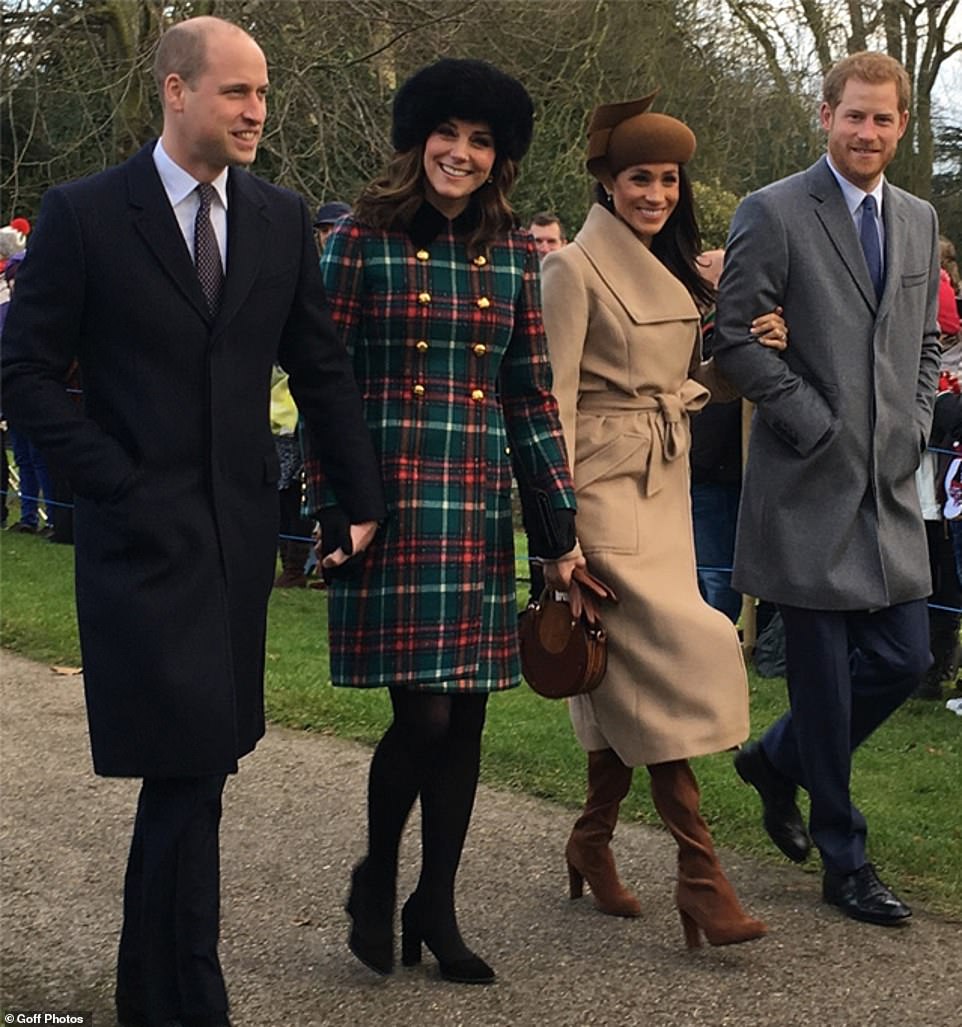 The photo taken by Ms Anvil last year showed the royals smiling as they left church. She said it was like a ‘lottery win’  win after she posted it on social media before a professional photographer at the church put her in touch with his agent

Presents are placed on a white linen-covered trestle table, with cards marking exactly where the piles of gifts should be put.

The Queen likes practical presents, but not overly extravagant ones, and the royals also reportedly like to exchange joke or non-costly quirky gifts.

Kate revealed that she was left stumped over what to buy the monarch for Christmas during her first stay at Sandringham.

‘I thought back to what would I give my own grandparents. And I thought ‘I’ll make her something.’ Which could have gone horribly wrong,’ the duchess said.

‘But I decided to make my granny’s recipe of chutney. I was slightly worried about it, but I noticed the next day that it was on the table.’

Diana, Princess of Wales, once fell foul of the royal rules on present-giving, apparently buying cashmere sweaters as her first festive royal presents, and getting joke gifts such as a loo-roll holder in return.

At 5pm, guests enjoy tea, scones, sandwiches and cakes from sideboards in the Saloon.

Afterwards, they dress for dinner, with the men in black tie and the women in evening gowns, with the table set with the finest china.

Sarah, Duchess of York, once described the royal Christmas as ‘exhausting’, having changed outfits seven times in 24 hours.

Sometime after 10pm, on a signal from the Queen, the dorgis are led out and the ladies adjourn, leaving the Duke of Edinburgh to serve port or brandy to the men.

On Christmas Day, the royals awake to find stockings filled with small gifts and fruit at the foot of their beds.

After the morning service at the Church of St Mary Magdalene on the royal estate is a traditional event where they greet well-wishers.

Back at the house, lunch is prepared by their staff and served at 1pm, and the royals indulge in a giant turkey, reared at Sandringham.

They then settle down to watch the Queen’s Christmas Speech.

The Queen sometimes quietly leaves the room and lets her family watch the national address by themselves, as she views it alone to see how it comes across.

Boxing Day, when the royals enjoy a breakfast buffet of kedgeree, bacon and eggs, often involves outdoor pursuits such as shooting, riding and walking.