Kate Garraway has shared an update on her husband Derek Draper’s condition as he continues to battle coronavirus.

The Good Morning Britain presenter revealed in an emotional Instagram post that he is still fighting the deadly disease.

She said: ‘He is still critically ill in intensive care, but where there is life there is hope.’

Fighting for his life: Kate Garraway revealed her husband Derek is critically ill as he continues to battle coronavirus (the couple pictured in December 2019)

Kate, 52, also paid tribute to NHS staff as she posted a video of her family applauding the carers outside her home.

She said: ‘Another emotional #clapforcarers & never has it been more needed. If this pandemic #lockdown is dragging on for us, imagine what it is like for them.

‘Shift after endlessly long shift , bravely going to work, to battle the virus and give our loved ones a chance. 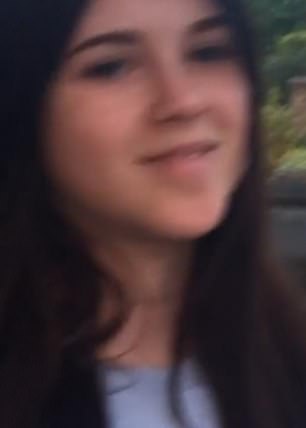 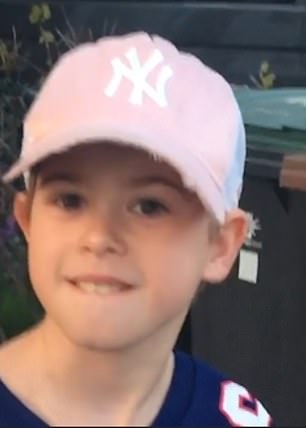 Showing thanks: Kate’s daughter Darcey, 14, and son William, 10, joined her to applaud the work of the NHS on Thursday evening 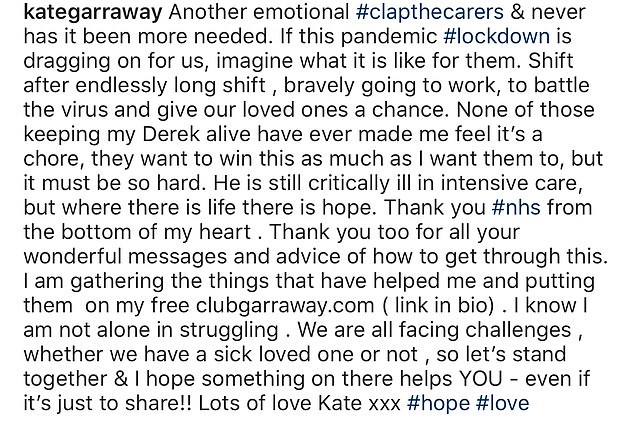 Emotional: The TV personality showered praise on the NHS for caring for her husband and thousands others across the country

‘None of those keeping my Derek alive have ever made me feel it’s a chore, they want to win this as much as I want them to, but it must be so hard.’

She had previously praised NHS workers for ‘keeping her husband alive’ during the pandemic, and also thanked her neighbours for their own kind gestures, which included delivering meals for her family.

Kate took to Instagram last week to share a video of the fireworks set off by her neighbours in honour of NHS staff, as the nation came together once again to ‘Clap For Carers.’ 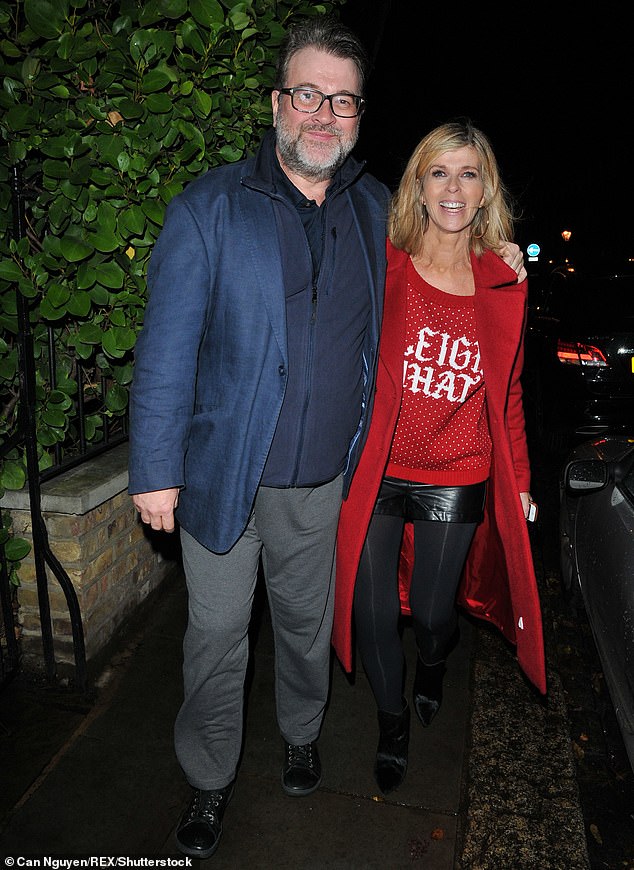 Grateful: The Good Morning Britain presenter praised the NHS in the emotional tribute

The star – who has daughter Darcey, 14, and son William, 10 – explained her husband was still battling the deadly virus COVID-19, and also praised neighbours for their own offers of help.

She wrote: ‘From the bottom of my heart a billion thank yous to the extraordinary #nhsworkers whose skills, dedication and downright guts in the face of so much personal risk, are keeping my Derek alive, just as they are doing for thousands of covid patients.

‘I’m afraid he is still in a deeply critical condition, but he is still here, which means there is hope. Sending so much love and support to the thousands who have had that hope for their loved ones stolen by this hideous disease. 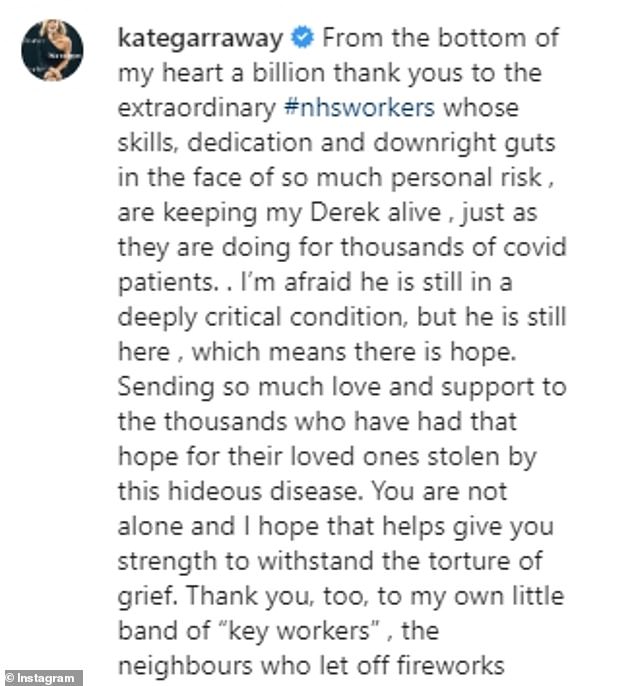 Hard times: Good Morning Britain presenter Kate, 52, took to Instagram to update fans on her husband’s health as she joined the nation in clapping for NHS staff on Thursday

‘You are not alone and I hope that helps give you strength to withstand the torture of grief.

‘Thank you, too, to my own little band of ‘key workers’, the neighbours who let off fireworks tonight for the #nhs, gave the Easter bunny a helping hand to make life feel a bit more normal for Darcey & Billy, those who have dropped off food, and friends family and all of you who have sent messages of love and support. It’s such a comfort.’

Kate then affirmed that the nation must remain united to make it through the devastating pandemic, saying: ‘We must all stand together.’ 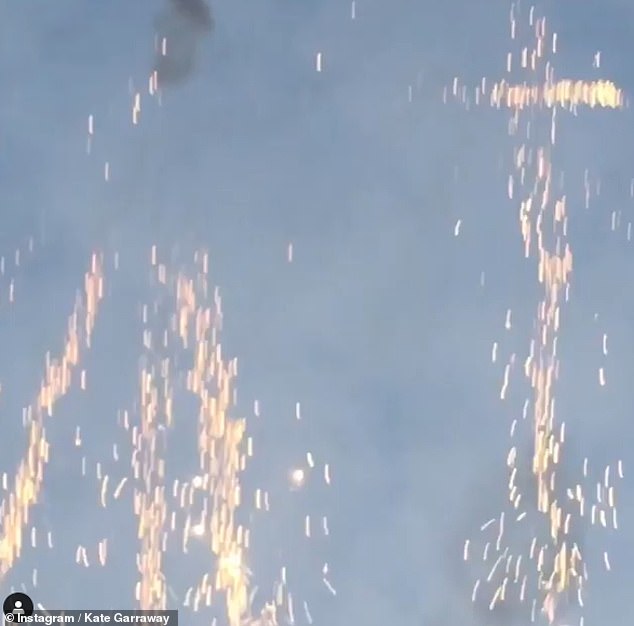 Important: In her post Kate shared a video of fireworks set off by her neighbours during the applause for NHS staff, as she praised them for their own offers of help during the crisis

On last Friday’s Good Morning Britain, Ben read out a message from Kate on her husband’s condition, saying it continued to be an ‘excruciatingly worrying time,’ as he battled the ‘horrific’ virus.

It said: ‘Derek remains in intensive care and is still very ill. I’m afraid it remains an excruciatingly worrying time.

‘The NHS team that have been working on him have been extraordinary and I know its only their professionalism, dedication and bravery that has kept Derek with us so far. I also know that they are working just as hard on all the patients in their care.

‘It’s hard to find the right words because thank you alone just doesn’t seem enough but I do thank them with all my heart as I know Derek would if he could.

‘I would like to thank everyone who has sent messages of support. I’m sorry I haven’t been able to respond to them, but I’m sure you’ll understand I’m doing everything I can to focus on Derek right now.

‘However in quieter moments I’m seeing them and they are so comforting and wonderful to read.

‘I’m very aware I’m not the only one going through this torture, there are thousands of families everywhere are worried about their loved ones and hundreds more every day too that are having to deal with the worst news that their loved ones have been taken by this horrific virus.

‘I want to send a message of love and support to all of you going through this you are not alone we must all stand together and support one another and I’m praying to be able to talk with you with some positive news shortly. Lots of love, Kate.’ 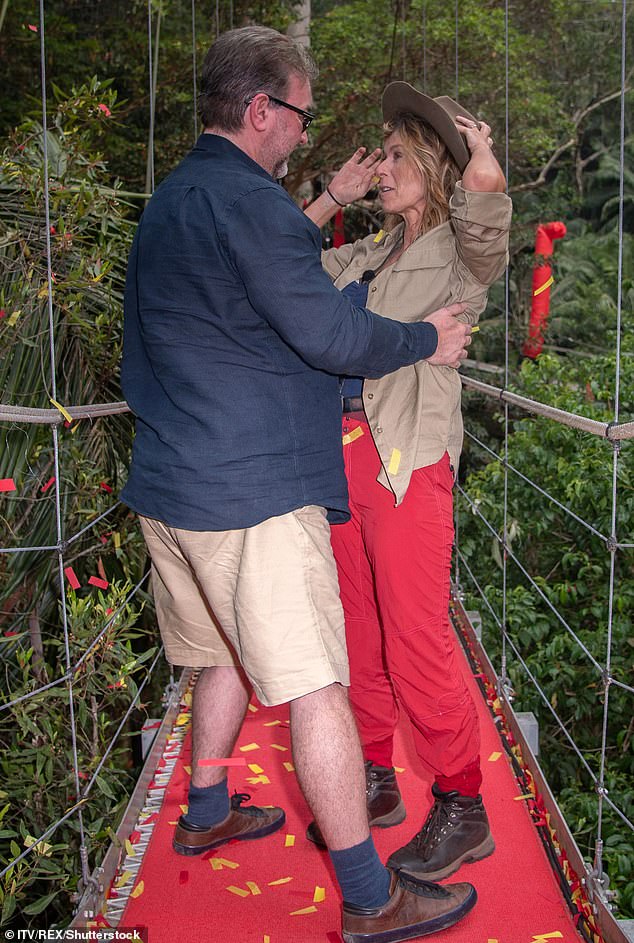 Brave: The mother-of-two previously said she was suffering from ‘mild symptoms,’ but had not been tested for COVID-19, and was isolating at home (pictured with Derek in December 2019)