The Duchess of Cambridge was charmed by a toddler wearing a waistcoat and bow tie as she and William kicked off a surprise visit to Northern Ireland on Wednesday.

Dressed in a £1,200 red Carolina Herrera coat, Kate, 37, cooed over the little boy who was waiting with his mother outside Belfast’s Windsor Park football stadium.

William and Kate will visit Belfast, Fermanagh and Ballymena on a trip designed to celebrate young people.

The couple are kicking off the tour with visit to Windsor Park football stadium, home of the Irish Football Association.

The Duke and Duchess of Sussex have arrived in Belfast for a surprise two-day visit to Northern Ireland. One adorable young well-wisher cheekily stuck out his tongue when the Duchess of Cambridge came over to meet him outside Windsor Park 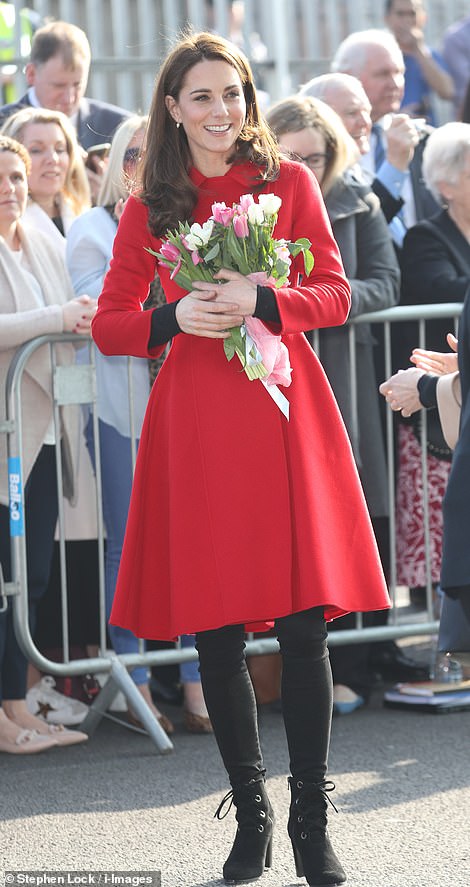 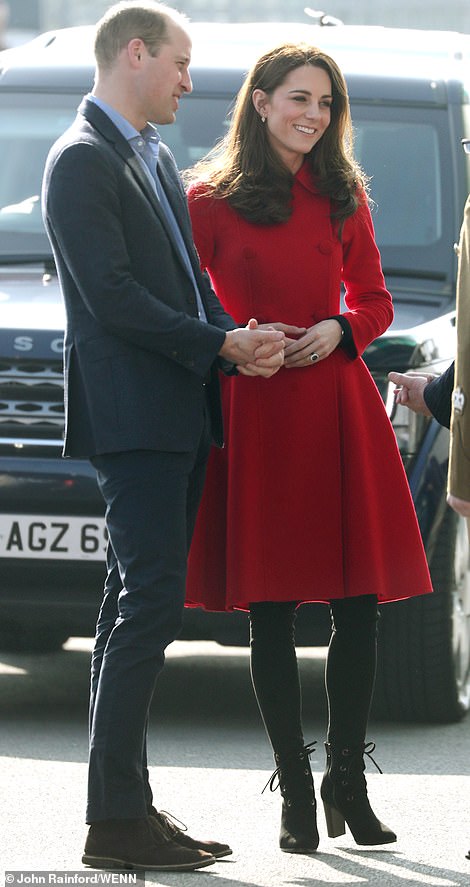 The Duke and Duchess of Cambridge have arrived in Northern Ireland for a surprise two-day tour. The couple are kicking off the tour with visit to Windsor Park football stadium, home of the Irish Football Association 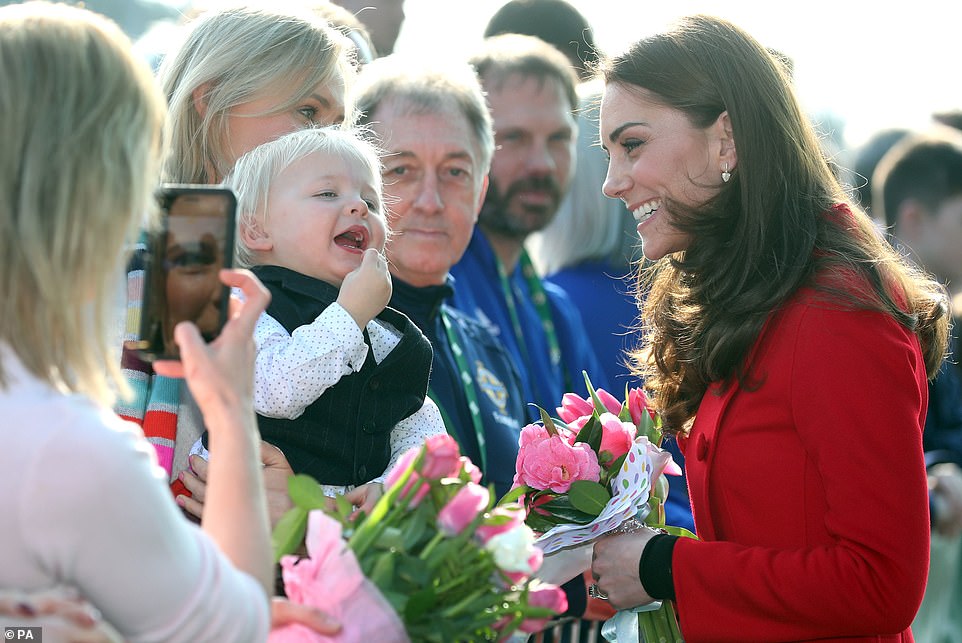 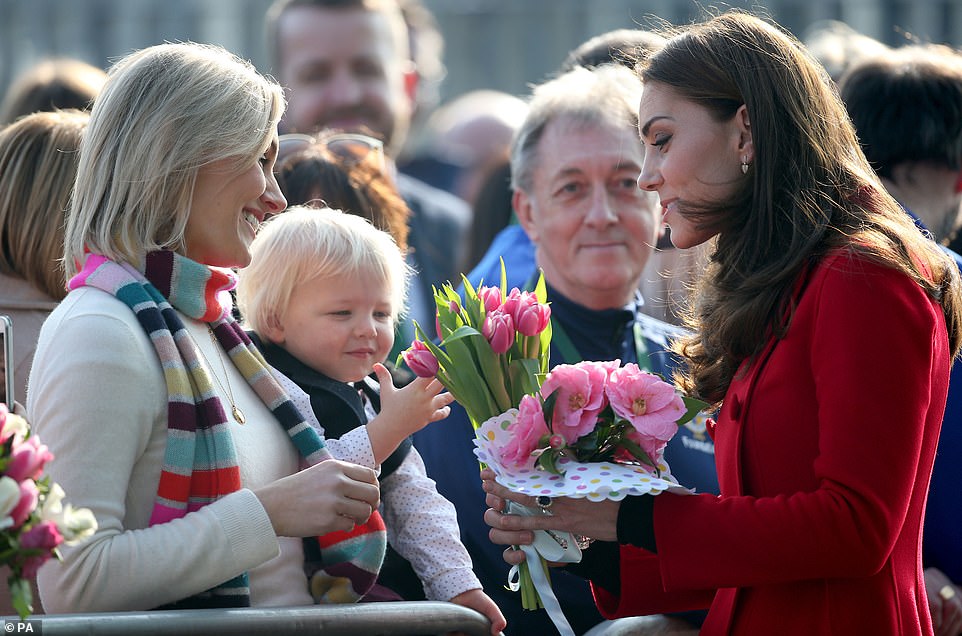 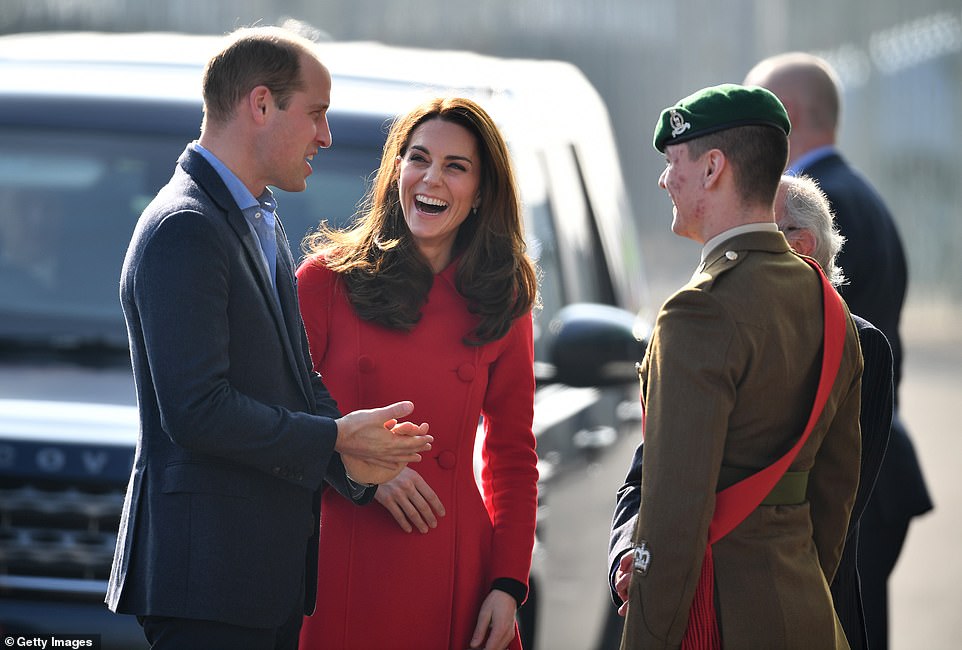 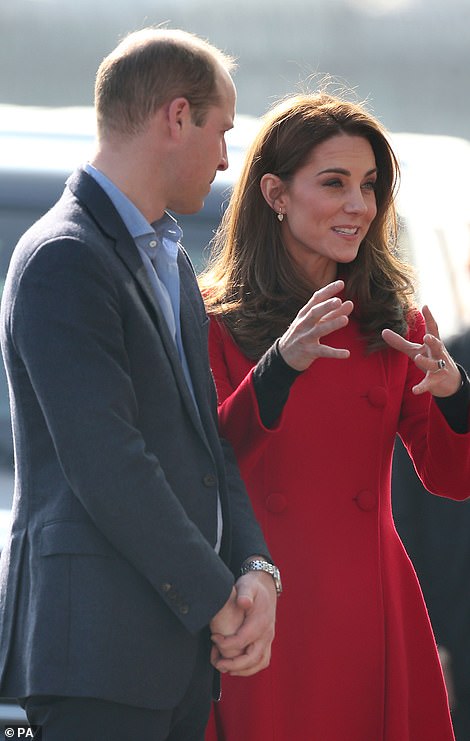 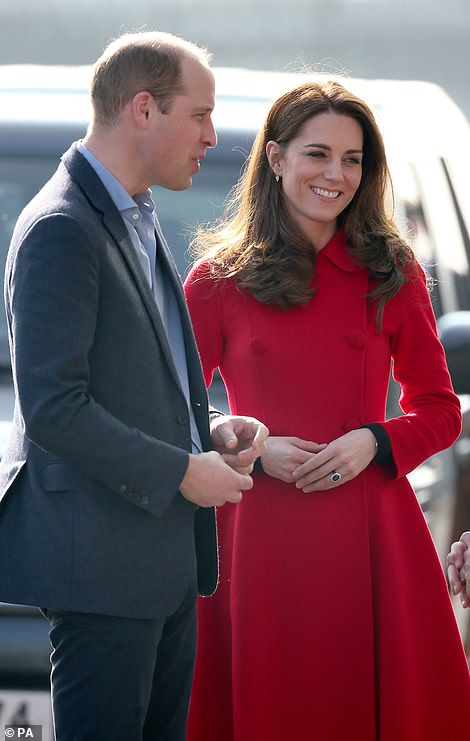 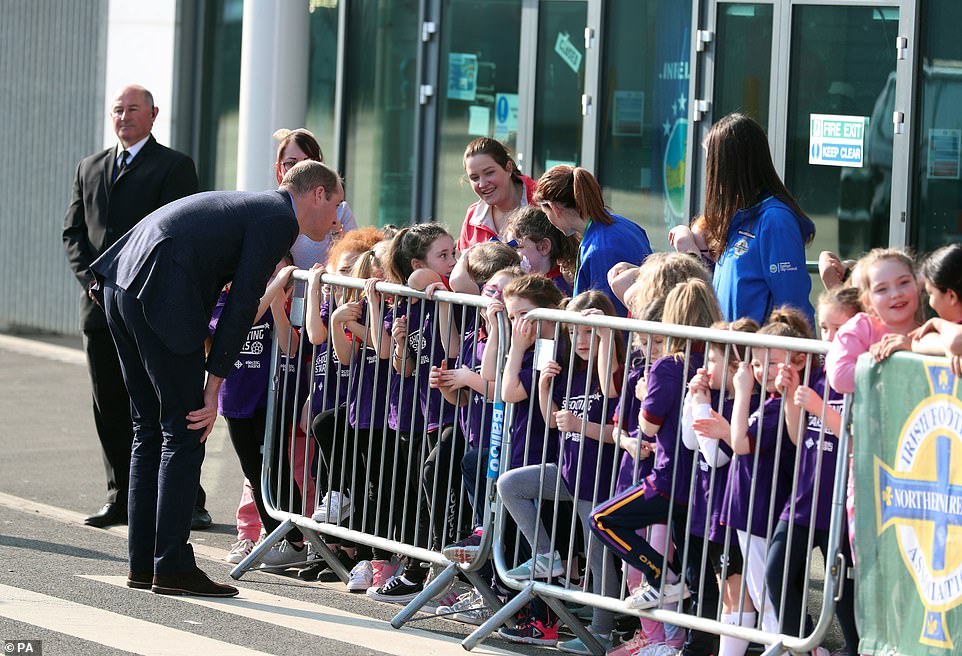 Father-of-three William bent down to speak to some of the children waiting outside Windsor Park for the couple, pictured 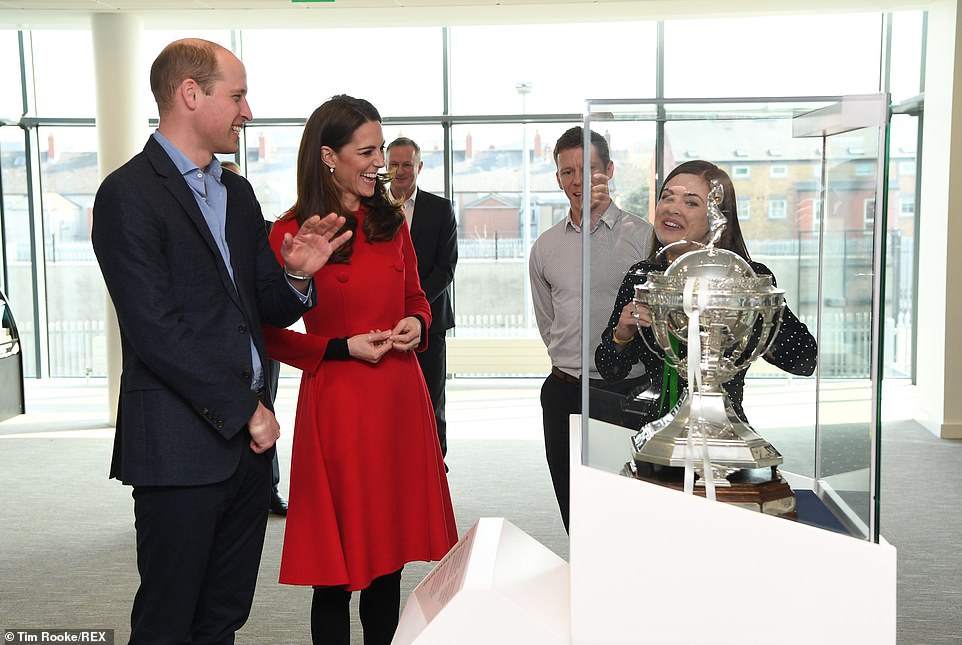 Football fan Prince William looked delighted as he was given a tour inside Windsor Park, home of the Irish Football Association

On arrival at the National Stadium at Windsor Park, the couple were greeted by scores of cheering schoolchildren.

William and Kate stopped to chat with the crowds, with the Duchess being presented with a number of bunches of flowers.

International boss Michael O’Neill was among senior Irish Football Association staff who welcomed them at the entrance to the recently redeveloped venue.

O’Neill, who himself won 31 caps playing for Northern Ireland, has been credited with bringing the glory days back to the team during his tenure as manager. 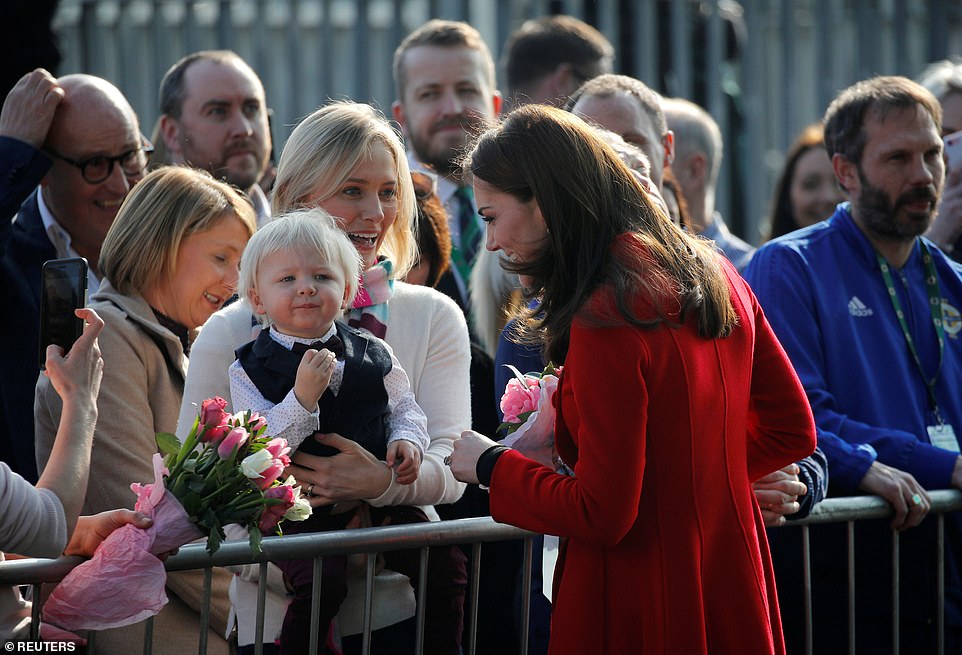 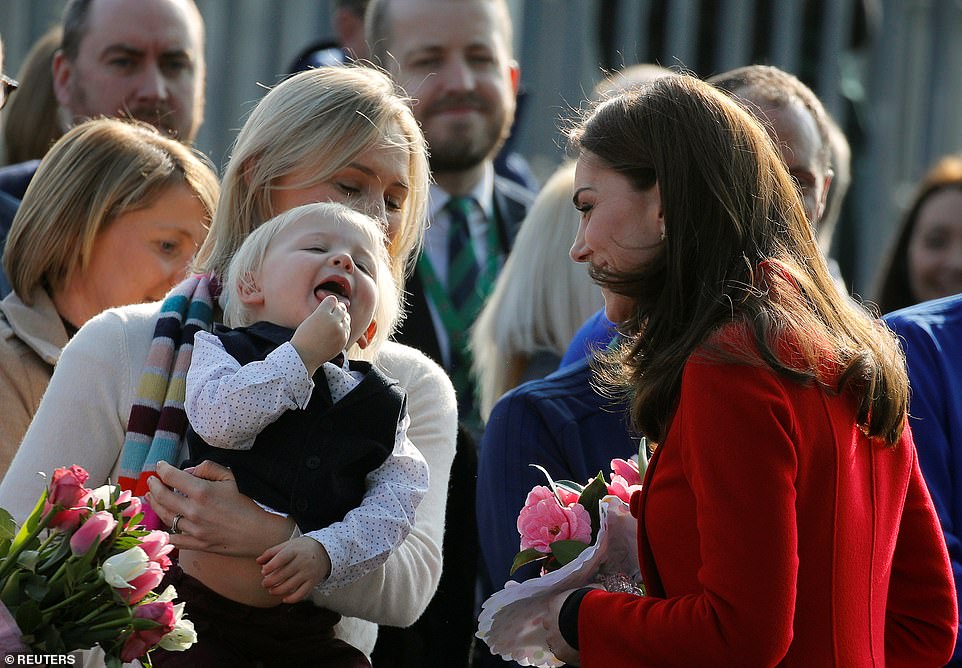 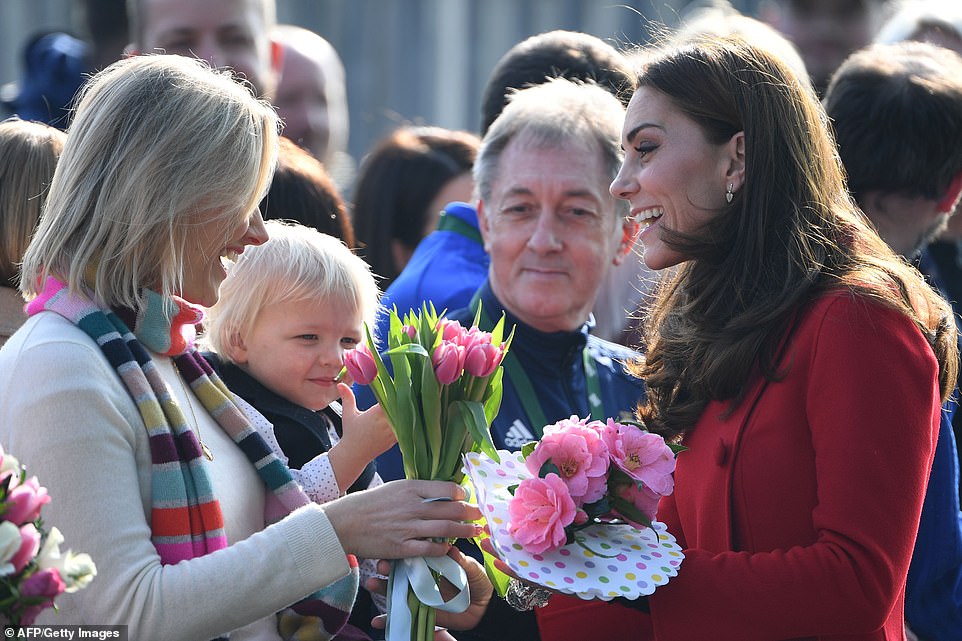 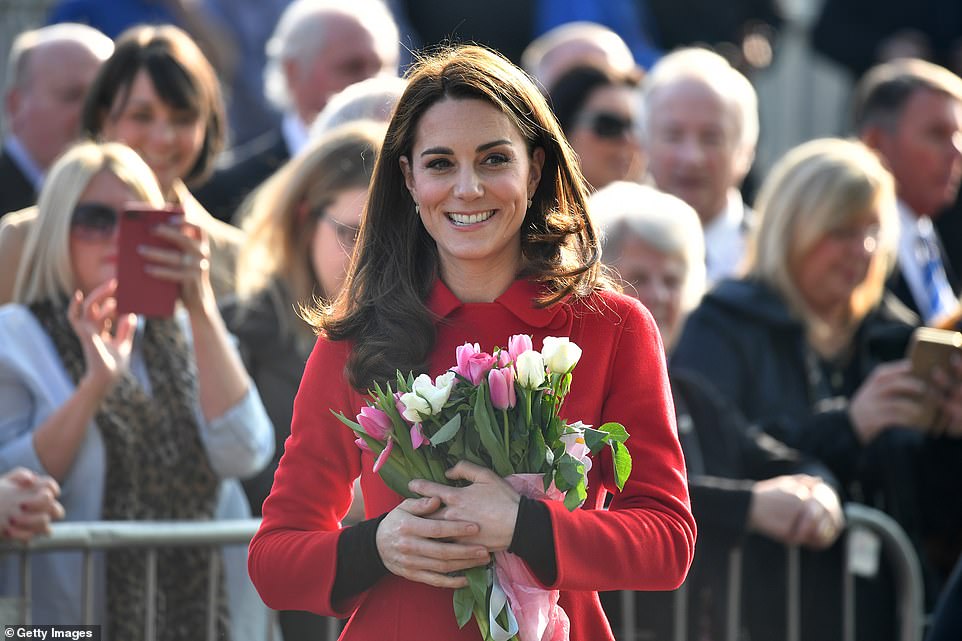 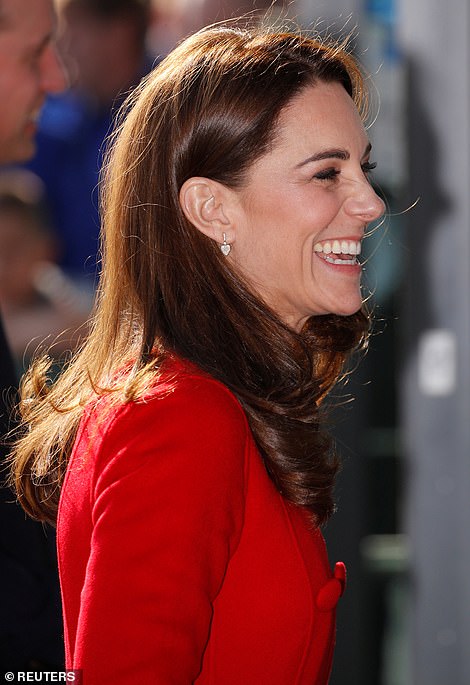 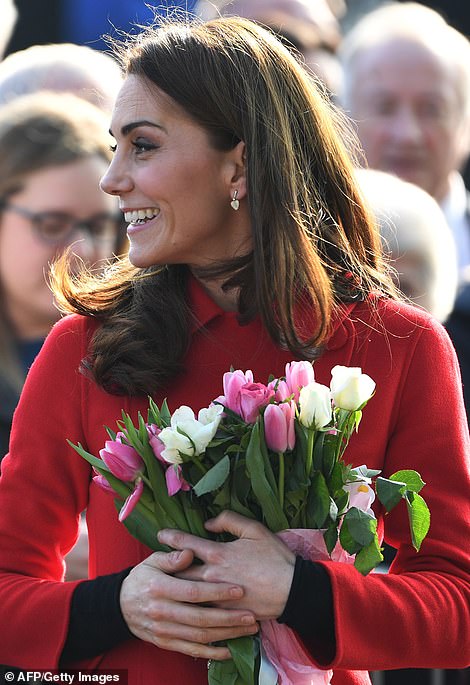 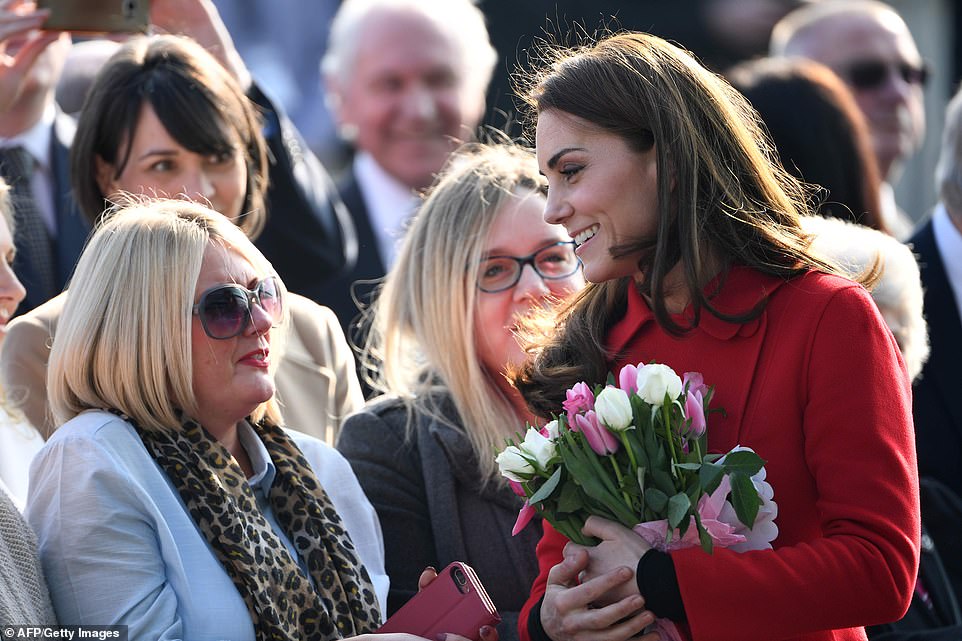 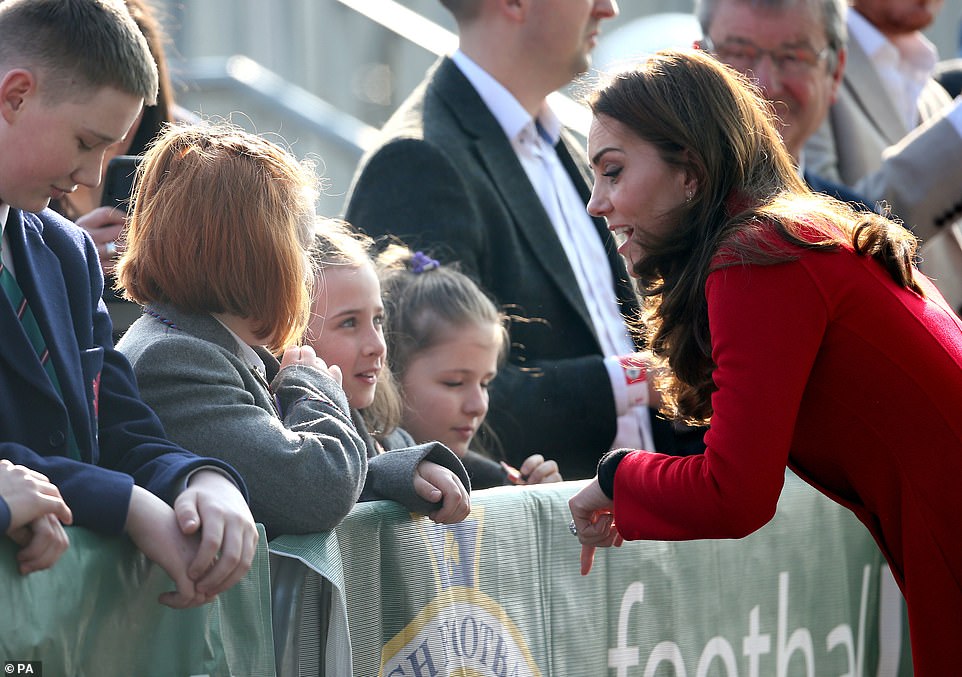 A group of young schoolgirls looked in awe of the Duchess of Cambridge, 37, as she leaned down to speak to them

He led the side to its first major tournament in 30 years at the 2016 European Championships in France.

During their tour of the venue, the couple also met Northern Ireland footballing legend Pat Jennings.

Former Spurs and Arsenal goalkeeper Jennings is Northern Ireland’s record caps holder, with 119 appearances during a career that took in the 1982 and 1986 World Cup Finals.

William and Kate were shown a bronze cast print of the stopper’s celebrated ‘safe hands’ as they walked through the stadium’s heritage centre.

The couple will then travel to the Roscor Youth Village charity in Co Fermanagh, which is a residential activity centre for children referred by social workers.

It is the third time the couple have visited the region together. 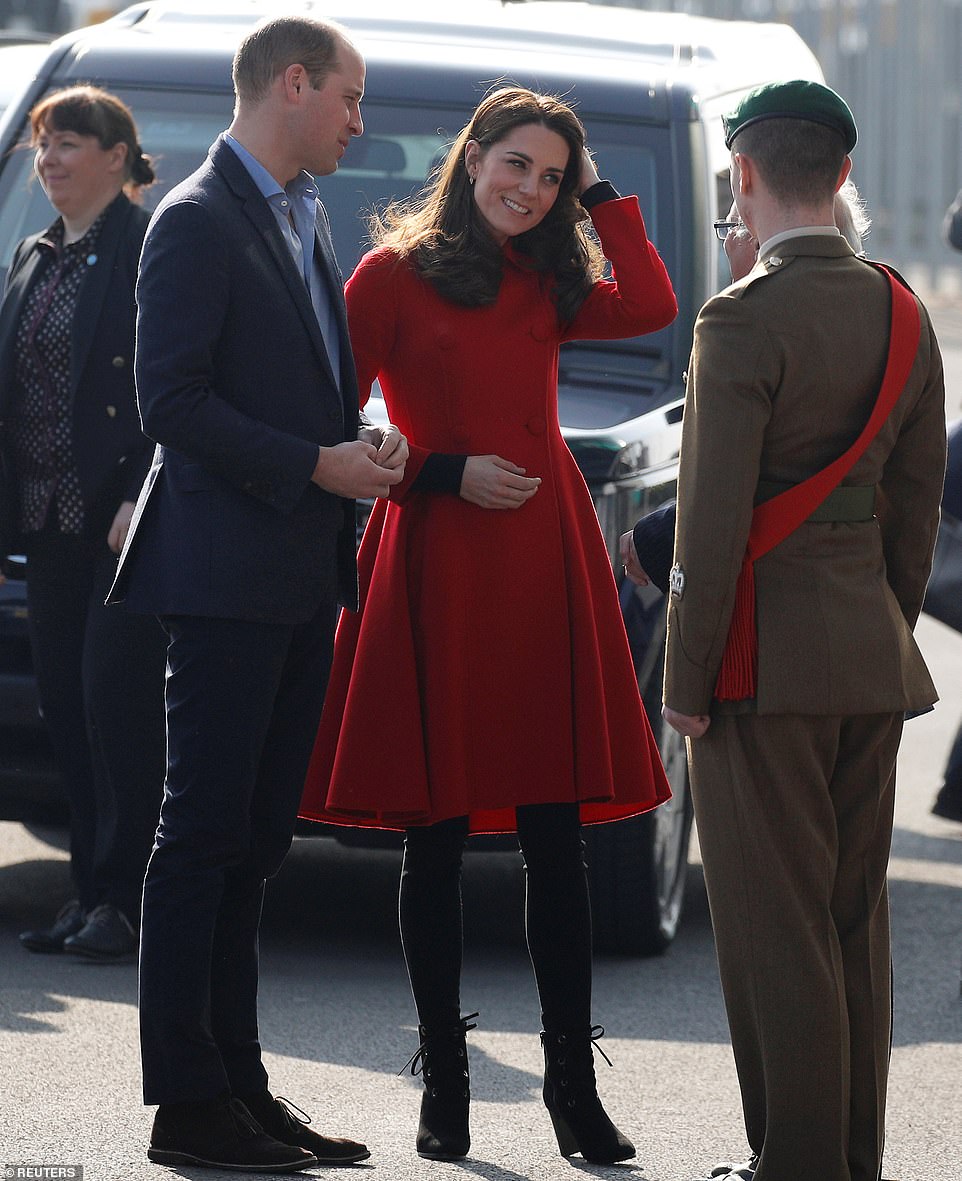 The Duchess of Cambridge donned a £1,200 Carolina Herrera coat and LK Bennett boots for the occasion 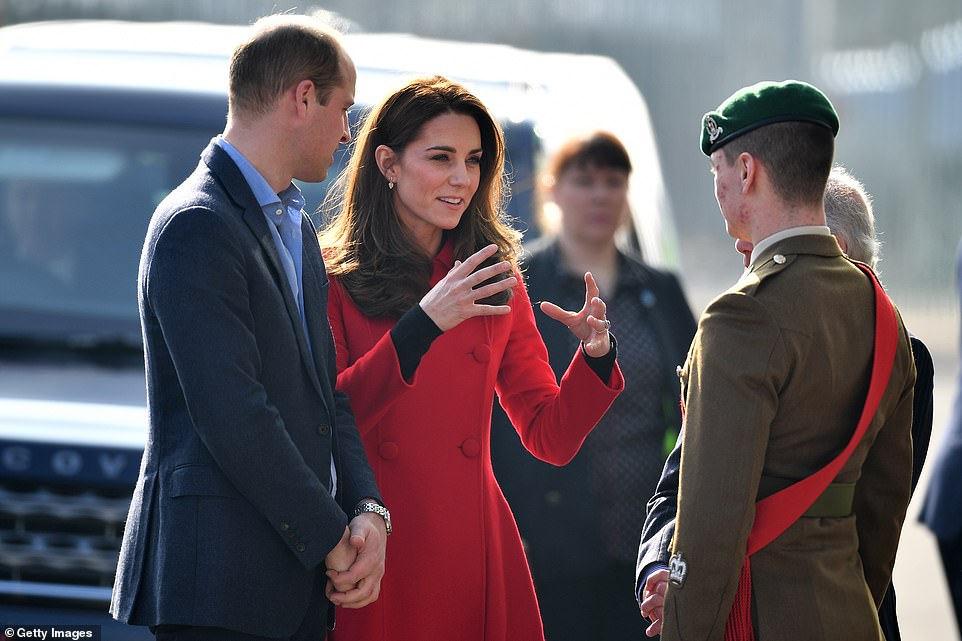 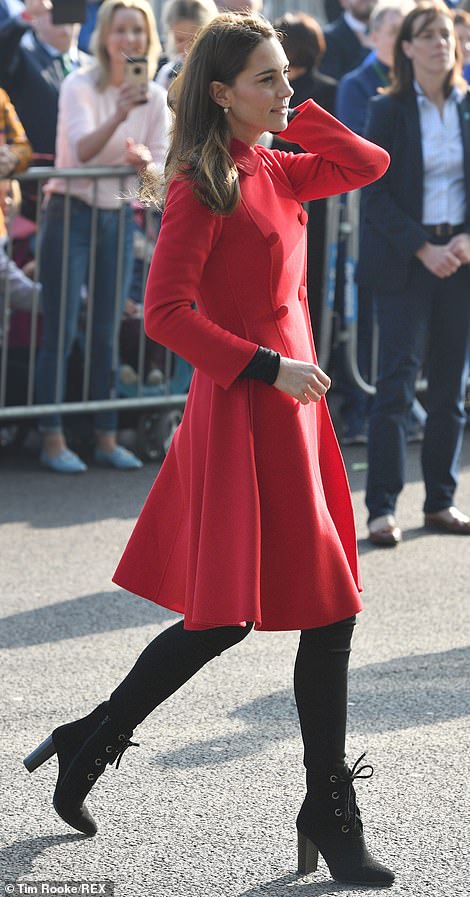 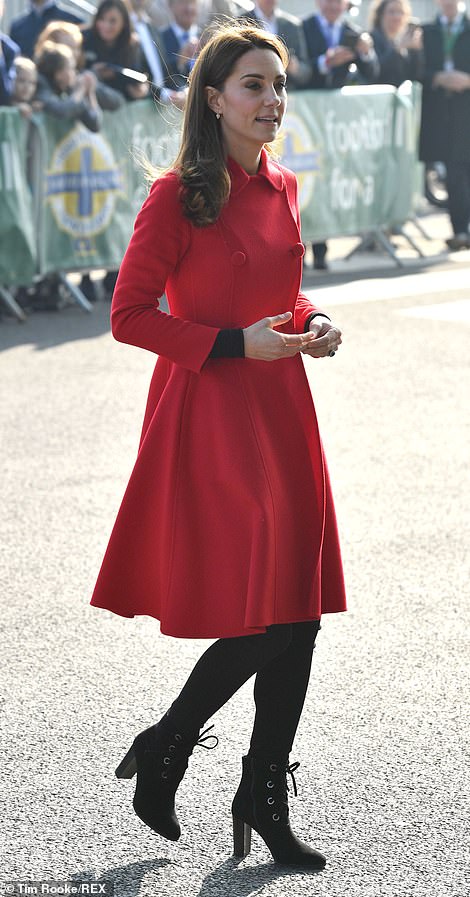 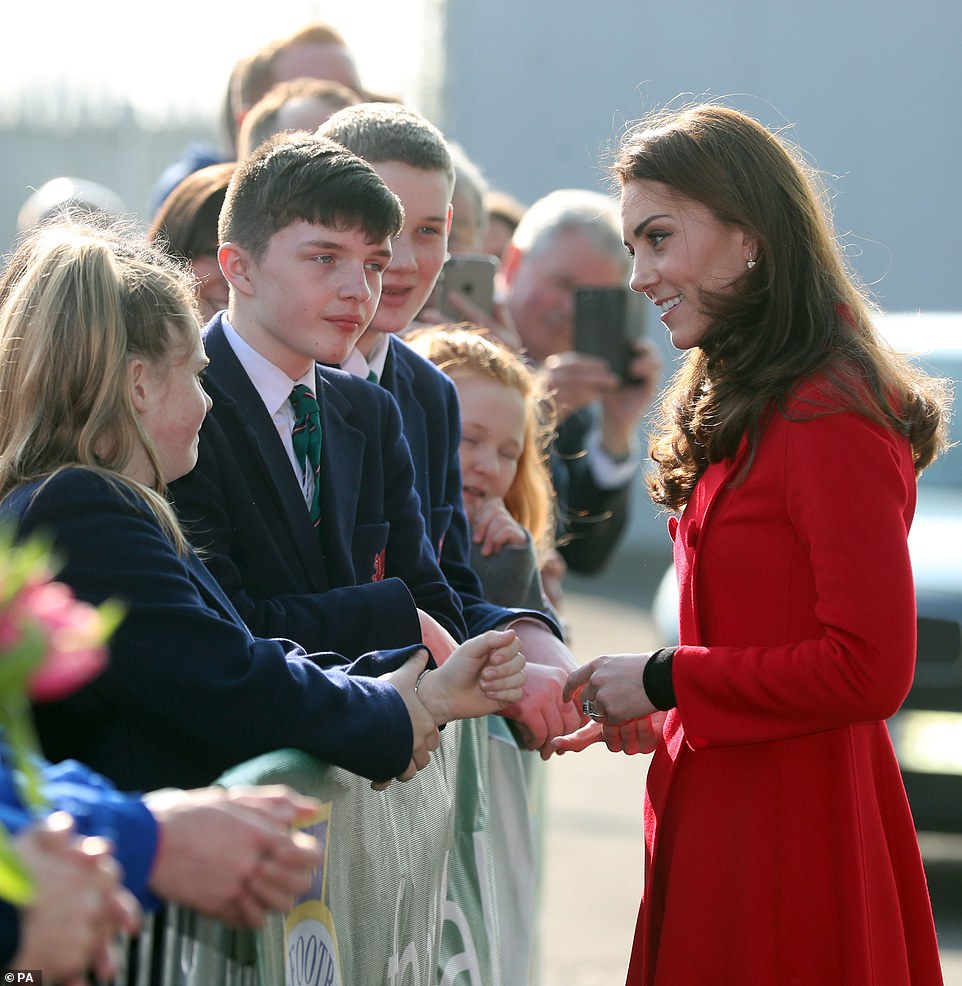 On arrival at the National Stadium at Windsor Park, the couple were greeted by scores of cheering schoolchildren 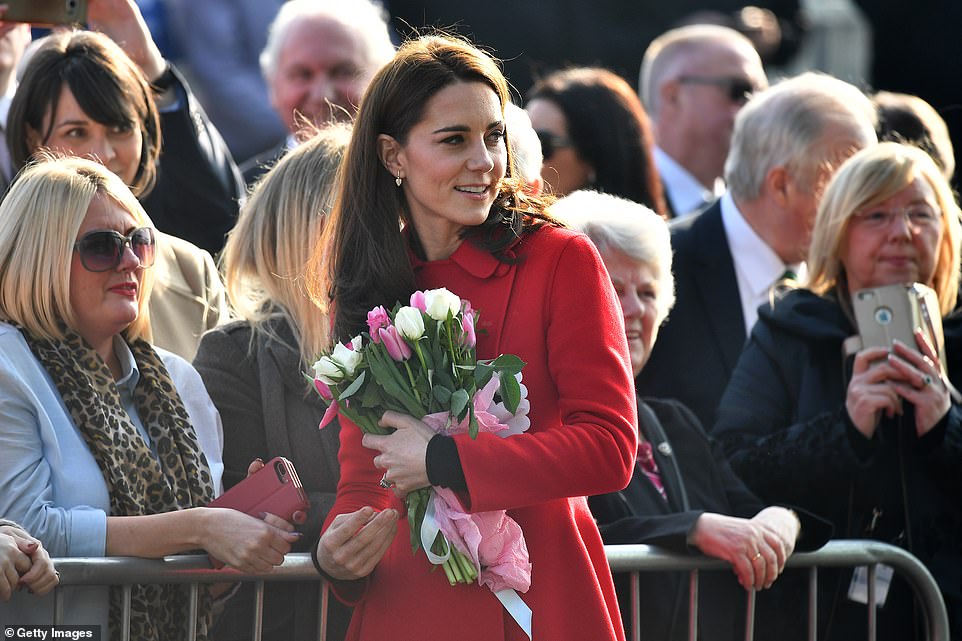 The Duke and Duchess of Cambridge have arrived for a two-day tour and started the visit at Windsor Park, pictured

Their final visit of the day will be to Belfast Empire Hall to celebrate ‘inspirational young people who are making a real difference in Northern Ireland’.

On previous visits, the couple attended a garden party at the royal residence at Hillsborough Castle, Co Down, in June 2016, when they mingled with many of the 2,500 invited guests.

On that occasion, Kate tossed pancakes at Belfast City Hall and hammered in fence posts at Greenmount Agriculture College in Co Antrim.