Kate Middleton arrives for a visit at a London nursery

Breakfast with the Duchess! Kate Middleton dons skinny jeans and wraps up in a blue coat for a nursery visit to discuss her early years development survey

The Duchess of Cambridge appeared in excellent spirits as she arrived for an early morning visit to a south London nursery today.

Kate, 38, wrapped up in an eye-catching blue coat for the outing to LEYF (London Early Years Foundation) Stockwell Gardens Nursery & Pre-School, where she will discuss her landmark early years survey with staff.

The royal will also hear about the importance of nutritious food for a child’s development – and help serve breakfast to the youngsters.

It is the third engagement in as many days for the Duchess, following an appearance at a Holocaust Memorial Day service in London on Monday and a visit to a London’s children’s hospital yesterday. 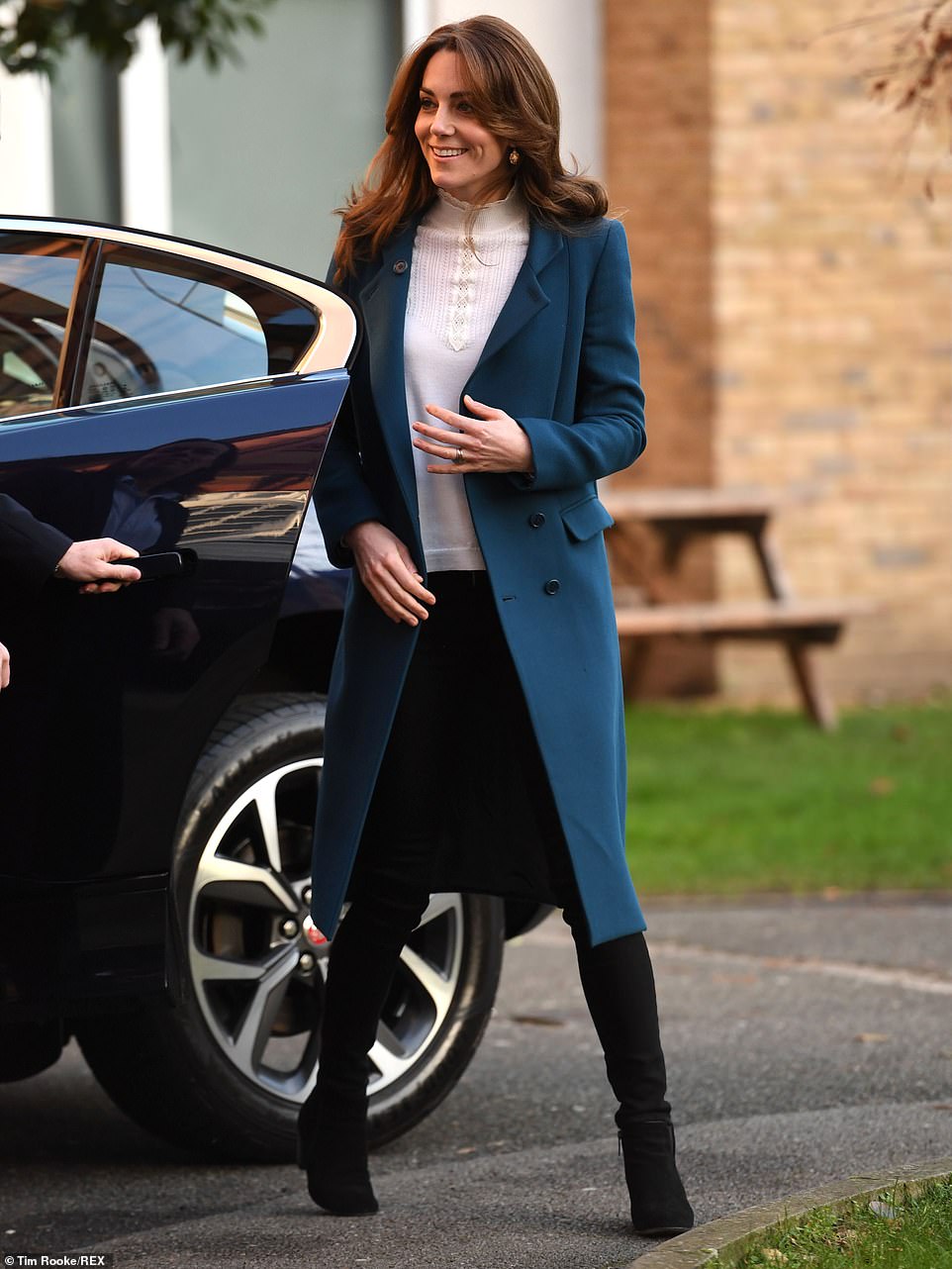 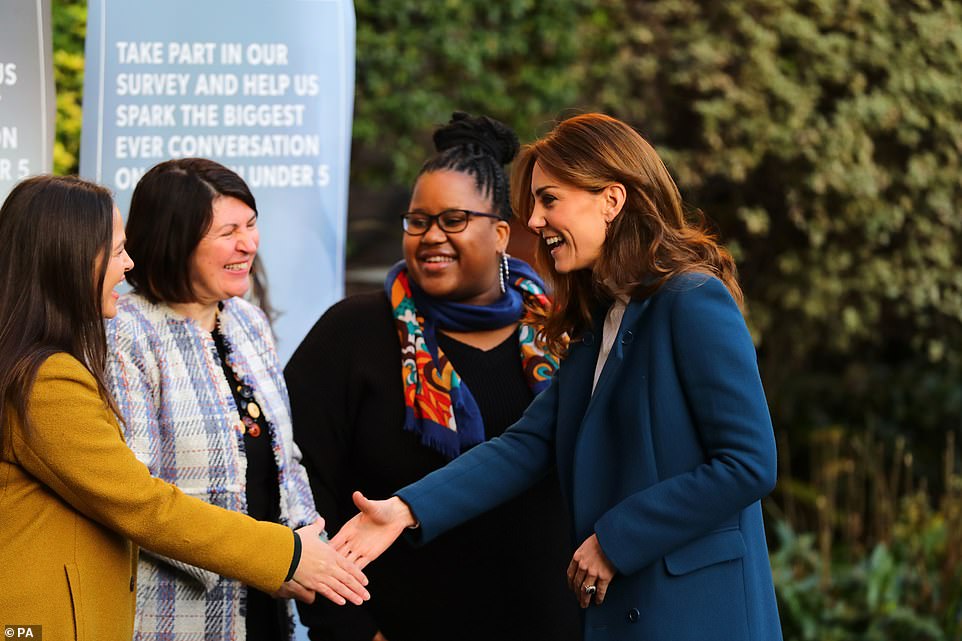 The Duchess smiled broadly as she was greeted by staff outside the nursery before making her way inside, pictured 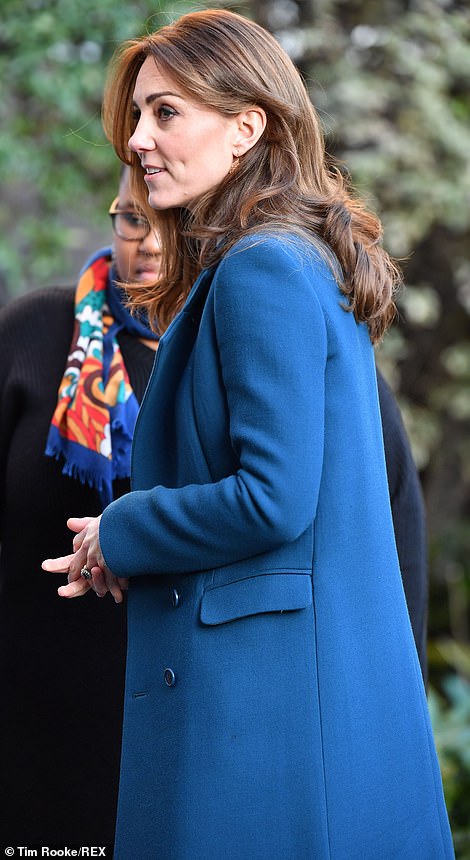 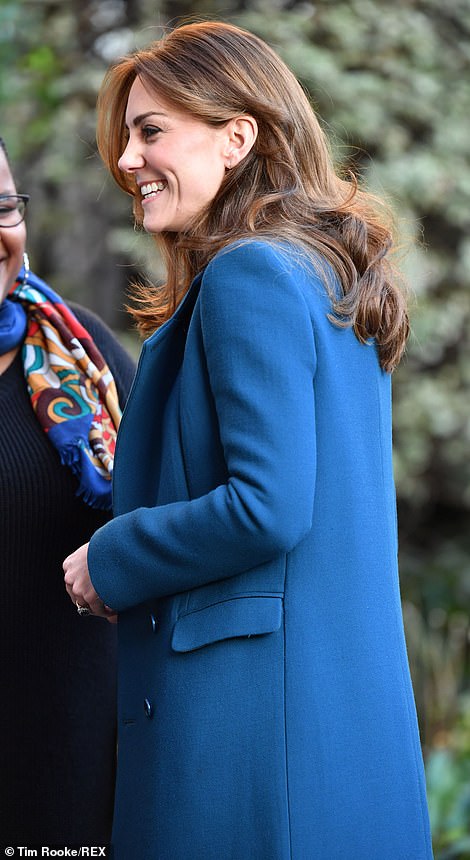 The Duchess of Cambridge brought a splash of colour to a winter’s day in her vibrant coat, which she wore loose on arrival 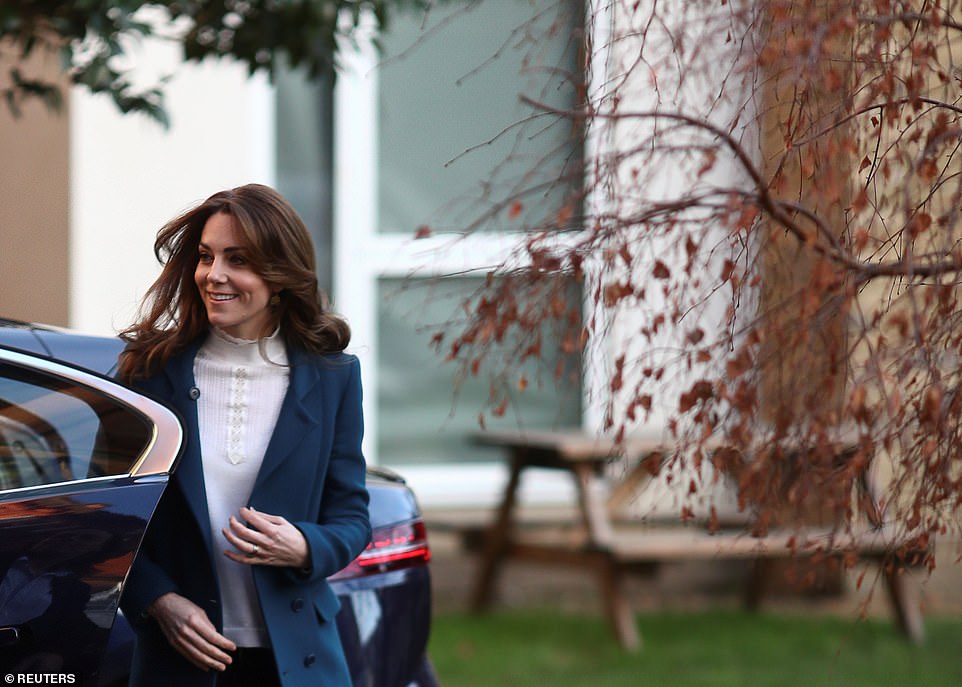 The Duchess will discuss her survey, Five Big Questions On The Under Fives, which was launched last week and aims to spark a UK-wide conversation on raising the next generation.

Kate announced the landmark research with a whirlwind tour of the UK, starting at Birmingham Science Museum and taking in stops at Ely and Careau Children’s Centre in Cardiff and HMP Send near Woking.

The online survey, conducted by Ipsos Mori on behalf of the Royal Foundation, is thought to be the biggest of its kind and aims to encourage a nationwide conversation on early childhood.

During the visit The Duchess will hear about the importance of nutritious food for a child’s development from apprentices at the LEYF Early Years Chef Academy, before helping nursery teachers to serve breakfast to the children.

The Duchess of Cambridge wore a teal coat, white jumper and black slim jeans with boots for the outing this morning

The LEYF is a social enterprise that aims to add value to the life of the community and future generations by strengthening local networks, demonstrating the role that everyone has.

It operates 39 nurseries in some of London’s most disadvantaged areas and provides high-quality childcare to more than 4,000 children, employing more than 800 staff locally – along with 60 apprentices – across 11 London boroughs.

Kate, dressed in a Dolce & Gabbana jacket and skirt, posed for Instax instant photos and helped cut-out paper people with young patients and their families.

The royal was also given a handmade ‘rag wreath’ by Luke Wheeler-Waddison, 10, and his little sister Savannah, four, which she promised to put up in her daughter Princess Charlotte’s room.

The duchess, who is patron of the hospital, was also there in her capacity as patron of the National Portrait Gallery (NPG) which runs creative arts workshops for young patients at hospitals across London.

The Duchess of Cambridge kept her look polished for the engagement today, plumping for a bespoke boucle tweed two-piece from Italian fashion house Dolce & Gabbana.