It was the same dress the duchess wore when she attended the BAFTAS in February 2017 but the off-the-shoulder gown had been refashioned to include sleeves.

Kate was in vibrant mood as she mingled with stars such as ex-England football Captain David Beckham and his fashion designer wife Victoria, Naomi Campbell, Kate Moss and Bianca Jagger.

But she wasn’t the only royal at the glittering event; her husband Prince William’s cousin, Princess Beatrice attended as a guest with her partner Edoardo Mapelli Mozilla for the first time.

The couple, who have been tipped to wed, were hosted by Philippe Ghanem and Sabine Getty, a socialite and Swiss-norm jewellery designer.

Queen of recycling! Fresh from a busy day of royal engagements, Kate, 37, stunned in an old Alexander McQueen look as she joined a host of celebrities at the 2019 Portrait Gala in London on Tuesday evening 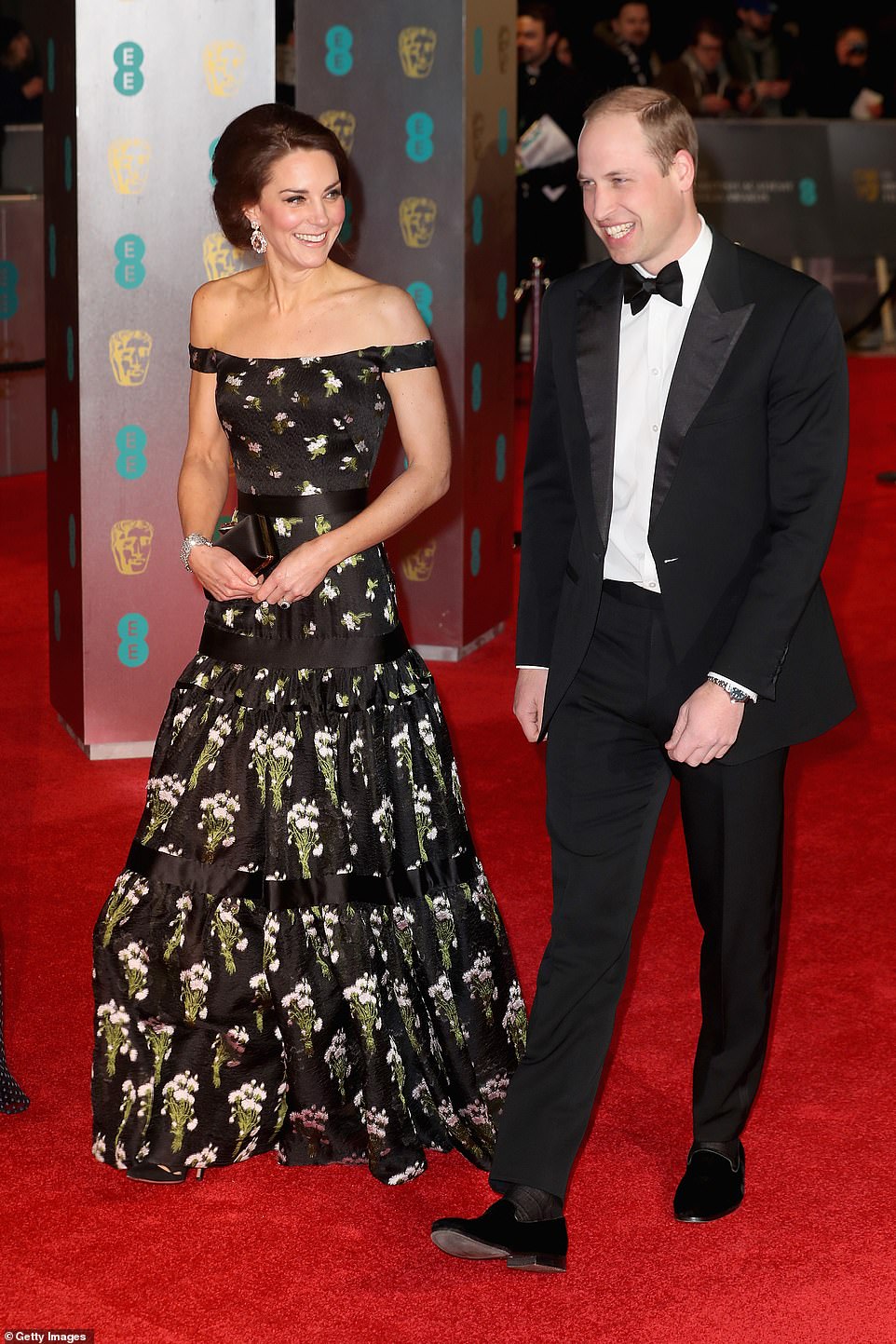 Kate’s jaw-dropping Alexander McQueen gown, featuring white floral detail, is believed to be a customised version of a gown she wore to last year’s BAFTAs (pictured on the red carpet with Prince William in February 2017) 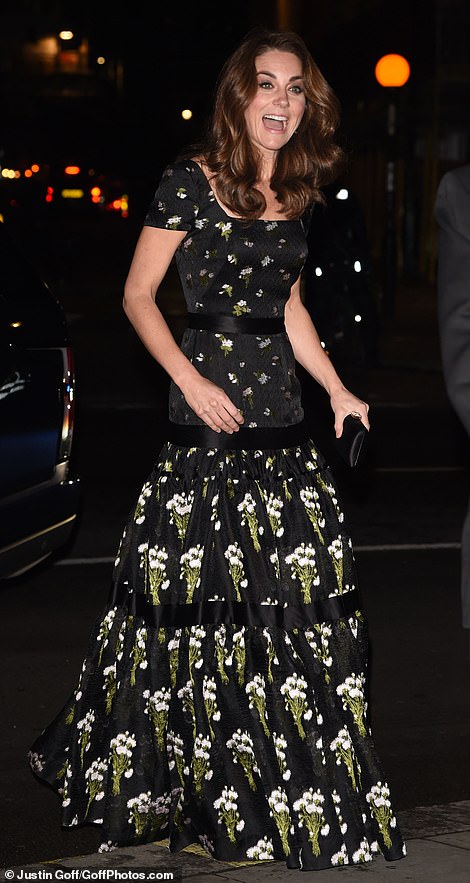 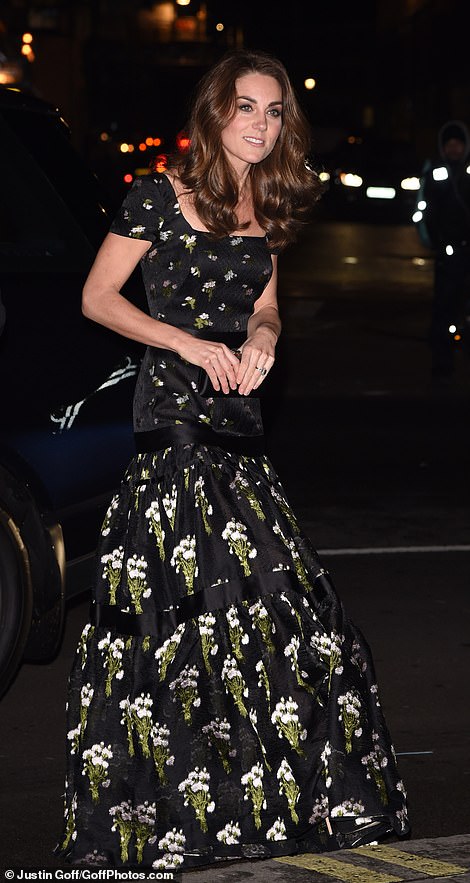 Kate’s black dress, featuring white floral detail, is believed to be a customised version of a gown she wore to the 2017 BAFTAs. This year’s gala will support Inspiring People: Transforming our National Portrait Gallery

It was the third time that Kate, Patron of the National Gallery, has attended the annual fundraising gala.

Inside she was also introduced to chairman of the Trustee Board for the gallery David Ross and Edward Enninful OBE, Chairman of the Gala Committee.

Kate, who studied at the British Institute in Florence and the University of St Andrews, also chatted to members of the galleries Youth Forum and viewed art produced by the gallery’s outreach programmes. 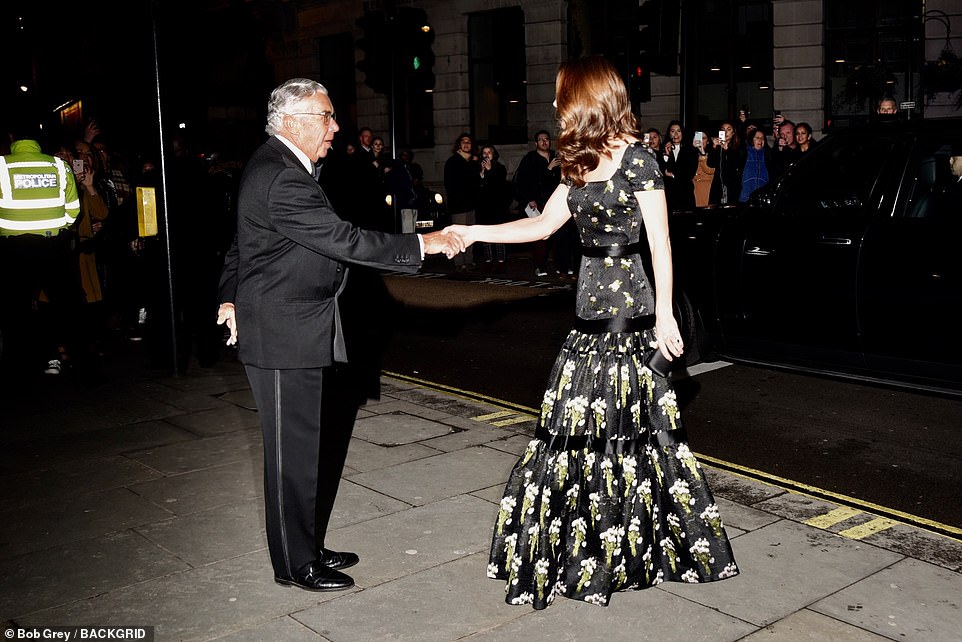 Kate wows in Alexander McQueen as she arrives at the National Portrait Gallery. The duchess, a history of art graduate and keen amateur photographer, is due to meet members of the gallery’s Youth Forum tonight and view artwork 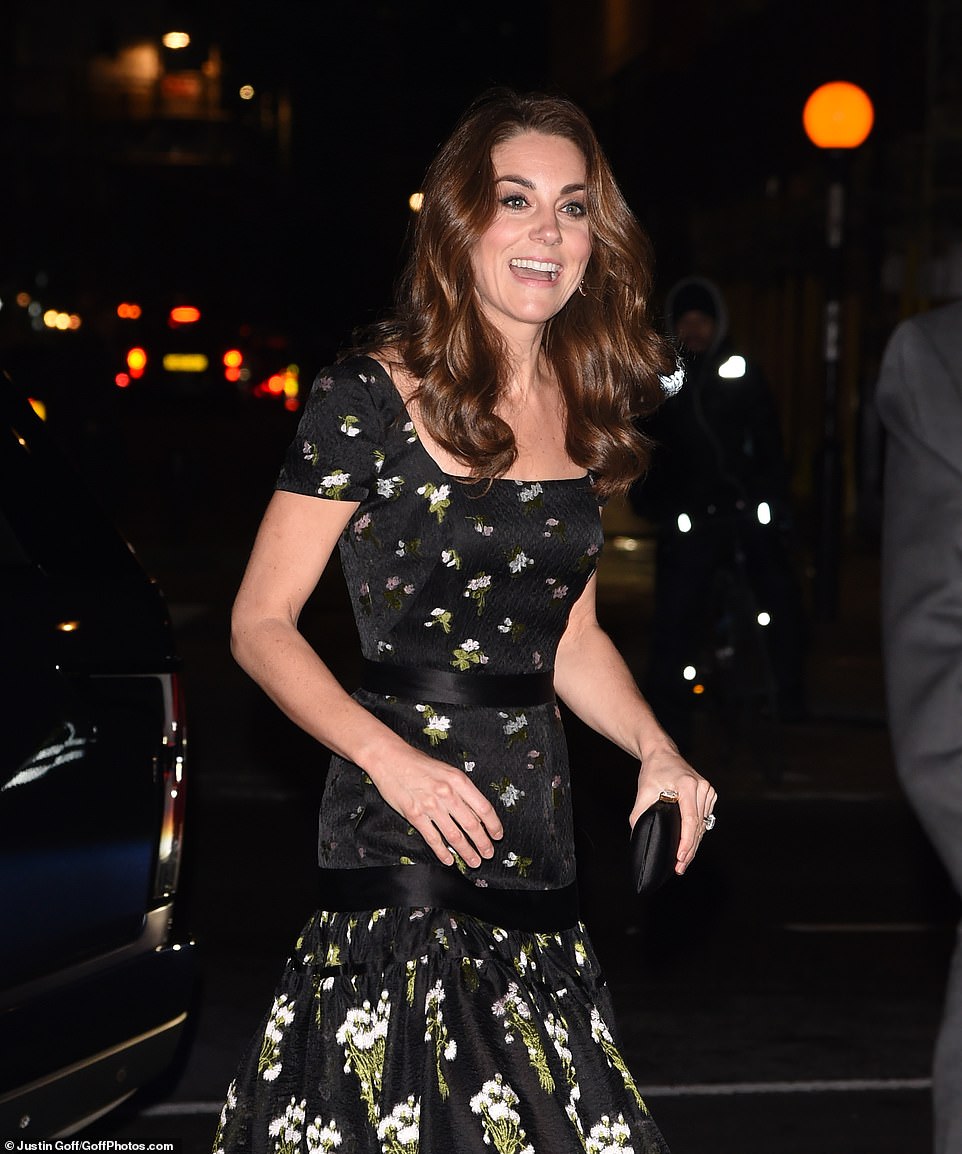 Kate is all smiles as she arrives at the National Portrait Gallery tonight. The gallery is home to Paul Emsley’s infamous 2012 painting of Kate, her first official portrait which received mixed reviews when it was unveiled just over six years ago

She met youth team members Hannah Ladmore, Isabella Titherington, Savanna Achampong and Perpetual Png Funds raised on the night go towards a project for the complete renewal of the gallery that will see a significant refurbishment of the building.

Kate was also told of the gallery’s most extensive programme of activities nationwide, with plans to engage audiences onsite, locally, regionally and online.

Activity includes a UK wide schools programme for teaching history and art, a national skills – sharing coll aboration with other museums and galleries and new partnerships with organisations throughout the country.

As part of this programme the Gallery will work with museums in Cornwall, Coventry, Sheffield and Southampton on the Creative Connections project; a co-curated exhibition programme for young people, which will result in students creating new art works alongside artists and a display of portraits from the Gallery’s Collection at each venue.

new art works alongside artists and a display of portraits from the Gallery’s Collection at each venue.

The gallery is home to Paul Emsley’s infamous 2012 painting of Kate, her first official portrait which received mixed reviews when it was unveiled just over six years ago. 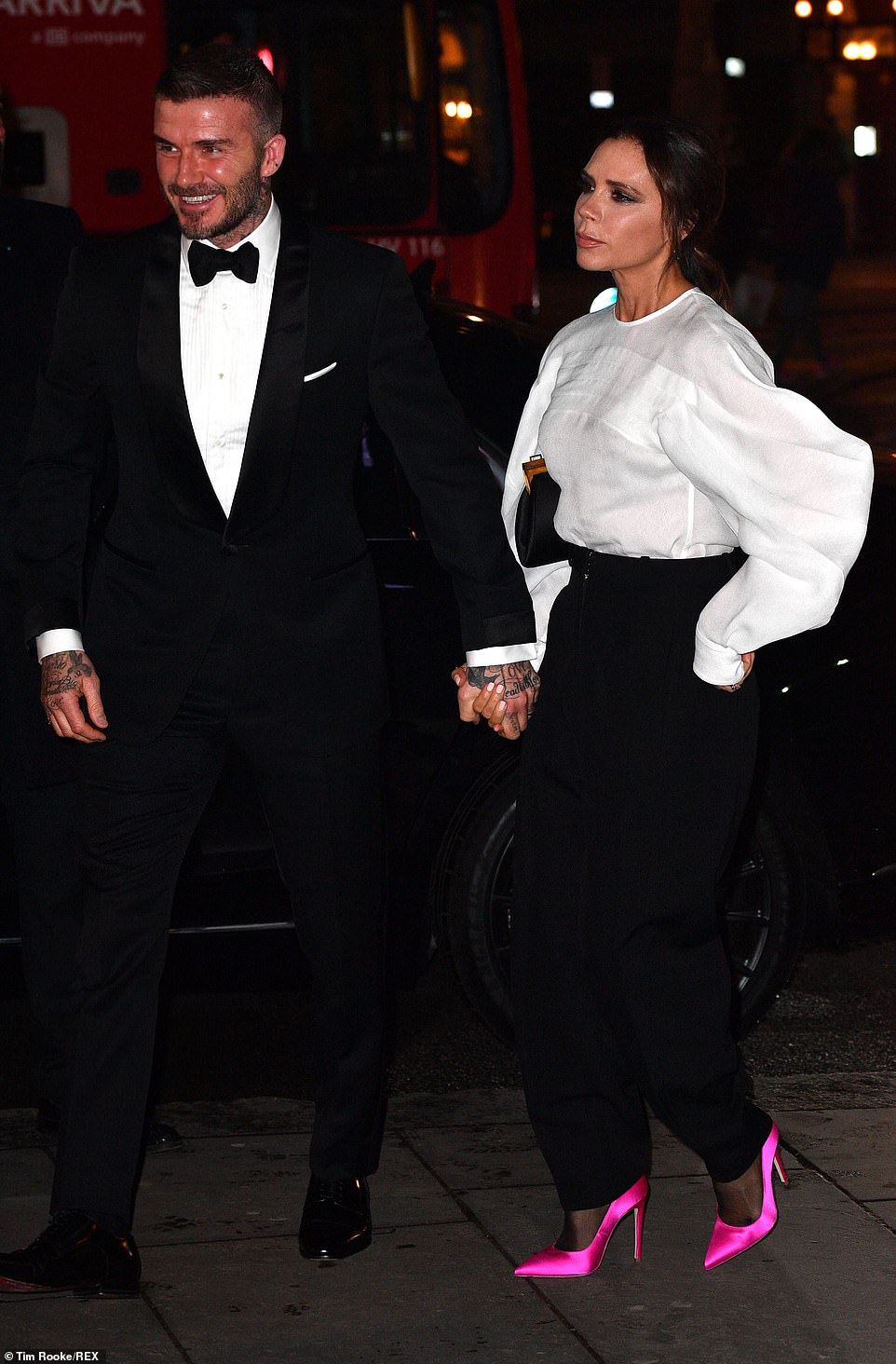 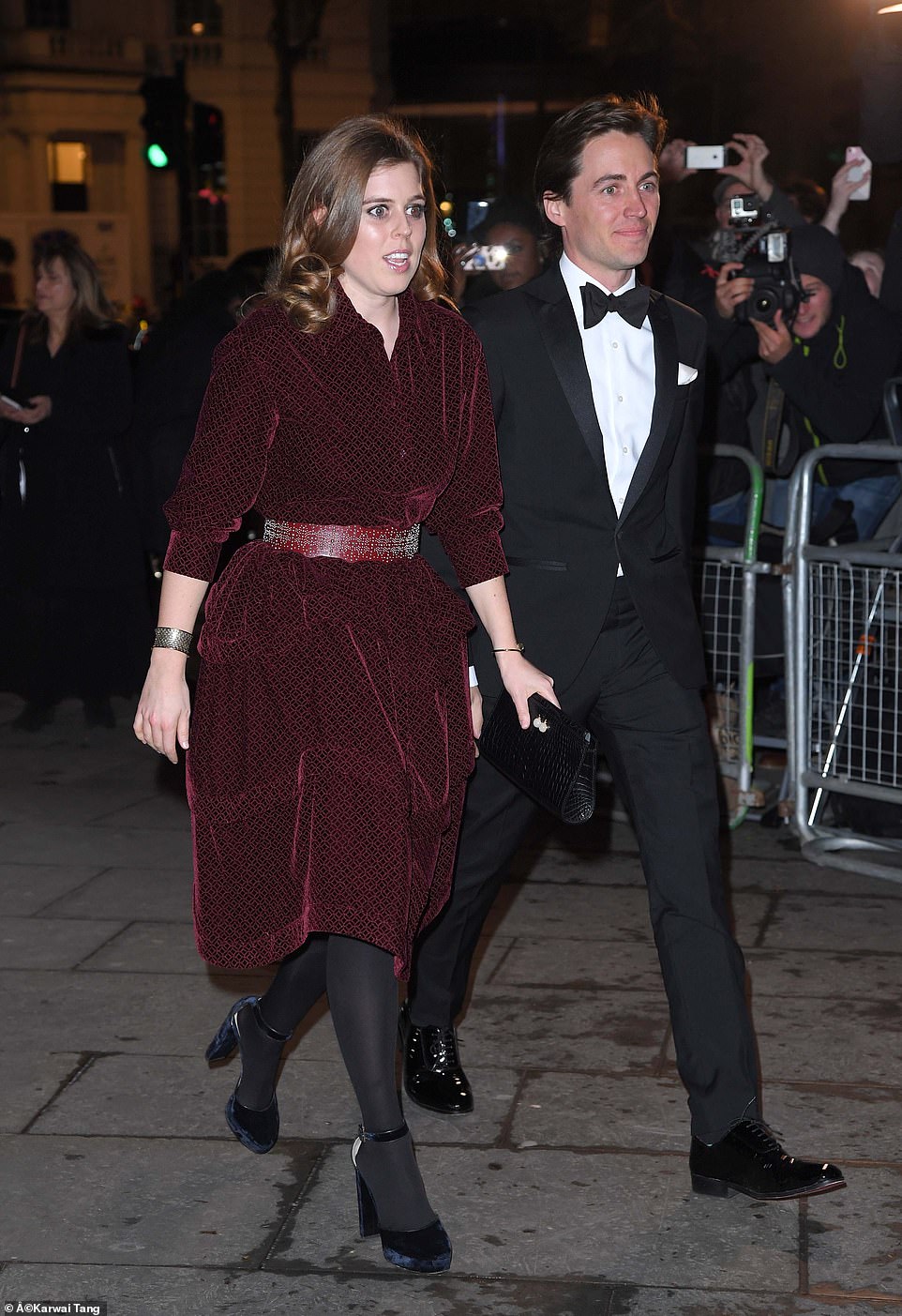 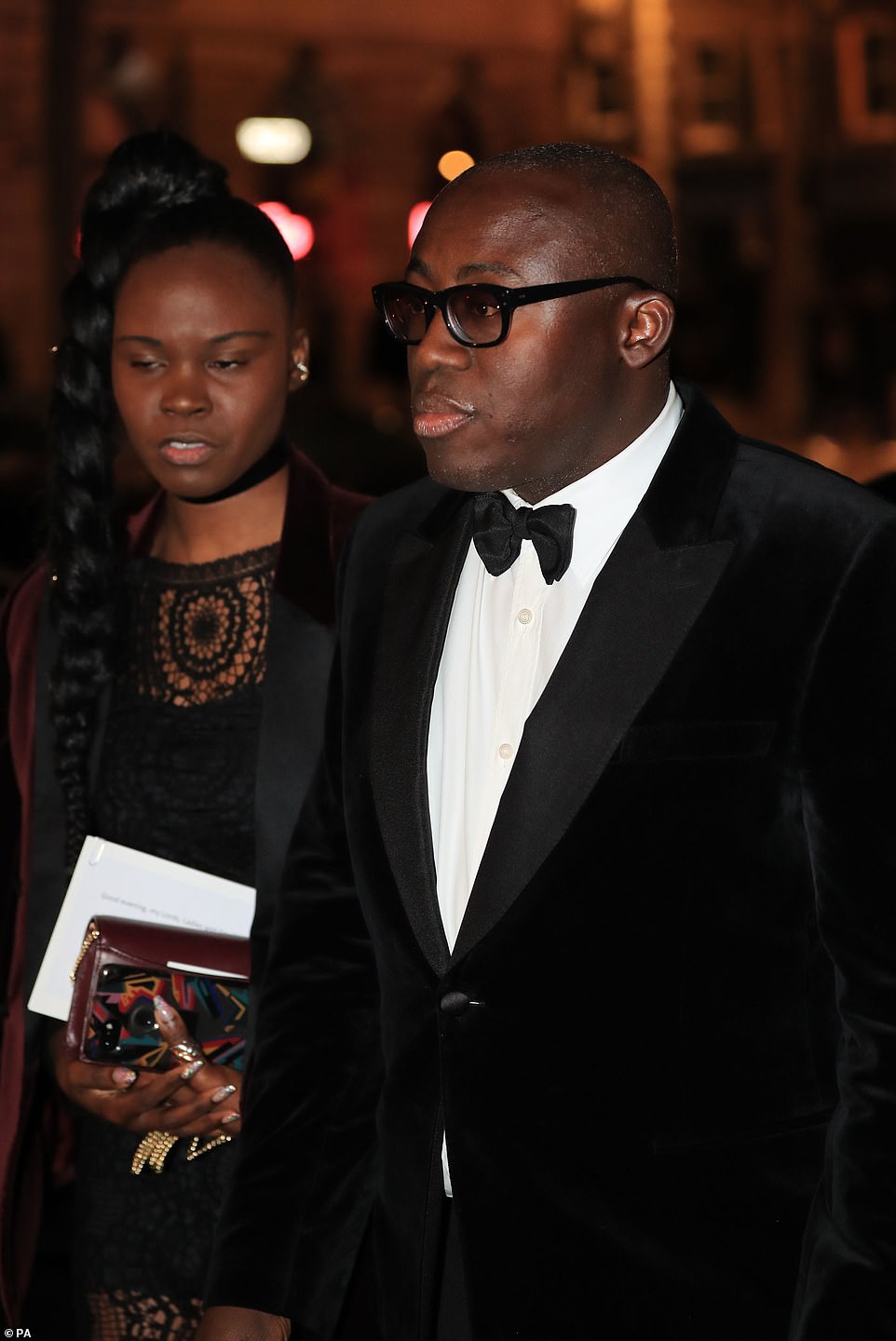 British Vogue editor Edward Enninful arrives for the 2019 Portrait Gala at the National Portrait Gallery in London, joining the likes of the Duchess of Cambridge and Princess Beatrice, who was there with her new boyfriend

She posed for the artist at his studio in Bradford-on-Avon, Wiltshire, followed by another sitting at Kensington Palace in London.  He also worked from a series of photos he took of the duchess.

Kate has been royal patron of the National Portrait Gallery since 2012 and last year she wrote a foreword for its Victorian Giants: The Birth of Art Photography exhibition catalogue, and captions for selected images in the show.

In March 2018 she became the first ever royal patron of the Victoria and Albert Museum in London, a role that reflects her interest in the visual arts, photography, design and textiles.

The Duchess is also a keen photographer, and an Honorary Member of the Royal Photographic Society.

This is the third gala evening that Kate has attended in her role as royal patron of the National Gallery and, as in previous years, the funds raised will help support its work.

When the first official portrait of the Duchess of Cambridge was unveiled at the National Portrait Gallery in 2013, it was greeted with a global eyebrow-raise you could practically hear. 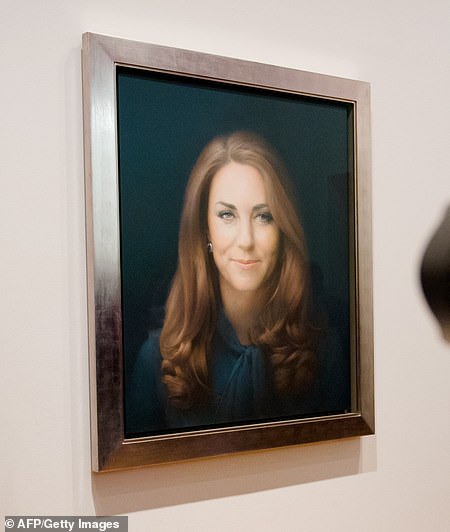 Though Kate herself said Paul Emsley’s likeness of her was ‘amazing’ and ‘brilliant’, and her husband Prince William told the artist it was ‘absolutely beautiful’, critics dismissed it as unflattering, ageing and even ‘rotten’.

Emsley later hit back at his critics, saying the aftermath of its unveiling felt like a ‘witch hunt’, but that there is still ‘nothing he would have changed’ about his painting.

Speaking to Hello! magazine, he said: ‘Some of the words written about it were so personal. I’d be inhuman if I said it didn’t affect me. When you take on commissions like this it is hazardous and you expect a bit of flak, but I expected nothing like the criticism I have received. I didn’t expect it to go to the levels it did.

‘It felt like a bit of a witch hunt and people who have not even seen my portrait joined in with what quickly became a circus. The worst thing is it was not only destructive to me, but particularly upsetting for my two daughters and my wife.’

He added: ‘At first the attacks were so vicious that there was a point where I myself doubted that the portrait of the Duchess was any good. But now, I’ve had time to reflect, I am still happy with it and am getting on with my life. There is nothing I would have changed.’

Emsley said that the praise of the Duke and Duchess meant more to him ‘than anything else said or written’, but that he would urge people to visit the National Portrait Gallery since he felt ‘half the problem is that the portrait doesn’t photograph well’.

According to the gallery, the number of people visiting since the painting went on display on 11 January 2013 rose from 24,000 over that weekend, up from 17,000 the week before.

The Telegraph reported that postcards of the portrait were the fastest-selling item in the history of the gallery’s permanent collection.