Kate Middleton didn’t let the rain dampen her style spirits on Wednesday evening as she stepped out an in all-green ensemble made up of British fashion designs to attend the launch of Prince William’s Earthshot Prize in Boston.

The 40-year-old Princess of Wales continued to fly the flag for British designers for the evening event, which took place amid torrential downpour at Boston’s City Hall.

Kate opted to pay tribute to the theme of the evening – green living – by wearing a plaid green mid-length Burberry dress, which had long sleeves and a pleated waistline, pairing the demure design with a pair of matching $430 heeled pumps from Emmy London and a $1,035 dark green Mulberry bag.

The Prince and Princess of Wales were greeted by Boston Mayor Michelle Wu inside City Hall, where Kate was able to show off her dress, before covering it up with a green Alexander McQueen coat to brave the horrendous rain. 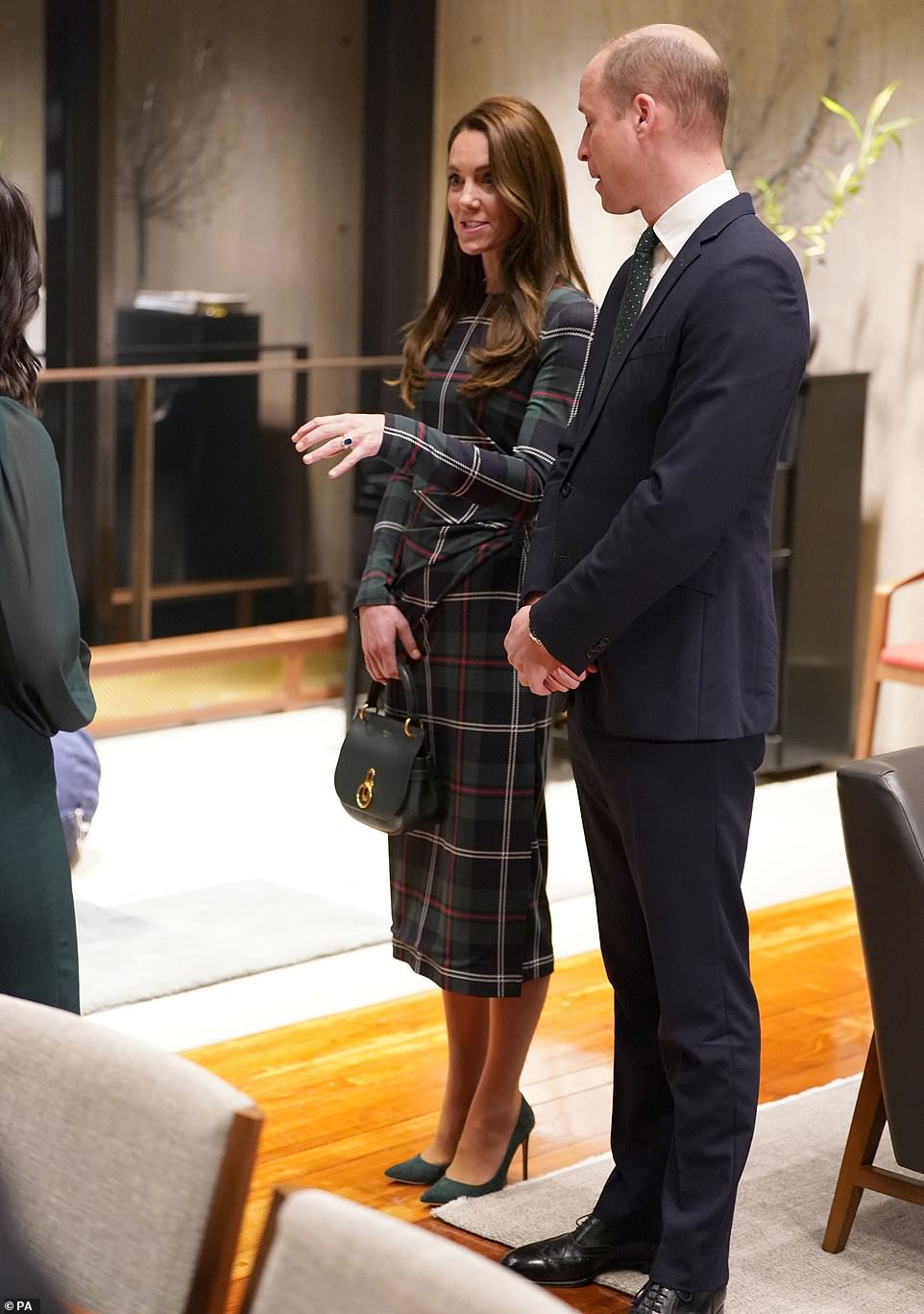 Kate opted to pay tribute to the theme of the evening – green living – by wearing a plaid green Burberry dress, pairing the demure design with a pair of matching $430 heeled pumps from Emmy London and a $1,035 dark green Mulberry bag 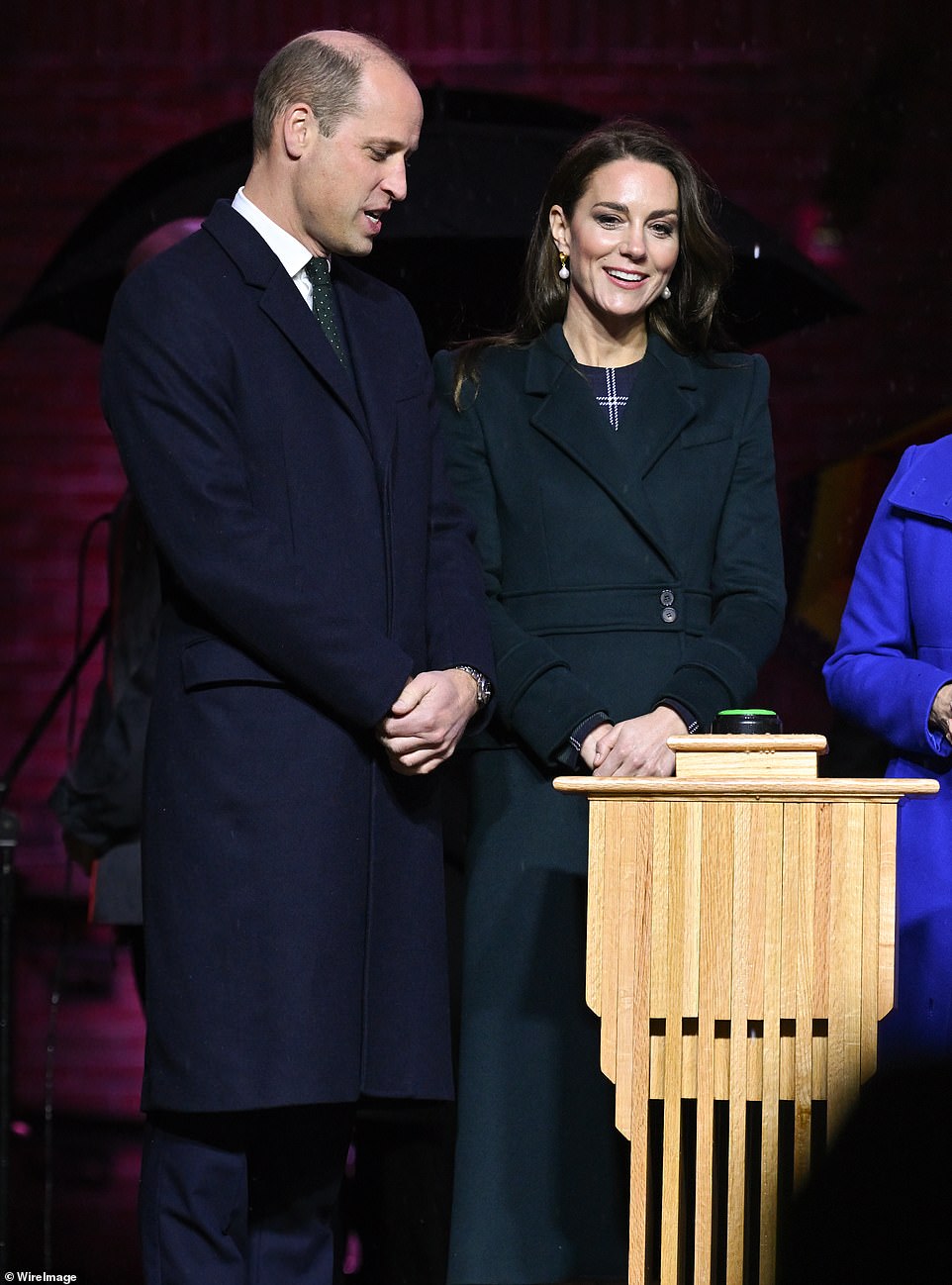 The Prince and Princess of Wales were greeted by Boston Mayor Michelle Wu inside City Hall, where Kate was able to show off her dress, before covering it up with a green Alexander McQueen coat to brave the horrendous rain 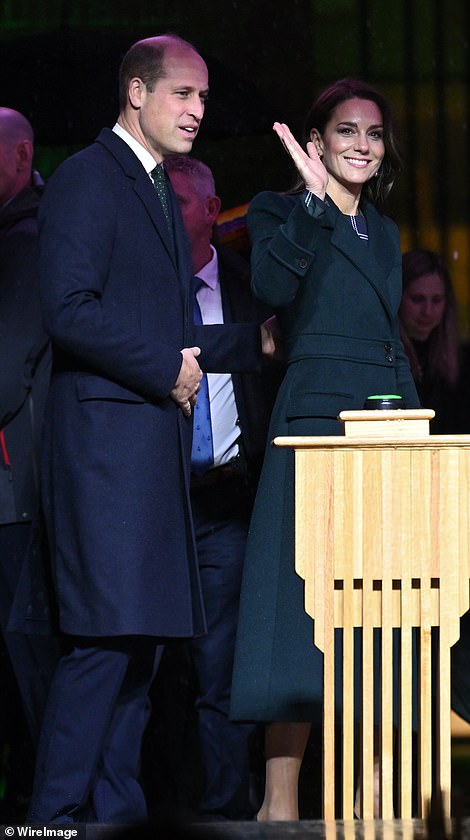 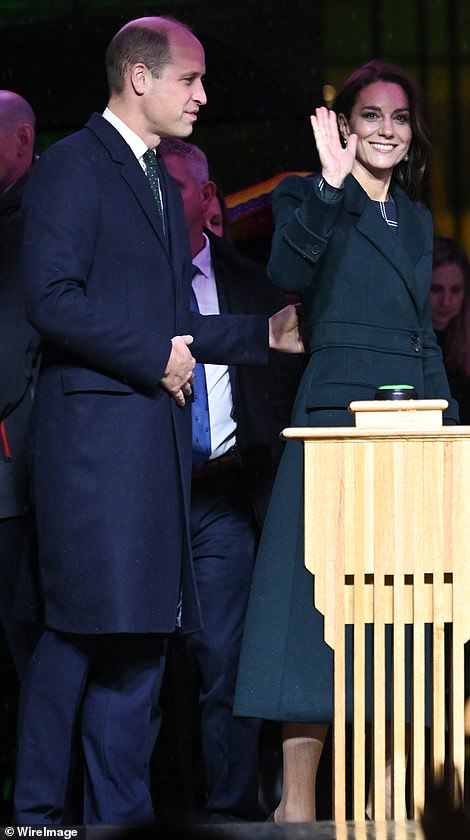 She completed the look with a pair of $85 pearl earrings from sustainable British jewelry brand Shyla London, which – fittingly – ‘prides itself on being ethically motivated’ and strives to combat the pollution and climate change caused by fast fashion.

Alexander McQueen, Burberry, Mulberry, and Emmy London are all brands that Kate has worn multiple times in the past – however it is thought that this is the first time she has been seen sporting a design by Shyla London.

The brand’s messaging is certainly in keeping with the Earthshot Prize’s focus on combating climate change. On its website, it warns of the dangers of fast fashion for the environment, stating: ‘ In a world of fast fashion, consumerism is turning the planet into a sweat shop haven while simultaneously polluting and contributing immensely to climate change.

‘However, by choosing well and buying less you can begin to make a huge difference. Even our beautiful packaging is made from recycled material. We pride ourselves on being ethically motivated.’

The mother-of-three wore her dark brunette locks in loose waves around her shoulders and kept warm with a pair of nude tights.

Wednesday evening’s Earthshot launch saw Kate joining her husband on-stage at City Hall to officially launch this year’s proceedings by pressing a button that lit up 16 Boston landmarks with a green glow.

Her appearance at City Hall came just over an hour after the Prince and Princess of Wales touched down in the US, having taken a commercial British Airways flight from London to Logan International Airport.

Kate made quite the sartorial statement for her first stateside trip in eight years, stepping off the plane and into the terminal in a chic $3,000 midnight blue suit from Alexander McQueen – the same label responsible for designing her wedding gown back in 2011.

She put on an incredibly elegant display in the $2,190 blazer and $890 boot-cut trousers. Underneath the jacket, she wore a knitted turtleneck in a matching color.

She also paid touching tribute to her late mother-in-law Princess Diana by donning a pair of sapphire and diamond earrings that were once owned by the royal.

Diana was seen wearing the two-tiered flower-shaped earrings on several occasions before her death in 1997, including when she attended the Met Gala in New York City in 1996, and during a visit to Canada in 1991.

Now, they’ve been passed down to Kate, who previously wore them back in June when she attended Trooping the Colour as part of the Queen’s birthday celebrations.

For her shoes, Kate opted for a simple pair of blue heeled pumps. She left her long, brown locks in loose waves around her face and seemed in good spirits as she walked alongside her husband.

It was not the first time that Kate has worn something previously owned by Princess Diana. Earlier this month, Kate was seen sporting a feather pendant, which was gifted to Diana by the Queen Mother, as she welcomed South Africa’s President to the UK. 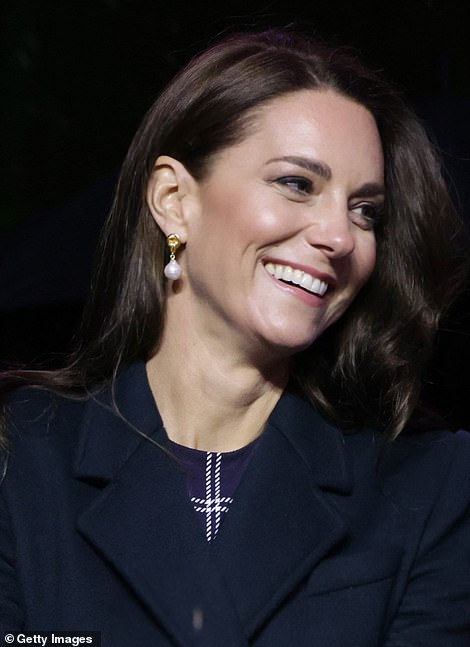 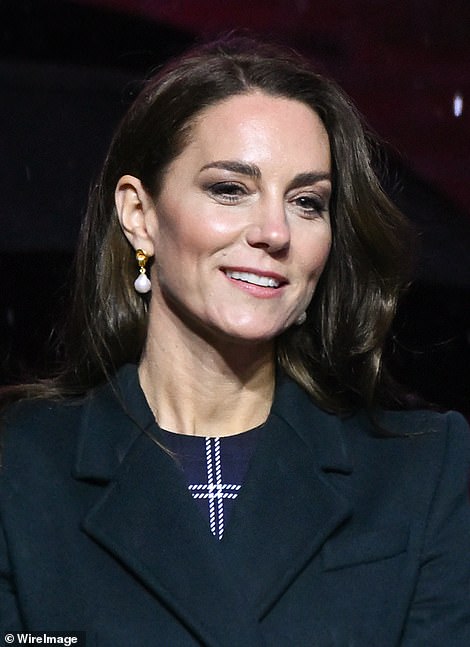 She completed the look with a pair of $85 pearl earrings from sustainable British jewelry brand Shyla London, which – fittingly – ‘prides itself on being ethically motivated’ 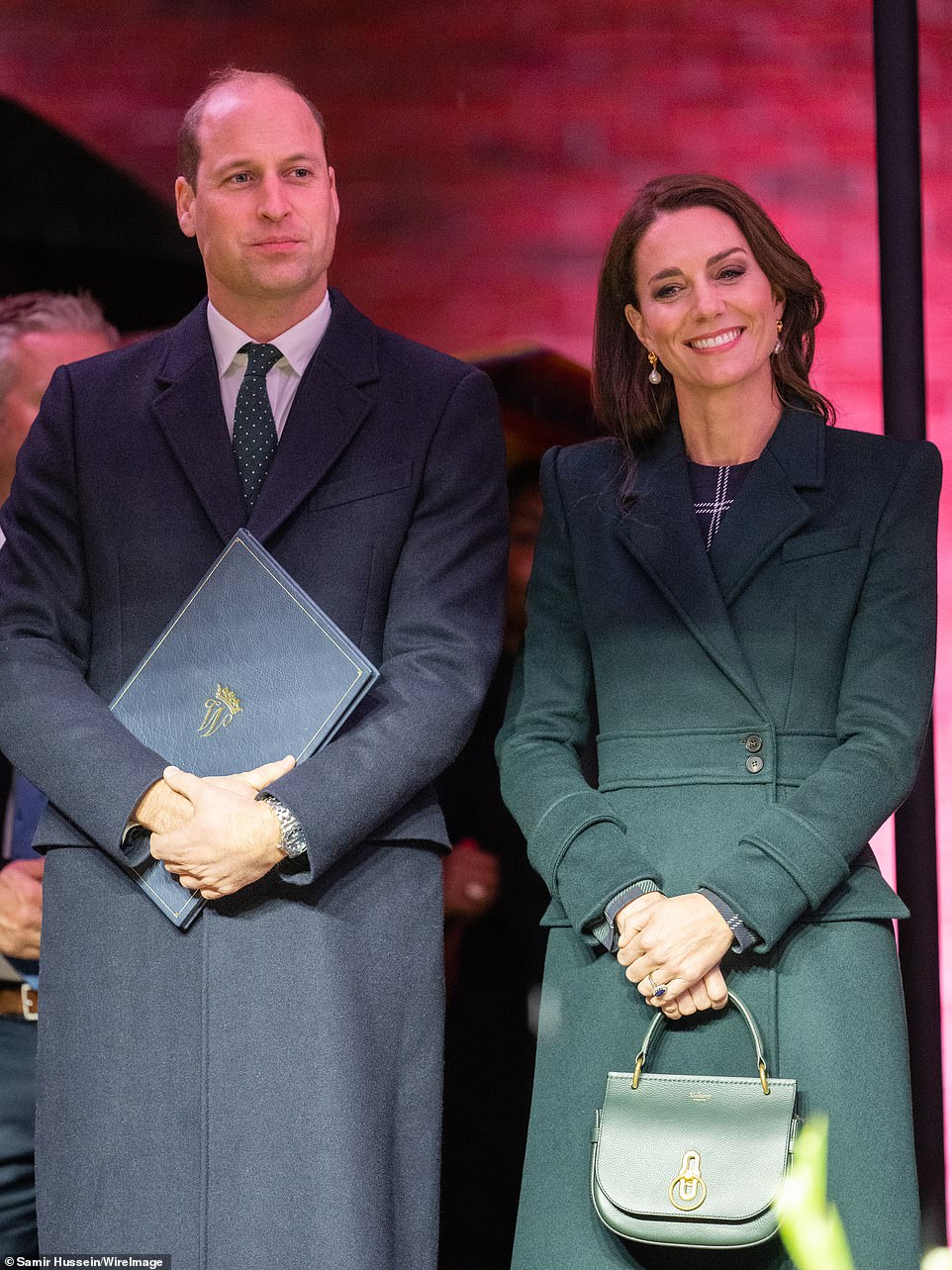 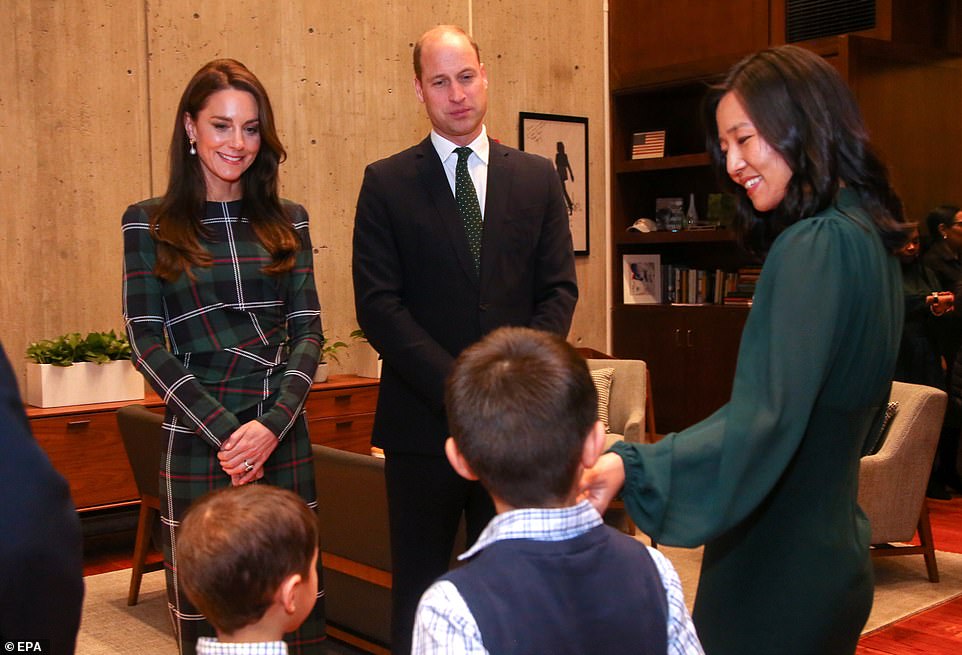 Before the Prince and Princess of Wales stepped out on stage, they spent time chatting with Boston Mayor Michelle Wu and her two sons – with all of the adults opting to add a green element to their outfit, including William who sported a green tie 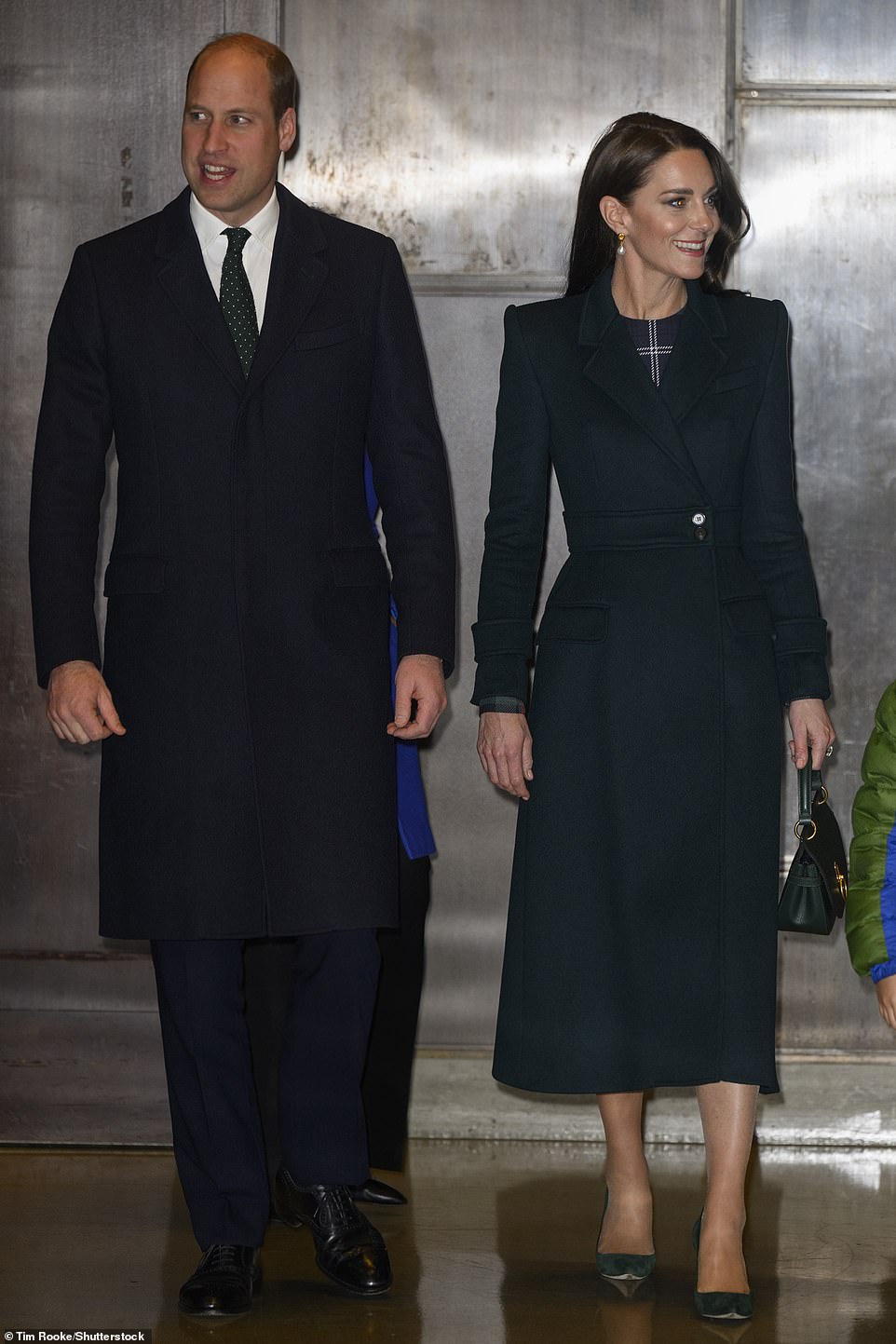 Princess Diana first debuted the brooch as a pendant at the Royal Opera House in 1982. She later wore it during a royal tour of Austria in 1986.

Kate wore another pair of Diana’s earrings in September at the Queen’s procession. The pearl earrings, made by the brand Collingwood, feature a round diamond stud, from which is suspended an additional round diamond and a bell cap set with three more rows of small diamonds. The bell caps each contain a pearl drop.

They became firm favorites of Diana’s, and were sported on royal tours of Australia, Canada, and Italy.

That same month, Kate also wore a pearl bracelet that originally belonged to Diana during a lunch held for governors-general of the Commonwealth nations at Buckingham Palace.

However, while the Princess has not put a fashionable foot wrong since her arrival in the US earlier today, her and William’s first day in Boston has not been without its difficulties.

Their whirlwind three-day tour of the city and its surrounding areas has been marred by a furious royal race row that erupted on Tuesday night, when William’s godmother Lady Susan Hussey – a former lady-in-waiting to the late Queen – was accused of making racist comments to black domestic abuse campaigner Ngozi Fulani at a Buckingham Palace event.

Lady Hussey, 83, quit her role in the royal household on Wednesday after she allegedly refused to believe that Fulani was British and asked her: ‘What part of Africa are you from?’ as they spoke at the event, which was hosted by Queen Consort Camilla.

Even as William and Kate were making their way to Boston, the Prince’s Kensington Palace spokesperson condemned Lady Hussey’s ‘unacceptable’ comments, saying: ‘I want to address the story relating to a guest attending a reception at Buckingham Palace last night.

‘This is a matter for Buckingham Palace but as the Prince of Wales’ spokesperson I appreciate you’re all here and understand you’ll want to ask about it. So let me address it head on.

‘I was really disappointed to hear about the guests experience at Buckingham Palace last night. Obviously, I wasn’t there, but racism has no place in our society. The comments were unacceptable, and it is right that the individual has stepped aside with immediate effect.’

He added that the Prince is ‘aware of the comments’ and ‘thinks the course of action taken is correct’.

However if William and Kate were hoping to put the scandal aside for the duration of the tour, they were met with disappointment at the Earthshot launch, where a black reverend opened the event by giving a lecture about the ‘legacy of colonialism and racism’. 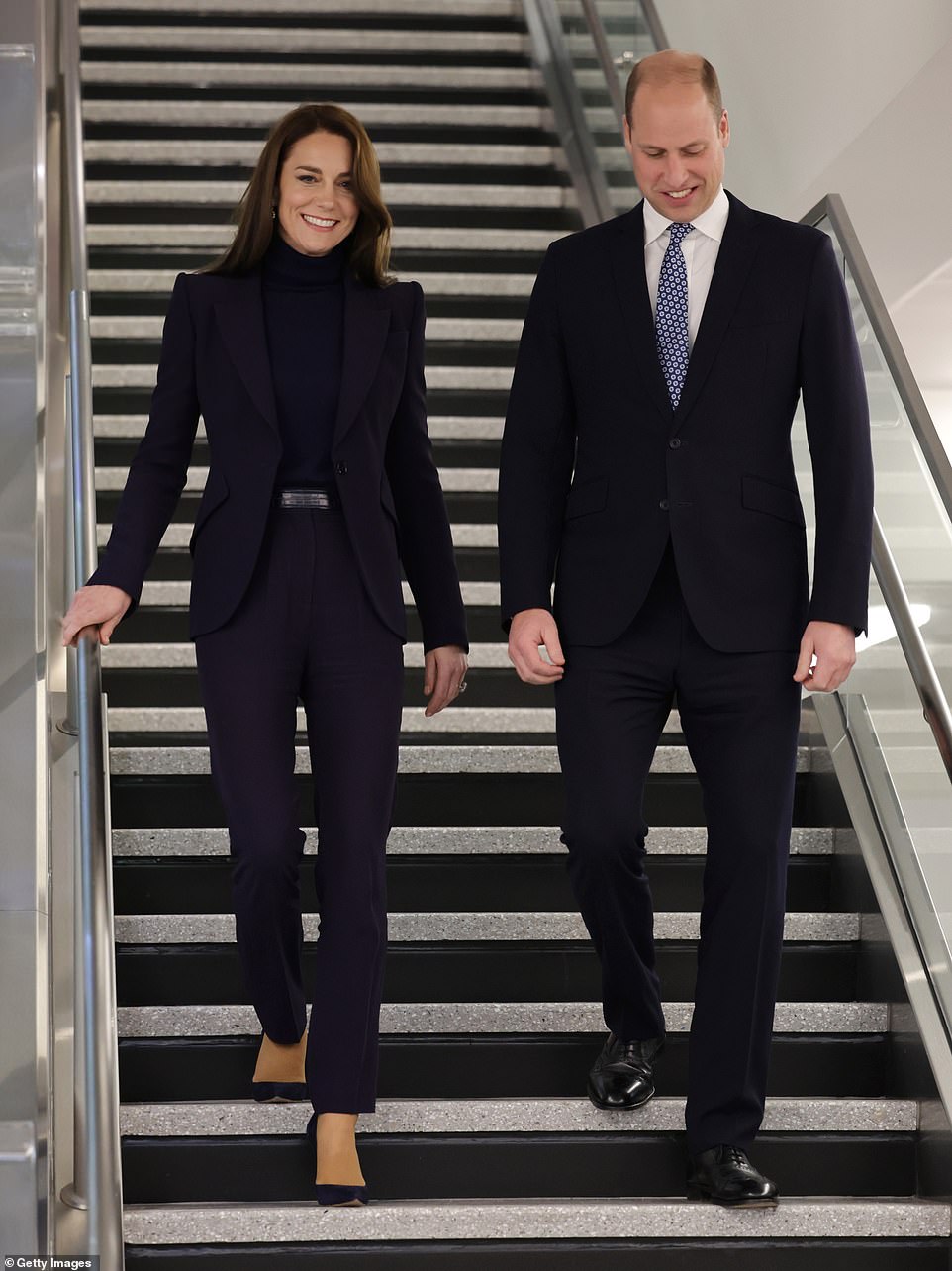 Earlier in the day, the Princess of Wales was pictured arriving at Boston Logan International Airport, once again wearing all British designers, opting for a $3,000 midnight blue suit from Alexander McQueen 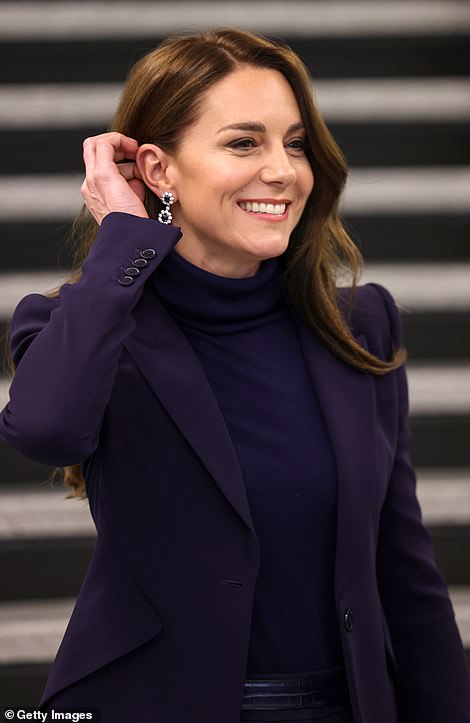 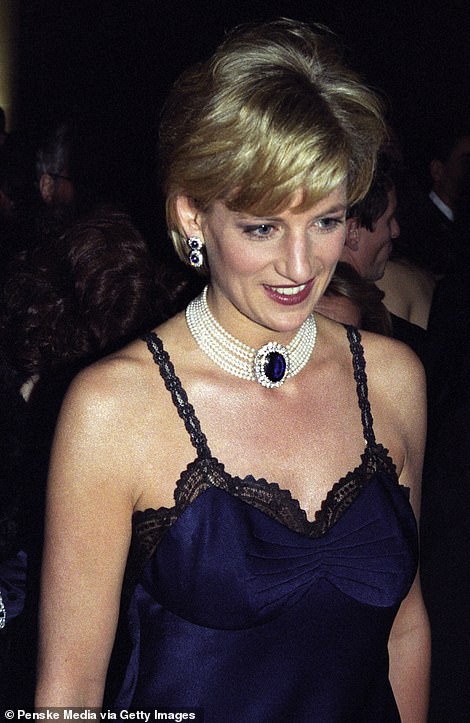 Just minutes before William and Kate took to the podium at the Boston launch event of the Prince’s Earthshot Prize, Reverend Mariama White-Hammond – the city’s Chief of Environment, Energy, and Open Space – gave a strong speech in which she told the crowd to ‘consider the legacy of colonialism and racism’, particularly when it comes to their impact on climate change.

She continued: ‘The ways it has impacted people across the world and its connection, its deep connection to the degradation of land and our planet that we are all seeking to reverse. The stories lost, the species made extinct, but also the persistence of people in the face of oppression and the fundamental dignity of all of our relations.’

Prince William and Kate will no doubt be hoping that the rest of their trip continues without any issues as they prepare to engage in a series of events over the coming two days, including a Boston Celtics basketball game tonight and culminating in a star-studded awards ceremony on Friday.

Singers Billie Eilish and Annie Lennox, and actor Rami Malik will lead a stellar line-up for the Prince of Wales’ Earthshot Prize awards as he and his wife roll out the red carpet stateside this week for what one insider described as the his ‘Super Bowl’ moment.

Before they host their glitzy Earthshot Prize ceremony, the Prince and Princess of Wales will meet with US President Joe Biden, his press secretary revealed today, although she did not share specifics of when or where the meeting will take place.

The President already had plans to be in Boston on the day, however it was initially unclear whether he had plans to meet with the royals.

He and his wife will learn about the work that local organisations are doing to mitigate the risk of rising sea levels in Boston and they will also tour Greentown Labs, in the nearby town of Somerville, to get an insight into the development of innovative green technologies.

They will also spend time at Roca, a non-profit organisation supporting disadvantaged and vulnerable young people.