Kate Middleton channeled her tactile sister-in-law Meghan Markle during a visit to Bradford today as she offered a warm embrace to a royal fan standing in the crowd.

The Duchess of Cambridge, 38, joined her husband Prince William, 37, at the City Hall, and made a beeline for Josh who had been standing in the crowd with his mother Sue, waiting to catch a glimpse of the couple.

The Duchess of Cambridge hugged the boy, who has sensory autism, and told him she had received a wedding and baby cards he had made for her.

Kate was seen chatting with the boy named Josh, holding his hand while they spoke, before she leaned in and offered him a huge hug.

The tactile approach is similar to that taken by sister-in-law Meghan, 38, who is often seen greeting people with hugs on royal visits, despite it contradicting royal protocol.

Kate Middleton, 38, put on an out-of-character tactile display while attending a walkabout at Bradford City Hall, where she was seen hugging Josh, who was waiting in the crowd with his mother Sue 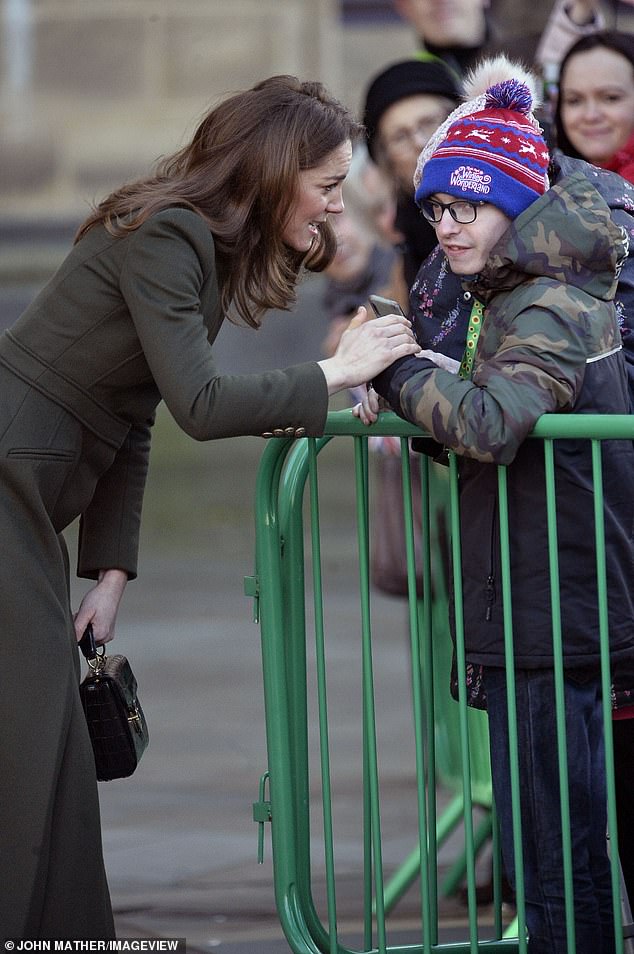 Kate and Prince William are currently undertaking a visit to Bradford and were about to take a tour of the city when the Duchess spotted Josh in the crowd.

The royal made a beeline for the young boy, who was wrapped up warm in a red bobble hat and puffer jacket, before the two shared a warm embrace.

Kate could be seen chatting to Josh, with the royal holding his hand throughout the conversation.

Josh’s mother Sue told MailOnline that they had a short conversation, saying: ‘Kate came over, Josh gave her a hug, they had a little chat.’ 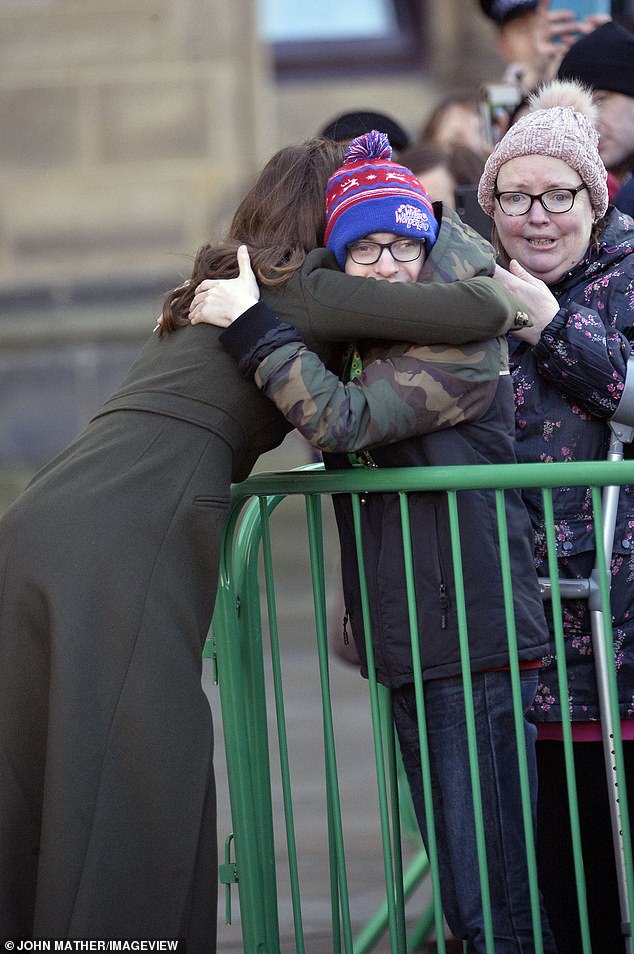 The royal could be seen offering Josh a warm embrace, in a move that reflected sister-in-law Meghan Markle’s, 38, tactile approach

She said Josh asked the Duchess if she and William had got the wedding cards and baby cards he had made for them, and Kate said ‘Yes’.

Sue added: ‘Josh has autism so she was lovely and took her time chatting.’

Josh has previously been pictured with a raft of celebrities, from Robbie Williams to Harry Styles and Ross Kemp to Tom Daley.

He was also once photographed with Sophie, Countess of Wessex.

The Duchess of Sussex is often tactile while undertaking royal visits (pictured, hugging designer Misha Nonoo at the launch of the Smart Works capsule collection at John Lewis in Oxford Street, London)

The move is different for the Duchess of Cambridge, who often offers the more traditional handshake on royal visits, and is similar to that used by Meghan on royal visits.

The Duchess of Sussex has become somewhat known for her tactile approach while making royal appearances.

In September, during the launch of her Smart Set collection with patronage Smart Works, Meghan was seen offering hugs to many of those in attendance.

And in October, Meghan clashed with the organiser of the One World Summit when she performed a respectful curtsy while the Duchess caught her off guard by trying to offer a more informal hug. 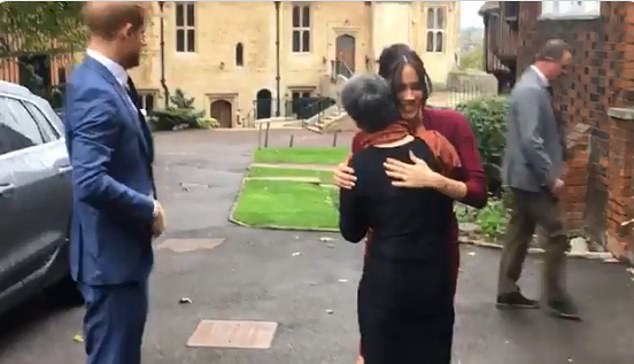 And in November, Meghan threw her arms out in favour of a hug (pictured) rather than curtsy as she arrived at Windsor Castle alongside husband Prince Harry, 35, 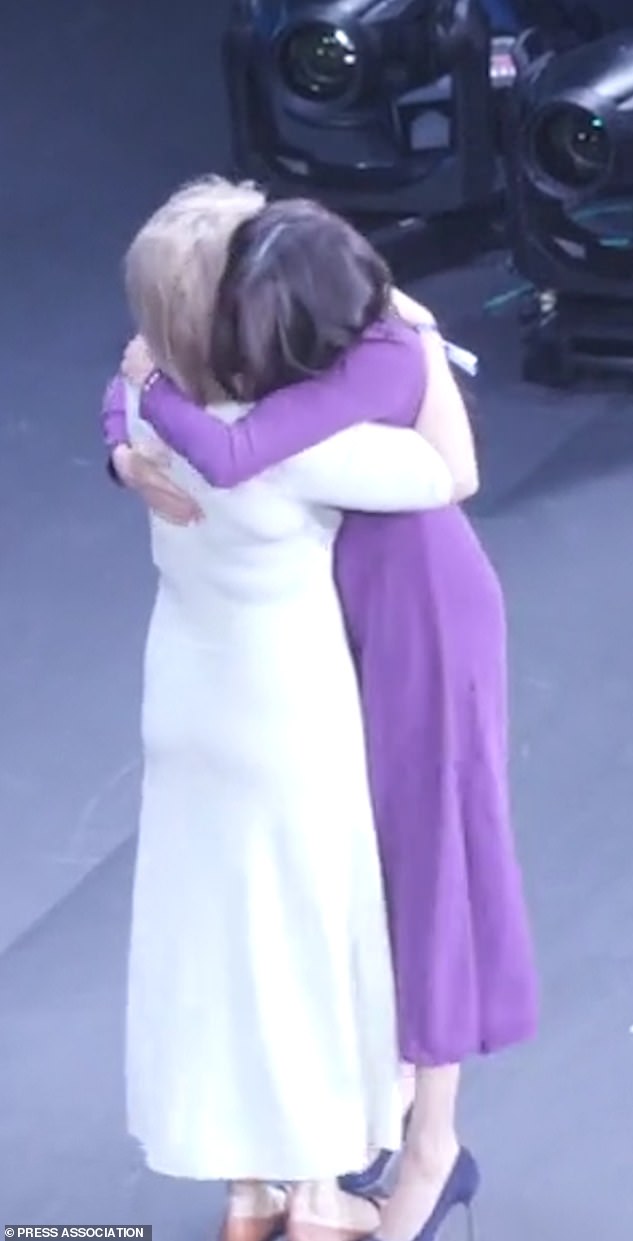 Days later, she offered another enormous hug to an organiser while attending a round-table discussion on gender equality with The Queen’s Commonwealth Trust (QCT) and One Young World.

There are no obligatory rules on greeting the Queen or her family members, but tradition dictates that men may wish to bow their heads while women perform a small curtsy. A handshake is also perfectly acceptable, but hugging is not customary.

Last year, former butler to Prince Charles, Grant Harrold, suggested Meghan was ‘showing that the British royal family is a modern 21st-century family’ and ‘carrying on Diana’s tradition’ by hugging children and adults.

Meanwhile etiquette expert William Hanson revealed that American-raised Meghan would see using a hug as a form of greeting as common practice. ‘Meghan, being American, will be used to greeting with a hug as a standard greeting as that seems to be the norm in the US,’ William said.

‘However some Americans can interpret this as coldness, whereas some Brits would interpret a hug from a near stranger as insincere.’

During today’s visit, Prince William and Kate will take a tour of the city as they visit a community project that aims to strengthen bonds between grandparents and grandchildren. 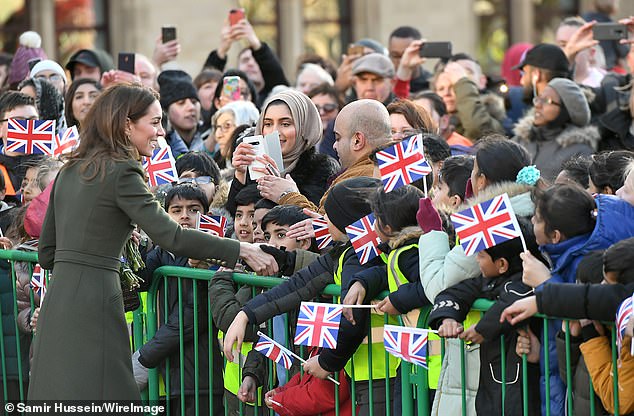 They will meet families from the Older Yet Wiser project – a workshop series helping grandparents to enhance their relationship with their grandchildren and giving them information about raising children in the 21st century.

While in West Yorkshire, William and Kate will also visit young people, employers and families at a series of projects that promote cohesion within what is one of Britain’s most diverse cities.

Today was the couple’s first joint public engagement together since a charity event in London two months ago on November 12 for their volunteer text support service Shout.