Kate Middleton is ‘very much a future queen in the making’ but  ‘still struggles to mix with world leaders such as the Bidens’ because she’s a ‘natural introvert’, a close friend has claimed ahead of her 40th birthday.

The Duchess of Cambridge, who will celebrate turning the milestone age on Sunday, grew on the world stage in 2021 taking on solo projects such as Hold Still and the Westminster Abbey Christmas Carol service.

And her job involves mixing with high profile figures on the world stage, such as visiting a school with Dr Jill Biden during the G7 summit in June last year.

But her presence is still ‘understated’ her friend told Hello! adding that she is ‘quietly growing in confidence’ 10 years after marrying into the royal family.

‘She still finds it quite challenging to mix with those sorts of players [the Bidens], because she’s a natural introvert. But she’s really growing into the role,’ her friend said.

Kate Middleton is ‘very much a future queen in the making’ but ‘still struggles to mix with world leaders such as the Bidens’ because she’s a ‘natural introvert’, a close friend has claimed ahead of her 40th birthday. She is pictured with Jill Biden in June in Cornwall 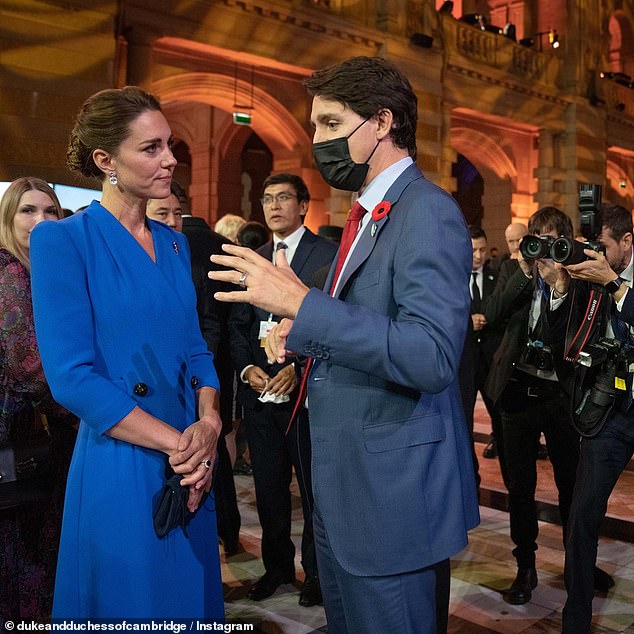 In November Kate chatted to Justin Trudeau (pictured together), Angela Merkel and other world leaders during the COP26 summit and Earthshot awards.

‘[Public speaking] is not something that she relishes doing, at all. She’s not a put yourself out there, extroverted type of person, it’s just not who she is. But she knows it’s an important way for her to make a positive contribution and there are some times that you need to get out there and speak for things you believe in.”

The future Queen, who lives at Kensington Palace in London, mingled with many world leaders as she attended COP26 in Glasgow and the G7 summit in Cornwall in 2021.

In June, she met with First Lady Jill Biden, 70, at the Connor Downs Academy near Camborne to meet with school children before hosting a round table discussion with UK education experts.

While in November she chatted to Justin Trudeau, Angela Merkel and other world leaders during the COP26 summit and Earthshot awards.

It comes amid reports  the Duchess of Cambridge’s 40th birthday celebrations will be muted – much like her Christmas was – due to the growing Covid risk.

Instead of a big party, the Duchess is expected to have a much smaller affair with just family and close friends. 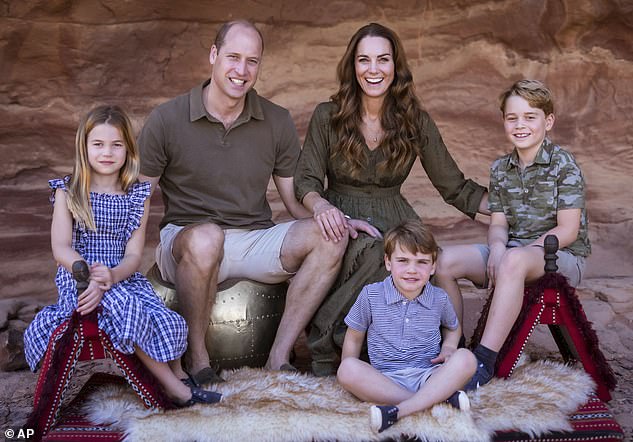 Describing how December 25th went for the royal family-of-five (pictured), an insider told the magazine that Prince George, eight, Princess Charlotte, six, and Prince Louis, three, woke up at 5am to check whether Father Christmas had visited their Norfolk home of Anmer Hall overnight

Kate and William – who on Friday unveiled a photograph of themselves on the way to last year’s James Bond premiere to coincide with New Year’s Eve – missed out on the traditional Royal Family Christmas celebrations after the Queen was forced to cancel her plans to host the festivities at Sandringham.

Due to fears of the Omicron Covid variant, a smaller lunch was held at Windsor Castle while the Cambridges hosted Kate’s family at Anmer Hall, their country retreat on the Sandringham estate

A source told Mail on Sunday: ‘There are likely to be low-key celebrations for the Duchess. She didn’t want anything flashy anyway – that’s not exactly her thing – but particularly given the current climate anything is likely to be scaled down.’

Describing how Christmas day was for the family-of-five, an insider told US Weekly that  Prince George, eight, Princess Charlotte, six, and Prince Louis, three, woke up at 5am to check whether Santa Claus had visited overnight.

‘While Kate and William avoid overly spoiling the children, they let the rule slide at Christmas,’ the source claimed.

George reportedly received a camping kit – including a tent, walkie-talkies and a flashlight – while Louis was given a climbing frame and Charlotte was treated to a children’s video camera. They also opened several games and books.

The Duke of Cambridge, 39, treated his wife to a ‘beautiful bracelet’ because he wanted to ‘make this Christmas extra special’, said the source.