Competitive Kate Middleton was in her element as she and Prince William went head-to-head in a land yacht race in St Andrews today.

The Duchess of Cambridge, 39, beamed as she steered the wind-powered go-kart down West Sands Beach – just a short drive from the university where she and William met as students 20 years ago.

Kate, who was dressed down in her favourite £159 Longshore Barbour jacket, £310 See by Chloe boots and a £115 Campbell’s of Beauly Fairisle Jumper, appeared unfazed by the strong winds and wet weather, and beamed as she shot past her husband.

At one point the Duchess’s back wheel was lifted into the air by the force of the wind – but not even that was enough to stop Kate from smiling.

There she blows! The Duchess of Cambridge had her land yachting kart lifted off the sand in a safety demonstration 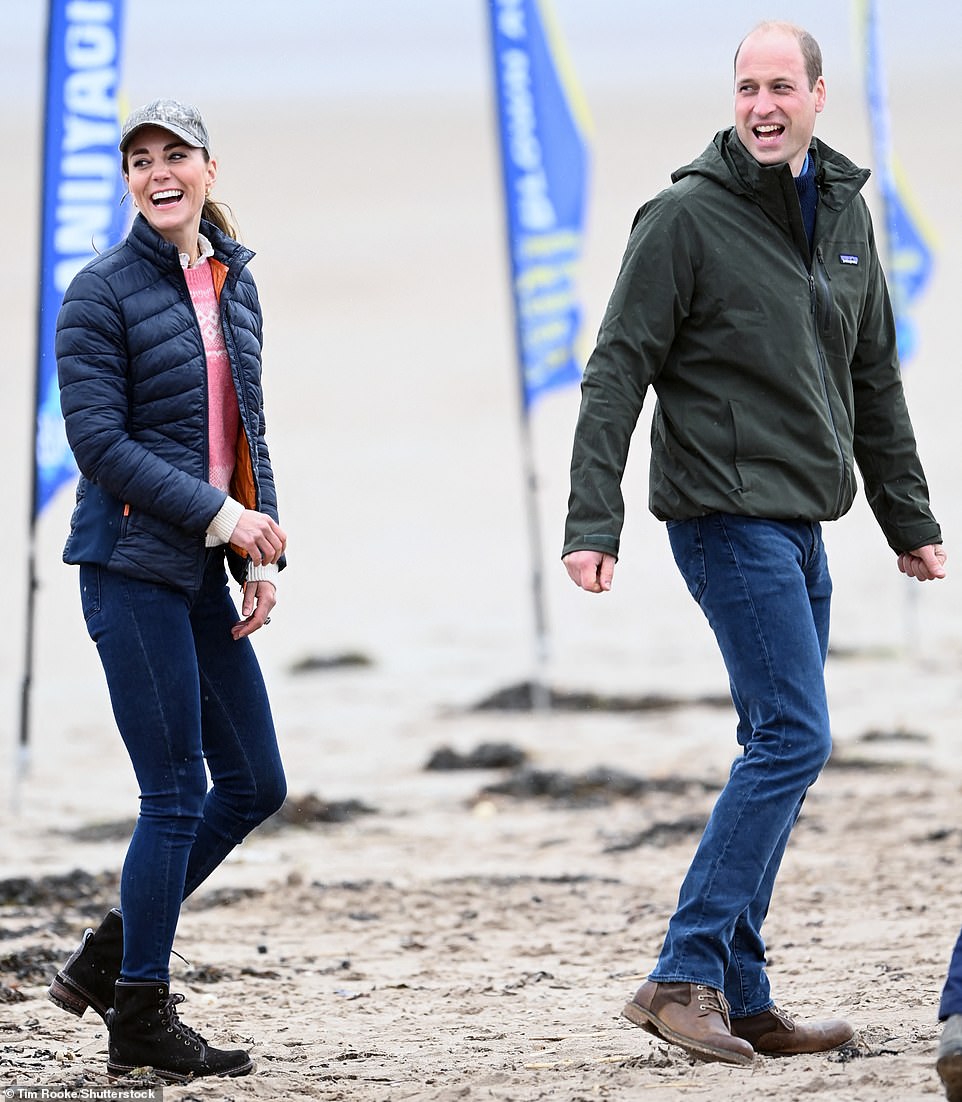 Thrilled: The couple beamed as they crossed West Sands Beach, St Andrews, despite the bad weather 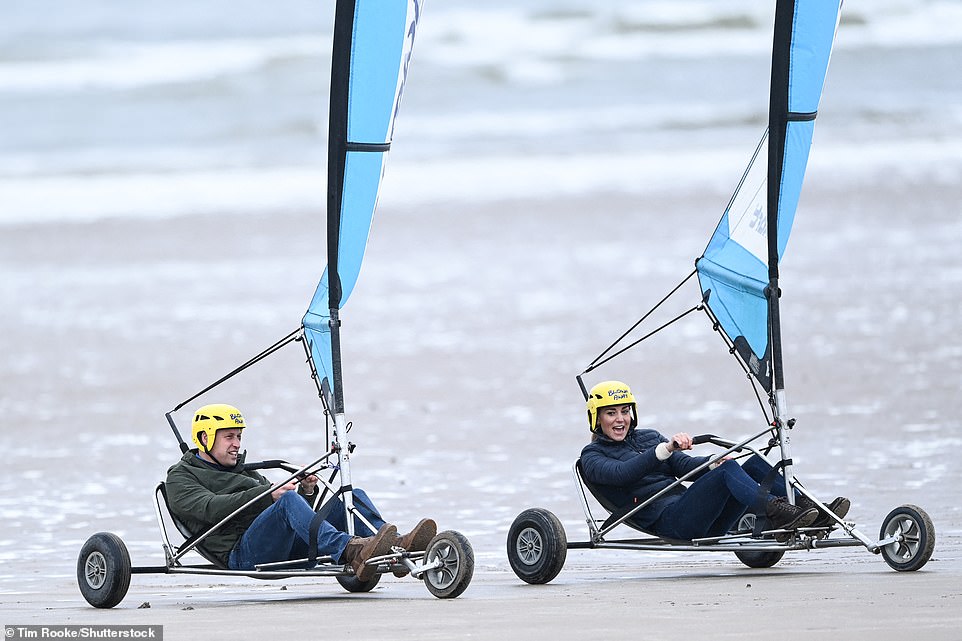 Head-to-head: Duke and Duchess of Cambridge sailed down the sand at West Sands Beach, St Andrews, this morning 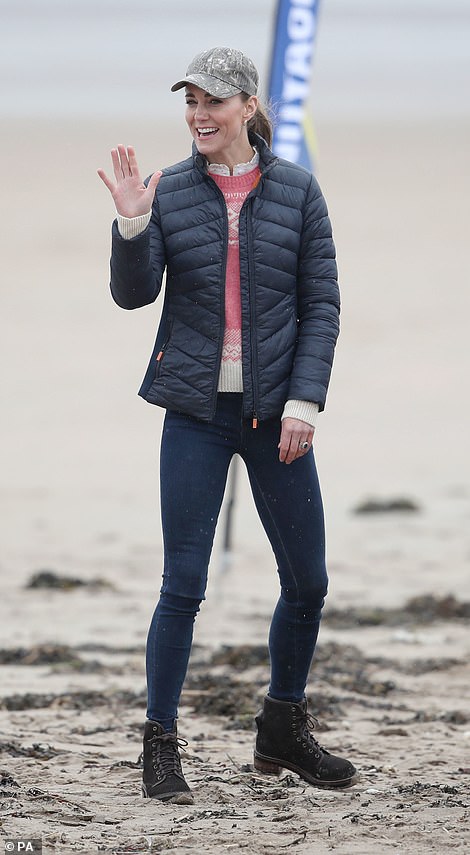 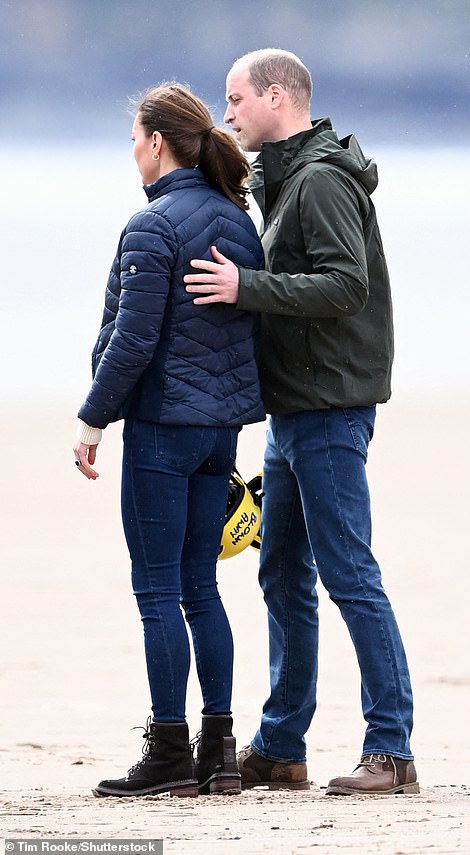 Casual Kate: The Duke and Duchess of Cambridge dressed down in jeans, jackets and boots for the land yachting session. At one point Prince William placed a hand on his wife’s back (right) 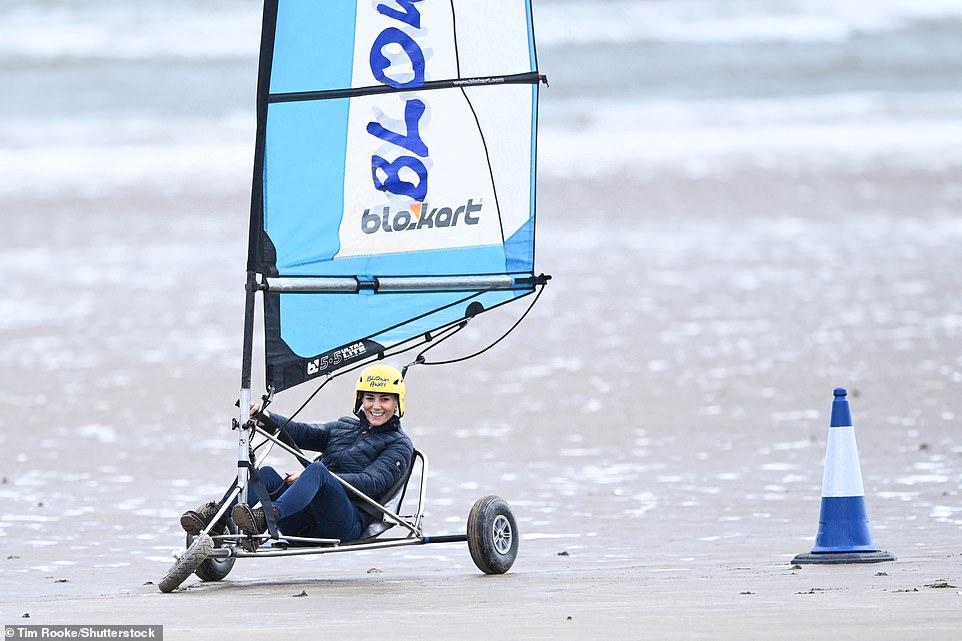 And she’s off! Competitive Kate was in her element as she took on her husband in the land yacht race on the blustery beach 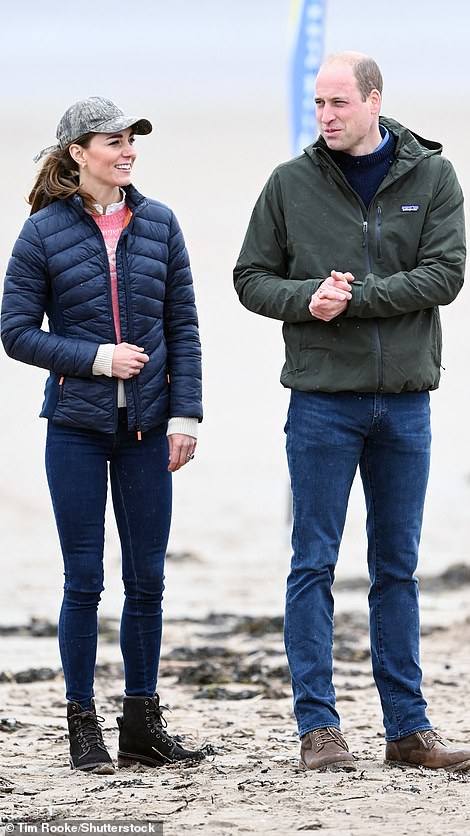 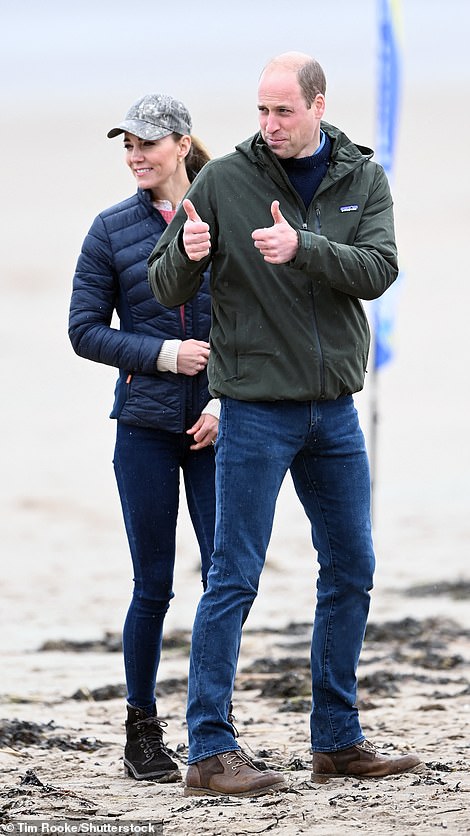 All good! Smiling Kate waved at the young carers who joined them in the session. Right, Will gives them a thumbs up 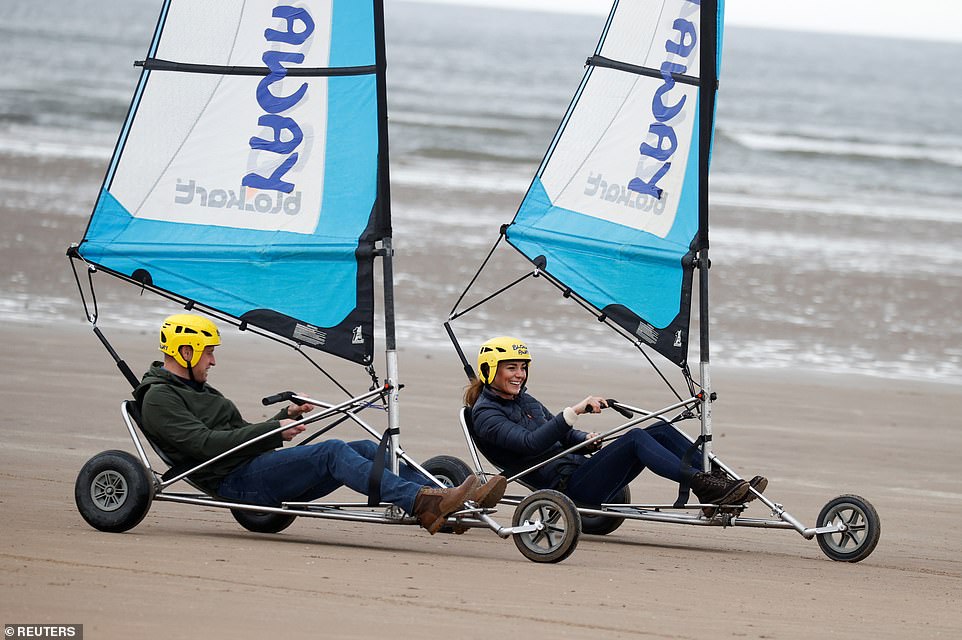 Pulling ahead! The Duchess of Cambridge beamed as she overtook her husband in their land yachting race 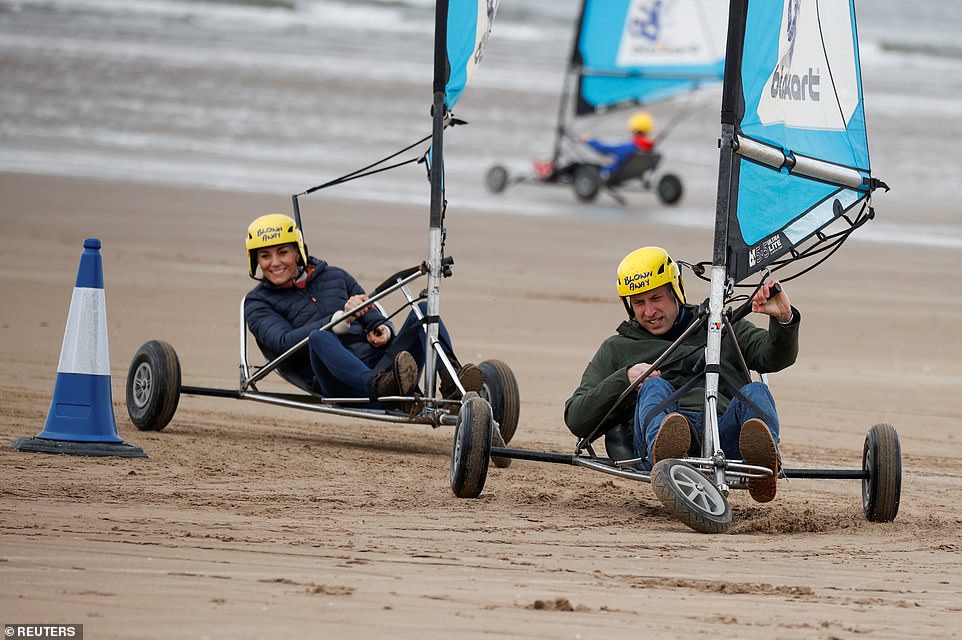 … Wills takes the lead! The Duke of Cambridge had his game face on as he edged in front of Kate on the sandy course 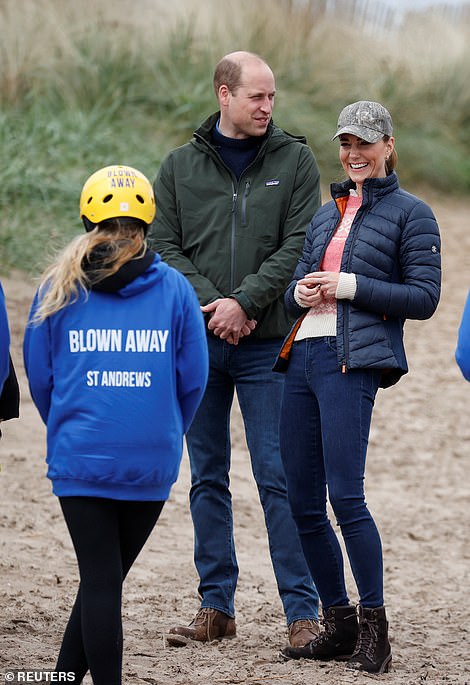 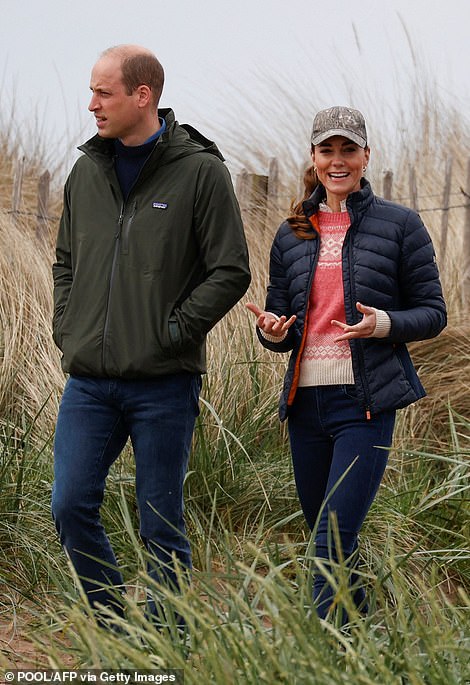 Sharing a joke: The Duke and Duchess of Cambridge met young carers living around Fife and workers from Blown Away 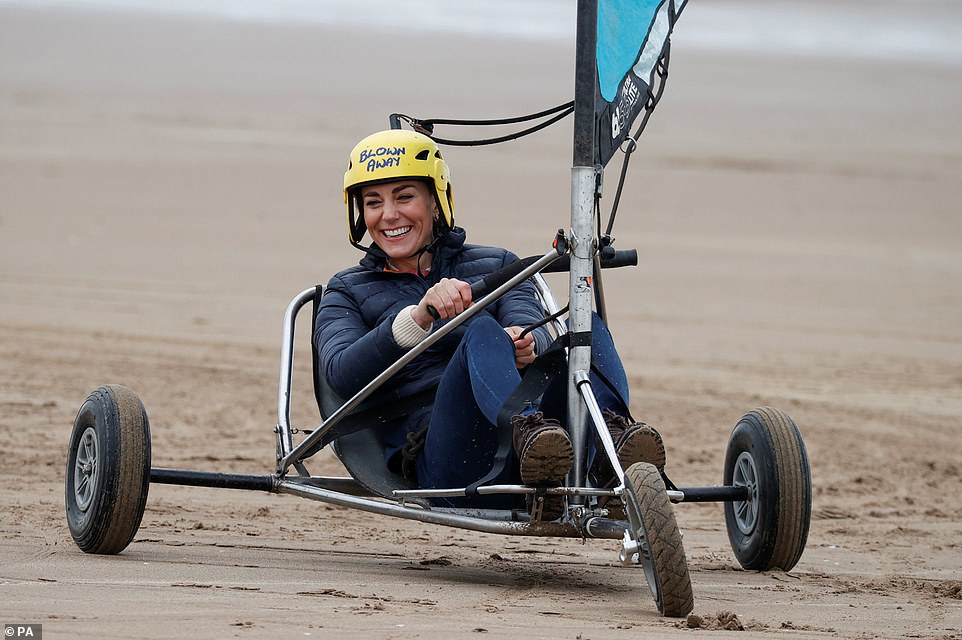 In her element: Sporty Kate was thrilled to get involved in the activity on West Sands Beach, at St Andrews

The royal couple were joined by a group from Fife Young Carers, which helps young carers maintain their well-being through a range of outdoor activities, workshops, and residential trips.

The Duke and Duchess of Cambridge spoke to young carers about the challenges they have faced during the pandemic.

The Duke and Duchess also heard about the charity’s work to raise awareness of the role of young carers in the local area, including introducing a ‘Young Carers Authorisation Card’ scheme in schools, pharmacies and other medical settings.

The card helps young carers easily identify themselves, without having to repeatedly outline their circumstances and personal stories to those in the local community.

The session was hosted by Blown Away, a local company who are the only commercial land yachting company in Scotland, and host sessions in St Andrews and other iconic Scottish locations.

The Duke and Duchess of Cambridge travelled to St Andrews from the Palace of Holyroodhouse, in Edinburgh, where they are staying while on their week-long tour of Scotland. The couple will return to London tomorrow.

Challenge accepted: The Duchess of Cambridge beamed at Prince William as they prepared to set off on their land yachts 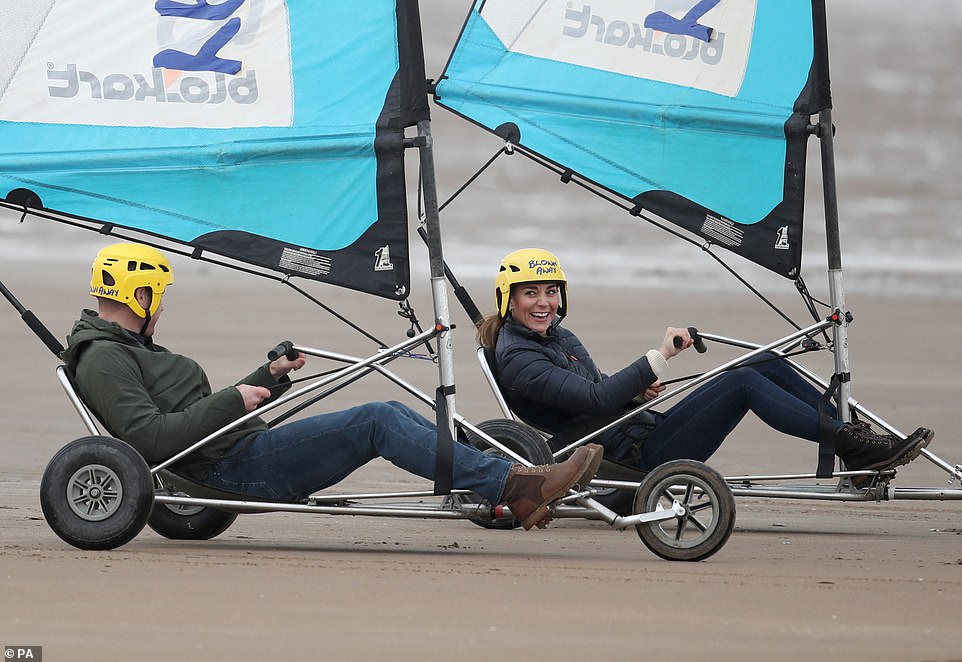 Catch me if you can! Kate beamed as she pulled ahead of Prince William during the land yachting challenge 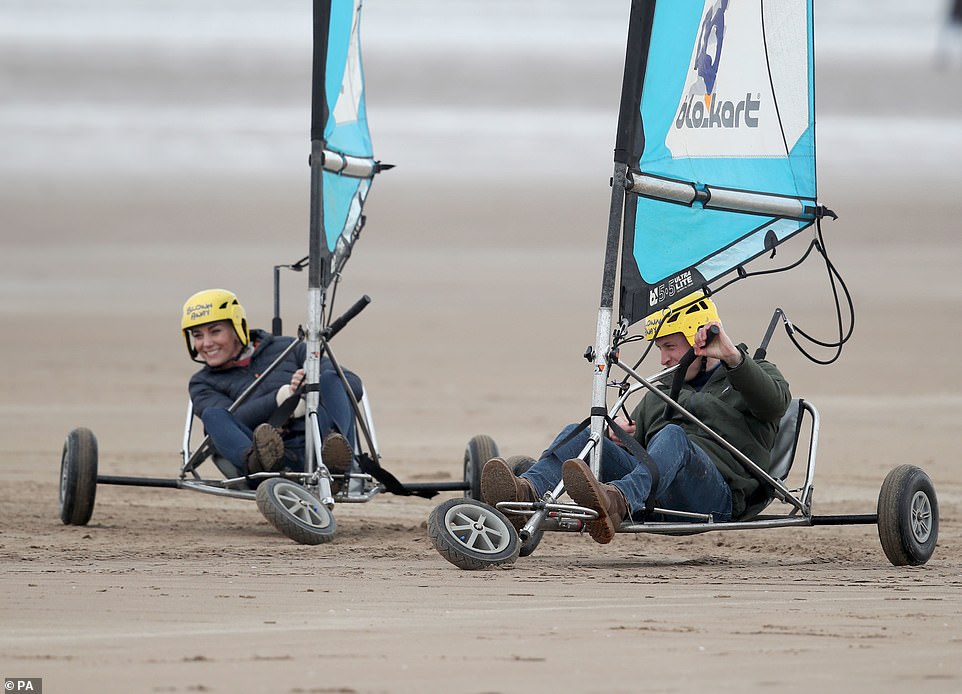 Ready to race! Competitive Kate looked in her element as she and Prince William tried their hand at land yachting 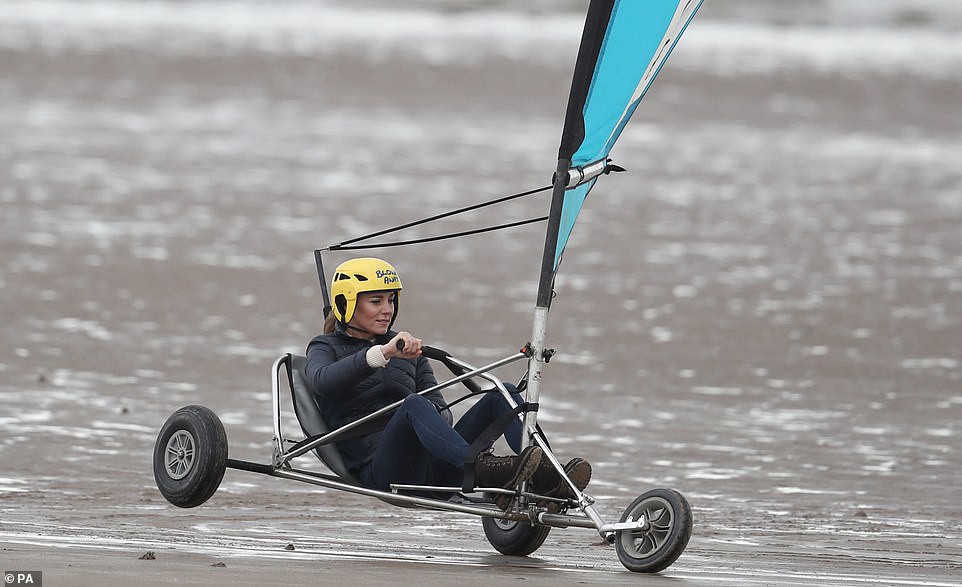 Blustery day: At one point the Duchess of Cambridge’s back wheel lifted off the sand as she turned 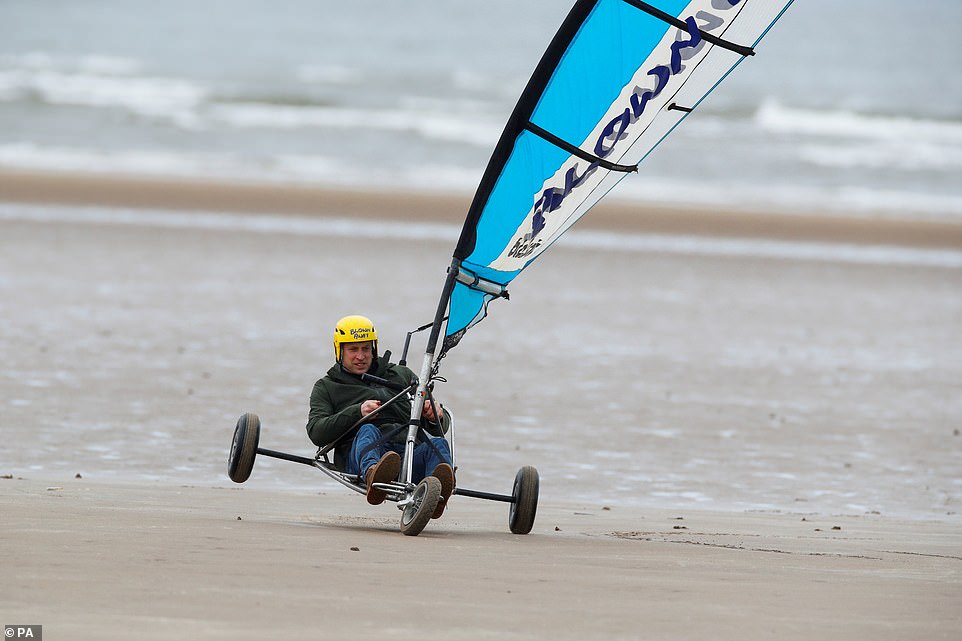 Keeping control: The Duke of Cambridge remained calm as the kart was almost blown over by a gust of wind 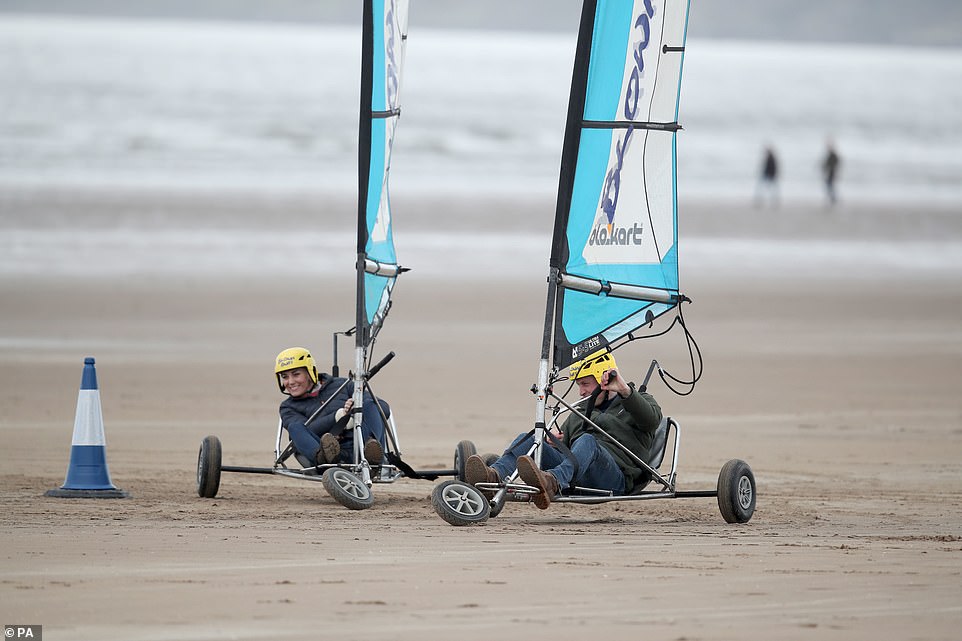 Tight corner: The couple were challenged with steering the wind-powered vehicles through a series of cones 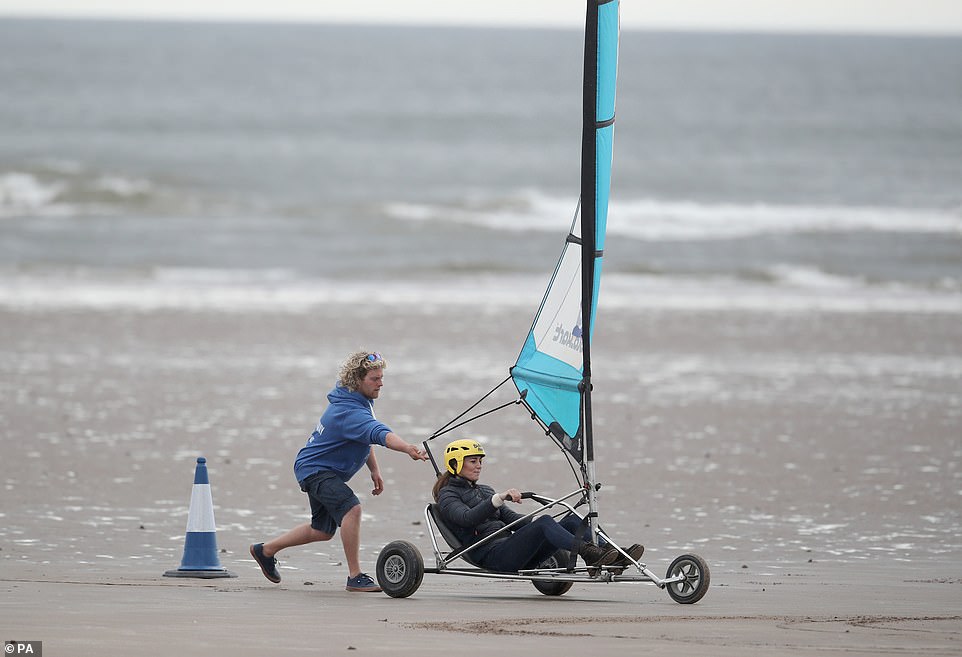 Concentration: Kate had her game face on as she set off on her land yacht for the friendly race on West Sands Beach 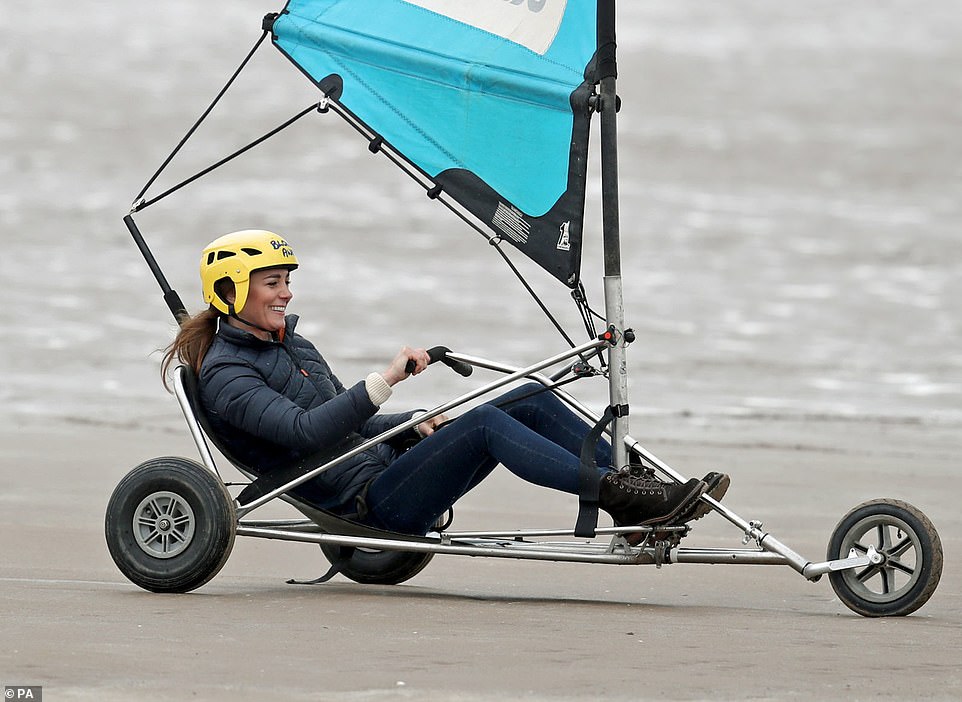 Getting the hang of things: The Duchess of Cambridge smiled as she set off down the beach in the land yacht 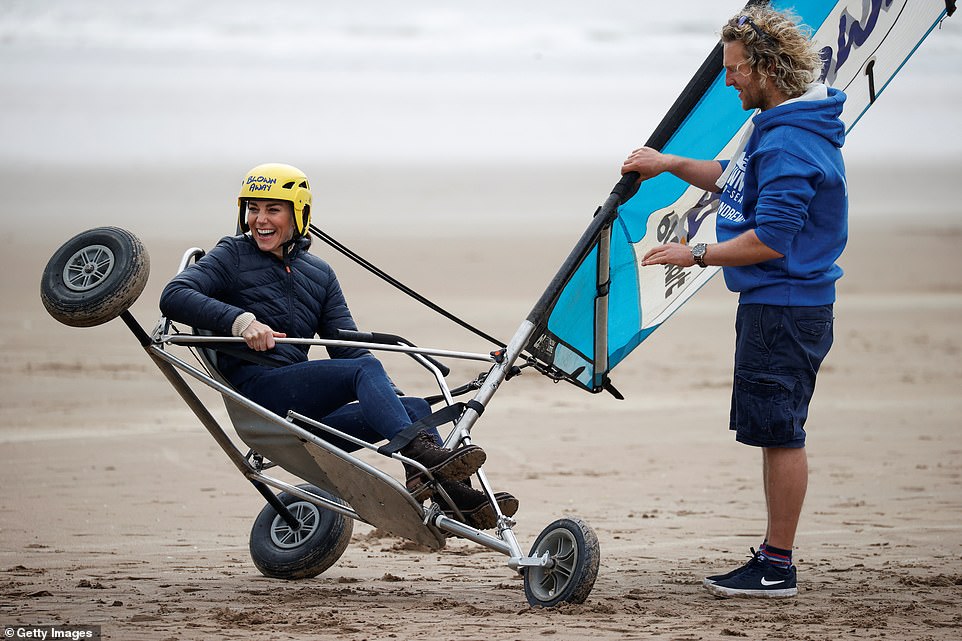 Don’t topple over! Kate Middleton laughed as the instructor lifted up the Duchess in the safety demonstration 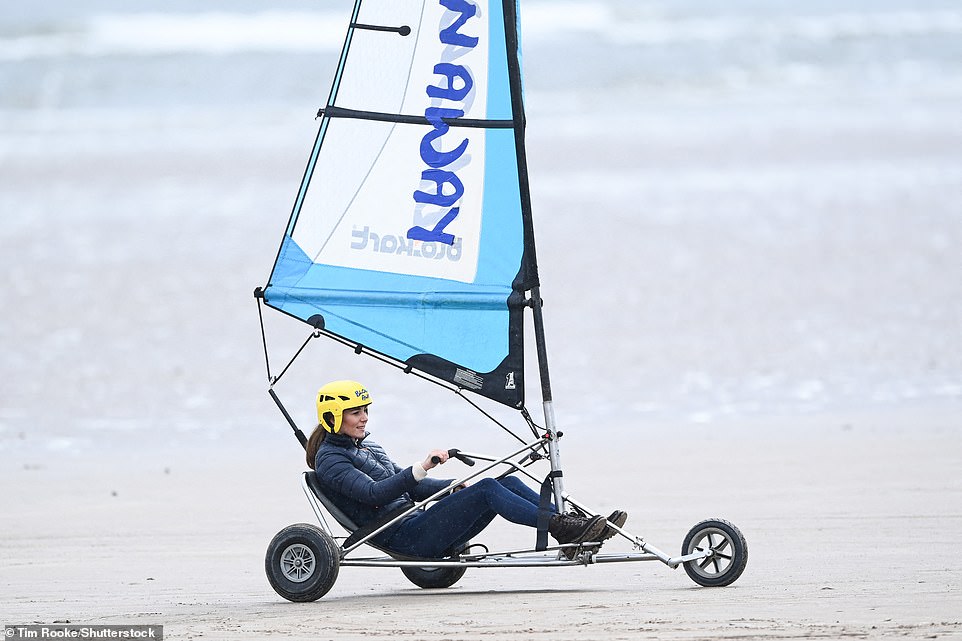 Gone with the wind… The Duchess of Cambridge sped down the beach, which is close to St Andrews University 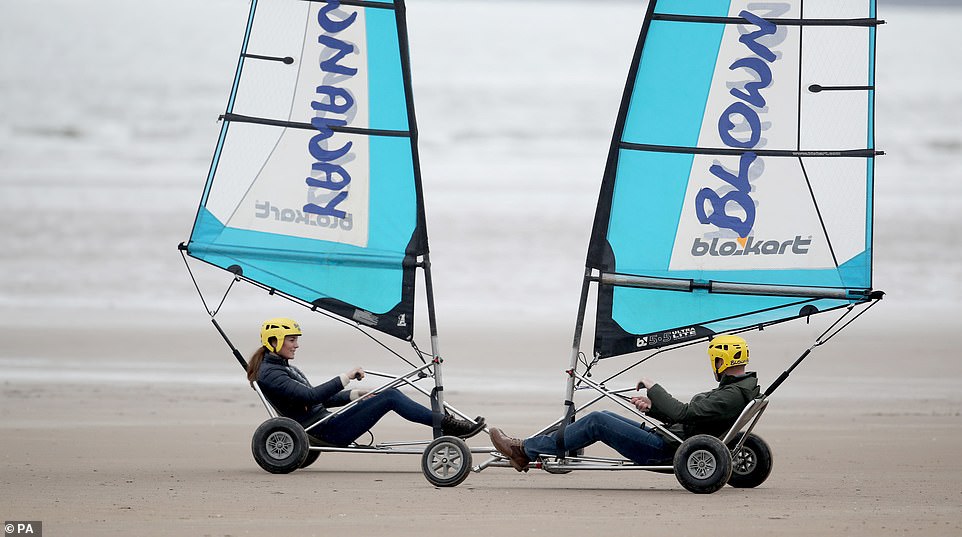 Getting close! The Duke and Duchess of Cambridge both tried their hand at the activity in St Andrews today

Which way are you going? The Duke and Duchess of Cambridge headed off in opposite directions on their land yachts

Yesterday William and Kate spent several hours in Orkney, opening a new hospital in Kirkwall and visiting a marine turbine machine. They also stopped at the home of a local family, the Bichans, to hear more about life in Orkney over a cup of tea.

The visit is part of a broader royal charm offensive to help persuade Scotland to resist the demands of nationalists for independence.

Prince William arrived in Scotland on Friday and has carried out a number of engagements focused on the environment, young people and mental well-being.

The Duchess of Cambridge joined her husband on Monday and the pair have continued with a busy schedule of royal engagements. 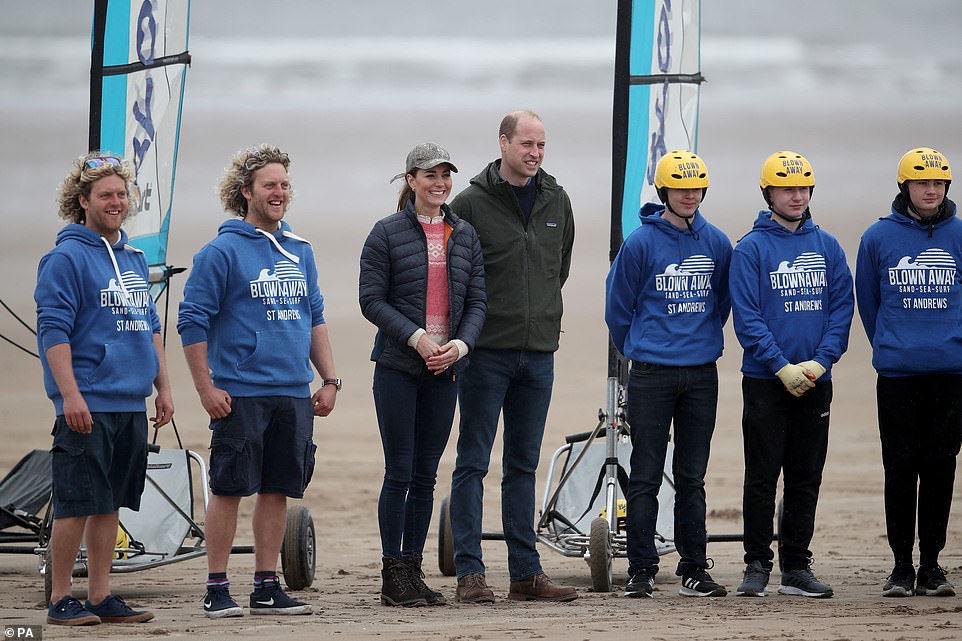 Important work: The royal couple were joined by a group from Fife Young Carers, which helps young carers maintain their well-being through a range of outdoor activities, workshops, and residential trips 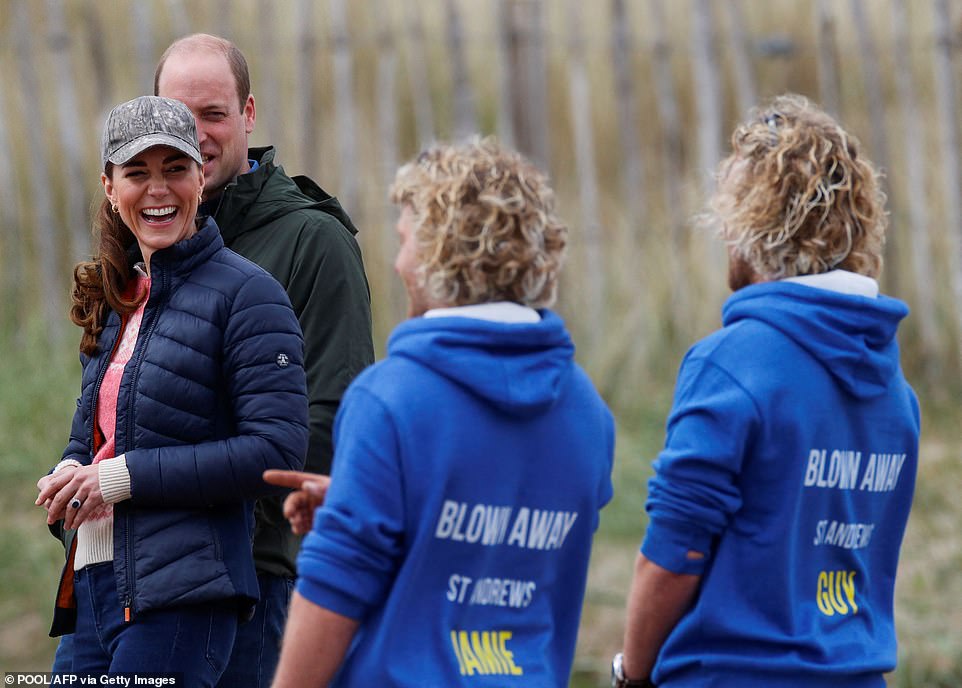 Beach day: The Duchess of Cambridge laughed while speaking to employees of activity company Blown Away

The Duchess of Cambridge wore a cap pulled down over her hair (left). Right, the royal learns more about Blown Away 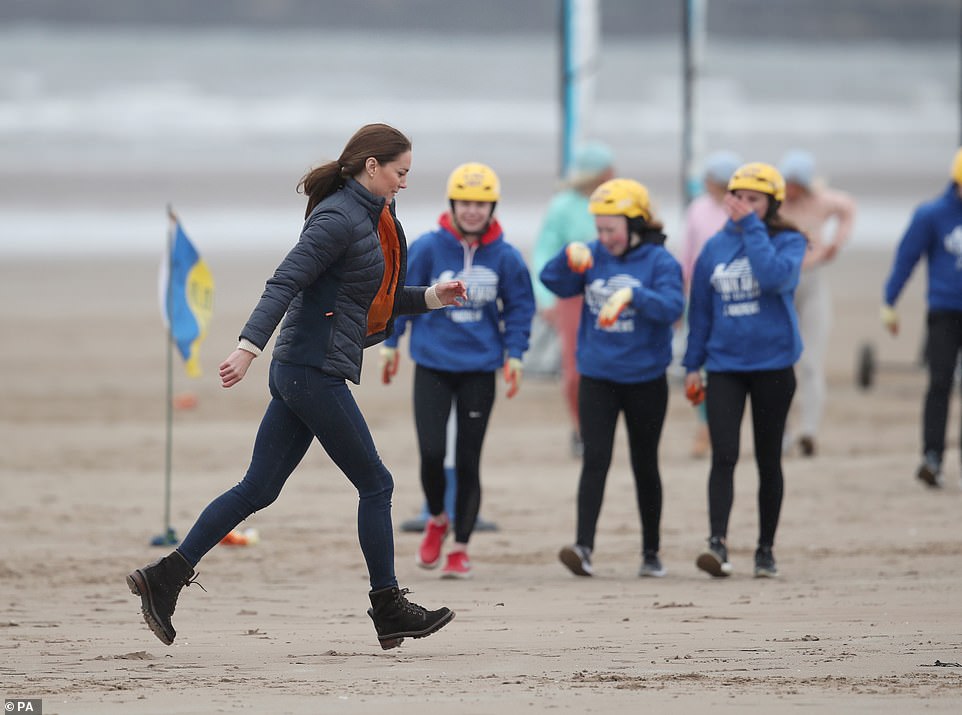 Quick sprint: The Duchess of Cambridge hurried across the rainy beach during the engagement this morning 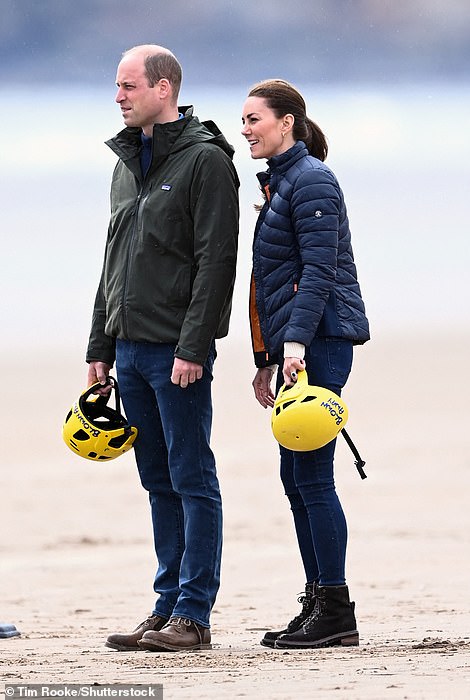 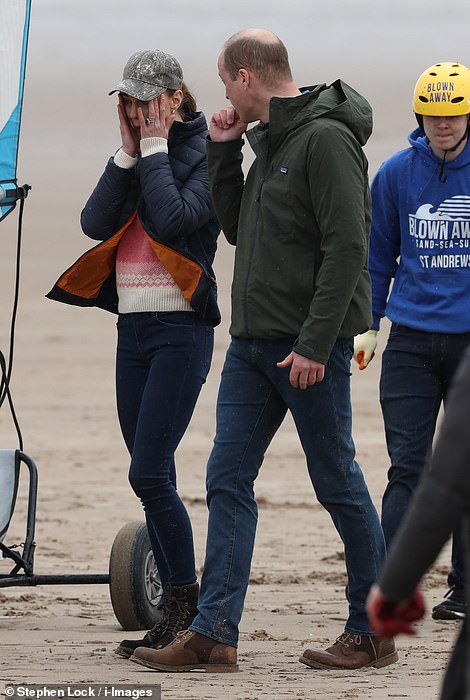 Challenging conditions: The couple had to wrap up in several layers for the outing. Right, Kate wipes her eyes 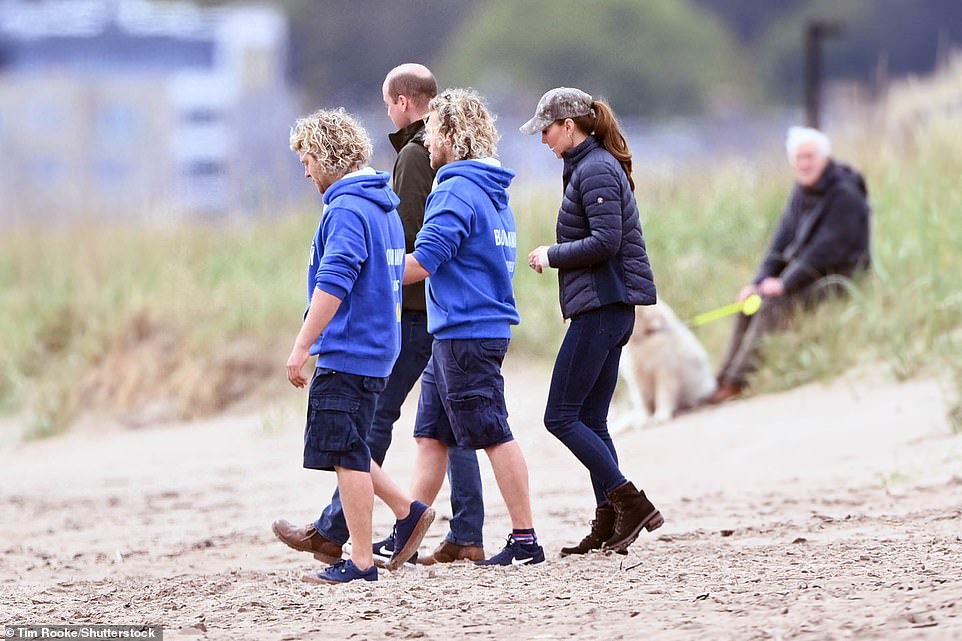 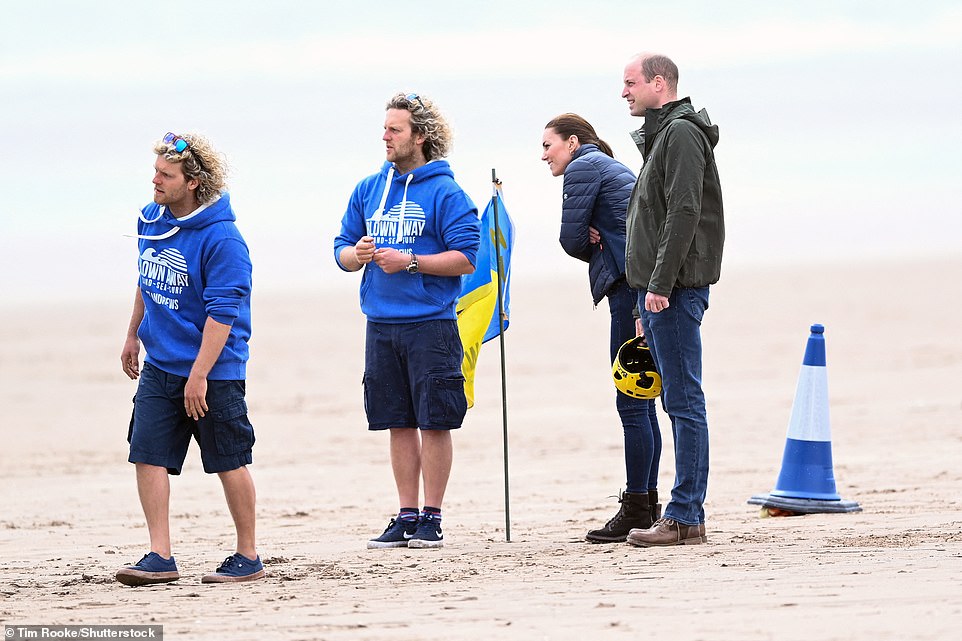 In the evening they were joined in the café kitchen at the Palace of Holyroodhouse, where they are staying, by Sikh Sanjog to prepare meals which will be distributed to vulnerable families across the Edinburgh community.

Over the weekend William gave a deeply personal speech in which he described the ‘special place’ that Scotland had in his heart, a country which he said held both some of his ‘happiest memories’ and his ‘saddest’.

It was at Balmoral where he learned of the death of his mother Diana, in 1997. And it was at St Andrews where he met and fell in love with Kate Middleton.