Kate Middleton is forced into self-isolation after covid scare

Kate Middleton is forced into self-isolation: Duchess of Cambridge was ordered into quarantine on Friday after day at Wimbledon ‘following contact with Covid-infected person’ – despite having BOTH vaccinations and NO symptoms – and will miss NHS tea party

The Duchess of Cambridge is self-isolating after coming into close contact with someone who has since tested positive for Covid-19, it was revealed today.

Kensington Palace has not revealed where or when exactly the contact was, only saying it was ‘last week’, suggesting it could have been when she visited Wimbledon on Friday.

The Duchess was joined by Wimbledon chief executive Sally Bolton and former British tennis player Tim Henman, before heading to the Royal Box where she seen speaking to a beaming Joe Wicks.

She was also pictured laughing and smiling as she prepped strawberry desserts at the All England Club.

Kate, who is understood to have had both covid vaccinations, also went to Wembley with William and George to watch England beat Germany on Tuesday.

“Last week The Duchess of Cambridge came into contact with someone who has subsequently tested positive for Covid-19′, her spokesman said, adding: ‘Her Royal Highness is not experiencing any symptoms, but is following all relevant government guidelines and is self-isolating at home’.

It is not known if the Duchess of Cambridge been alerted after being ‘pinged’ via the NHS app, a phone call from test and trace or if she was contacted personally by the person who tested positive.

The Duchess, who is self-isolating today, was joined by Wimbledon chief executive Sally Bolton and former British tennis player Tim Henman on Friday during a visit that may have forced her to quarantine at home 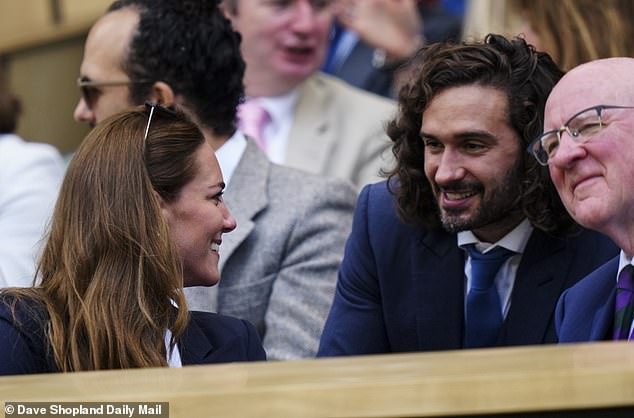 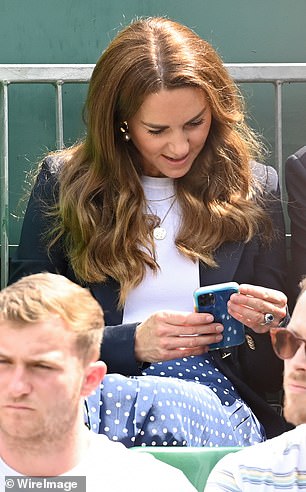 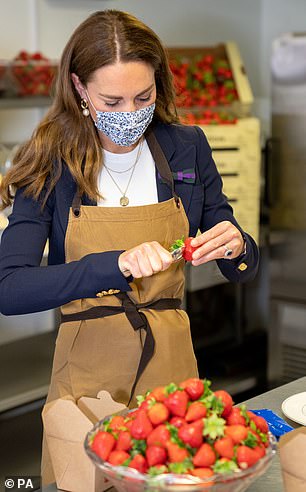 At one point the Duchess of Cambridge checked a mobile phone. It is not known if she was pinged via the NHS app. Later she prepped some strawberries to be eaten with cream

It means that William will have to lead and celebrate the 73rd anniversary of the NHS today, alone. The couple were due to attend a service of thanksgiving at St Paul’s Cathedral this morning before hosting an afternoon tea at Buckingham Palace.

But the Duke of Cambridge will now be flying solo.

Kate’s last public event was a visit to Wimbledon on Friday when she toured the SW19 sporting venue meeting staff in the museum, Centre Court kitchen and sitting with former tennis star Tim Henman to watch Jamie Murray play in the doubles.

The duchess is patron of the All England Lawn Tennis Club and a keen tennis fan but is now likely to miss the men’s and Women’s final at the weekend.

Her only other public engagement was at Wembley, but it is not known if she attended any other events last week.

William contracted Covid last spring and was able to carry on with telephone and online engagements while he was treated by royal doctors but was reportedly hit “pretty hard” by the virus and at one stage struggled to breathe.

The Prince of Wales also caught the virus during the same period but had milder symptoms although he did lose his sense of smell and taste for a period.

The Duke of Cambridge will celebrate the 73rd anniversary of the NHS at a service of thanksgiving before hosting a tea at Buckingham Palace – without his wife.

William was due to attend both events with Kate, but it was announced today the Duchess will miss the engagements after coming into contact with someone who has tested positive for Covid-19.

The Duchess does not have any symptoms but is following government advice and self-isolating at home.

The service at St Paul’s Cathedral will celebrate the NHS’s contribution to the country during Covid-19, reflecting on the work and achievement of health staff, volunteers and carers.

William will join guests including leading figures in the NHS pandemic response, several hundred members of frontline staff, and patients.

Later he will host the NHS Big Tea in the grounds of Buckingham Palace to pay tribute to the work of NHS staff who have gone above and beyond in tackling the pandemic.